It’s no secret that one of my favorite card games growing up was War. A simple game played with a standard deck of cards, my brother and I would regularly go head-to-head on a rainy afternoon. We have talked about a number of card games here on SahmReviews that are a variation of high-card-wins, each with their own take on the genre.

We recently stumbled across Major General – Duel of Time by APE Games at 2017’s Gen Con Convention in Indianapolis where it was making its debut. Designed for two players and arriving in a small, portable box, I erroneously assumed it would be another take on War. It was, but not the traditional War card game. More of a board game version of tug-of-war!

This cutely-illustrated game is designed to be played in around 20 minutes and features a back-and-forth battle between two Major Generals. The tri-fold board (can you believe there is a board inside this tiny box?!) folds out and is set between the two players, each at one end. Wooden cubes populate the board to set up the game and a random scenario card is drawn and read out loud. 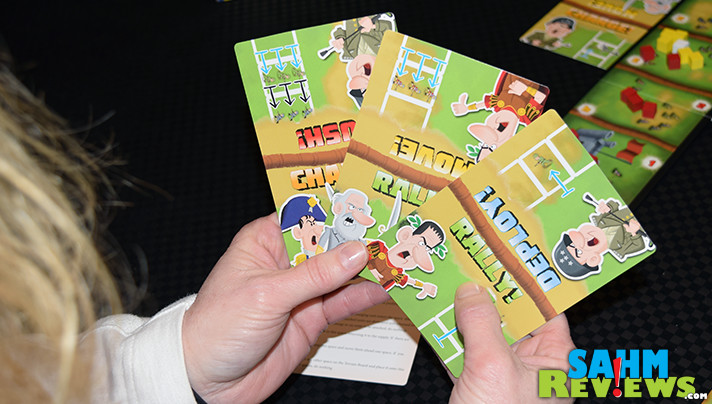 Each player has their own deck of oversized cards which are individually shuffled. Players work from a hand of three cards, drawing back up (if possible) at the end of their turn. On your turn your choices are few – play a card from your hand onto an ever-growing column of cards next to the board. Each card is exactly twice the size of one of the board’s squares and has commands facing both you and your opponent. You will select a card and set it into the column, lining it up with the squares on the board and covering other commands if you wish. You may set the card in either orientation, whichever works best for you. 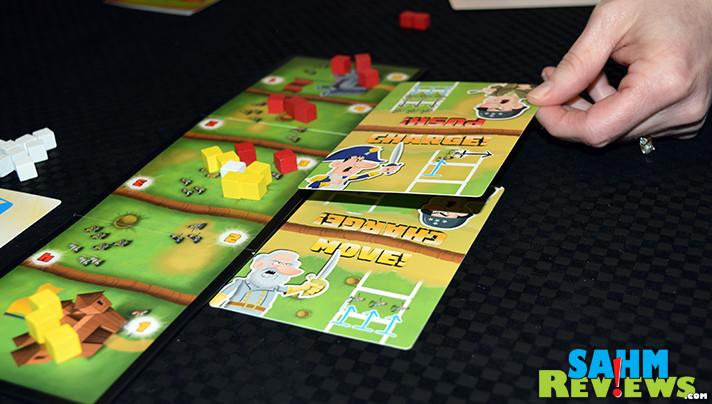 Then, from bottom to top, you will resolve each command (even if it isn’t to your benefit). Deploy allows you to add a new cube (unit) to the board in that space. Push uses one or more of your units to move forward and “push” an equal number of your opponent’s men one space back. 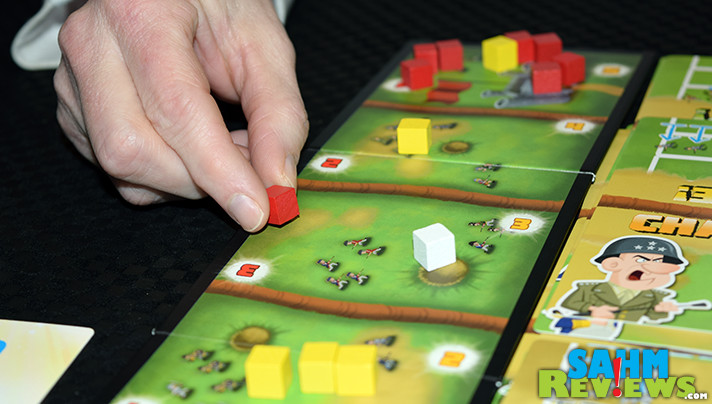 Charge sends one of your units running forward into the next space and attacking another unit (friendly or enemy) and removing them from the board back into the supply, while Sabotage simply destroys one in the current square. Move and Rally are the other two options, both allowing troop movements. 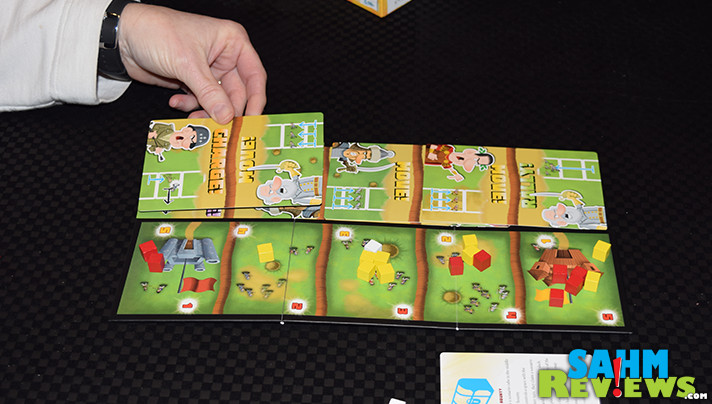 Any commands that are upside-down to you are performed by your opponent. Once all spaces have had their active commands resolved, turn moves to the other player who also adds a card to the command line. You will take turns, moving your troops into different spaces until both Major Generals have run out of cards to play. Scores are calculated on an area-control basis, meaning if you have more units in a square than your opponent, you receive points equal to the printed number in your color in that space. If an area is tied for control, neither receive points.

Along the way there has been a Scenario in effect that will allow you to collect Scenario points (white cubes) by fulfilling certain requirements. Each of these are also worth a point at the end of the game. Add these to your board score to determine the overall winner of Major General – Duel of Time! 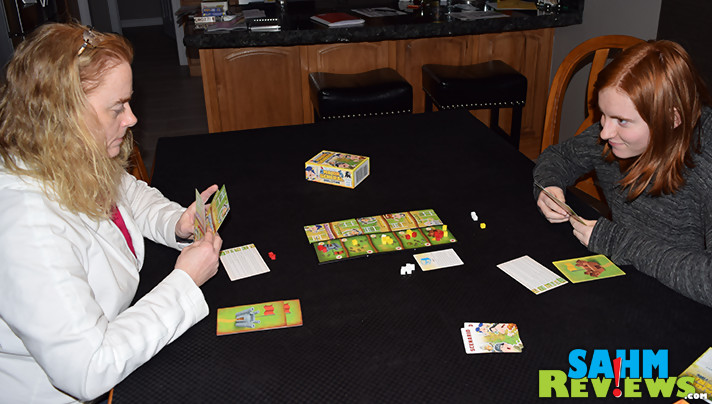 We found Major General – Duel of Time to be an elegant two-player game that is quick to set up and explain, but leads to a lot of thinking about your next play. The inclusion of scenarios means each game will have a different feel as your goals will change with the card drawn. And if you’re not a fan of cubes, you can easily grab some like-colored pieces from that unplayed game of Risk and give it the feel of a true battle!

Major General – Duel of Time can be found on Amazon for only $15 or direct from the publisher, APE Games. Be sure to check out their Facebook and Twitter feeds as they have a preorder up for a new Martin Wallace game you’ll want to find out more about it!

What is your favorite war-themed game?