We had always wanted to take our kids to Washington D.C. It’s such a long drive from Iowa and airfare is quite high from the Quad Cities to our nation’s capital. We had just enjoyed a fantastic 4-day stay in Columbus at Origins Game Fair and knew we were already half way to the coast. So we planned on continuing the trek east to spend an additional four nights in D.C. and taking in all the museums, landmarks and historical sites as humanly possible. 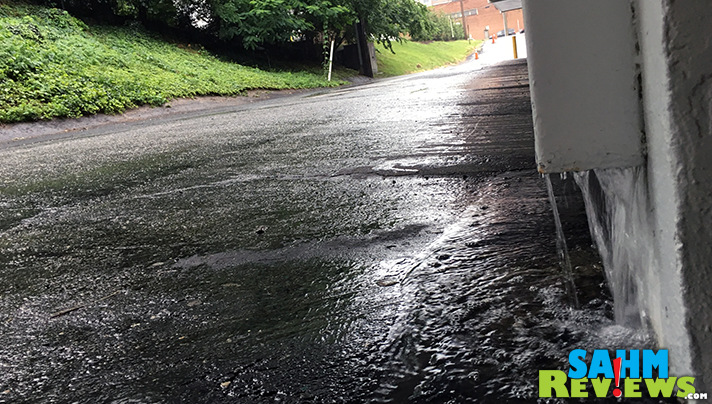 If you’ve ever visited, you know that Washington D.C. is best experienced via foot, especially the National Mall area where you’ll see the Washington Monument, the Lincoln Memorial and a plethora of Smithsonian Museums. We planned our outside walking for the mornings (and line-standing for the Bureau of Engraving and Printing) and went inside a different museum each day as the temperature rose outside. But one day Mother Nature got the best of us and provided the entire area with heavy rains and flash floods. Luckily it hit late in the afternoon, and after a wet walk from the Metro back to the hotel, we realized we would probably be in for the night.

We didn’t come all the way to D.C. to watch television and had a number of brand new games we were carrying with us from Origins – why not break one out! We needed something that wouldn’t take up too much space inside our hotel room, and since there were only two chairs we elected to set one up that accommodated two players and would only take about 15 minutes. The brand new issue by Arcane Wonders, Onitama, fit the bill perfectly! 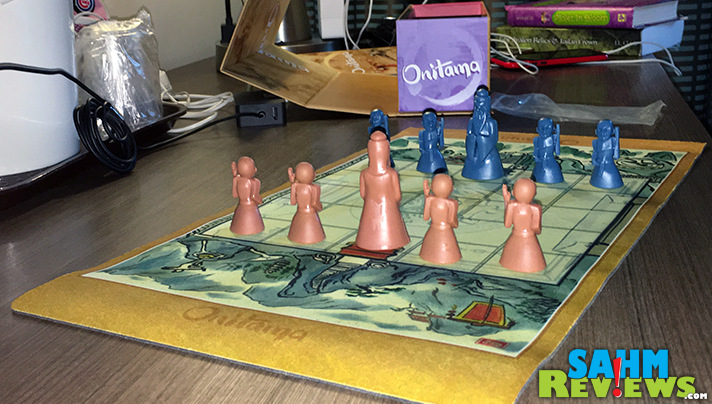 And you know we love our abstract games, so Onitama was the perfect distraction from the downpour all around us. At first glance you might think of it as a 15-minute game of chess and you wouldn’t be far from the truth. First issued in Japan two years ago, Arcane Wonders has brought it to our shores and just released it this quarter. Each person takes control of a master in his temple and four pawns attempting to either capture the other person’s master or get their own master into their opponent’s temple. 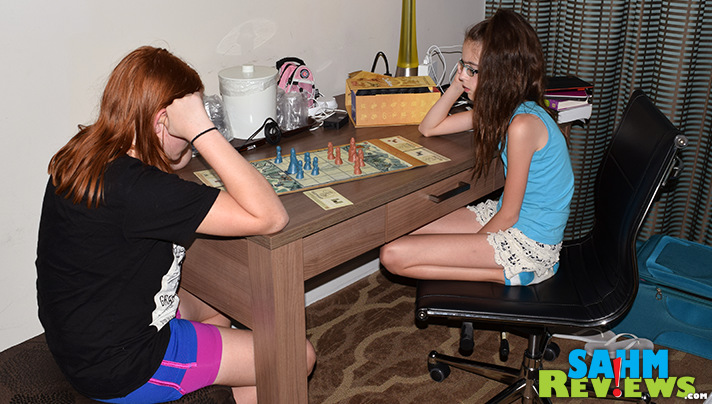 What makes Onitama different from Chess is you don’t have to remember how the pieces move. In fact, on every turn your allowed movements change depending upon which cards you have in front of you! The black square denotes the chosen piece’s starting position and the colored squares are its relative movement options.

Onitama includes sixteen movement cards, from which 5 are randomly selected for each game. Two cards go in front of each player, while the other is set to the right side of the board of the starting player. Conveniently, the starting player is also determined by this fifth card – it will have either a red or blue square in the bottom right corner.

On your turn you can move any piece according to the two cards in front of you. The card on the right side of the board will be the card you receive on your next turn, and whichever movement you take on this turn will be available to your opponent on his turn-after-next. Simply move your used card to the left side of the board (your opponent’s right) and collect your new movement card. Since you can see the movement you’re gaining, along with the two movements available to your competition, you are easily able to analyze your choices and (hopefully) avoid capture.

I also want to point out the unique nature of the packaging, one which makes Onitama a great choice for travel. First, the box lid rolls around the entire box – no lid to lose! And the game board isn’t board at all – it’s printed on fabric laminated neoprene (also known as mousepad material), so it rolls up into the box, yet lies flat on the table. Technically it is somewhat waterproof, another must-have feature of any travel game.

If you are even a little bit of a fan of abstract games, Onitama is a must-have. Not only was it a hotel room hit for us, it became an instant favorite of some of our friends at our weekly game night gathering. It can be taught in under 3 minutes, and multiple rounds can be played “best-of” style. I foresee this first printing selling out well before the holiday season, so do not hesitate if you want a copy for yourself. Arcane Wonders should have copies available at Gen Con this year, but make sure you get to their booth early as they will certainly be long gone before the end of the convention.

Find your copy on Amazon for under $30. If you’re a completest, you’ll need to track down a set of the promo tiles awarded as part of Dice Tower’s Kickstarter campaign that adds two additional cards to the mix. Sadly we missed out on them also – now we’re patiently watching eBay for a set to appear! Maybe I’ll get lucky and Arcane Wonders will give some away on their Facebook or Twitter timelines?!

It’s been just over a year since we first played Onitama on a rainy day in Washington D.C., but that certainly wasn’t the last. It is a regular staple in our game night bag and our go-to for when we need a quick 2-player game. It certainly has stood the test of time. 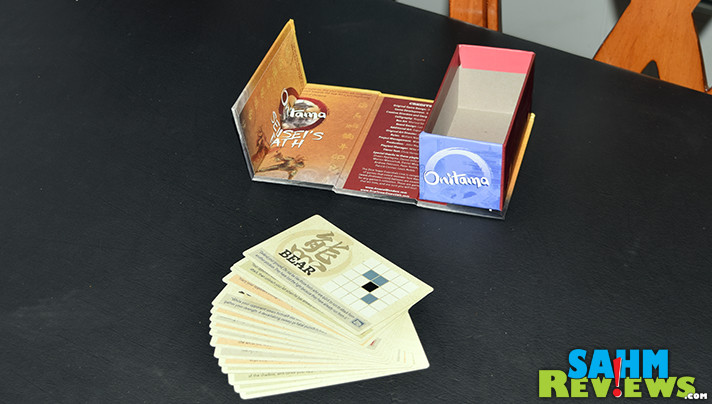 This past summer Arcane Wonders issued a quick-selling expansion to the base game, titled Onitama: Sensei’s Path. Packaged in a similar-styled lidless box, Sensei’s Path includes a brand new set of sixteen tarot-sized cards to be used with the original game. 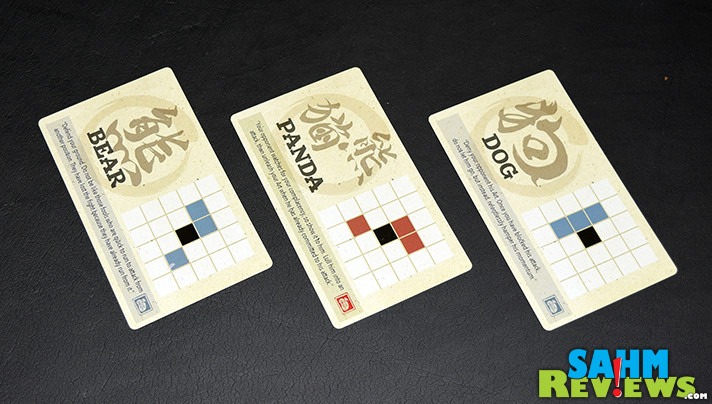 You can use this new deck as a full replacement to the original sixteen cards in Onitama, or choose to mix them in, creating a much larger pool of cards to randomly draw your five cards from. There are no additional rule changes, just additional cards to expand upon the variability of the game.

If you’re as much of a fan of Onitama as we are, Sensei’s Path is a must-purchase. There are copies currently on Amazon, but this is a case where buying the set directly from Arcane Wonders for $12.99 will probably save you a couple dollars. 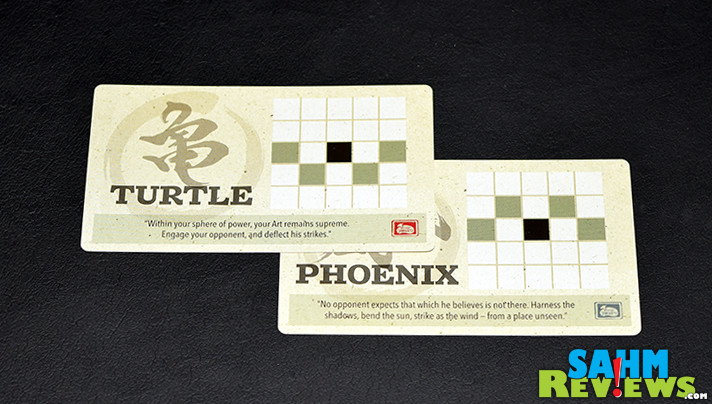 Now I have to keep an eye out for the limited edition promo cards issued by Dice Tower. The first two, Phoenix and Turtle, are included in Sensei’s Path. The newest, Goat and Sheep, can currently only be obtained through their Indiegogo campaign. Maybe that means another expansion is in the works?!