There’s an saying that you’re never too old to learn something. Oh, how true that is. As the kids have gotten older and we’ve traveled more, taken educational tours, visited more museums and taken more adventures, I’ve certainly learned a lot. Or maybe some of what I learned in my younger days and forgot is finally sinking in and sticking. At least for now. During a trip a few years ago to a natural history museum, I discovered that I was one of many people incorrectly identifying bison as buffalo. As I took a trip down memory lane reading an old post about Harmony Safari Park Zoo in Huntsville, Alabama, I realized my error. Needless to say, this re-dedication of that old post has those errors corrected. Feel free to correct me on other animals I mislabeled. 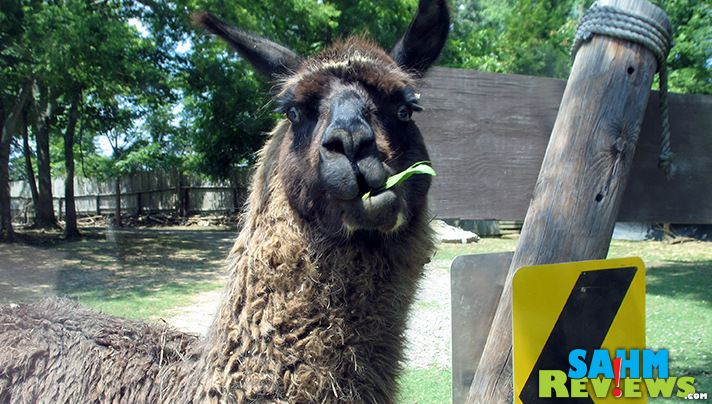 As I mentioned in my prior post about fishing, we recently spent some time visiting my MIL in Alabama. The trip wasn’t intended to be anything other than a chance for the girls to see their grandma. (And having an on-site baby sitter so we could go to dinner and a movie for our anniversary was a bonus.)

We spent a lot of time swimming and most of the time just relaxing, but the one very noteworthy thing we did was to visit a safari zoo.

You know how phonebooks have those “community” pages up front with maps and golf courses and points of interest? Do you ever look at it? Me either. Before this trip, anyhow.

MIL’s neighbor stopped by one day to deliver a pie. Incidentally, it was one of three desserts she delivered during our short visit and I personally blame her for the 5 pounds I gained while on vacation. Not the buffet and other dinners out, not the movie popcorn, not even the gummies that BIL brought over. Nope. One awesome blueberry cheesecake/coffeecake and two pies.

Anyway, after setting down the pie, Pie Making Neighbor immediately pulled out the phone book and pointed to a listing in that community section of the Huntsville, Alabama phone book. It said “Harmony Park Safari” with an address phone number and short description. It didn’t really say much and Pie Making Neighbor had never been there. She just said that she had driven by it and thought it might be something the girls might enjoy.

After she left, I headed to the computer to Google “Harmony Park Safari” and was surprised to find that they don’t have a website. (Surprisingly, as I repost this in 2016, they STILL don’t have a website.) I had a few hits through travel sites but no real meat that told what exactly the place was. By total coincidence, a blogger friend had been to Harmony Park Safari just the day before. Being overly concerned about the welfare of my car, I emailed Hillary and was delighted when she emailed back with nothing but positive things to say. 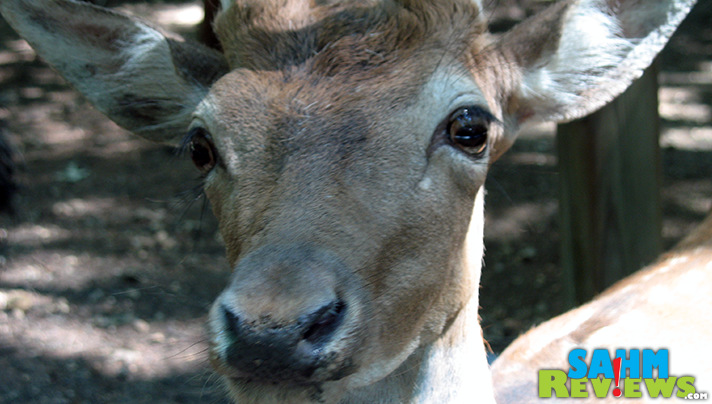 So we headed off to the safari zoo and were amazed at what was in store for us. When we pulled up to pay our fee, we could see the animals congregating on the other side of the fence. There was a fee for all of us, but with five paid admissions, we got a free bucket of corn. Since we were in a mini-van, there were only two of us with windows that opened enough to launch food. I can image how much more fun it would have been if we had more windows that could distribute food. 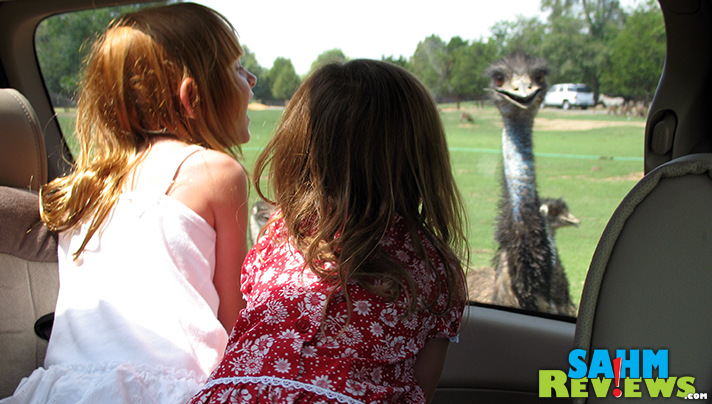 Although the animals are not tame, they certainly are used to being fed by random vehicles driving through their home. All the animals mull around your vehicle waiting for you to toss out some corn. Before entering the park, staff provided a warning and list of rules. They explain that you need to roll up your window quickly because the animals are known to put their heads in the vehicle. In the case of the camel, that is very dangerous. For that reason alone, the task of throwing corn should be restricted to adults and older children. 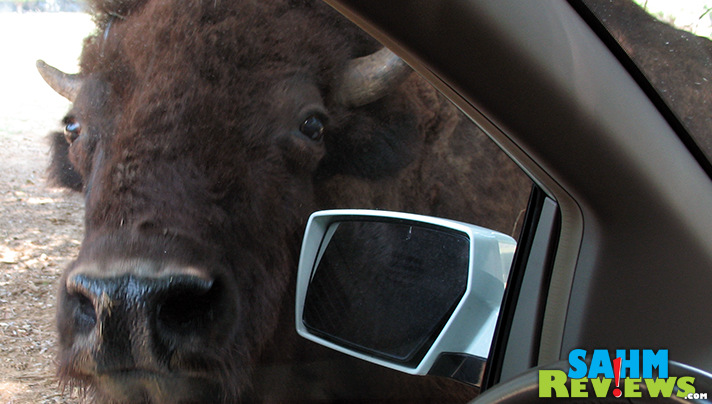 There was a great variety of animals at Harmony Safari Park. We were able to get some really exciting pictures – like of a bison (yes, I called it a buffalo when I originally posted this in 2008) crossing in front of vehicle then right up to our window. 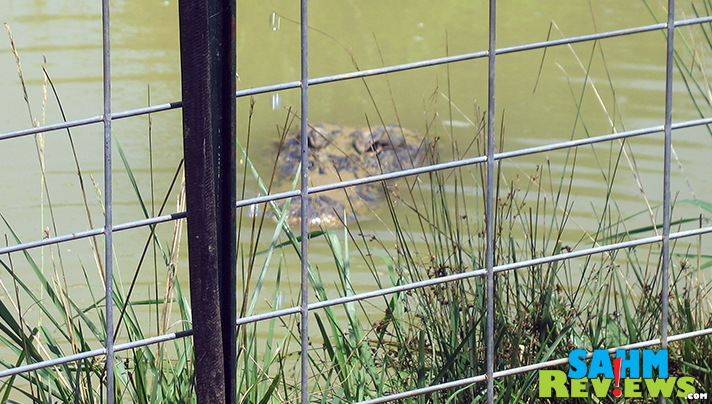 Or a shot of the ram following us around, right after butting the back of the vehicle. The alligator peeking out of the water. And of course, the turtle crossing the road. Kidding. 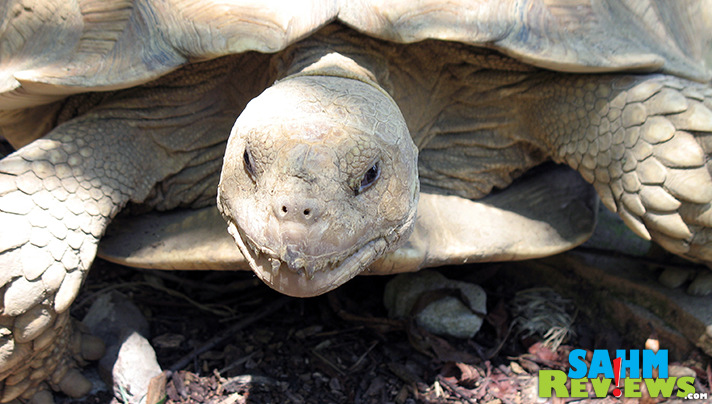 The tortoises were all inside a pen that we were allowed to walk into. Just wondering if you were still paying attention. There was one monkey in a cage but aside from the alligators, the rest were roaming freely. (Wouldn’t have much of a zoo left if the alligators were uncaged, right?) From the time we drove through the gate, we had plenty of attention. The camel never came near our vehicle; he was busy grazing in a field nearby. But as you can see from the pictures I HAVE included, several other animals did. 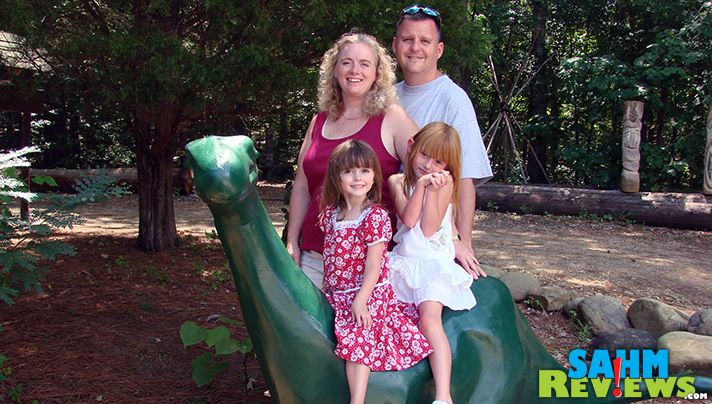 At the end of the tour, we were able to get out of our vehicle for some photos opps and to see additional (safe) creatures wondering the property. From what we were told, there are only 19 of this type of safari zoo in the United States. It was a lot of fun and if you are ever in the vicinity of one, it’s worth a stop. Everyone in our car thoroughly enjoyed this adventure.

Have you ever visited this type of safari zoo?