When we started planning our trip to Washington D.C., people consistently informed us that pretty much everything is free. No charge to see the monuments. No fee to get into the Smithsonian. Even a tour of the Bureau of Engraving and Printing is free.

Everything they mentioned is exactly what we had planned to do anyhow. Prior to our trip, Scott and I sat down with the girls and asked what they wanted to do and see and those were the top items. Walk through a Smithsonian or two, visit some monuments and see money being printed. Everything on their list was free and didn’t require much scheduling. Did I mention I like free?

Most of the museums close at 5 pm; the Bureau of Engraving and Printing offers tours running all day, but requires tickets (available on a first come-first served basis). Our goal was to keep the trip laid back and casual so our only plan was to get to the BEP early in the day.

We booked a small hotel in Arlington with a short walk to the Metro. Each day during our three-day trip, we would get up at our leisure (we’re on vacation, so why not?), grab a quick bite at the hotel’s continental breakfast, catch a train to the tourist district then systematically knock out the items on our list.

On our very first day, we headed straight to the Bureau of Engraving and Printing. To our dismay, when we arrived at the tour entrance at 10:40, we were greeted by a sign that said tickets would need to be picked up at the front of the building. A five-minute walk later, we discovered a sign at the box office that said tickets for the day were spoken for. A woman who was passing by said she had arrived before 8 am to an already existing line with more forming behind her. We used our time on Monday to see memorials and visit the Natural History Museum instead and vowed not to make the same mistake on Tuesday.

So Tuesday we set our alarm, got up early and arrived at the box office around 7:45. The box office hadn’t opened yet so we were confident, even with the line, that we would be able to get tickets. By the time we arrived at the front of the line, some of the time slots were already filled. The list of available slots were displayed on the window where we had found the “sold out” notice the prior day. We grabbed the earliest slot and headed to the tour and visitor’s center entrance on the opposite side of the building.

Upon entering, we were greeted by security and a metal detector. I was concerned that our cameras would be confiscated since no photos are allowed on the tour. My concerns were unwarranted as they simply informed us we weren’t allowed to take pictures or video once we proceeded upstairs to the tour area. 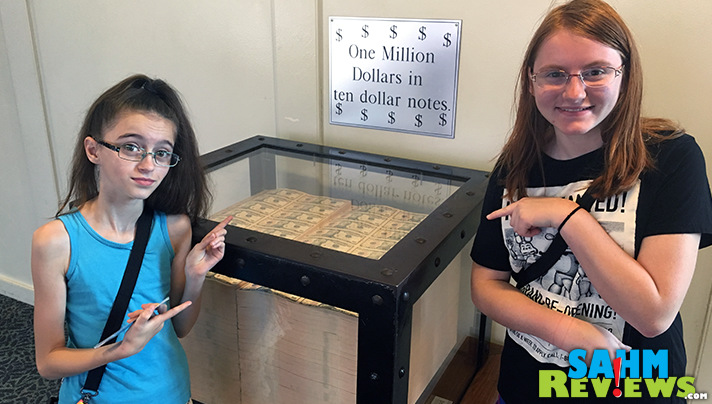 While we waited for our tour to begin, we were able to read quite a bit of history about the process and changes in currency over the years. Probably the most stunning display was the stack of bills totaling one million dollars. Our tour officially began with an informative video in a seating area at one end of the visitor’s center corridor.

During the no-photos-allowed portion of the tour, we were able to witness a variety of bills being printed including 5s, 10s and 20s. One of the stations was in the setup phase but the rest were all working as normal. If you go on the tour, pay particular attention to signage around the printing areas. We found signs announcing “free samples – tomorrow only” along with some head-spinning signs claiming “Imagine how I feel. I just printed my lifetime’s salary in a few minutes.” One gentleman played to the crowd by fanning himself in money and holding up a sign proclaiming “I love my job.” The tour itself was quite short but informative. 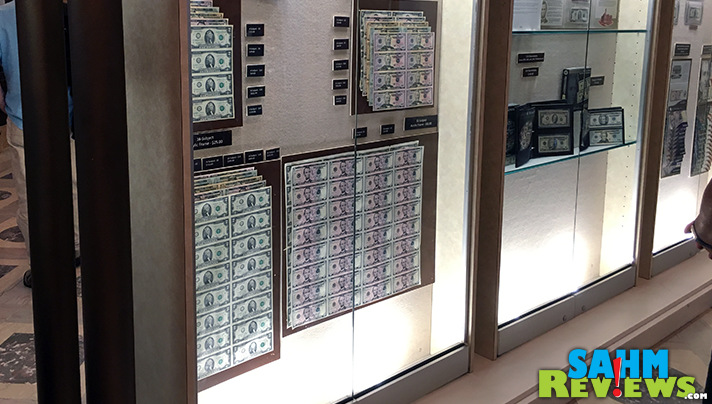 Bureau of Engraving and Printing tours wrap up in the gift shop where visitors can purchase souvenirs. On our last visit, we purchased an uncut sheet of $2 bills. It cost us more to frame than it did to purchase, but is a great conversation piece on our wall. Souvenirs range from small trinkets, coin purses and hats to specialty items such as “Lucky money” and Red Envelope currency. A little something for everyone.

If the Bureau of Engraving and Printing tour is on your Washington DC to-do list, plan to get up early and get your tickets. It’s definitely a case of “the early bird gets the worm.” Or in this case… a view of money being made.

What’s would you want to see on a trip to our nation’s capital?

21 thoughts on “Learn How They Make Money. Literally.”