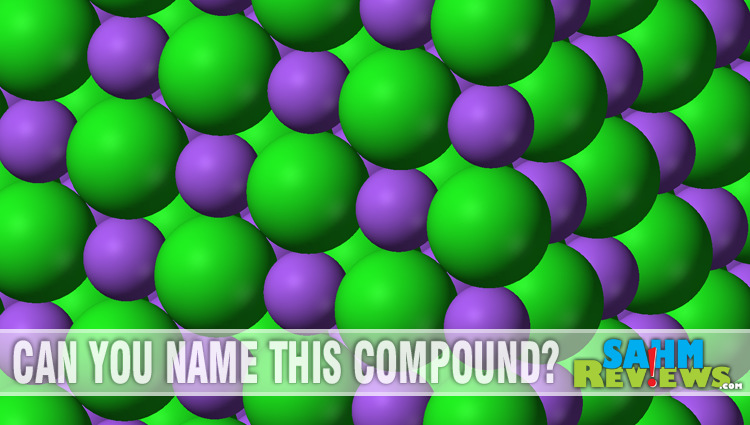 By this time next week both of our girls should be settled into their new school schedules. They’re both at the same school this year, which won’t happen again until 2018 when our youngest hits high school. After a great summer of visiting Washington D.C. and attending three game conventions, I’m not sure they’re happy about returning to the classroom. Me? School can’t start soon enough.

If there’s one thing we learned from Madison’s first year of Jr. High, it is that science gets real serious at this stage. It’s more than bubbling volcanoes and classroom pets – now they’re getting into real science principles and activities. Memorizing the periodic table and dissecting larger mammals are on the slate. As is discovering atomic-level principles and how our universe is held together by different elements. 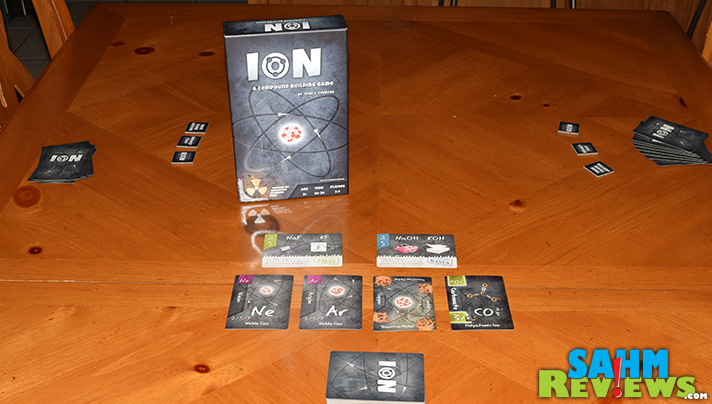 So when we discovered Ion by Genius Games, we knew it would be a great tool for preparing the girls for the year’s science assignments. You might remember them from a couple other similar titles we featured earlier, Peptide and Linkage. Both of them helped solidify basic scientific principles and we were hoping Ion would do the same. We were correct. 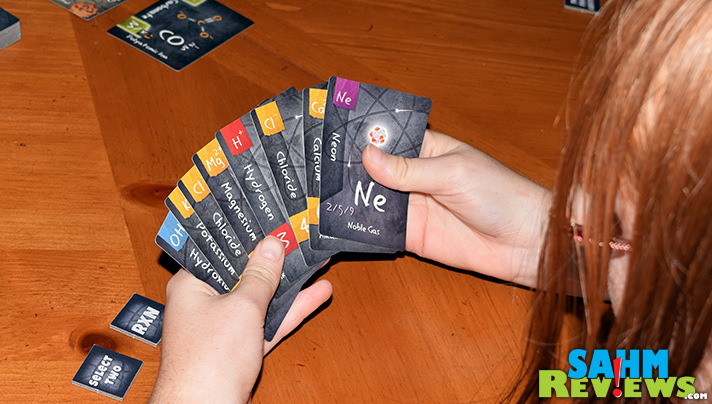 Your goal in Ion is to build neutrally-charged compounds by drafting cards from your hand. Each player is dealt a hand of eight cards, choosing one and laying it face down in front of them and passing the rest of their hand to the player on their left. Once everyone has chosen a card, they are flipped over and played face up in front of each person. 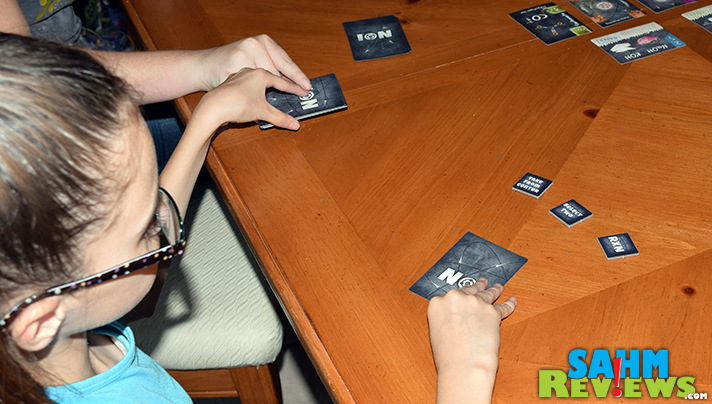 Every card has a charge value in the corner – either negative, neutral or positive. The revealed card must be either set alone in its own area or added to another element, hopefully making the sum total of zero (neutral). For the round, continue drafting one card at a time until there are only two cards left in your hand. This signals the end of the round (six cards played). 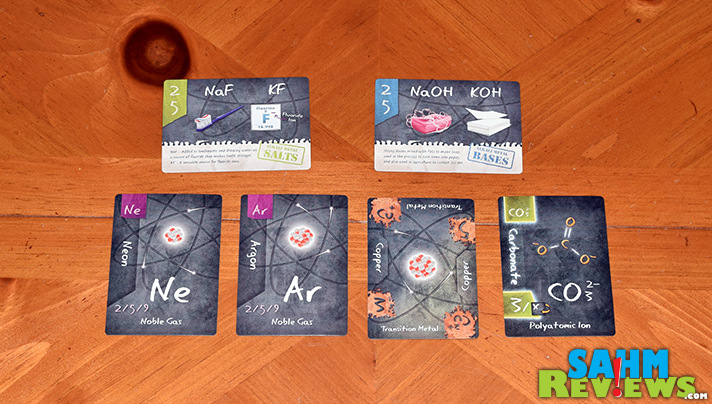 Score points for each successful neutral compound created. There are also noble gases (without a charge) that can be collected on their own. Receive points for putting together sets of different gases. During each round two (or three, depending on the number of players) Compound Goal cards are on display for everyone to see. If you manage to create one or both of the compounds on the goal card then you will also be awarded additional points for their completion. 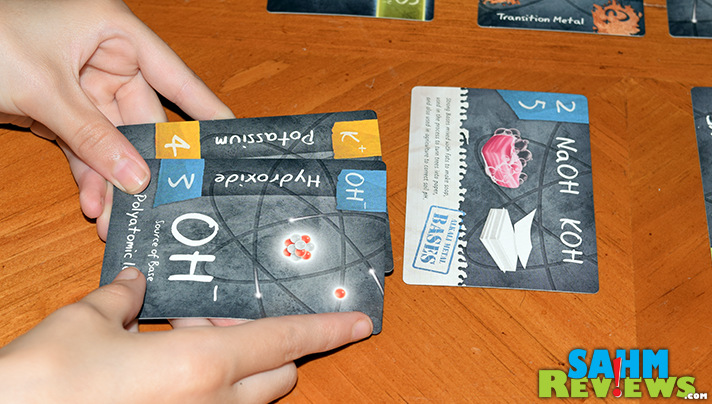 To mix things up, Transition Metal and Polyatomic Ion cards add variety into the game. The former can be rotated to alter the charge applied, while the latter gives you the option of receiving points OR reactivating one of the Action Tiles in front of you. But this comes at a cost of victory points at the end of the game. 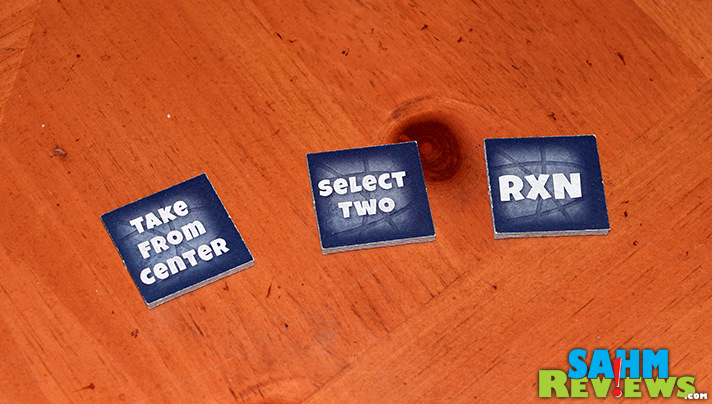 The action tiles give you one-time bonuses, such as taking two cards on a turn instead of one, taking a card from the pool of cards in the center or even rearranging your previously-played cards to optimize your scoring. Using a Polyatomic Card to be able to reuse an Action Tile might be just what you need to turn the tide of the game! 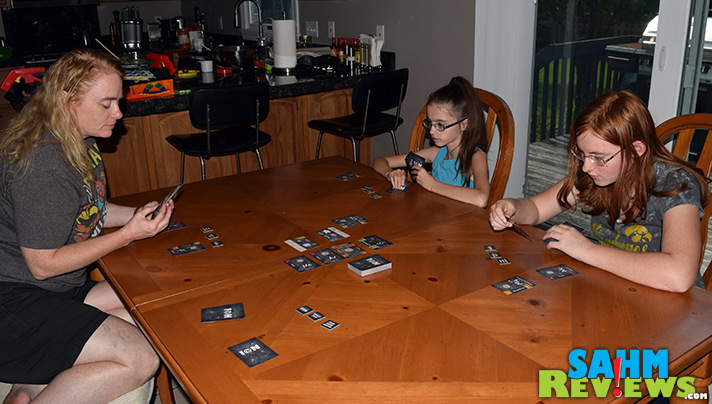 Ion also includes an optional expansion which introduces Radioactive Cards. These special cards are another card to ‘collect’, but you only get to keep them when no one else plays one at the same time. Choosing when to play becomes as important as which card to select. Choose incorrectly and receive zero points for your efforts and in effect waste your turn!

Want to see a great tutorial put together by the creator himself? Check out this video – there’s no better way to learn than from John Coveyou, the game’s designer!

Ion is a perfect solution for teaching the basics of the elements and how they combine to construct specific compounds. You will find your copy on Amazon for under $25 or buy directly from Genius Games via their website! We hear rumors of another science-themed game in the works, so watch their Facebook and Twitter feeds to make sure you’re in-the-know!

To quote Mr. Coveyou, “Why learn science when you can play science?!”. Wouldn’t you have loved to learned science this way?