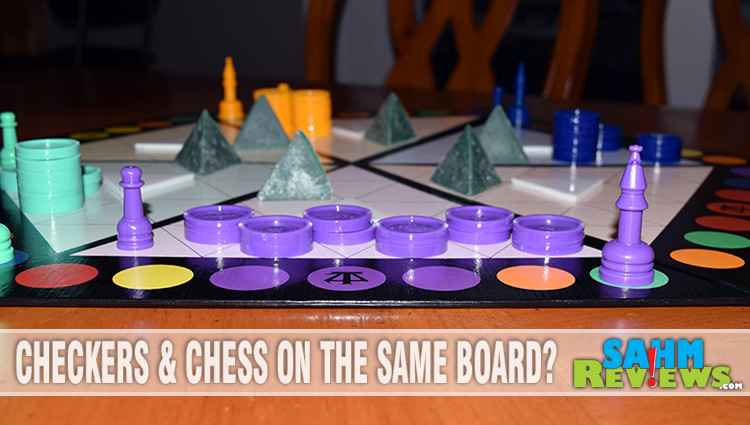 One thing I always keep an eye out for when game shopping is older titles that might fit into my collection. In particular I love finding late century abstract games, and they can usually be had for pennies on the dollar. This year while at Origins Game Fair I happened across a booth displaying a unique title from the late 70’s – Bin’Fa.

Turns out I actually learned something that day. Bin’Fa was originally self-published in 1977 and only 500 copies were made. The concept was picked up a couple years later by strategy game powerhouse, Avalon Hill and renamed “Hexagony” (which I still need for my bookshelf collection). It was a mediocre seller for them, and a few years later Avalon Hill decided to drop the copyright and have it revert back to the original creator. 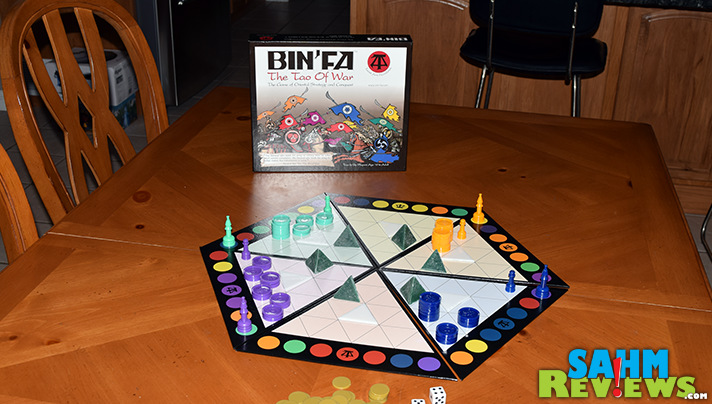 Fast-forward three decades and the family of the original Bin’Fa creator has updated the rules and artwork and now offers a very engaging six-player abstract game that just barely resembles the original. Oh sure, the basic concept of the game remains the same (capture your opponents’ pieces), but with the addition of new pieces, obstacles and a modular board, this 21st century version is much greater than the previous incarnations. 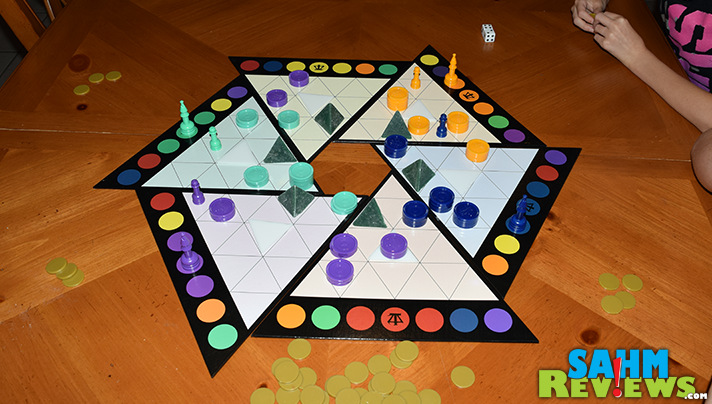 The first thing you’ll notice is there are six boards. Not one big board, but six identical triangles that can be arranged in any form agreeable to all players. This alone gives you almost unlimited configurations, but now there is the addition of both landscape obstacles and portals that guarantees every session to be unique.

Each player begins the game with twelve armies (checker pieces), a General and a supply marker. Bin’Fa requires you to not only move your units to capture opposing pieces, but you also have to be able to supply them. On the outside of each triangle exists a supply line track which everyone’s supply markers will travel.

When choosing to gather supplies, roll both included dice and move your supply marker along the track. You may choose to move the result of either die OR the sum total of them both. Land on a space matching your color and receive supply tokens equal to the number of spaces just moved. Obviously rolling doubles only gives you two movement choices, so once completed you may roll again (and move again). Keep doing this until you don’t roll any doubles.

If your supply marker lands on another army’s home base (the middle spot on their board), you also collect tokens equal to the spaces you just moved. However, this time instead of collecting them from the ‘bank’, you can choose to steal the supply tokens from that opponent!

Lastly, you are also awarded supplies for the number of spaces moved if you land on a color in which you have an army in the corresponding territory. So you can increase the odds of obtaining supplies by having troops in multiple sectors, but risk capture by spreading yourself too thin. 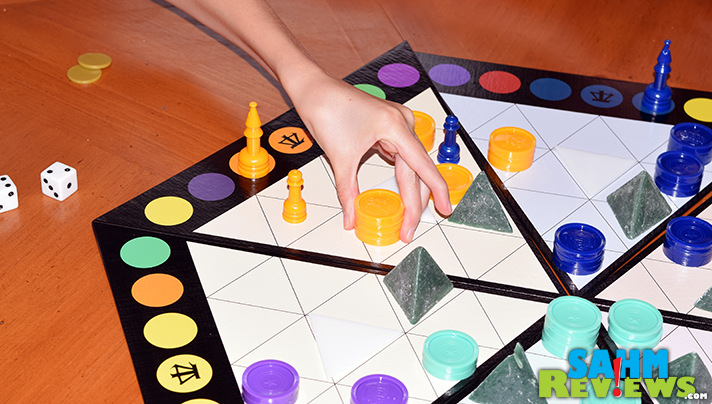 Your other action choice is moving, which obviously is needed in order to capture pieces. Pay the previously-mentioned supply token and roll both dice. The difference between the results is the number of spaces you can move (doubles ends your turn as the difference is zero).

Movement is counted by spaces, regardless of how large your stack is (a 12-army stack moving one space counts as one, as does a 2-army stack). For example, if the difference is three, you may move one stack three spaces or three stacks one space, and anything in-between. 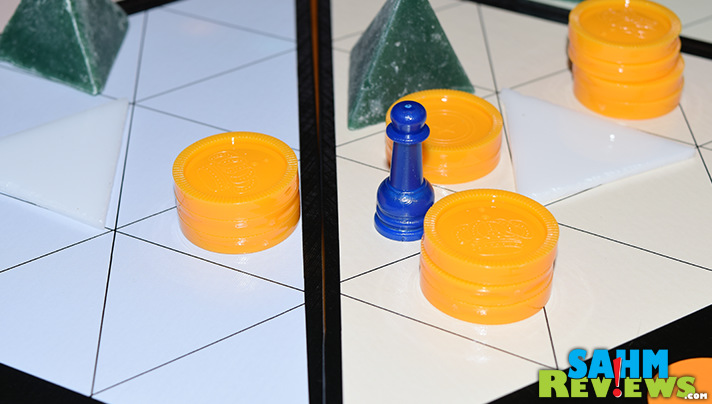 To capture enemy units, you do not simple land on them as in most other abstract games. In Bin’Fa you must completely surround them with your own armies and/or utilizing the terrain, the edge of the game board or even other army units belonging to another player! Once a player is reduced to four army units (or two units plus their general), they immediately surrender and are removed from the game. Obviously, the last person standing wins!

Don’t think Bin’Fa is just about trapping your opponent in a corner – they have the ability to push back. By moving an army stack larger than yours, they can attempt to dislodge (push) your armies by rolling a six on either dice. Let’s just hope they don’t push you off the board, forcing your armies out of the game! 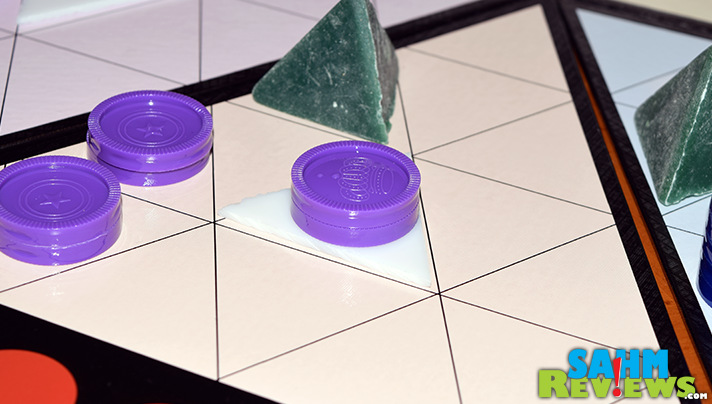 Lastly, there is terrain that gets in your way and vortexes that aid your movement. Think of terrain as unused areas on the board where you cannot move. Vortexes are portals that link to you other parts of the battlefield. As with all advanced technologies, there are risks. When you enter the vortex, your turn immediately ends and all armies are held there until you are able to move out. On your next turn, you must exit the vortex by rolling both dice. Simple move the difference as if it were a regular turn. However, if you are unlucky enough to roll doubles when trying to exit, those armies are lost forever to the netherworld! 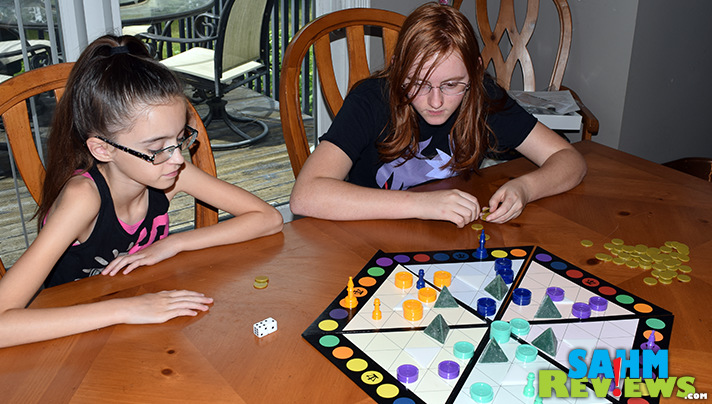 We’re always excited to see well-done games being self-published and hope they are eventually picked up by larger publishers who can upgrade the components and lower the costs thanks to larger order quantities. Bin’Fa operates fine as is, and is a decent value at the MSRP of $38. I personally would love to see a version that doesn’t use pieces that resemble checkers and chess pawns – I may have to grab some from my GIPF collection and make those work as a substitute!

What 70’s era game would you like to see reissued?