You’ve probably come to realize we like to push the envelope with games and projects for our girls. We’re firm believers that there is a solid place in the world of math, science and engineering for both sexes. Whether they’re learning to compose their own music, building objects to save us from zombies or streaming educational documentaries on Netflix, we try to keep them engaged with new challenges and experiences in areas not traditionally considered a “girl thing”.

Both of my daughters (11 and 12) have been bringing home science homework that I remember doing in high school. I guess it is good they’re being introduced to more advanced topics earlier, but it sure does make it difficult to help them with their assignments when I can barely remember what I had for breakfast. What if there was a way for us ALL to learn at the same time, and while playing a game? That’s exactly what we found in this very cool card game from Genius Games – Peptide: A Protein Building Game!

Don’t let the heavy science theme fool you; underneath it all Peptide is an enjoyable card game that will also teach you a bit about amino acids and peptide chains. 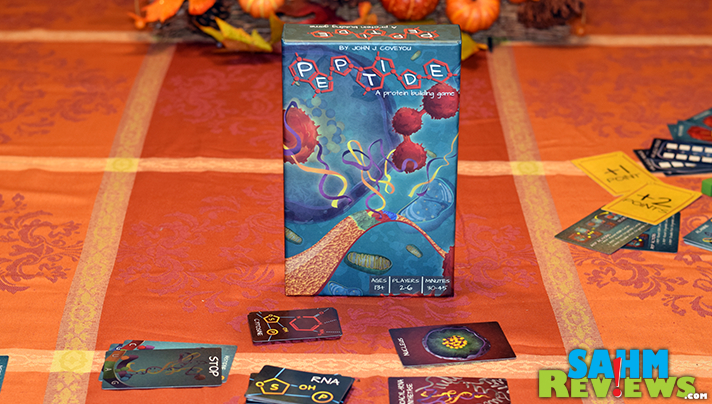 Peptide is designed for 2-6 players, ages 13+ and estimated to take around 30-45 minutes, but really should be able to be enjoyed by kids as young as 10. The game is playable even if you don’t have a prior grasp of the chemistry behind the game and will familiarize your child with the terminology they’ll encounter very shortly in their science classes. 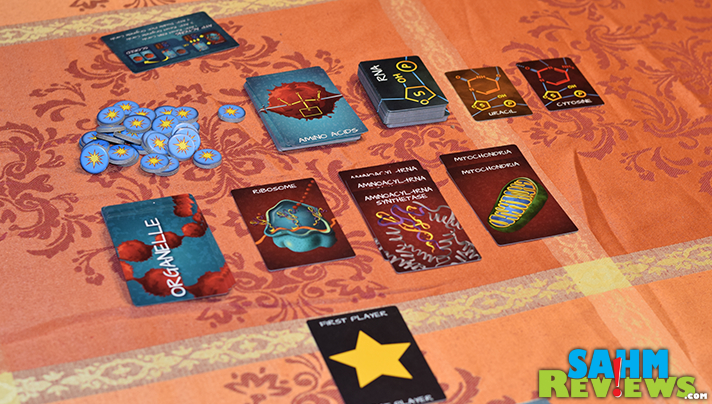 The play area is set up with draw piles for Amino Acids, RNA Cards and Organelles. Each round a number of Organelle cards are dealt out equal to twice the number of players. Every player in turn chooses one of the available cards, then a second after everyone has received their first. These cards represent actions to take, so you will be limited in your choices depending on which cards are dealt. 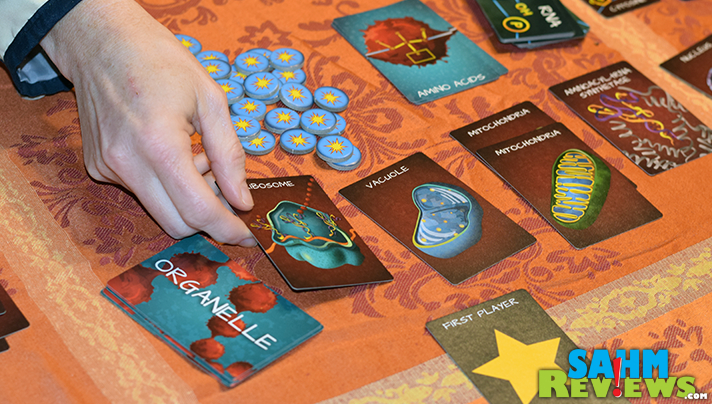 As an example, the Mitochondria awards you with two ATP energy tokens. Choosing the Nucleus allows you to either select one face-up RNA card, or draw two from the pile and keep one (discarding the other). 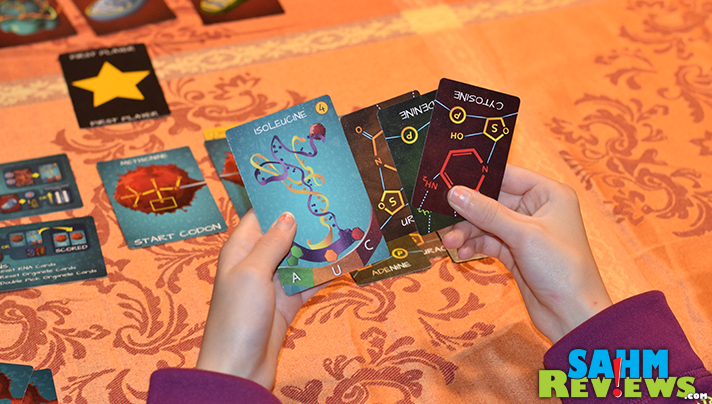 The AminoAcyl card requires you to pay two ATP tokens, but allows you to draw two Amino Acid cards, selecting one to keep and putting the other back on top of the pile. These cards have a ‘recipe’ on them which you are trying to complete and gain their corresponding victory points. 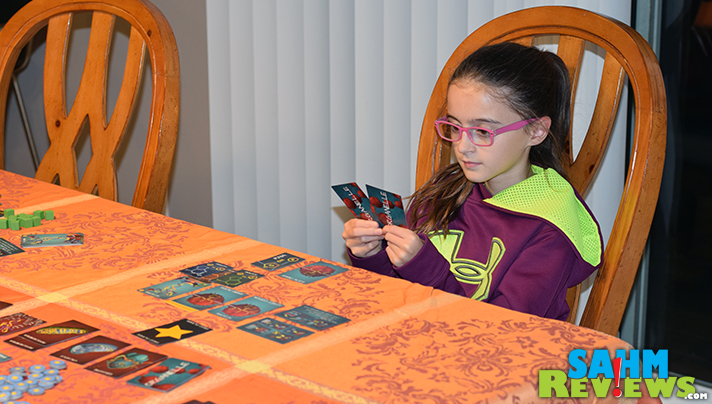 Once you have collected the correct RNA cards to complete the recipe on the Amino Acid card, you will then need to get your hands on a Ribosome card (twice). Once to place it in your chain, the second time to score it (discard the RNA cards and flip over the Amino Acid card).

Have I lost you yet? Don’t worry, thanks to handy ‘cheat’ cards, you will always have your options available to you at your fingertips. 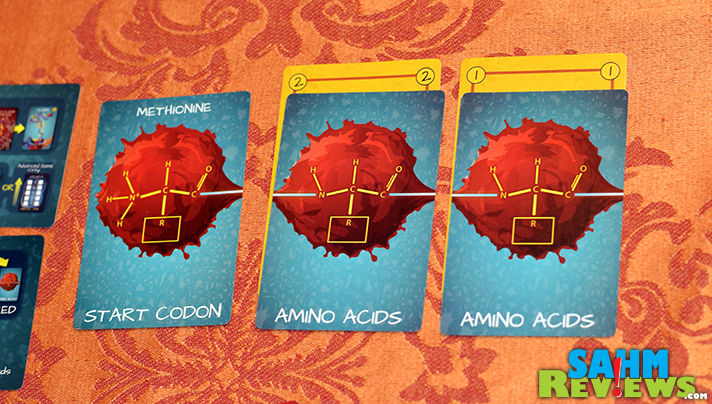 Ultimately you’re trying to complete as many of these acids to form a Peptide Chain. The longer your chain, the more points it will be worth at the end. Certain acids are more difficult to collect, so are accordingly worth more victory points.

Peptide can be boiled down to a recipe-collection game, but one that requires good money management (and a bit of luck of the draw). The biology is presented in a way that is not overwhelming, but also not dumbed-down. Getting a feeling of how the RNA Translation process works and using the correct terminology should be the ultimate goal with Peptide. The kids (and you) won’t even realize you’re learning!

For under $25, you get both a well-done card drafting game and a learning tool for everyone in the family. This would make a fantastic gift for the budding scientist or for someone who already has their PhD. Genius Games has a number of other science-related titles to fit almost every field of study. Whether you want to build compounds or molecules or play around with DNA, you should be able to find a perfect theme for yourself or family member. Be sure to follow Genius Games on Facebook and Twitter to see what their next “experiment” will be!