One thing I’ve come to realize is you can get a general sense of how popular a game is (or was) by the number of copies we see for sale at our local Goodwill. For someone looking for a copy of Yahtzee, Monopoly or Scrabble, thrift is definitely the way to go. At a buck or two, even with missing pieces you can always buy a second copy and have a full game plus a bunch of extra pieces! Plus you keep it out of the landfill!

There is one game we consistently see over and over again, and it was one that I had never played or seen. Tripoley is generally believed to be a variation of Poch, a game traced back into the 1400’s. Long in the public domain, this modern version has been issued (and reissued) by a number of different publishers. It appears there was a spike of popularity in the 60’s/70’s and again in the late 90’s, judging solely on the number of issues during those periods. 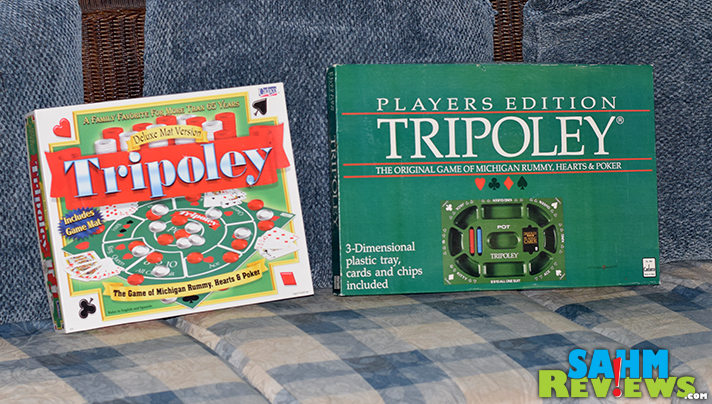 Embarrassingly, I ended up buying two copies of Tripoley. Not because they were missing any pieces, but because the two versions were made differently. The Deluxe Mat Version was from the late 90’s, included a pre-printed felt game mat and is still offered new today. The Players Edition from the late 80’s included a 3D plastic tray in lieu of a mat. Both sets come with a standard deck of card and bidding tokens.

Tripoley is played over three rounds, each representing a variation on the traditional card games of Hearts, Poker and Rummy. In the beginning of the game all players must place chips on every segment on the board (9 chips in total) even if there are already chips on the board from previous rounds. Then the dealer deals the deck of cards to all of the players, plus an additional hand that does not belong to anyone. It is possible that some players will get more cards than others. All rounds are played with the same hand of cards. 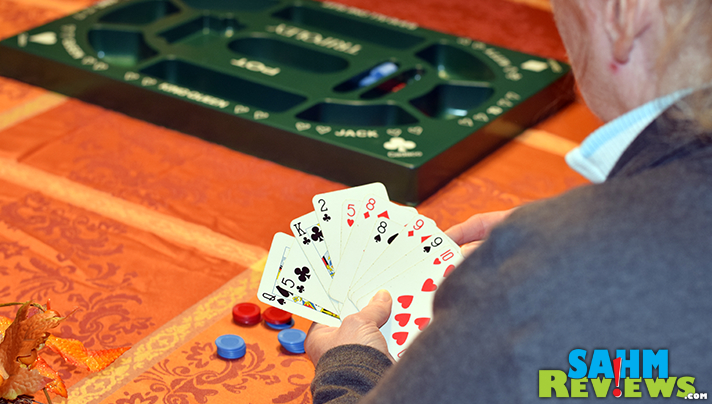 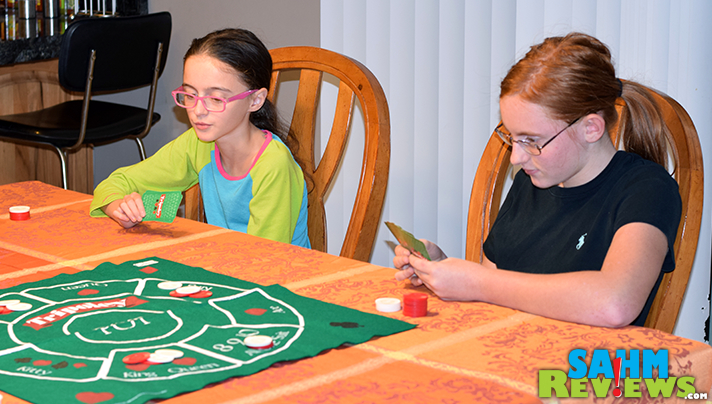 Next, players choose the five cards in their hand which make the best poker hand. Dealer bets first, then each player going left around the table can either fold, raise the bet, or call the bet. All players must meet the raised bet or fold. When the last player calls the bet, the player with the best poker hand wins all the chips in the “Pot” section.

All players pick up their cards, putting their poker cards back together with the remainder of their hand, and play a game of Michigan Rummy. The winner of the pot in the poker stage begins the play by playing a card face up in front of them. The card led can be of any suit, but must be the lowest card that they hold in that suit. 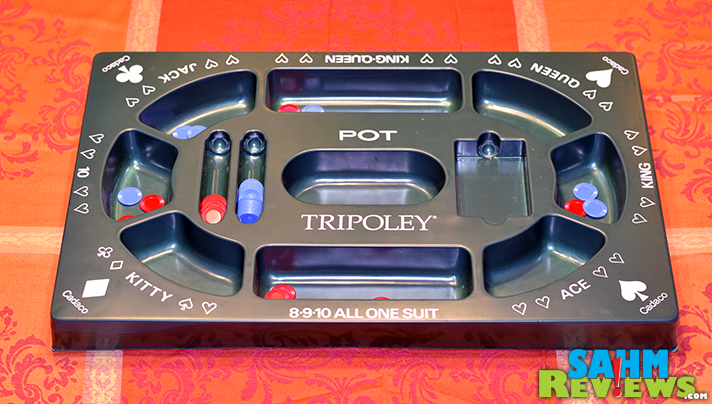 When the end of the sequence is reached, the player who played the ace or stop card begins again. They can lead any suit except the suit just played, and they must play the lowest card they hold in the suit they choose. The player with the next higher card of the suit led plays it, and so on until another stop is reached.

Once someone runs out of cards, play ends immediately. The player who played all their cards wins all the chips in the “kitty” space on the layout, and also wins from each other player a number of chips equal to the number of cards they had left in their hands.

After a predetermined number of rounds are played, the person with the greatest number of chips wins.

I still remember being taught all three of these games by my parents when I was a child, and Tripoley is a very interesting way of combining them into one (gambling) game. It’s popularity cannot be denied, and is still available brand new on Amazon for around $12 shipped! Or…keep an eye out at your local thrift store for a copy – I’m positive one will pop up before you know it.