Ugh. Have you noticed what Facebook did? They rolled out another modification to their app. I have mixed feelings whenever this happens. While I appreciate when they hear our pleas to add an icon other than a thumbs up, I despise many of their other “upgrades”. Their latest one adds bubbles to comments. It looks like a chat conversation instead of a comment thread.

At least they hit some features on the head – like the “On this day” which I look forward to… every day. It’s a reminder of what I felt shareworthy at a given point in my life. Things we’ve done, places we’ve gone, world events and of course, pictures of when the kids were little. It’s a trip down memory lane every day.

A couple weeks ago there was a picture of the girls in front of an elephant painting during a visit to the Barnum and Bailey Circus. It was bittersweet as I know the circus recently put on their final show – ever. I’m glad we were able to give the girls that experience that generations behind them will never have. Alas, not all is lost. There are still plenty of elephants to be found, albeit not painting. You can see them at the zoo, on a safari at Disney’s Animal Kingdom or even ride them during a trip to a foreign country. Here at home, naturally we get our pachyderm fix by playing elephant games like Kerala from Kosmos. 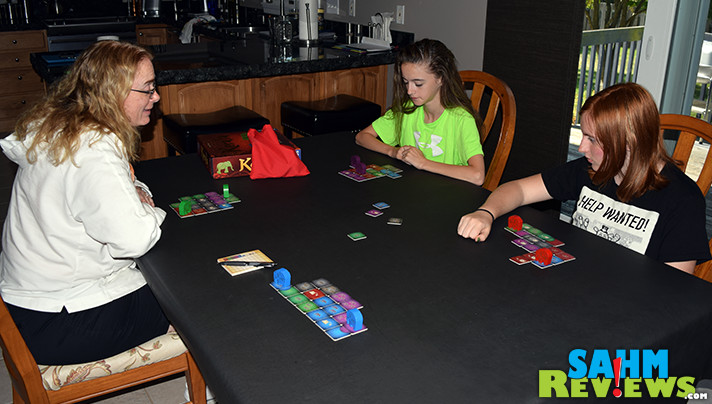 Designed to celebrate the elephant festival in the Indian province of Kerala, the game pieces include colorfully decorated elephant meeples for each player. Accommodating up to 5 people, it’s a quick game that won’t likely last more than 30 minutes. I’ll show you how it involves strategy while still being family-friendly for kids as young as 8 or so. 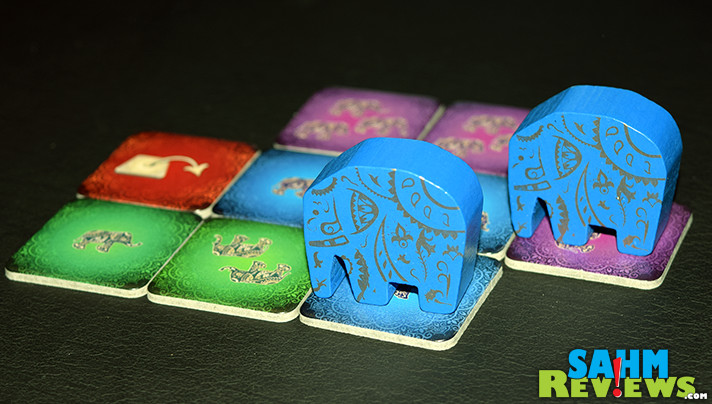 Each player selects a color and begins with the starting tile as well as two elephant markers. All remaining tiles are hidden in a lovely bag that comes with the game. On your turn, you’ll draw as many tiles as there are players and add them to the center of the table for all to see. What happens next is where things get interesting. 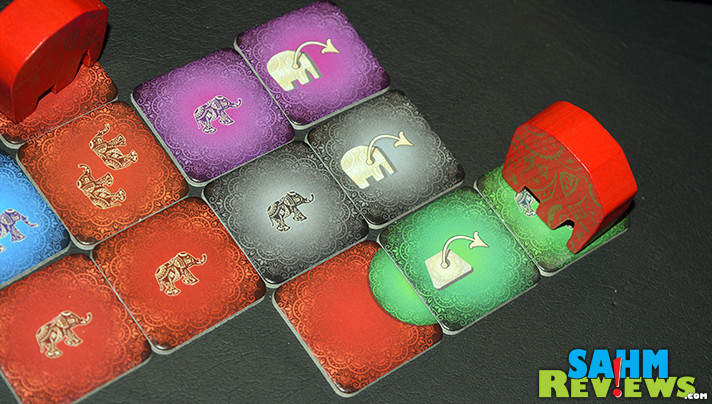 Much like Kingdomino and Castles of Caladale, each person will be drafting tiles to add to their own work area. In this case, you’ll be designing the most beautiful festival to display as many elephants as possible. You’ll want as many elephants as possible, but you also need to make sure you have some of each color. One last thing… your elephants are parading along as you add to your display so you’re only able to place them in particular spots. The first time I played, I was like “Oh, this will be easy. Mine will be beautiful.” Yeah. Good luck with that. 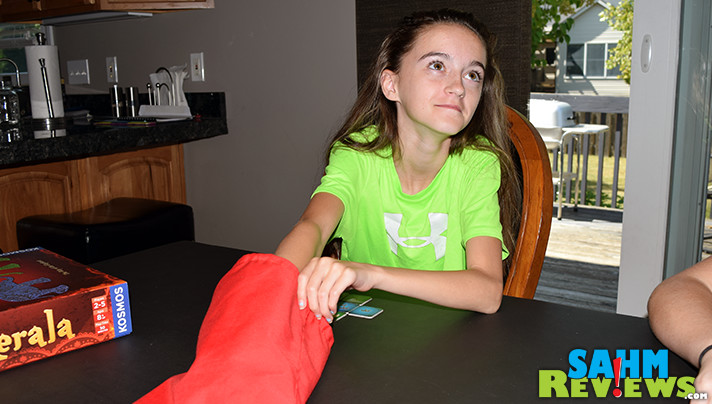 Remember those tiles you placed in the center of the table? Well now is the time to start drafting them. This is the meat of the game. The active player who drew the tiles from the bag gets first choice of ONE tile to add to their display. The player to their left is next. Choices are limited and the last person in the round literally has no option but to take what is left unless they choose to pass. Each player can pass twice in the game at the cost of an end-game point.

Tiles are placed in a horizontal or vertical space adjoining the tile where one of your elephants stands. Whenever you place a tile, your elephant moves onto that newly placed tile. After everyone has selected and placed their tile, the bag moves to the next player to start the next round.

The goal of Kerala is to score the most points at the end, but it isn’t just a matter or counting how many elephants are on your display. You only get to score the elephants in one section of each color along with two of your home color. If you have an opponent’s color in more than one continuous area on your display, you’ll need to select ONE of those to score then proceed to flip over all the tiles of that color in the second, unselected section. You’ll score negative points for any flipped tile. You’ll repeat this process for every other color, flipping additional duplicate sections. 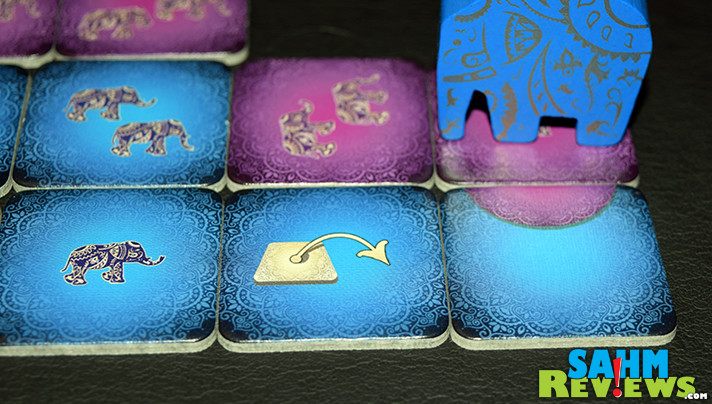 Since the randomness of the hidden draw combined with the rotating tile drafting (also combined with opponents who strategically leave you with what you don’t have space for), it is inevitable that you’ll have duplicate invalid sections. As such, there are a couple special tiles that allow you to move a tile’s location or the placement of an elephant. While these don’t score, at least they can aid you in fixing problems with your display.

Like I said, it’s harder than you think. And if you are playing with someone who makes decisions based on helping or hurting an opponent, then it’s even more difficult. If you want to grab a copy in advance of Elephant Appreciation Day on September 22nd, check your local game retailer or pick up a copy of Kerala game on Amazon. You can also enter to win a copy right here! You can also find more about the diverse toy and game line at Thames and Kosmos’ website. Stomp over to their Twitter and Facebook pages for the latest updates on products and promotions. It’s an excellent game not only for the strategic thinking and abstract concept, but also for teaching younger players how to make the best out of it when you don’t get what you want.

And it’s elephants, so there’s that.