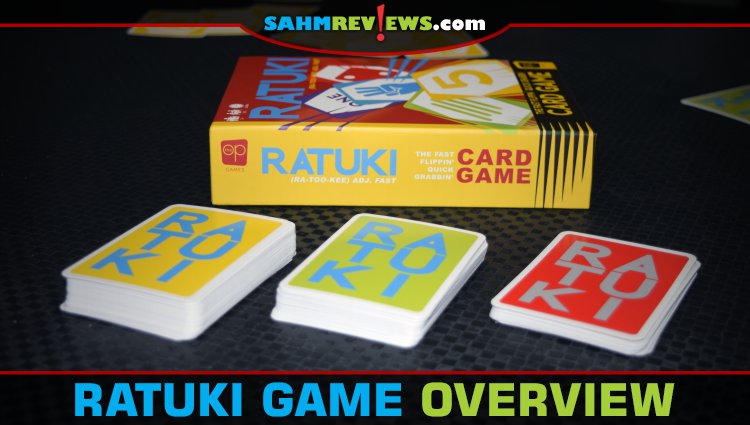 Just the other day we were sortof complaining about games of speed when we were discussing Pendulum. As we get older it becomes more difficult to remain competitive in any game that requires lightning-fast reactions. But our daughters still love them, so we play.

In the past we’ve enjoyed a number of card-based speed games like Ligretto and Dutch Blitz. Lately we’ve been enjoying an updated version offered by The Op called Ratuki. If you’ve ever played either of the aforementioned games, you’ll definitely see the similarities and influence. But it might just be different enough to warrant having both in your collection. 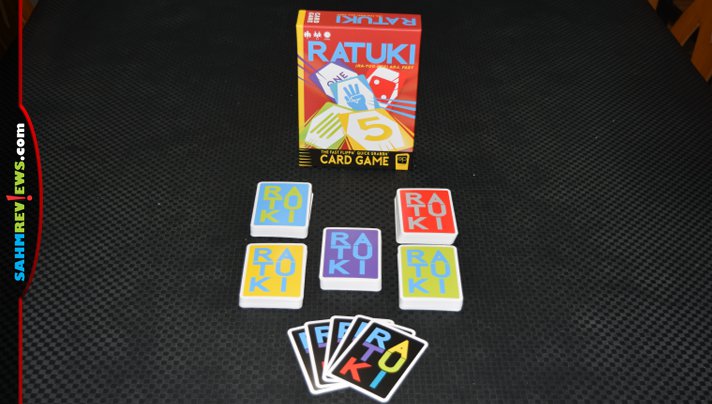 The object of Ratuki is to be the first person to 100 points by collecting cards. The cards are separated into five single color decks of 35 cards, with one being given to each player (put any leftovers back into the box). These decks are shuffled and kept in front of each player, who then draws a hand of three cards from the top. In the center of the play area will be stacks of cards created by the players and equal to the number of participants. 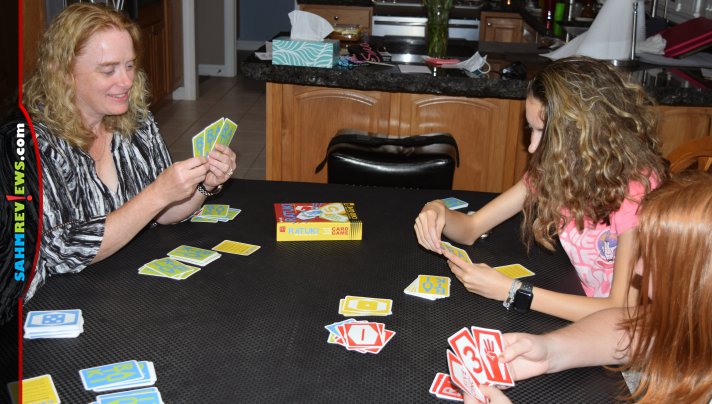 Each deck contains cards numbered 1 through 5, but depicted in various ways. They might show the actual number, a hand holding up a number of fingers, sticks, words (in English and Spanish) or a result of a six-sided die. They all mean the same thing, the value of 1 through 5. The different depictions are meant to trip you up since this is a speed game.

One player shouts, “Ratuki” and the round begins. Using only their 3-card hand, players will add to the piles in the center of the play area. If you have a “1” card of any type, start a new pile. From then on, all subsequent cards laid on that pile must be one higher or one lower than the last card laid. Whenever you play a card, you may draw a new one immediately. If you have nothing to play, you always have the option of discarding a card face-down to your junk pile and grabbing a new one from the deck. If you deplete your draw deck, you may optionally use your junk pile as a new draw deck to continue the game! If you are able to place a “5” on top of a pile, or one of the wild Ratuki cards, you can claim the pile by shouting “Ratuki” and placing all cards in the stack face-up into your personal score pile. 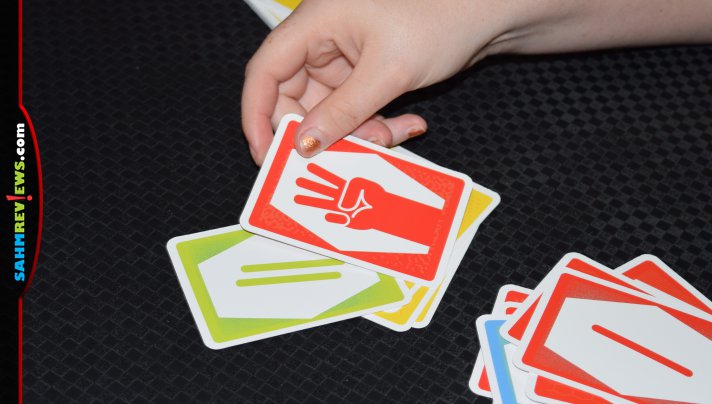 There was one glaring omission in the printed rules. Nowhere is it mentioned of how a round ends! So, we consulted the public listing at BoardGameGeek. It states, “As soon as a player runs out of cards, she can end the round.” We assume this means their draw deck and hand are empty, with nothing in their junk pile. We also ran into the situation where no one could play any cards because the only valid play was for a number which had been used up. A better description of how and when a round exactly ends would be nice.

But once a round of Ratuki does end, all players count the number of cards in their score pile and subtract any left in their hand, draw pile and junk pile. This is your score for the round (one point each) and you should keep a running total on a separate piece of paper. If you happened to score less than zero during the round, simply record nothing – you cannot lose points. The first player to exceed 100 points over multiple rounds wins Ratuki!

Everyone should have a good speed game in their collection of card games, and if you don’t already own one, this is an inexpensive addition. Pick up a copy on Amazon, direct from the publisher on their website or ask for it at your favorite local game store. While you’re browsing, ask about another hit party game they’ve released this year – Hues and Cues!

Can you recommend another speed-based card game you enjoy?