This week’s Thrift Treasure has a feature that we’ve only seen in a couple games. That is the ability to purchase additional copies and play the game with more people. Roll for It by Calliope Games comes to mind. So does Castellan by Steve Jackson Games. In both of these the addition of a custom-marked version doubles the number of players.

A couple days ago we picked up a copy of Ligretto by Playroom Entertainment at our local Goodwill. We had seen this game before, but every time we checked the contents there was always at least one card badly damaged or missing. This time luck was in our corner and this copy of Ligretto looks to be barely played. 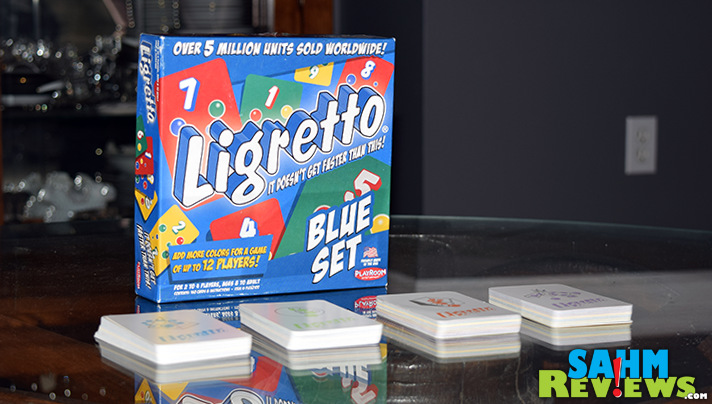 The current ruleset of Ligretto is generally considered to have been created in 1988, with the original game being published sometime in the 1960’s. Dutch Blitz came out somewhere in between those dates and is widely accepted to be a derivative version of Ligretto.

Ligretto is one of those games where everyone plays simultaneously using their own deck of cards. Each player is given a custom deck of 40 cards numbered from one through ten in four colors. All decks have their own custom backs, but the actual contents are identical. 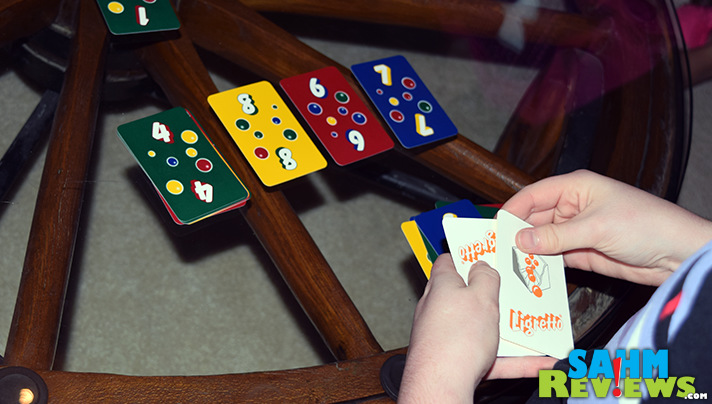 To set up a round, players deal ten cards face down into a stack in front of them and then turn it over to reveal the top card. Three additional cards are dealt to the right of this stack, creating a row. The balance of the cards are left face down as a draw pile. 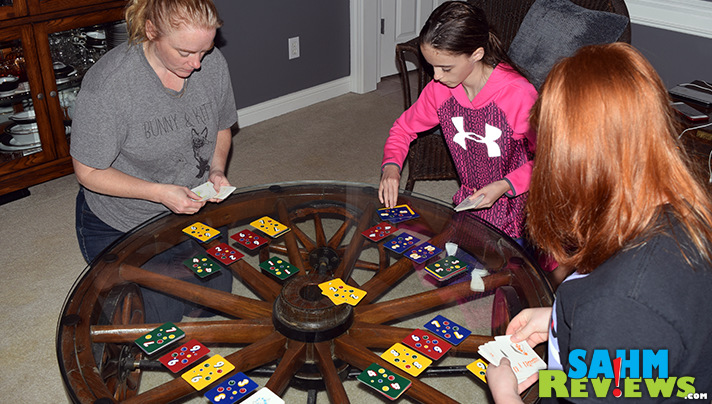 The object of Ligretto is to be the first player to get all of the cards out of the 10-card Ligretto stack. When the round begins, all players play to the middle of the table trying to build stacks in numerical order of the same color. Anyone can begin a stack by playing a “one” card, and then any player can play the next card (in this case a “two”). Once a stack reaches ten, no additional cards may be played on that pile.

To play a card you simply have to have the correct card sitting in your 3-card row. Whenever you play a card from your row, you remove the top card from your Ligretto stack and put it into the row. If you do not have a valid card to play, you draw three cards from the draw pile, flip them over and only pay attention to the top (third) card. Similar to a standard game of solitaire where you draw three each time, only in Ligretto on the third card can be played. If you can play it, do so. If not, continue drawing until you have a valid play (remember, speed is important!). 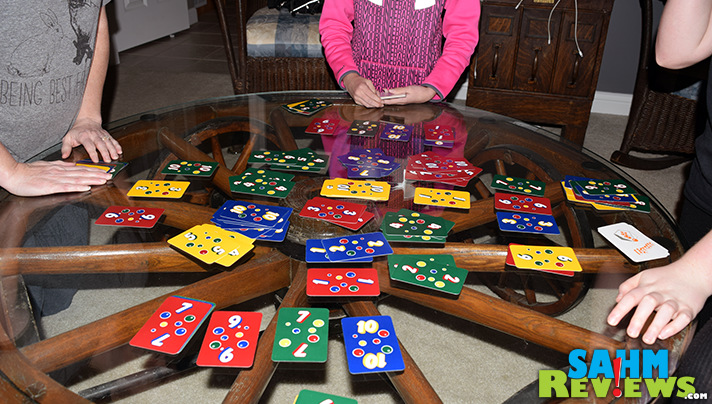 The first player to put their last card from their Ligretto stack into their row calls out “Ligretto stop” and the round ends. Players receive one point for each of their cards played to the middle of the table (this is where the different decks come into play). You also lose two points for any cards left in your Ligretto stack. First player to accumulate 99 points over multiple rounds wins the game!

Ligretto supports four players out of the box, but as I mentioned previously, there are additional colored boxes that may be purchased to expand the table to up to twelve people! I suppose the same game could be played if you had multiple decks of standard playing cards around with different designs on the back, but since Ligretto retails for well under $15 and ends up at thrift quite often (over 5 million copies sold worldwide!), this official version seems to be the best value.