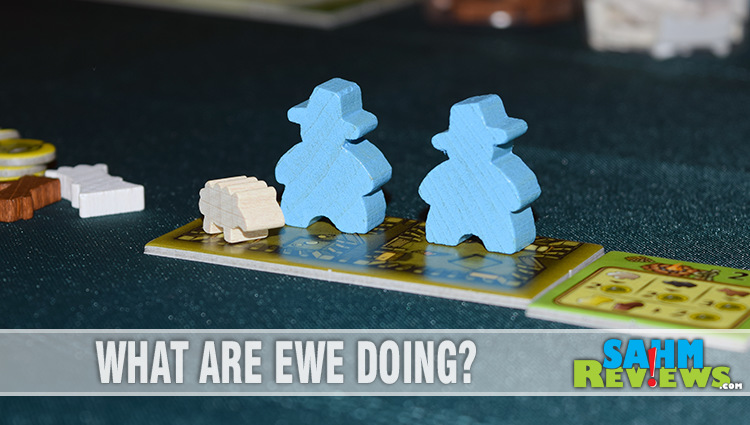 Hopefully by now you’ve figured out that we not only love board games but think they provide wonderful windows of opportunity for family bonding. Many of the games we feature may sound overwhelming, but the reality is, games aren’t that difficult as long as you read the directions. How does this sound? There’s a game where you can opt to purchase properties that you can later spend money to upgrade by placing tokens on the related space. Sometimes you’ll get cards that instruct you to take specific actions and sometimes they just cause you to gain/lose money. Bonuses that players get and improvements they make can seriously impact one another. Does it sound overwhelming? It shouldn’t. It’s the basis of Monopoly.

Madison and Kennedy are now 14 and 12 so they’re at an age where strangers aren’t as likely to question their interest in a “heavy” game. But when they were younger, they got dirty looks all the time during game night (at least until people realized they knew what they were doing.) That’s because we seldom have told them they cannot play with us. Only on a couple occasions when we knew the components weren’t age-appropriate (language, depiction) did we encourage them to try something else. When it came down to it, they simply had to listen to game directions by the person teaching it or sit down and read the instructions or watch a video. 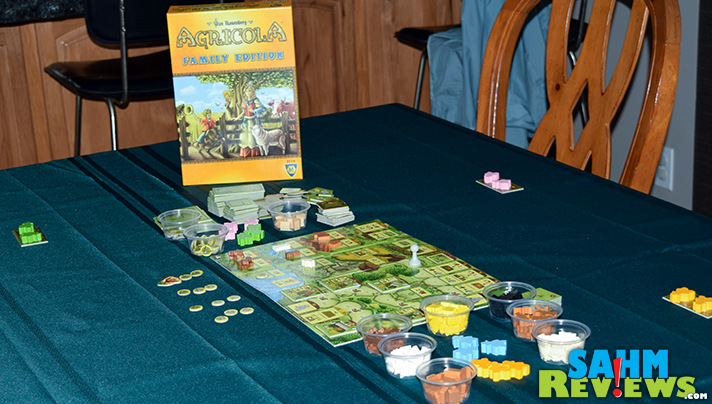 Earlier this month I shared details on Agricola by Mayfair Games. It’s a fantastic game, rich with details and depth of strategy. Kids can play it, but it isn’t uncommon for someone (like me) to get a “deer in the headlights” feeling with so many choices. Agricola Family Edition mitigates those issues, bringing a lighter version of the class to the table for a less intense game, perfect for families and new gamers. 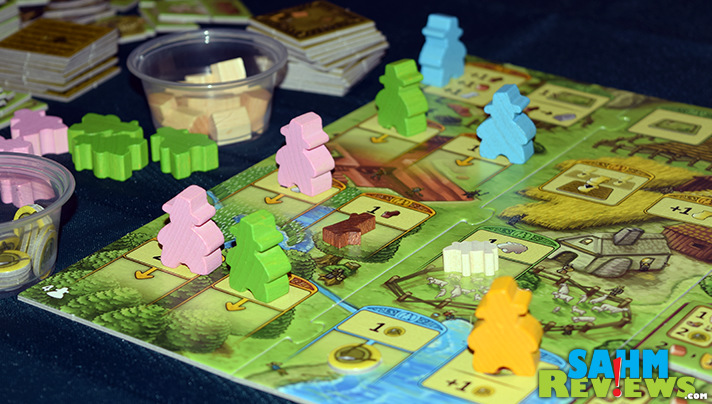 It gives the feel of the original without having too many choices that might make the game drag on or cause someone to be overwhelmed. It’s like playing a “junior” version of a classic – same game concept just simplified for a less-experienced audience.

You’re probably asking how Agricola Family Edition is different from the original and whether it’s as good. First, I want to encourage you to read the overview of Agricola because I prefer to focus on the similarities and differences between the two rather than rehash how the game itself is played. So let’s start there. 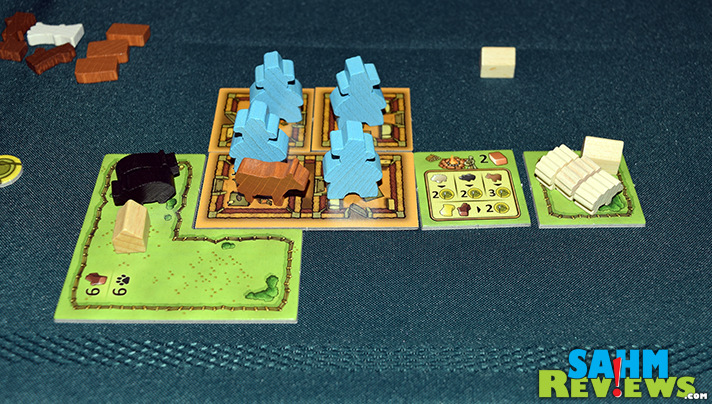 The overall goal is the same – to have the best farm at the end of 14 rounds consisting of three phases each (preparation, work, return home) and some harvests. The types of components are mostly the same as well including sheep, board, cattle, wood, clay and reed. This allows players to collect and breed livestock, plant and harvest goods and make improvements to their homes. 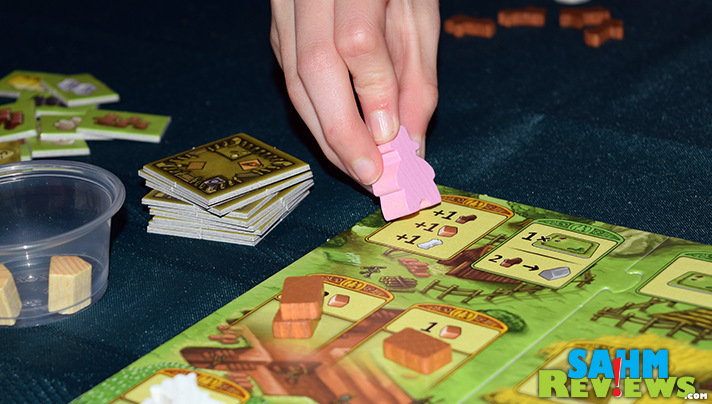 The board is restocked with goods in the preparation phase in the same manner as Agricola and worker placement/removal, harvest and feeding the people all follow the same patterns as the original. 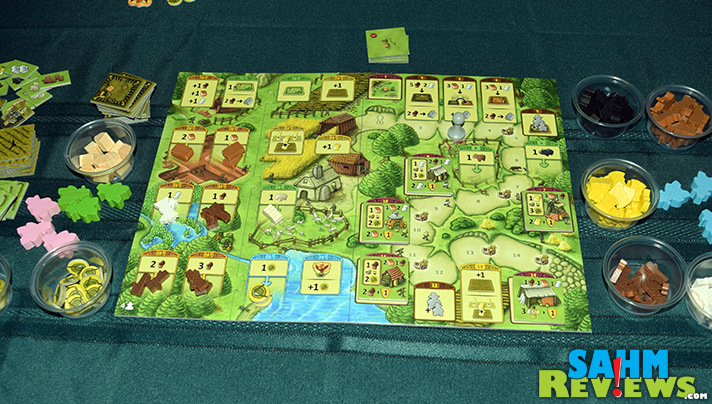 There are a few differences that help simplify the game while maintaining the integrity of its namesake. The original game had action cards that offered a variable game experience each time the game was set up. Agricola Family Edition has a static game board where the actions remain the same with each experience. The board is put together jigsaw-style depending on the number of players making the entire setup process easier and less time consuming. 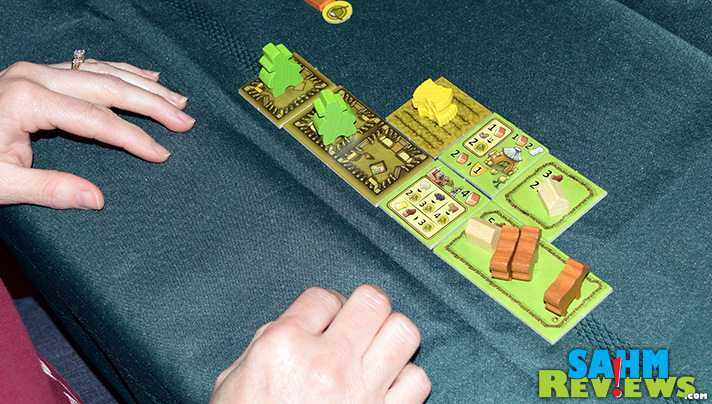 Some of the actions are the same, just simplified. As an example, in Agricola, players build fences around pastures or build stables to pen their livestock. Fences are handled differently in Agricola Family Edition. The action allows players to build pastures based on the number of components listed on the tile which allows the farmer to keep the designated number of livestock. A stable placed on that pasture doubles the quantity of a single type of animal that tile can accommodate. Breeding animals doesn’t require they be in the same pen and animals can be redistributed across the farm at any time.

The cost of home improvements are similar in both games – as denoted on each individual tile but there are far less options. You can add a fireplace or hearth to be able to bake bread and a couple bonus tiles allow the farmer to do some random conversions for feeding or gain end-game victory points. These minor changes make the game easier to navigate. 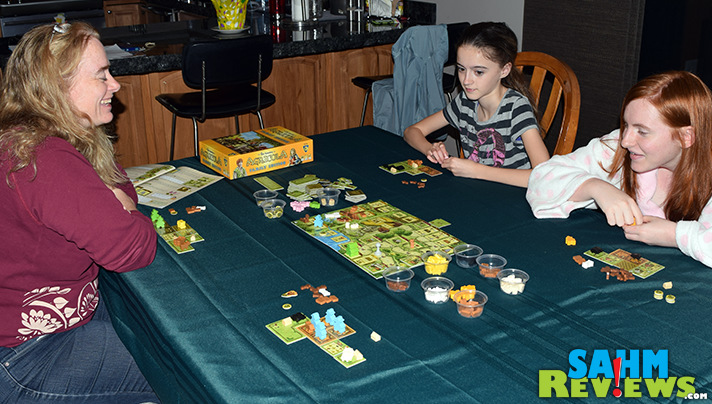 Now back to that question about whether it’s any good. I’m biased in that I think almost every game has merit in some ways. If you’re used to playing a game that has a million choices and never put yourself in a position to play with anyone who slows the game down, then maybe this isn’t for you. If you want Agricola without the big time lock, this might be. I think Agricola Family Edition is a good stepping stone for families as well as an opportunity to include new players in more intense gaming concepts.

You can pick up a copy of Agricola Family Edition for around $34 on Amazon. If farming doesn’t sound like your kind of game, Mayfair Games offers a variety of other titles the involve chocolate, cats, quilting, hotel management and even treks through Costa Rica just to name a few. Learn about others on the Mayfair Games website or visit them on Facebook and Twitter to see what else they have going on.

How often do you play games as a family?