By now I’m sure you read about our horrible hotel experience while attending Geekway to the West last week. It amazes us when national chains allow their franchisees to operate in this manner, without any apparent oversight. This one experience will sour us on their brand for a very long time, maybe forever. 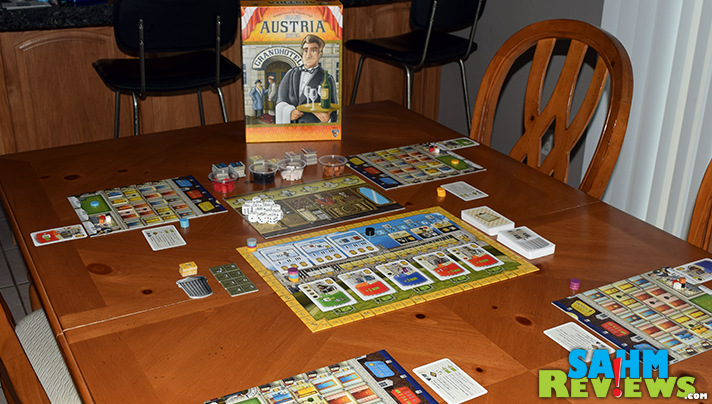 By total coincidence one of the games we’ve been playing for the past month or so is Grand Austria Hotel by Mayfair Games. As you might guess from the title, you are tasked with running a small hotel in the heart of Vienna during the Viennese Modern Age (early 1900’s). At the same time you cannot forget the country is ruled by royalty, and honoring the Emperor will help keep your upstart facility alive.

Grand Austria Hotel is played over only seven rounds, but expect a typical game to last around 90 minutes. Each player is your competition with an identical hotel (unless you’re using the advance side of the board where every hotel is laid out differently). 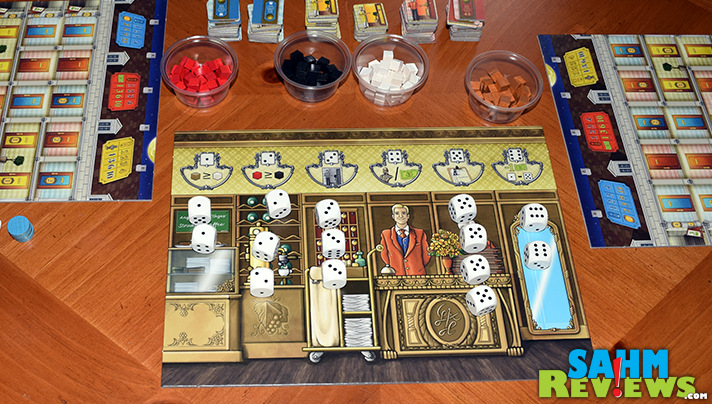 At the beginning of every round the start player rolls all of the dice (quantity varies by number of players) and places them on the board in their corresponding location on the action board. These represent the types of actions that may be taken by each player on their turn. 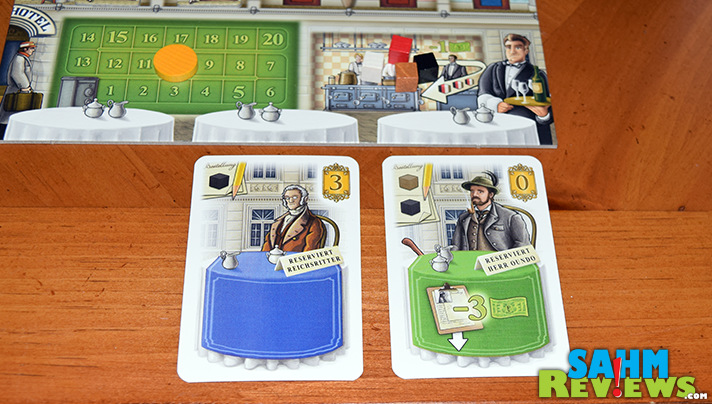 As your first action, you may spend money to attract a guest to visit your cafe. Pick up a card from the five available guests and pay the fee (think of it as a marketing/advertising fee) and place them in your cafe on the first floor of your hotel. It is from the cafe that guests decide to spend the night in your hotel, so this is the first step in winning them over as a customer.

From there, you choose one of the rolled dice and carry out the corresponding action. These vary from round-to-round depending on what is rolled and allow you to collect wine, coffee, strudel or cake to prepare in your kitchen. The more dice on the action spot, the more times you are allowed to take the action! These actions are also what allow you to prepare rooms, gain favor from the Emperor or hire additional staff. 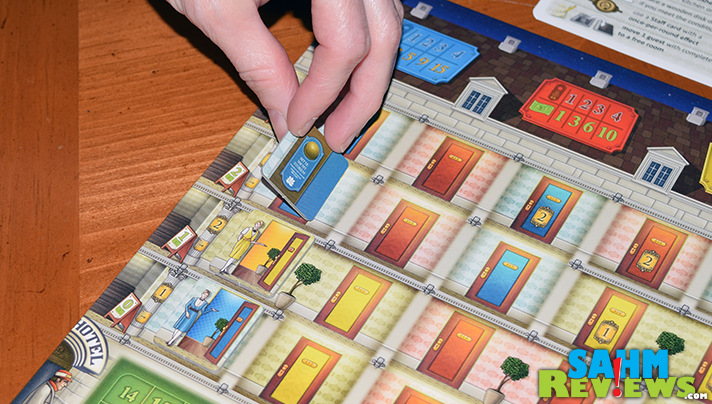 Rooms can only be prepared in order from the first floor. Each new room that is cleans and made ready for guests must be adjacent to a previously-prepared one. Planning your cleaning routine (up or across) to maximize your bonuses (more on that later) is key to an efficient hotel operation.

Sometimes the action you want to take isn’t available thanks to either an unlucky dice roll or someone else beats you to it. At this stage you might elect to pass your turn, and once everyone else either passes or takes their two actions, you remove one die and then reroll the rest to hopefully earn the action you desired.

Lastly, there are a number of free actions you can take. Once per turn you can pay 1 krone (money) to add one to the number of dice on your chosen action space, allowing you to take an additional instance of that action. You can also pay 1 krone to move up to three dishes and drinks from your kitchen and serve them to guests. This is also when you can play the abilities on your staff cards, engage in politics or send a cafe guest up to a room for the night. 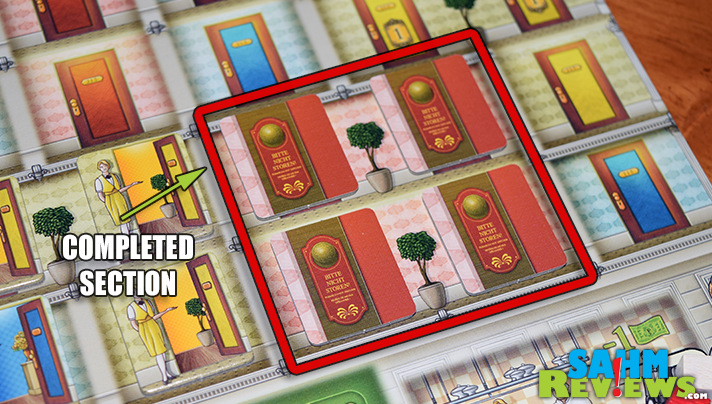 Finding room in your hotel for your guests is the primary way you’ll earn victory points. The act of putting them in a free room earns you points equal to what is shown on the guest card along with any other rewards printed. Guests can only be put in rooms of the same color, as they only like certain room types. There is also a bonus given for completing a block of rooms in a group, with higher rewards for larger conjoined areas. 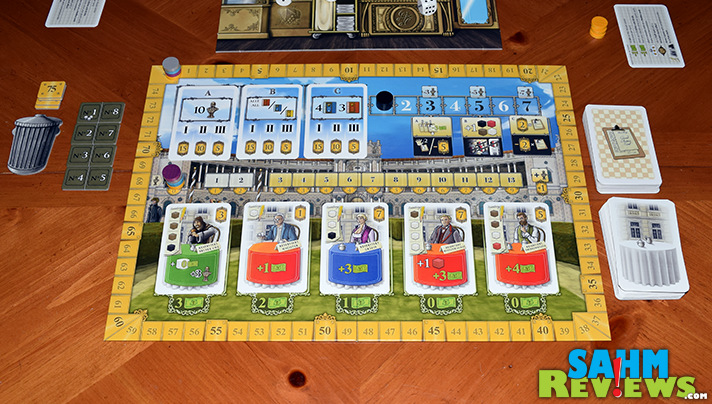 At the end of the 3rd, 5th and 7th rounds there is an Emperor scoring. Simply receive victory points for your position on the Emperor’s track according to the value printed below your wooden disk. Then everyone moves their disk back 3, 5 or 7 spaces (depending on the round) because you must continue to earn favor. If your disk remains in the yellow area, you’ll receive the bonus listed on the Emperor tile. Fall to zero and earn the penalty! These tiles vary from game-to-game, and are different for each scoring round, but provide valuable bonuses that may tilt the favor into your hand. 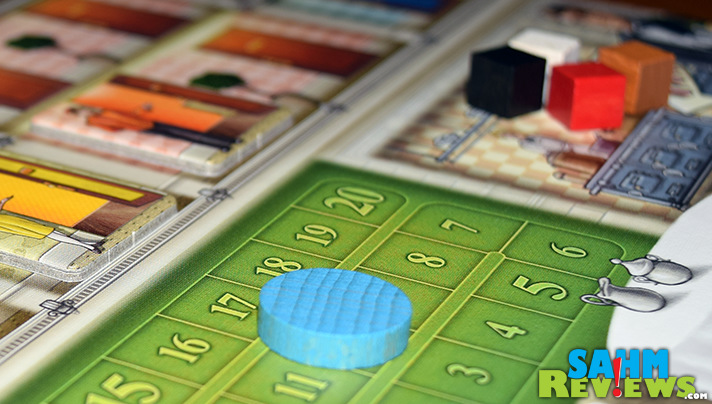 After the 7th round is complete, final scoring is tallied. Certain staff cards will award additional points, occupied rooms award points for the floor they are on with higher floors awarding more. You’ll also get points for leftover krone and food/drink in your kitchen, but will lose 5 points for every guest left stranded in the cafe with nowhere to sleep.

Grand Austria Hotel runs a little higher in price than most games we preview on SahmReviews at a $60 MSRP. However, because of the solid game play, depth of strategy and replayability, Mayfair Games has already completely sold out of the first printing! There are a handful of copies available on Amazon for just under MSRP, but I would not hesitate very long or you’ll be awaiting the 2nd printing. We’ll be snagging another copy for the folks at the Red Roof Inn in Maryland Heights, MO. They could use a few lessons on how to run a hotel.

Check out Mayfair’s Facebook and Twitter timelines as they’re always talking about upcoming tournaments, conventions and Learn to Play events. Let them know you want to see more of their line here on SahmReviews!