Now that my daughters are solidly in the pre-teen/teen years, dress-up has been replaced by fashion websites, brand name shoes and (gasp!) makeup. All of their Disney princess outfits went to Goodwill some time ago. My youngest has shown some interest in cosplay after attending C2E2 in Chicago. Madison, my oldest, was also fascinated to see a life-sized Bastion from Overwatch at Gen Con this year. 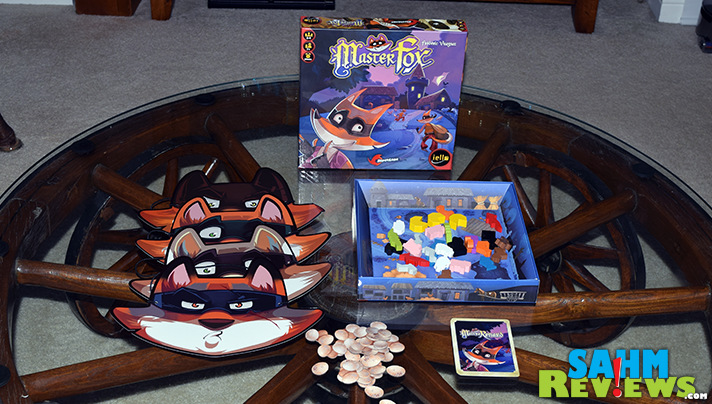 I discovered a recent game by iello Games at Origins Game Fair called Master Fox that made me wonder if they would play something that required putting on a mask as part of the game requirements. Maybe it was just me wanting them not to grow up, but I picked up a copy anyhow and could not have been more surprised at the result. They’re still my ‘little girls’!

As a family we play a LOT of games. From classics we find at the thrift store to heavier “Euro-games” that last for hours and make your head hurt with all the math. But sometimes what is needed is a brainless, silly game that will have everyone laughing and giggling. That’s exactly what we found in Master Fox.

The first thing you’ll notice is the masks. Dress-up time again! Each player chooses one of the four unique fox masks and places it on their head. These are not your typical masks with eye-hole cutouts – they are full blindfolds disguised as masks!

Of the eight mission cards, three are drawn each round that dictate which animal type the foxes are after. The wooden loot pawns are placed into the game box, shaken and set on the table within reach of everyone. At the count of three (with masks on), everyone uses one hand to feel and grab the correct animals that match the drawn cards. 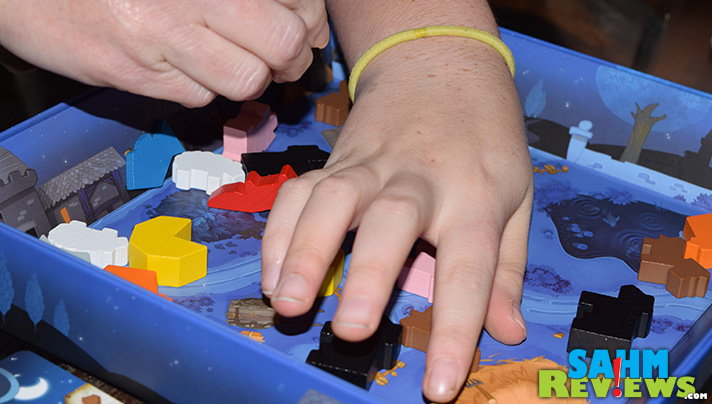 You may only grab one at a time, placing your choice in your other hand. There are penalties for mismatched selections, so only select ones you are completely sure about. Once any player has three in their opposite hand, they can say “STOP” and the round immediately ends. Any pawns still in your picking hand are returned to the box. 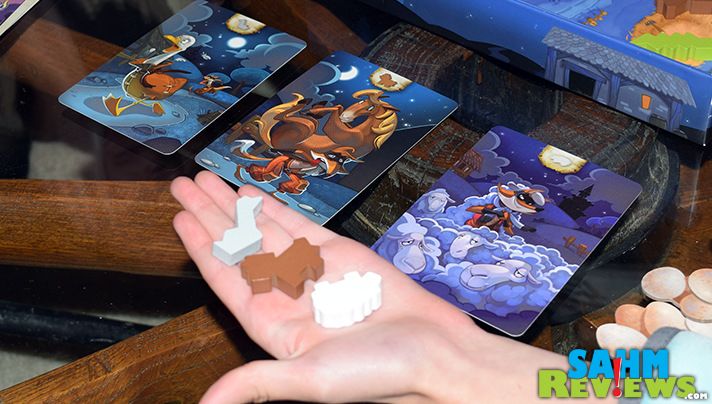 Raise your masks and verify everyone’s selections. Each person gets a point (in the form of an egg token) for each pawn that correctly matches the mission card. They also lose a point for an incorrect selection! Draw too many and you’ll also lose a point! 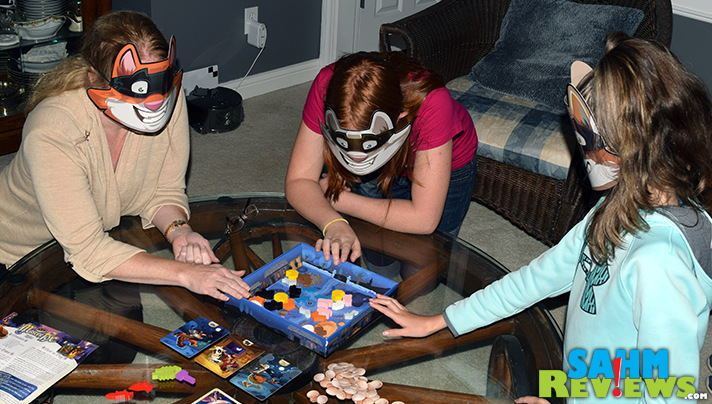 In subsequent rounds additional Ruse Pawns are added to the mix. There are two fox pawns that award you with a point if you are the one to find it. Snake pawns allow you to steal an animal from another player, while the hammer pawn protects you from the snakes. A word of warning – you can only have one Ruse Pawn in your hand! Pull two or more from the box and not only do you not get the bonus, you’ll lose a point for each additional one you have!

The first person to collect ten egg tokens is declared the winner. Remember, this is all done while you’re blindfolded, so while it may seem simple, it is anything but. Master Fox not only requires you to remember which three animals you’re seeking, you have to have a general idea of the shape and be able to feel for it. All while others also have their hand in the box! It’s almost a hand-version of Twister!

At around $20 on Amazon, we see no reason you couldn’t take multiple copies of Master Fox and combine them to support more than the 2-4 players it is designed for. You might need a slightly larger box, or maybe just opponents with smaller hands!

You probably recognize iello Games from their mega-hit game, King of Tokyo. Expect the same quality and fun from Master Fox and ignore the recommended age limit of 7+. This is perfect for kids as young as 3 or 4 as well for adults! Check them out on Facebook and Twitter as they’ve recently announced a couple new titles there. Maybe one is perfect for your family!

Do your kids still play dress-up? Have you ever done cosplay yourself?