I’m often asked how we got involved in the gaming industry. We typically outline details about how we started by playing games like Castle Panic at a local board game meetup then jumped right in to a myriad of more difficult titles. We hit the ground running and haven’t looked back. It’s been life-changing in so many ways. Encouraging family bonding, social skills, new friendships, strategic thinking and more, we cannot say enough good things about this hobby. That usually leads into a follow-up question about how they can get their families interested. The best place to start is to introduce kids to board games when they are young then make time for family bonding no matter what their age.

We’ve shared some ideas for starter games including an overview of My Little Scythe, details about Ticket to Ride: First Journey as well as Agricola Family Edition. Our latest addition to this list is My First Castle Panic by Fireside Games. It’s a cooperative game that’s easy enough for preschoolers to enjoy without a parent needing to micromanage the experience. 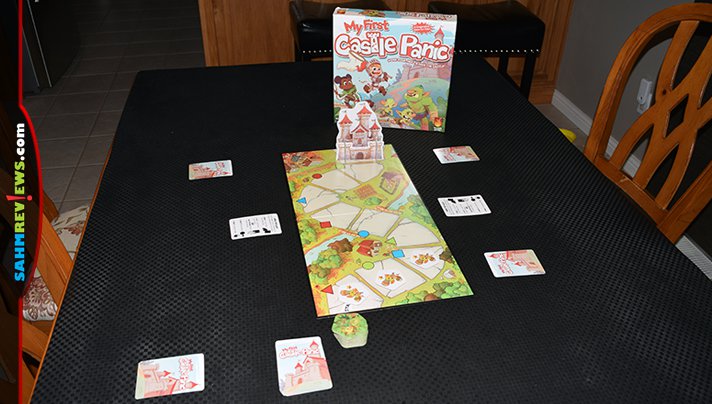 While kids will probably need a walk-thru when they first learn it, they should be fine after that. Setting it up is pretty simple, too. Lay out the board and randomly draw three monsters to fill the first three spots on the board. The castle and wall will stand in their appropriate places at the opposite end of the road from the start space. Next, shuffle the deck of cards and give each player one then place the rest near the board as a draw deck. Place the bottom of the box along side the board. You will use it as the dungeon when you capture monsters. 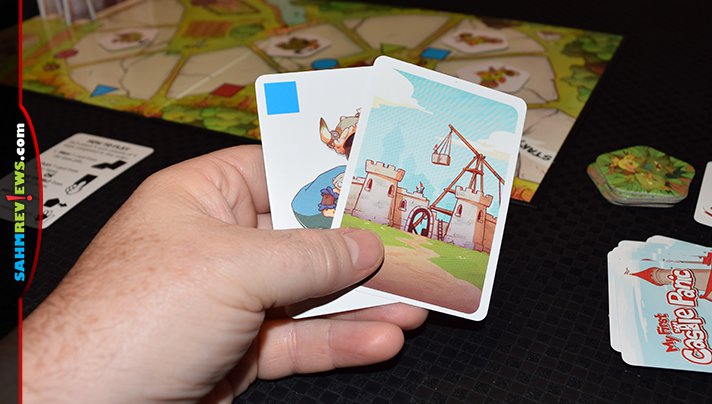 At the beginning of each turn, you’ll draw a card. Most cards will have a colored shape, a group of shapes of one color, a group of colors of one shape. One special card allows you to rebuild the wall while another lets you temporarily remove a monster from the board. 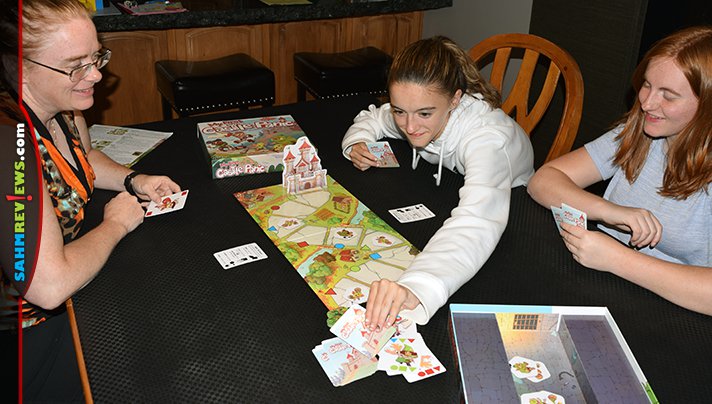 After you draw a card, you may either play a card or ask another player to play one. This game is cooperative so it’s encouraged for kids to leave their cards visible for teammates to see. There’s a great life lesson for kids: Sharing of information is key to success! 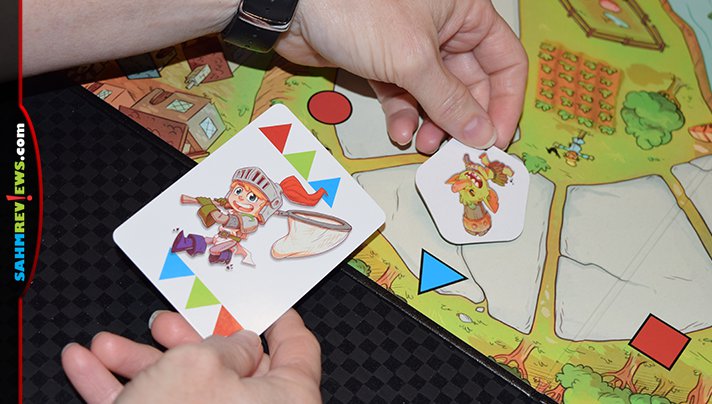 When you play a card, you may remove a monster from the space that matches the card. The whole point of the game is to protect the castle, so sometimes it is beneficial for another player to use a card to capture a monster that’s getting close to possibly destroying it. 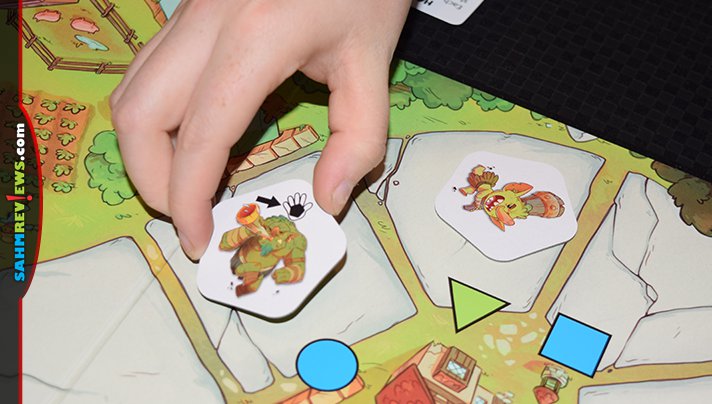 Once you’ve played your card (or had your teammate play one), all monsters move one space closer to the castle. Note that there aren’t THAT many spaces so it’s important not to let any of the monsters get too far ahead. The reason this is important isn’t just because of the castle, it’s because some of the monsters have special abilities when they enter the board. The Runner rushes to the front taking the space right in front of the lead monster. The Shover pushes all the monsters an extra space forward. A third, the Marcher, is even worse. He pushes the monsters another space forward AND another monster enters the board. 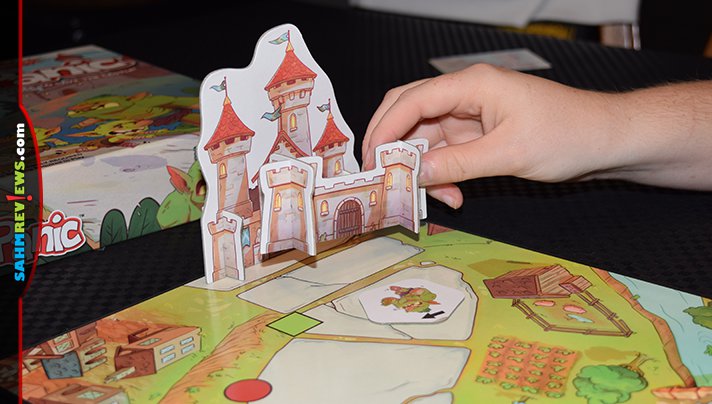 When a monster reaches the final space, it’s only one more space until the castle! Thank goodness there’s a wall in front to protect it. The first time a monster hits the wall, both get knocked down. The wall is removed from the board and the monster is sent to the dungeon. Don’t forget that there’s a card to let you rebuild the wall! 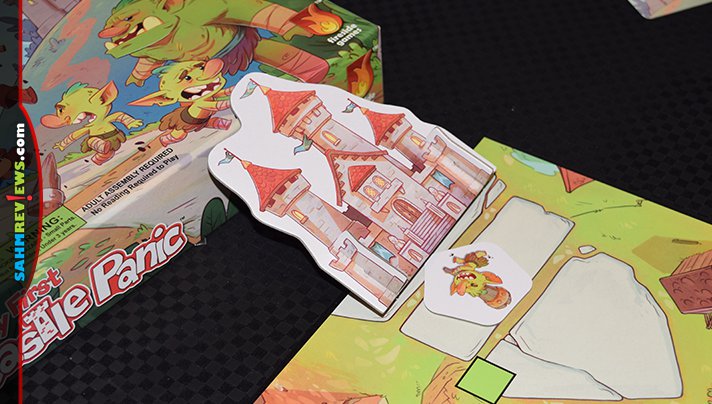 Once there is no longer a wall to secure the castle, it only takes one monster to be able to knock it down. Once you lose the castle, the game is over and everyone needs to try again. If you’ve successfully sent all the monsters to the dungeon then everyone wins!

The first time we played My First Castle Panic, we lost. Yes, four of us who are no strangers to modern board games who have played the original Castle Panic and Star Trek Panic plenty of times… lost. One of the girls said, “But it’s a game for four year olds! How could we lose?” Scott offered the best response which I think sums up one of the biggest benefits of playing games. Just because a game is easy to learn and easy to play doesn’t mean it should be easy to win. These types of lessons aren’t easily learned in the classroom, nor through sports where kids are taught that winning is everything.

If you’re on board with wanting to get this into the hands of little kids, don’t panic! If your local game store doesn’t have copies available, you can purchase My First Castle Panic on Amazon for under $20! Always full of great game ideas, visit their website, Twitter or Facebook feeds to see what the team at Fireside Games is working on.

What game would you like to see into a “My First…” version for kids?