Whether online or offline, we’re big advocates for encouraging people to play games. Games are great as  entertainment, awesome teaching tools, facilitate bonding, are social and so much more. Whenever I find an opportunity to encourage inclusion of a game in an environment, I do. Last year during a trip to New York for a conference, a friend invited me to stay overnight at her house to save the cost of a hotel. I encouraged her to take me to her local game store because I’m always interested in seeing the different local game store layouts and activities. While we were there, I pointed out several that would be a good fit for her family. We stayed up all night talking and board games, of course, were part of the discussion.

If you are a soldier to only playing classic board games, then all the new ones we have been introducing you to might feel a bit overwhelming. I assure you they aren’t as difficult as you might think. It’s simply a matter of learning the rules. What better way to learn how to play than with an app? Two years ago, we listed the Ticket to Ride app as one of the top board game apps and I’ll admit that I actually play it daily when I need some down time. 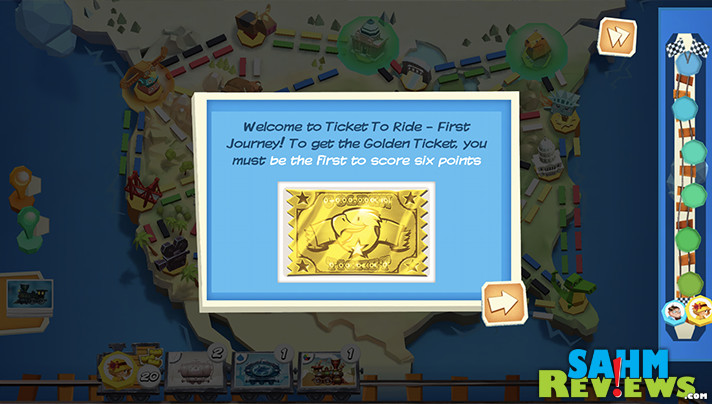 Ticket to Ride First Journey is a simplified version of the original game and so is the app.  The goal and rules are easy: Collect train cards to complete routes across the country in order to be the first to earn a Golden Ticket. You (and your opponents) will have your own designated routes that need to completed and thankfully there are multiple ways to connect the cities to achieve these goals. 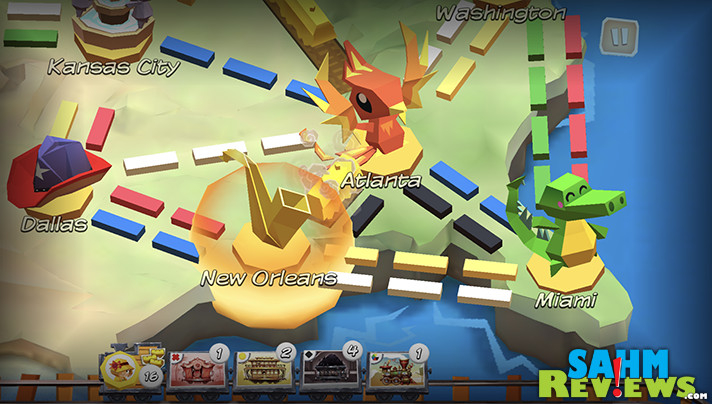 Major cities represent the start/end locations for routes and are marked by an icon that represents that particular city. As examples, you will see a Statue of Liberty in New York, an alligator is synonymous with Miami, a saxophone for New Orleans, a movie camera represents Los Angeles and a bridge in San Francisco. Not only are children being entertained by the app, but at the same time are learning a bit about what makes each particular city tick. 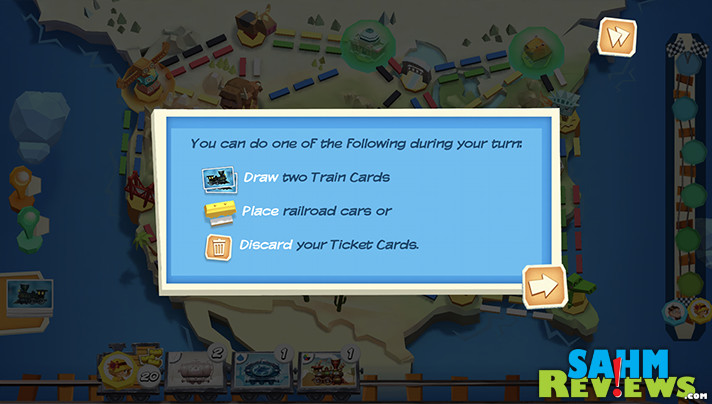 On your turn, you have three actions you can select from. Draw two train cards, place railroad cards or discard ticket cards. The first two are the same rules as in the base Ticket to Ride game. Although in that one, you can select new routes but don’t get to discard the old ones that you don’t like. Scoring is simplified in Ticket to Ride: First Journey. 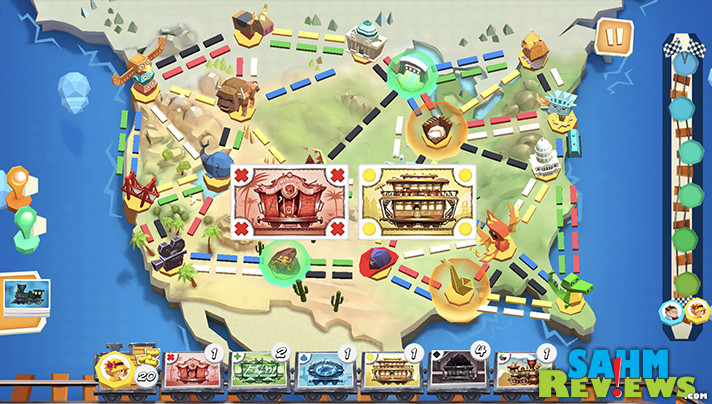 The first option for an action you can take is to take two Train Cards from the draw pile. Train Cards represent the cars needed to make the trip between cities. Since the only way to complete routes is to use the matching colored cards, you’ll find that the bulk of the game revolves around selecting cards. There are cards for each color represented on the map in addition to locomotive cards that serve as wild cards. You’ll be able to see what cards are in your hand by looking at the train track at the bottom of the screen. 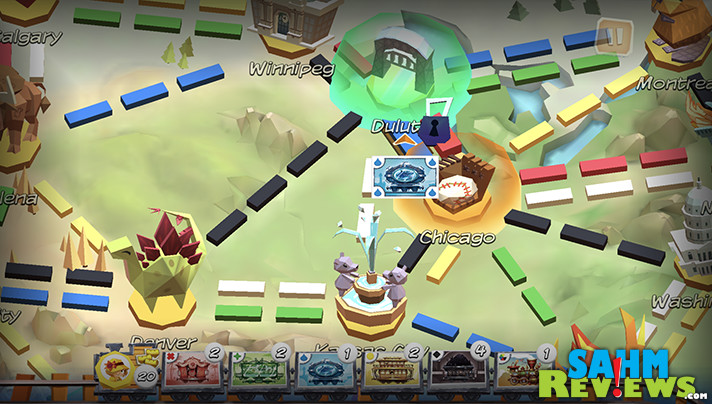 Another action is to place the railroad cars onto the map to claim the route. This is done by discarding the matching color Train Cards in your “hand”. While some cities are connected by only one track (of one color), some cities are connected by two sets of tracks of different colors. In order to complete that connection, you only need to complete one of the two. You can select either set of tracks but will need enough Cards of that color (or that color plus wild cards) in order to complete it. To place your cars on the track, it’s as simple as drag and drop. Select the designated color of cards and drag them to the route you want to claim. Watch for the arrow to show up so you know they’re being placed where you want! 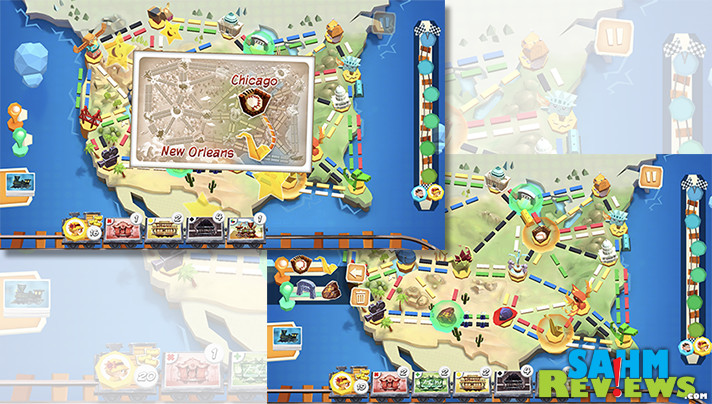 The game is about completing routes by gathering the cards, but you’re blindly drawing and receiving random colors (or wild cards) each time. At any time, you can check the routes that you have by clicking on the thumbtacks on the left side of the screen. These represent the routes you are trying to make, but sometimes you don’t get the color of cards you need. As a final option, you can discard your Route Ticket Cards and get new ones. For kids who easily get frustrated with not getting the colors they need, getting a different route is always an option.

Ticket to Ride First Journey can accommodate up to four players which can consist of humans in a pass/play process, with an AI playing as additional characters or a combination of both. The first player to reach six points earns the Golden Ticket! Not only is the Ticket to Ride: First Journey app a fun game for kids, it is an excellent way to introduce young children to this different type of strategic board game and give them an overview of some of North America’s major cities. Ticket to Ride: First Journey is available for iPad and iPhone as well on Google Play and Steam. You can learn more about Asmodee Digital game apps by visiting their website or checking out their Twitter and Facebook feeds for announcements. As strong advocates for getting kids to play games, introducing these concepts in digital form might be what it takes to get kids excited about playing board games offline as well.

Have you ever played any of the Ticket to Ride games?