Like good parents, we try to make sure we arm our kids with facts and information to guide them to making good decisions in life. We hold the same principles for all of you as we hope to provide you with information to make the holiday shopping season less stressful. Trying to gather ideas for what to get each person on your list can be exhausting so over the course of the last few weeks we have put together comprehensive 2017 holiday gift guides ranging in ideas, products, age ranges, complexity and theme. We started off with something near and dear to our hearts – suggestions for games for the family. But we didn’t stop there… If you’re looking for ideas for games for little kids or toys for preschoolers or gift ideas for school-aged kids, we offered several. We put together a list of dice games, card games that fit in stockings, games for teens and adults, games for 2 people as well as a list of games for multiple players. There are also a variety of STEM and educational ideas, several ideas for the Pop Culture enthusiast and a grouping of home and electronic gift ideas.

Just as all good things must come to an end, so will this year’s gift guides. We decided that the best way to wrap things up is to round out the list with MORE family games because, you know, entertaining, educational, bonding, social skills, blah blah blah. We continue to harp on it because we are true believers in the benefits of gaming! And you really can’t have too many games, right? Right! If you notice the

logo, that means we highlighted the game at some point. If you click on that icon, it will take you to our overview which explains more about the game and why we think it’s a good fit for a family. Don’t let games without the icon deter you from considering them. We wouldn’t have included them in the list if we didn’t think they were a good option! Between this list and the other 12, you should be set for ideas.

As with all our other gift guides, many of these games will be part of our 150+ Days of Giveaways so be sure to keep watch daily (at 3pm CT) for the latest announcement. Of course, we hope you’ll take a few moments to tell our sponsors thanks because without them, these promotions wouldn’t be possible. 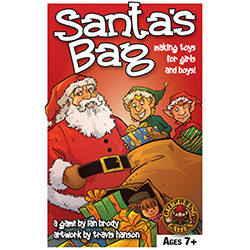 This evergreen holiday game belongs under every tree! In Santa’s Bag, you play an Elf in Santa’s workshop, making toys for girls and boys! The National Parenting Center, “The game is simple enough to learn and get started with but complex enough that kids can play for an extended time and remain engaged…; families came back to it multiple times. Making toys for others which is just what the season should be all about.” 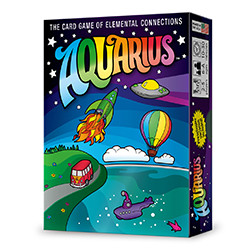 Aquarius is the Looney Labs game of elemental connections! Kids love the colorful design, fast play, and familiar matching strategy. Adults love the game’s competitive edge. It’s the perfect family card game. The player with the longest hair goes first connecting element cards to complete a secret goal. Deal the cards and plan your move, but don’t get too comfortable — you may get zapped! 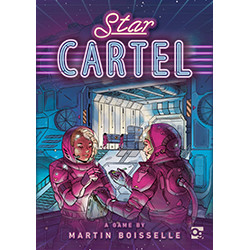 Star Cartel is a game of keeping the Empire close and your enemies closer, as you scratch out a living in the unforgiving stars. 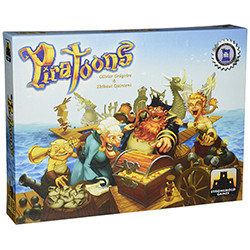 Build the biggest, baddest, best Pirate ship on the high seas! Recruit your crew to plunder booty! In Piratoons, Treasure is sealed in the treasure chest. Each Pirate sends crew to plunder the treasure. The more crew a Pirate commits to a piece of treasure, the more chance getting it. usually, but watch out for other sneaky Pirates! The Pirate with the most points at the end of the game wins, becoming the most notorious Pirate of all! 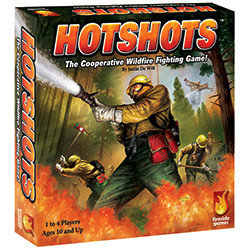 Hotshots is a cooperative, press-your-luck firefighting game in which 1 to 4 players work together, taking on the roles of wildfire fighters with special abilities. Roll dice to match combinations on burning terrain tiles. The more symbols you match, the better you fight the fire. Cut Firebreaks, press your luck to reduce Flames, claim Reward Tokens, and maneuver Vehicles to save the forest. Can you put out all the flames before 8 tiles or the Fire Camp scorch?

Professor Evil and the Citadel of Time 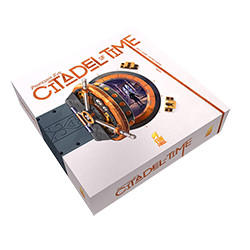 Professor Evil owns a time machine, and he’s been ripping off all the best historical items from times both past and future. Your team has been charged with working together to confiscate these items and return them to their proper locations in time, so you now need to infiltrate the mansion and abscond with four items before Prof. Evil can secrete four of them in locations inaccessible to you. 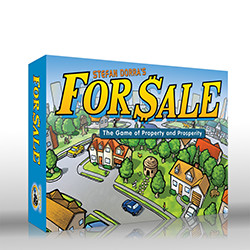 Going once! Going twice! Sold to the highest bidder! Bid and bluff your way to purchase the most valuable real estate for the lowest amount of money, then turn around and sell those houses (and shacks) for cold hard cash. Be the richest mogul at the end of the game to win this Stefan Dorra classic.

In this perfectly-crafted bidding game, players are forced to make a multitude of difficult decisions every minute…and that’s just in the first phase of the game!

In Werewords™, guess a secret word by asking “yes” or “no” questions. Guess the magic word before time is up, and win!
However, someone is a werewolf (knowing the word) working against you. If the word isn’t guessed in time, you can still win by identifying the werewolf! Another is a Seer (knowing the word), but has to be subtle helping; if the word is guessed, the Werewolf can win by identifying the Seer! 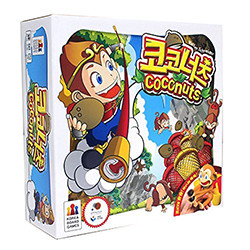 In Coconuts, players launch coconuts toward a field of cups in the middle of the playing area. Land in a cup, and you get to stack it on your player board; land in a cup on someone else’s board, and you get to move it to yours. By playing special “Monkey King Magic” cards, you can force opponents to shoot blind, take long shots, or otherwise bollix their efforts to cup a coconut. Whoever first completes a pyramid of six cups on his player board wins!

Monsters at the Legoblah! swamp prefer fast food nowadays. It’s quick, convenient and you can eat some of the most disgusting junk in the world. Business is good, but customers are extremely demanding; it is highly recommended you don’t keep them waiting.

Fast Food Fear is a game about a close-knit team of 3 to 6 cooks, engaged in a monstrous race against time. This is a cooperative fast reaction game. 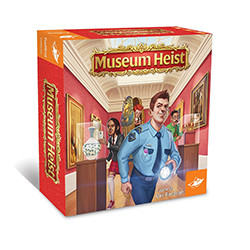 Museum Heist is a subtle game of bluff and deceit in which players assume a hidden identity in an effort to conceal their malicious moves and be the first to grab the museum’s prized possessions. 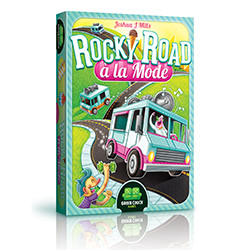 Rocky Road à la Mode is a game of managing time and resources to meet the demands of sweet-treat-seekers! The game features multi-use cards and a time track that determines the players’ turn order. The player whose ice cream truck is furthest back on the road goes next and may choose from several actions on their turn: stocking up on new treats, playing music over the loudspeaker to attract business, or passing out treats to fulfill customer desires. Every choice costs time and forces players to move ahead on the road track. Once a player is no longer in the rear of the pack, their turn ends until they find themselves lagging behind again. 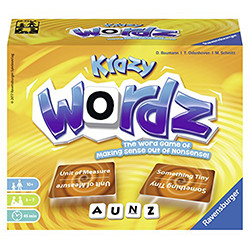 The word game of making sense out of nonsense!

GARBUNA? What is that!? An “Australian marsupial”? A “brand of chocolate bar”? Or perhaps “somebody remarkably smart”? This crazy word  fits only one of the Task Cards on the table. It may sound or look like it  fits multiple cards but it’s up to you to guess the correct one! Use your creativity and get the most points to win!

Junk in My Trunk 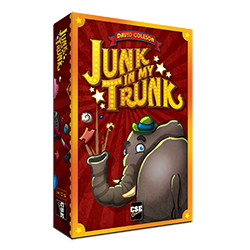 The circus is over and clean up duties fall to the elephants. To make the job go faster, these playful pachyderms made a game of the task! Using their trunks like vacuums, they suck up all the junk under the big top and blow it into the trash. Everything is blown into the trash until the circus is swept clean. The first elephant to get all of its JUNK out of its TRUNK wins the game. 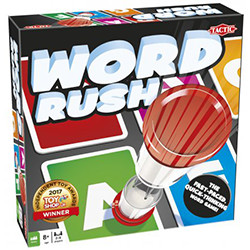 Word Rush is the new game of quick thinking words and categories. The categories and the starting letters for answers change in every round, so a renewed excitement continues on every turn. To play Word Rush, flip over a new category card and begin. Each player or team takes a turn to come up with a word that fits the category and starts with one of the letters visible on the board. Players have a limited time to come up with a word. If you can’t come up with a word you lose the round, and three lost rounds cost you the game. Coming up with words while the sand timer flows makes the game a thrilling race of wits! 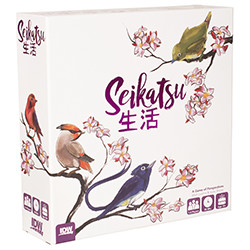 In the game of Seikatsu – a word that means “life” in Japanese – players plant a shared garden between each of their pagodas, and compete to have the most breathtaking view of the finished garden. Take turns drawing and playing Garden tiles that feature both a bird and a flower to create flocks of birds and rows of flowers, as seen from your pagoda. Who has the best view of the garden? It’s all a matter of perspective! 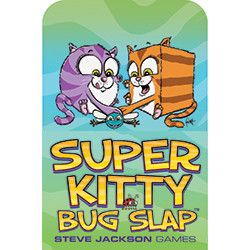 Pause and you lose! Only the fastest paws will win!

Grab the coolest cats you can find for some bug-slappin’ action in this speedy card game of quick thinking and swift paws! Super Kitty Bug Slap is a fast-paced game for 3 to 5 players, where slapping the right cards will put you in the lead, but slapping the wrong cards will send you home with your tail between your legs!

Doctor Lucky’s Mansion that is Haunted 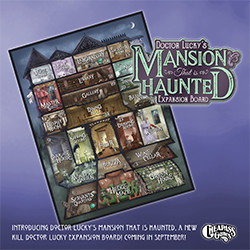 On this alternate board for the hit game Kill Doctor Lucky, Doctor J. Robert Lucky wishes to sell his haunted house to a pair of unsuspecting newlyweds from across town… but the ghosts of Lucky Mansion have a different plan. They love Doctor Lucky so much, they want him to stay with them forever. Unfortunately for the doctor, that means everyone is still trying to kill him!

We hope you’ve found a lot of game – and non-game – gift ideas over the prior weeks. If we were able to remove any amount of stress from your holiday shopping, then we consider it a win. Happy holidays from our family to yours!