Okay, I’ll be the first to admit that maybe that isn’t the best title for this gift guide, but I certainly didn’t have room to title it “Games to play when all your friends except one have other commitments”. I guess I could have titled it “Games to play on date night” but I REALLY didn’t want that turning up in the wrong kind of searches. We’ve all been in that boat where we want to play a game with a spouse or friend or even a coworker but it’s just the two of you. There’s always the stand-by of chess, checkers or some game with a traditional deck of 52 playing cards. As you try to figure what game sounds good, you both kind of shrug and say “meh”. We’ve put together some solutions to that problem by highlighting other 2-player games that span a range of themes and play styles. Check it out to find a gift for that person in your life that is constantly struggling to find games to play with one other person.

Of course, if you have a big group then we encourage you to look for gift gift ideas in our guide to party games. Family time or younger kids? Check out our gift guide featuring family games or guide to games for school-aged kids. Teens? We even put together a list of games for teens and adults. But if there’s someone on your list that travels alone, prefers down time with a spouse / loved one or needs the flexibility of 2-player games then this gift guide should be the perfect source for marking that recipient off your shopping list!

Curious for more details about one of the games listed? If you see the

logo, click on it to be directed to an in-depth review. If you don’t see it, just ask! 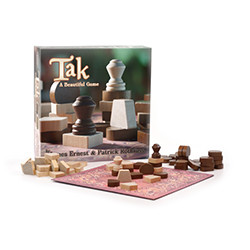 Patrick Rothfuss first introduced TAK in the second installment of the Kingkiller Chronicle, The Wise Man’s Fear. However, the rules were not introduced in the book, because at the time there were none! Ernest and Rothfuss have brought TAK to life in an elegant two-player abstract strategy game reminiscent of classics like Go and mancala. 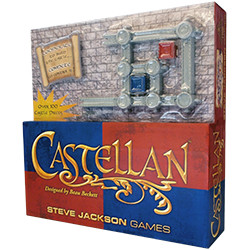 Two players work together to build a castle. Wall and tower pieces link to form courtyards. The player who finishes a courtyard claims it with a Keep. Your cards determine what pieces you get each turn . . . but you decide where to put them. If you’re clever, the pieces played by your opponent can end up scoring for you!

Castellan includes 110 detailed castle pieces and 28 cards, and plays in less than an hour. If you combine red/blue and green/yellow Castellan sets, you can play with three or four players. 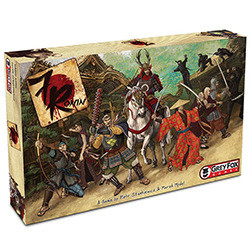 7 Ronin is great for couples or other players looking for a head-to-head challenge. In this 2-player game, one player controls a ninja clan seeking to take over a village, while the other player controls 7 samurai fighting them. Players secretly assign their ninjas or samurai each round before sending them out to battle. The ninja player wins by occupying five of the village’s ten areas, while the ronin player wins by surviving eight rounds. 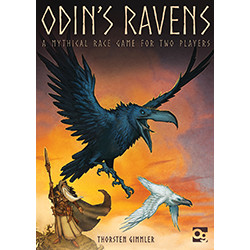 See magical ravens race around the globe against each other in this great card game for families and couples. Test your memory, skill, and speed of thought in this magical and thrilling game. 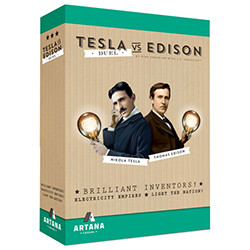 Tesla vs. Edison: Duel is a fun, easy-to-learn, 2-player card game that takes less than 30 minutes to play. Duel distills the epic War of Currents to its essence while still preserving all major areas of play from the original smash hit as you duel as Tesla, Edison, or one of six other amazing inventors to control the electric industry. But it is always AC versus DC. May the best current win!

In Atari’s Centipede, 2 or 4 players venture into the world of the classic Atari arcade game. On one side, a Player controls the Gnome, exploring the forest and trying to defeat the Centipede. On the other side, the Centipede player, eager to destroy the Gnome, must wiggle their way to the other end of the board.

The Gnome Player rolls and spends their dice to perform actions, while the Centipede Player uses a deck of cards to spawn Fleas, Spiders and Mushrooms, trying to control the game board. The first Player to eliminate their opponent wins the game! 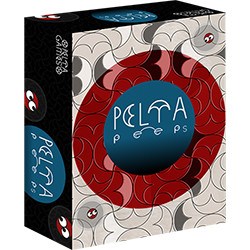 For all ages, PeltaPeeps for TWO combines making and breaking connections and shifting strategy to go eye to eye with other player Peeps. Easy to play, each turn, connect another playing piece to the growing board of PeltaPeeps. But watch out! Keep an eye on your opponent’s Peeps or try to make deals – it’s all up to you in a race to be crowned Royal Peltarc! BUY DIRECT! SAVE 25% on PeltaPeeps Arts Games and Tees with Code “LAUNCHPROMO” 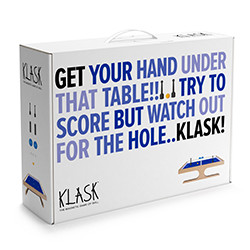 Klask is like a fast-paced table-top version of Air Hockey, only it uses multiple magnets and a small round ball. Players must use the magnetic handles under the board to control their playing pieces on top of the board. The object of the game is to hit the ball into your opponent’s goal without attracting the white mini magnets or landing your playing piece in your own hole!

Baseball Highlights: 2045 is like watching TV highlights of early 21st-century baseball games with a twist. In this quick and interactive game, two players build their teams as they play, combining strategy with the tactics as each player alternates playing six cards to simulate a full game’s highlights. Each game is a series of mini-games that includes defensive and offensive actions as your single card play may include elements of both. The team who wins the most mini-games in the series is the champ! 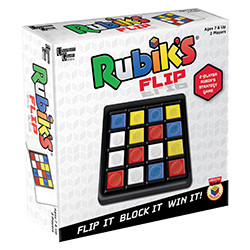 Flip It, Block It, Win It! Win or lose in only eight moves! Rubik’s Flip is a fast-moving, easy-to-learn, but challenging game. There are few rules and a maximum of eight turns per player. Every tile is two-sided with two colors. Just FLIP your opponent’s tile to another color, then place your tile. The first to place three tiles of the same color in a row wins! For 2 players, ages 7 and up.

As a reminder, many of these games will be showing up in our 150+ Days of Giveaways so if you see one that looks interesting, keep watch as it may show up as a giveaway. 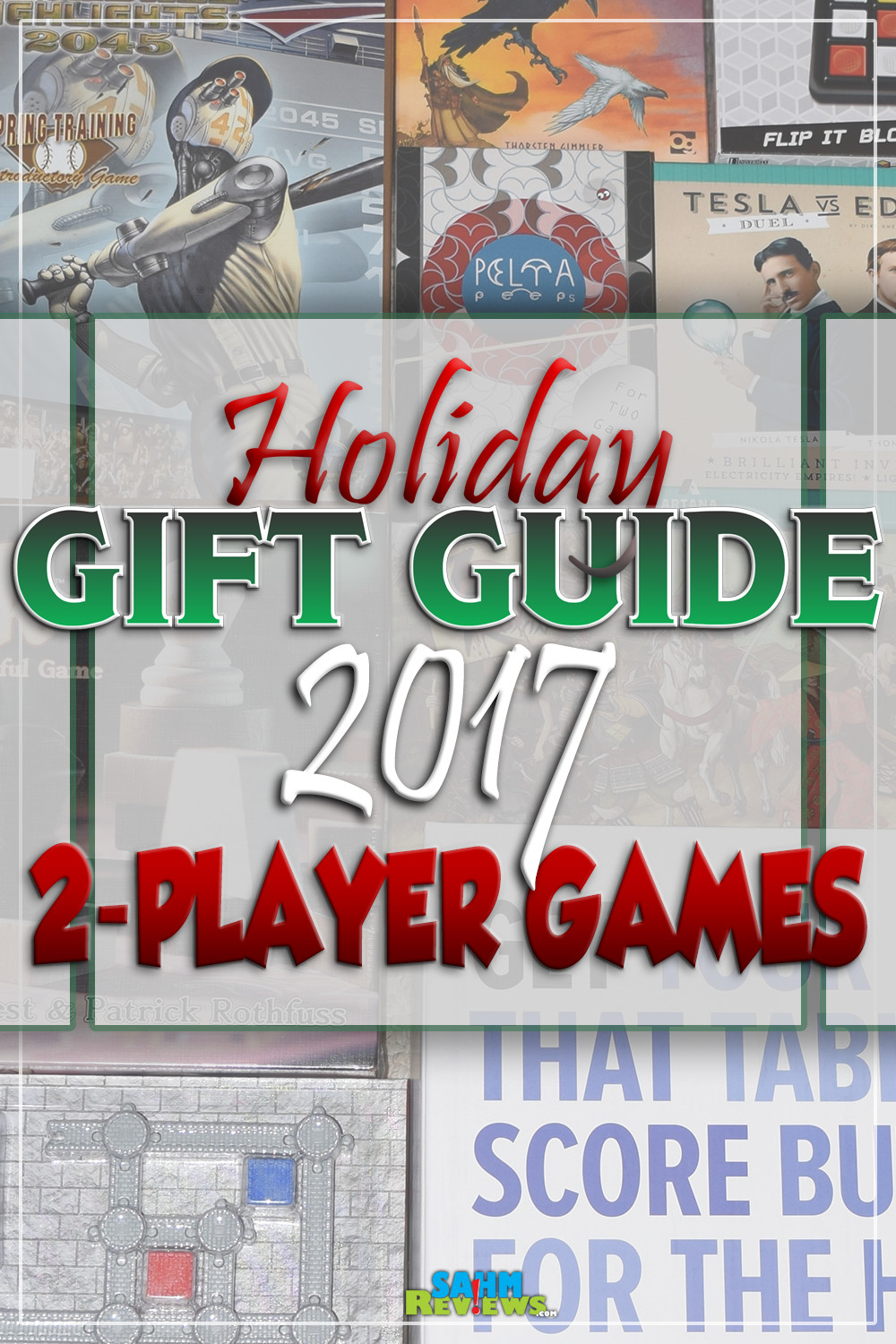