It is near impossible to keep up with the number of brand new board games being issued every year. By some estimates there are over 5,000 new titles released every twelve months. Here at SahmReviews we only have time to bring you what we consider the best of the best by featuring around 200 games every year. It’s a labor of love and I wouldn’t have it any other way.

You’d think that by writing about a couple dozen games each month that we’d have our fill of games to play. Happily that isn’t the case. We continue to back Kickstarter campaigns to get the extra goodies that come along with the base game and regularly find reason to spend gift cards on a brand new title at Toys R Us or our local game store. On more than one occasion we’ve bought a copy of a game we already own because we’ve played it so much we wore out the first copy!

And again, because of so many new games hitting the market all the time, it is hard to get real excited about a game (or series of games) that isn’t available for immediate purchase. But that rarity happened to me over the summer. I got wind of a brand new line of game by IDW Games that had my heart skip a beat or two. Not necessarily because it was rumored to be the next great thing in board games, but because it hit me “right in the feels” thanks to the chosen theme – classic Atari video games.

If you recall our article about Pinball Showdown, you remember how I was a classic arcade junkie. So many quarters spent on so many analog and digital arcade games. Super Breakout, Circus, Space Invaders, Zaxxon, Defender and of course, Donkey Kong Jr., all graciously took my weekly allowance and provided minutes of entertainment. But there was one game that stood above them all in my book because of its unique trackball controller – Centipede. And now there would be a board game based upon it! 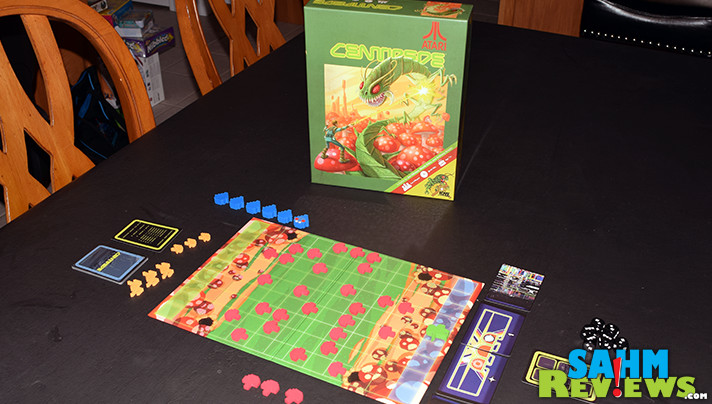 IDW’s Atari Centipede came home with us from this year’s Gen Con convention and hit our table almost immediately. Designed for 2-4 players, it really is best suited as a 2-player game since you need to play as teams if you have more than a pair of people calling “next”. Unlike the classic arcade game, in the Centipede board game players do not take turns simply shooting at the ever encroaching Centipede. In this version one player takes on the role of the mushroom-hunting gnome while the other gets to play as the Centipede! No amount of quarters ever allowed me to do that! 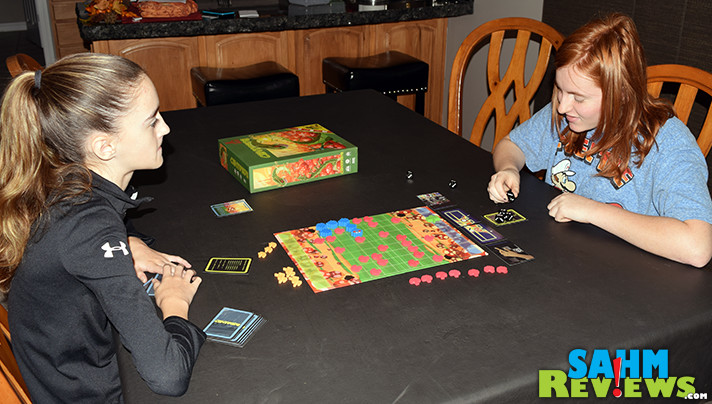 The play area on the board for the person playing as the gnome is limited to the bottom row. You will be able to move left and right, but never up or down. The Centipede player spawns his creatures from one of two spawn points towards the top of the board. Yes, the Centipede player will probably have more than one insect headed your way trying to eat you. 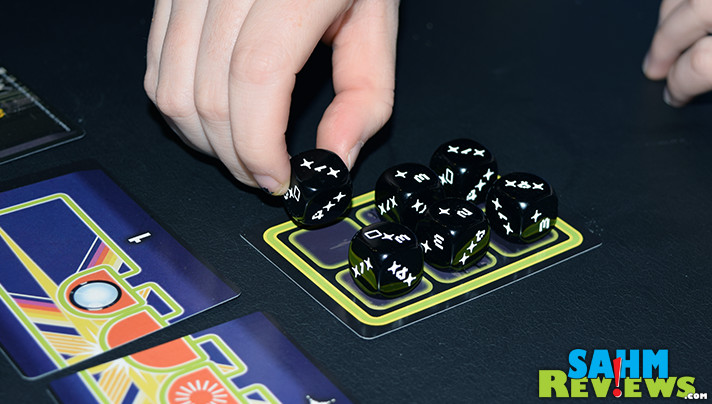 The gnome player rolls his six dice and places them on the included Dice Pool card. The results of the roll are what you have to choose from on your turn, then that die is removed from the card and cannot be used again. You also possess four Gnome Control cards that let you apply special effects to your turn, which again can only be used once until refreshed. The gnome player takes the actions listed on the face of their chosen die and performs them in order from left to right. A number indicates movement, which can only be in one direction. A star is a shot from your magic wand, destroying the first item it encounters. A card outline allows you to refresh (turn over) one of your previously-used Gnome Control cards. 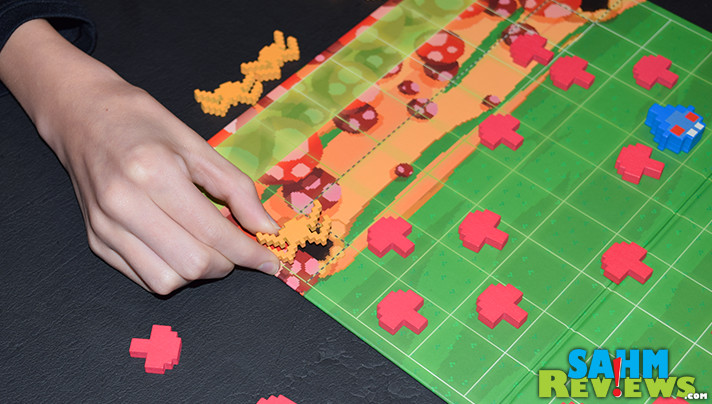 The Centipede’s turn is divided into three steps. First they play one card from their hand of three. These will vary from spawning a new Centipede, removing/adding a mushroom to the board, sending the Centipede into “berserk mode” or even spawning a spider or a flea! These additional bugs are also out to kill you and feature their own unique movement rules. 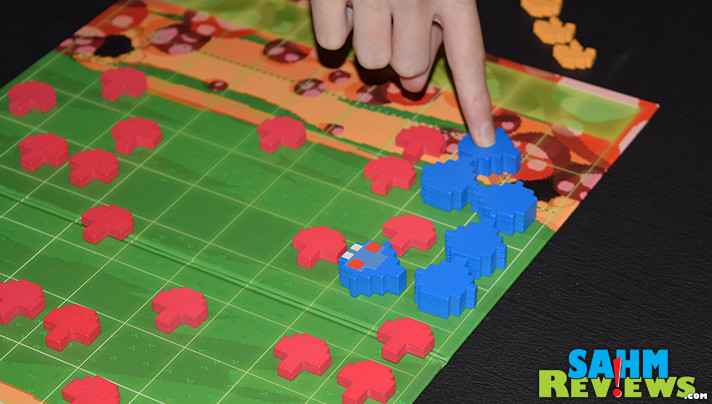 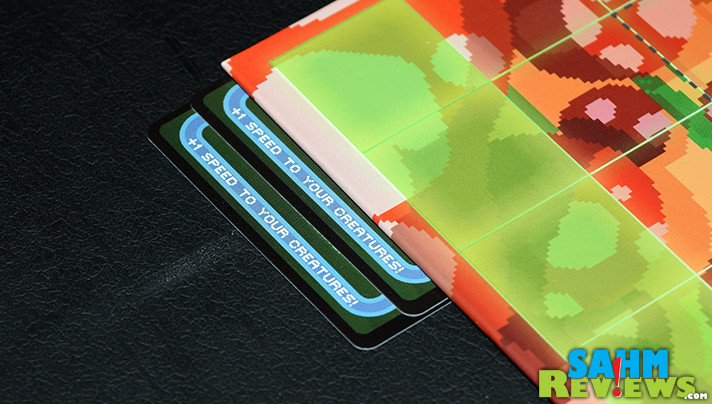 We found it quite fun playing both sides of the board. As a gnome you must strategically plan out your attacks. You don’t want to shoot a Centipede and split him in half, turning it into two separate bugs. Plus, the smaller the Centipede, the fast it moves towards you! To win, you simply have to rid the board of all Centipede segments, so you are free to ignore the spiders, fleas and mushrooms if you like. We wouldn’t recommend that strategy though. 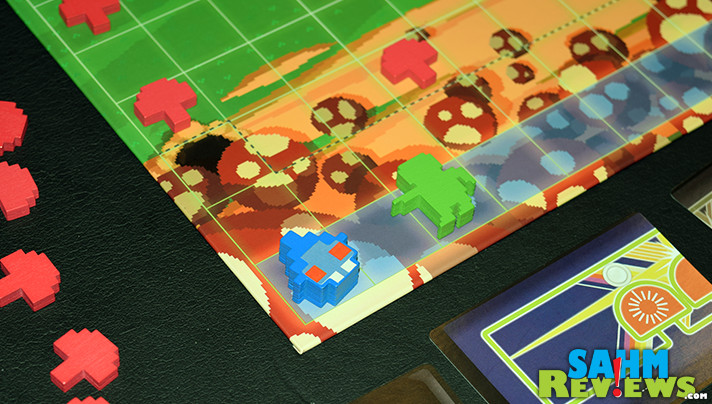 Playing as the Centipede is all about sending as many bugs as you can after the gnome. A complete insect onslaught designed to overwhelm the gnome player. Just like the video game. I would have paid double to play the arcade game as the Centipede if it meant sending my insect army down the screen after my little brother!

IDW Games’ Centipede is a fantastic conversion of the arcade game to the table top. I know I spent a lot more on the original Centipede than the $35 price you can find this version on Amazon. Rumor has it that there will be others by IDW Games in this classic video game series, so be sure you’re paying attention to their website along with their Facebook and Twitter timelines to find out which game(s) will receive the tabletop treatment!

What favorite video game would you love to see in tabletop form?