I don’t recall exactly how old I was when I saw my first pinball machine, but I do recall it was while our family lived in West Germany. Stationed in Worms, we traveled by motor coach every day to school 30+ minutes away in Mannheim for 7th & 8th grade. Our school was on a military base, and as such we were allowed to roam during lunch time. If we weren’t eating in the cafeteria, we were heading to the base bowling alley just down the road.

This particular alley had a huge arcade filled with video games and pinball machines. I had played both types of games before, but whenever I came across them, there were usually only a couple per establishment. This place had one full wall of 12+ pinball machines, and an equal number of video games on the opposite wall of this long, skinny room.

This was where I began playing some of my all-time favorite pinball machines. These were the first I had ever seen with digital backboards – all the others I had played had analog numbers on spinning wheels. Black Knight 2000, Xenon, Firepower and Centaur were all there, available for the whole lunch hour for a mere quarter.

While at the Origins Game Fair this year, I came across a booth by a small publisher, Shoot Again Games. What caught my eye was a sign advertising Pinball Showdown, a new card game making its debut. The box design instantly reminded me of my middle school lunch periods in that bowling alley. Pinball Showdown needed to go home with me.

Just as in a real game of pinball, in Pinball Showdown you are competing with up to three other players trying to amass the highest number of points before a ball is drained. Each person begins the game with a hand of ten Playfield cards, twenty Speed/Control tokens, a 2x token and a Player Aid card. The Speed/Control tokens are set into two piles – five with the Speed side turned up, fifteen with the Control side revealed. Random Combo cards equal to the number of players are also dealt face up to the center of the play area, giving you additional goals to shoot for. 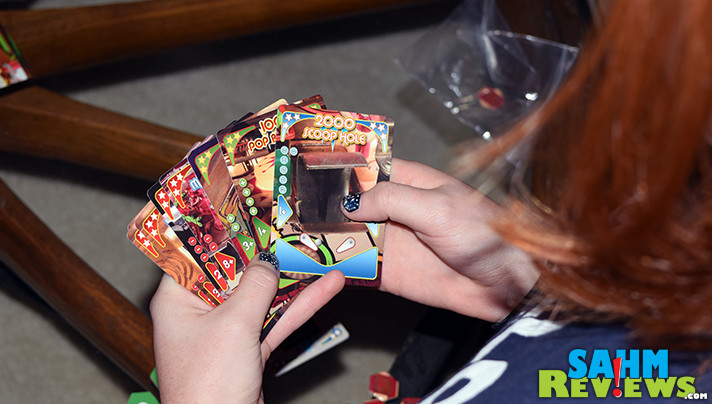 Pinball Showdown is played over a number of rounds, up to ten, with first player rotating after each round. At the start of each round the current 1st player, denoted by possession of the Bumper card, turns over the top card of the Playfield card draw pile. Everyone then selects a card from their hand and places it face down in a small stack next to the original overturned card. 1st player then mixes up these chosen cards and deals them out face up, creating a “store” that has cards equal to the number of players plus one.

Next it is time for everyone in turn order to bid on one card in the play area. A player may place one or more of their control tokens on a card of their choice. If the card already has tokens on it from another player, you may remove them by bidding a higher number of tokens. The displaced tokens are returned to the original bidder who may elect to turn any of them over to their speed side or keep them in their control pile. 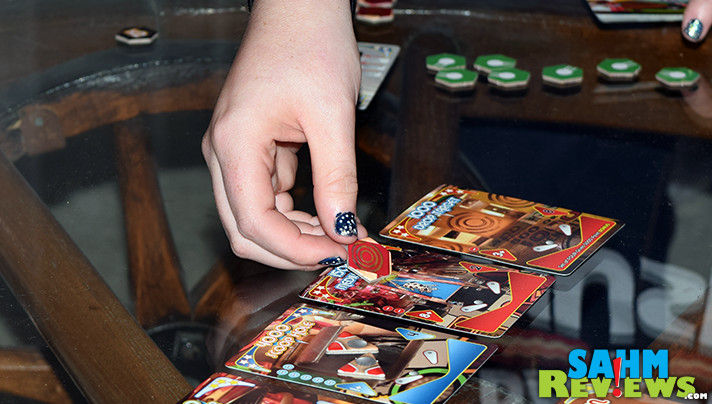 Once all bids have been placed, each high bidder claims their card, losing any bid control tokens permanently. They then check their current speed value (number of tokens turned to the speed side) and compare it with the value needed on the card. If the conditions are met, the card is placed into your personal scoring pile. If not met, not only do you still lose the tokens you bid, you also must flip speed tokens over to the control side equal to the number of circles on the card.

If a card is successfully claimed, you also get to resolve any effects listed on the side of the card. These can be converting tokens to their speed side, to their control side or setting your entire token vault to equal the number of speed icons listed on the card. At this point everyone checks their scoring piles to see if any of the Combo card conditions have been met, and if so, collects the card and also puts it in their scoring pile. 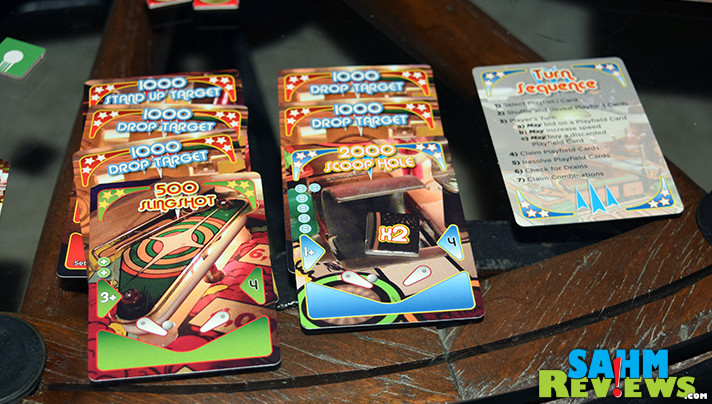 You might have noticed I mentioned “scoring piles” (plural). Any time a Combo card is claimed, the Pinball Showdown “table” goes into Wizard Mode. The next round is played in the exact same manner as the previous except all scoring is doubled. If you collect a Playfield card during this round, you put it into a separate scoring pile marked with your 2x token. These cards will score double at the end of the game. Wizard Mode only lasts one round unless someone collects a Combo card in the very next round or any player has a speed score of twelve or higher. This marks the end of the round and the 1st player bumper passes clockwise.

If any player’s speed is reduced to zero, one of two things will happen. If occurring during the first five rounds, “autosave” is in effect (remember those bumpers that would pop up between the flippers?). All that happens is you get to turn five of your control tokens over to the speed side. But if a player runs out of speed after the sixth round starts, then the ball drains and the entire game is over at the end of that turn. Otherwise the game runs for ten rounds when you finally run out of cards in your hand. 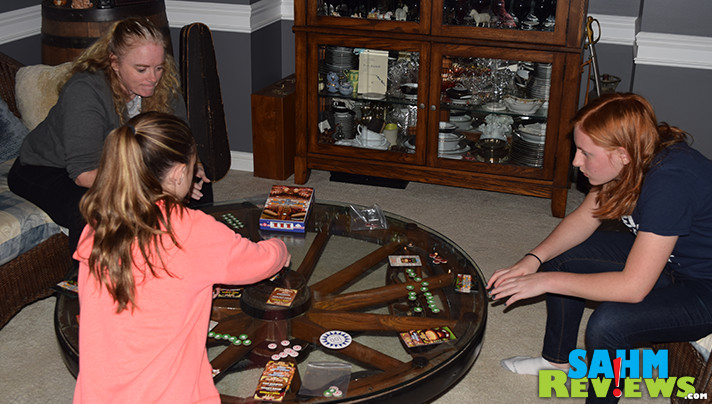 Points are added for all the Playfield cards collected in both your regular and 2x piles, adding any bonuses earned on the cards (bonuses are never doubled). Total in points gained from completing Combo cards and 100 points each for any leftover speed or control tokens, and the person with the highest score wins Pinball Showdown!

Shoot Again Games did a very good job applying the idea of playing an actual pinball game to a head-to-head card game. If you have someone in your family that grew up shoving quarters into these machines, I’m sure they’d appreciate receiving a copy of Pinball Showdown for their birthday or Christmas. Find copies on Amazon for under $23 or pick one up directly from the publisher. While you’re there, check out their Twitter and Facebook timelines to find out which convention they’ll be at next – they might even have a promo or two to go with their games!

Do you admit to being a pinball wizard?