Anyone who knows me would probably agree that I’m not an obnoxious person. Landing somewhere between the life of the party and a wallflower, I don’t partake in things like karaoke or activities that require liquid courage. Even when I’m upset, seldom will you hear me swear. I’m (usually) humble in my accomplishments; happy to redirect limelight whenever possible. I’ll cheer on my favorite teams, but am unlikely to be the first one to hoot and holler. I try to be respectful of others, of their feelings as well as beliefs, and praise their victories.

But when it comes to air hockey, all bets are off. The meekest parts of me fly out the window. When we moved back from California, we joked that our house-hunting checklist should have noted whether the home included a ping pong, pool, Foosball or air hockey table because pretty much every Iowa basement had one. I consistently had to remind myself that the air hockey tables didn’t come with the house and therefore shouldn’t be part of our decision making process. I reminded myself that I could always buy one and put in the basement of whichever house we purchased.

Unfortunately, I valued space more than I craved the need for an air hockey table. Instead, we play at entertainment centers while finding alternatives in board game form. We’ve played dexterity games like Pitch Car, Ice Cool, and Battledome. But the closest we’ve come is a throwback to our childhood with a vintage copy of Crossfire we picked up at the thrift store. That is until we discovered KLASK. It’s about as close to air hockey as I expect to find without losing valuable square footage. While it is smaller and uses a different mechanic, it offers the same anxiety and excitement as air hockey. 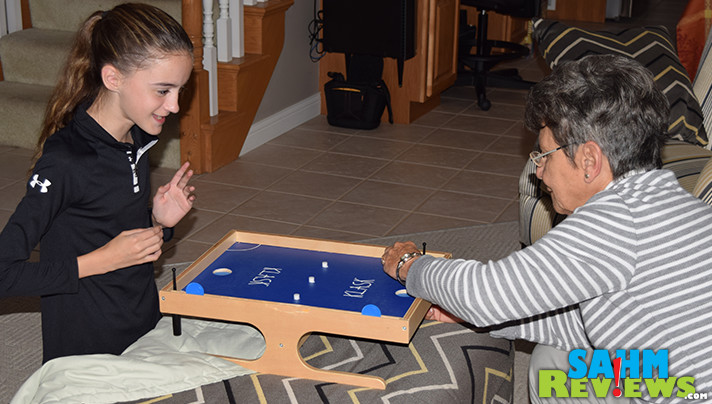 KLASK is a 2-player wooden game that looks like a tabletop version of something you might find in a pub. It consists of the elevated board, two 2-piece magnetic striking pegs, three barrier magnets and a ball. The goal? Be the first to earn six points. 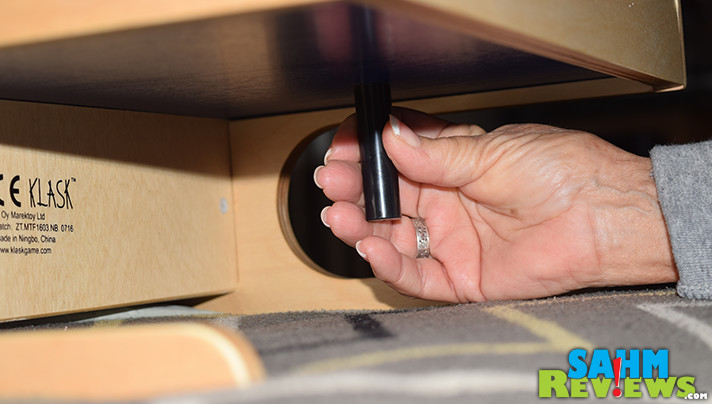 If you’ve ever seen those maze boards for kids where magnets are used to move pieces around then you already know the play mechanism in KLASK. The 2-piece striking pegs have half above the play area and half below, connected by… you guessed it… magnets. Unlike regular dexterity games where everything is done on the tabletop, in KLASK, control happens underneath the board. You’ll move the lower half of the striking peg around your half of the table while attempting to hit the ball into your opponent’s goal. 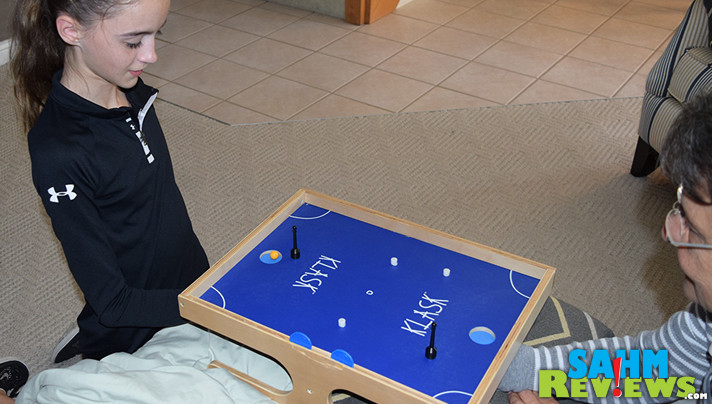 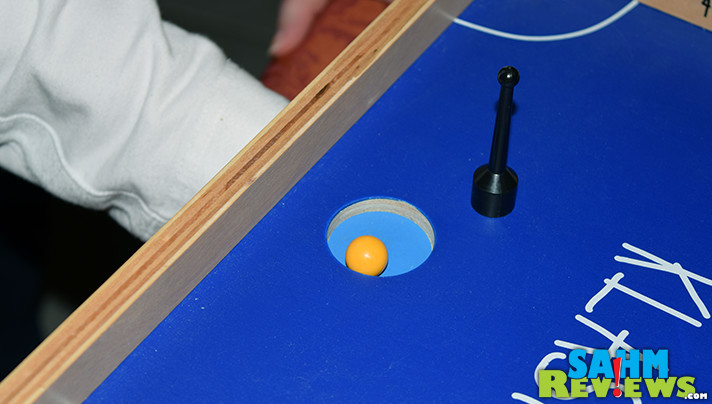 If you hit the ball into your opponent’s goal and it stays then you score. That’s pretty much the only way that you can earn points on your own. All the other methods for scoring involve things your opponent does. In other words, you’ll score points for your opponent when you goof up. 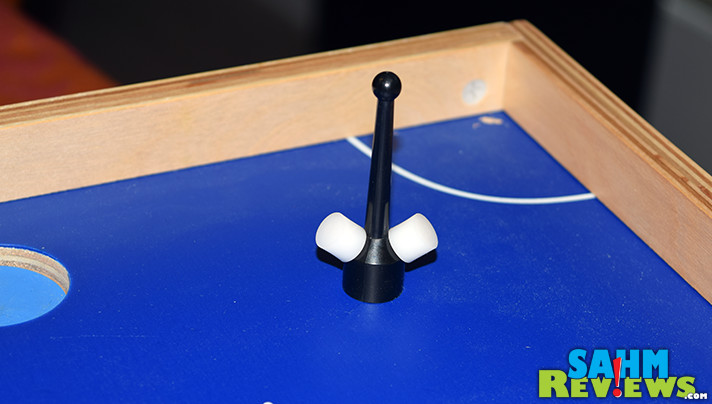 If you get to close to one of the white barrier magnetic pieces in the center of the table, it will stick to your striker. If two find their way onto your magnetic striking piece then your opponent is awarded a point. Of course, it can’t be as simple as avoiding the center of the table either. These small pieces are mobile and a bump from the ball will have them flying across the playing field. If you plan well, you can use them offensively!

If you accidentally move your striker across the area of your goal, the top half of the striking piece will drop into the goal. It will make an obnoxious noise (referred to as KLASK) and your opponent will immediately score. Sure, you might be able to maneuver it back out of the goal, but that doesn’t matter. Your opponent scores as soon as they hear KLASK.

Things will get hectic and crazy and no doubt you’ll start flailing your striking piece quickly in hopes of catching your opponent off guard, to prevent your opponent from scoring into your goal or in an attempt to dodge one of the flying magnetic pieces. If you lose control of your striker and can’t regain control with the steering magnet, then your opponent scores. Sometimes you’ll be able to recover it, but other times it flies onto the opponent’s side of the table. There’s a bar between the two sides that prevents players from entering the opposing side so yes, there will be times that you cannot recover it.

What I like most about KLASK is you don’t have to be a master at dexterity games to have a chance to win. You simply need to have fun… and hope your opponent is good at making mistakes. You can see more hilarious content from the KLASK team on their Facebook and Twitter channels. If you’re ready to add take on the challenge, pick up a copy of KLASK on Amazon or Target for under $50.