One type of game that is underrepresented in our collection are examples designed specifically for two players. Sure, there are the classics like Chess, Checkers or Go, but I’m referring to something more modern. We have featured a few of our favorites over the years, and some like Odin’s Ravens, Klask and Codenames Duet are still go-to games we grab when there are only a couple of us around.

With our girls firmly in their teenage years, their time is now split between school, homework, music instrument practice and much, much more. It is becoming harder and harder to get everyone to sit down as a family and play a game together. So when we discover an exceptional 2-player game, we’re excited to tell our readers all about it. Such is the case with the Asian-themed card game by iello, Ninja Taisen.

There have been a number of publishers that have produced games that are a variation of the classic game of rock-paper-scissors. Most recently we talked about Rock Paper Poker, a card game that amps up the basic game by introducing poker elements for scoring. Super easy to learn and inexpensive – two criteria that are very important to us (and you). 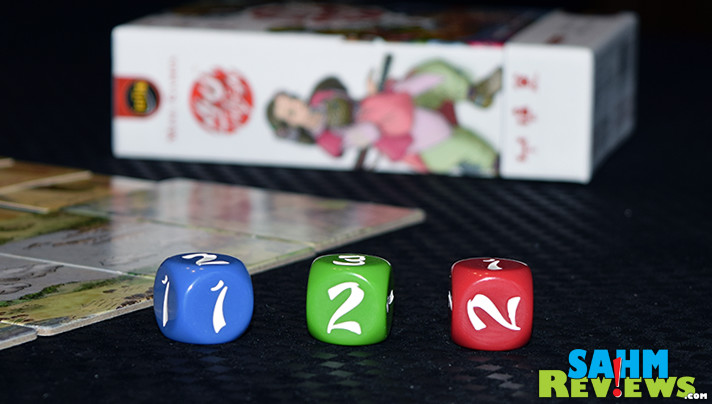 Ninja Taisen is also an inexpensive card-based game that utilizes the same mechanics of rock-beat-scissors, scissors-beats-paper, etc., but does so in a way that creates a strategic and engaging battle between two villages and their best ninjas, including their Shogun.

The goal is simple – get one of your ninja into your opponent’s village at the end of your turn. Sounds easy, but of course your opponent is trying to do the same! The small box includes 20 Ninja cards (10 for each village), 11 Battlefield tiles printed on thick card stock, three dice and a couple player aids. Setting up the game is a breeze – simply lay out the eleven Battlefield tiles in any order (or numerical order for better visual appearance), with the two village tiles being placed at either end. 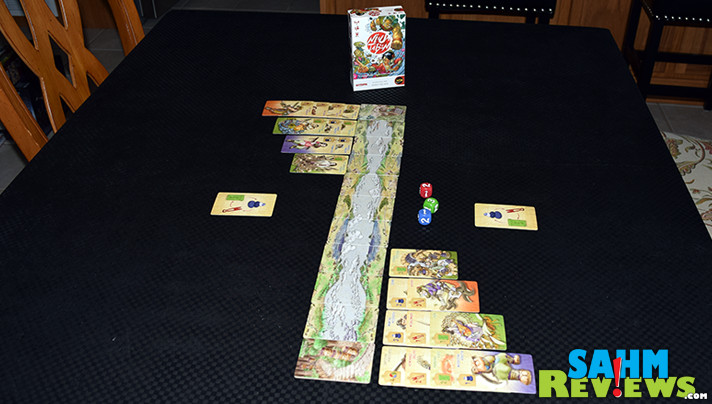 Each player places their Shogun card directly below their village and then shuffle the remaining nine Ninja cards. Three are stacked on top of the Shogun, three more dealt out below the next tile in the path, then two under the second path tile with the third tile having just one. Your opponent does the same on their side of the board, creating a similar setup with randomly-dealt cards. 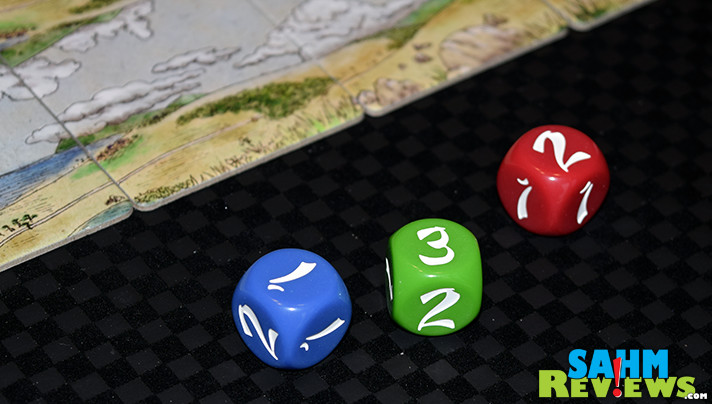 On your turn you will roll the three included dice. Each dice color corresponds to one of the card types (rock, paper, scissors). Select one of the rolled dice and move a card or stack of cards the matching number of spaces towards your opponent’s village. You must move a card that matches the die color, and may only move a stack of up to three cards total. 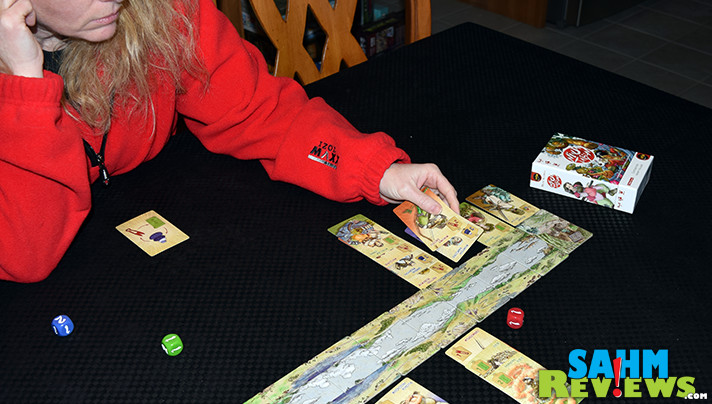 If your newly-moved cards are now directly across the path from an enemy, combat occurs. Your top card is compared to your opponent’s top card and resolved as you would expect – rock beats scissors, etc. If both cards are of the same type, then their numbers are compared, with the highest winning the fight. If there is still a tie, each fighter moves backwards one space on the path. Combat continues as long as there are cards on opposite sides of a tile on the path. Once all skirmishes have been resolved, you may choose to move again using a different die or elect to pass and have your opponent take their turn. 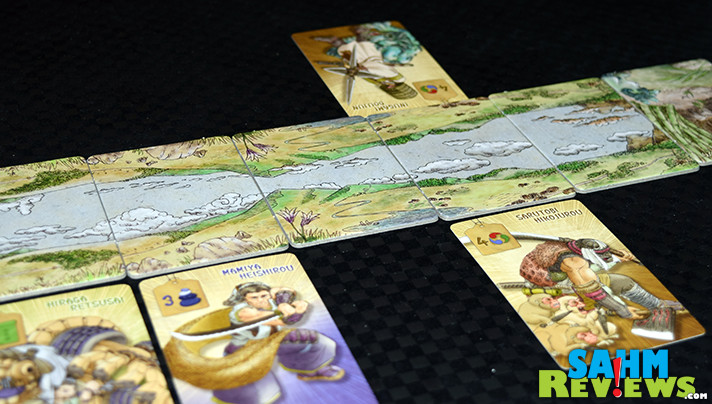 The Shogun cards work a little differently than the others. They can be moved by any color die, but only once per turn. They have the highest number (4) of any of the cards, but each time they fight in a combat, their number is reduced for every battle they participate in. For instance, if they knock out a level 2 Ninja, they enter their next fight as a 2 (four minus two). If the next Ninja is also a two, they now tie and move back a space. Once combat ends, the Shogun ‘heals’ and returns to a strength of four.

Other than retreating one space during ties, there is no way to move backwards. So once you get past all of your opponent’s ninja, it is a quick race to their village. As mentioned previously, the first person to get at least one card into the other player’s village at the end of their turn is declared the immediate winner of Ninja Taisen! 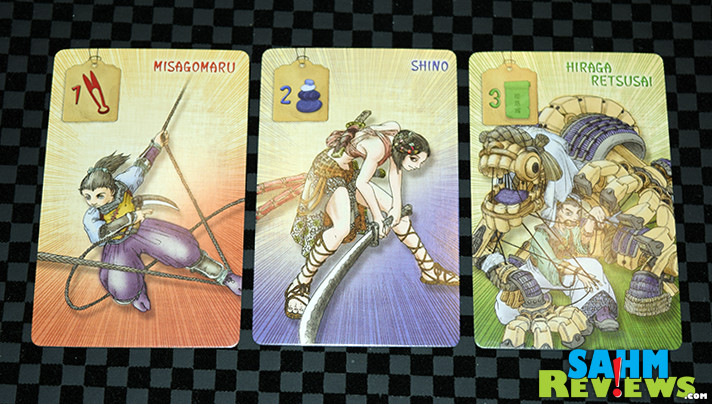 We were pleasantly surprised to find out that Ninja Taisen was much more than just a re-skin of rock-paper-scissors. While it does use that classic battle mechanic, that is only a part of the overall strategy of the game. You’ll need to carefully plan out your moves, considering both the suit and strength of each ninja, while also relying on the luck of the dice roll.

You’ve probably not seen Ninja Taisen for sale at too many places yet. It was originally issued in 2014 in Japan and only recently (May 2017) offered for sale by iello here in the U.S. Fortunately there are copies on Amazon for under $12 shipped, and I wouldn’t hesitate one bit if you are in the market for a solid (and portable) 2-player card game. I must admit, it looks like it will be replacing Odin’s Ravens in our game night bag!

Find out if iello is bringing more foreign games to the U.S. by checking out their website and following them on social media (Facebook, Twitter). They have two new titles being released in the next couple of months, both of which look to be very family friendly! Hopefully we’ll be able to tell you more about Fairy Tile and The Legend of the Cherry Tree that Blossoms Every Ten Years (that’s a mouthful) once they hit the shelves!