Dexterity games have seen quite a resurgence in popularity over the last couple of years. And by “dexterity”, I’m referring to games that require some type of physical skill in order to win. One example is Klask, where you need to move your pawn with a magnet and hit a ball into the opposite goal air-hockey-style. Another example is Zoo Ball, again a goal-scoring affair, but this time by flicking a disc across a felt play area. Wonky is still a family favorite which challenges us to vertically stack wooden blocks of “wonky” design. And Tumblin’ Dice speaks to both our love for rolling dice and our fandom of Olympic Curling.

Many forget that dexterity games have been very popular for decades. We regularly feature them in our Thrift Treasure series, and this week is no exception. We recently scored a copy of Identity Games‘ 2010 issue, Wobble. You might recognize them from the very successful Mouthguard Challenge, a title you’ll never see me play. Wobble is a much ‘cleaner’ game.

The large plastic Wobble board has a half-dome on the underside, making for a wobbly game (thus the name!). Much like Zoo Ball or Klask mentioned above, you are trying to score the included ping-pong-like ball into the goal. But your goal changes as the game progresses and may even match that of your opponents!

Each player (up to four) receives four pawns of different colors. They then place them on their edge of the board in any order they like. This represents the order (left to right) in which they must score their goals (blue peg = score in blue hole, etc.). Twenty weighted playing discs and four Wobble pawns are set next to the board and the six-sided die is given to the first player. 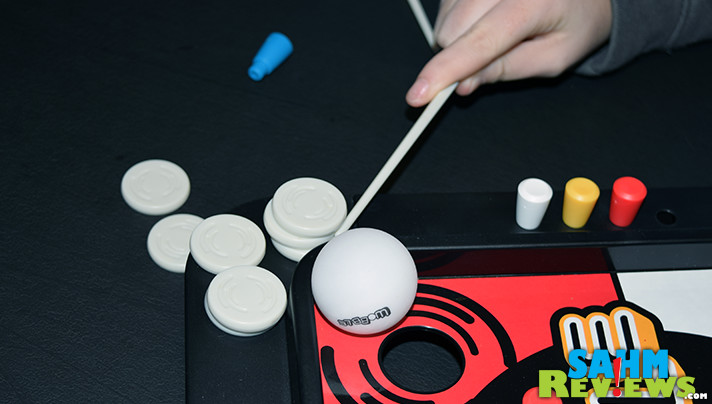 The result of their roll determines how many discs they may engage with on their turn. For each pip on the die you will either place a disc on the edge of the board or use the included game stick to remove one disc from the board. Each disc placed or removed will affect the overall balance of the Wobble board and cause the ball to roll towards a side or corner. 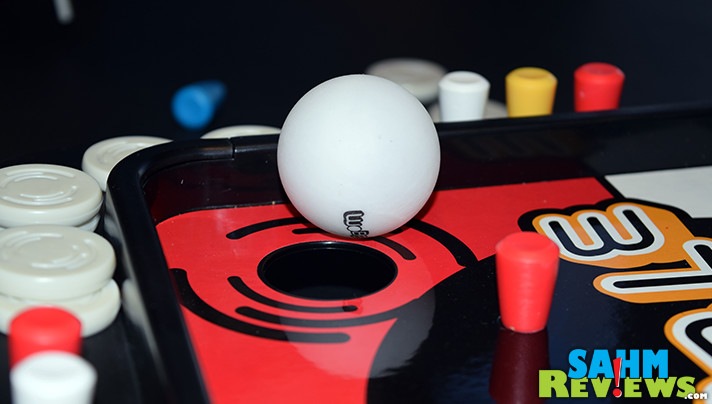 If you manage to get the ball into the hole of your current color on your turn, remove the pawn from your side of the board and put the ball back into the center of the board and continue playing with any moves you have left, or if out, on to the next player. If the ball goes into a hole that is not your active color, you lose the rest of your turn and the ball is reset to the middle. If there is no score at all, the ball simply remains on the board where it rests and the next player takes their turn. 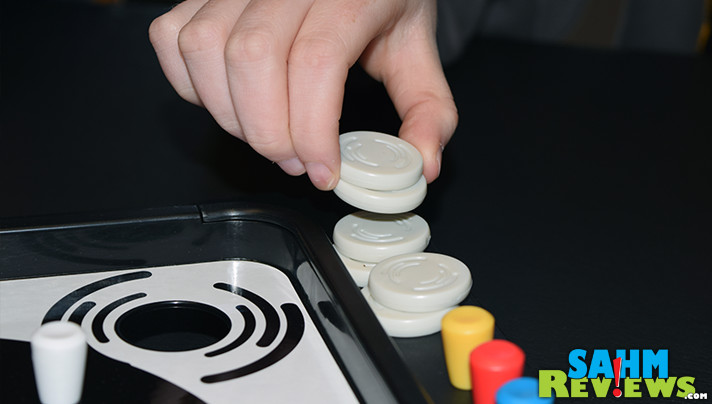 When placing your discs, there are very few rules for how to do so. You can drop them from a higher location to force the board to react or Wobble. You can place more than one at a time or even on top of previously-placed discs! The only rule is the disc must come to rest on the edge of the board. If it falls off or otherwise leaves the play area, it cannot be retrieved and replaced.

When rolling the die, if you get a “1”, something special occurs. You still get to play your one disc, either adding or removing from the board, but you also get one of the Wobble pawns to be used immediately or saved until a later time. These are played in a similar manner as the discs, but they weigh quite a bit more. The limitation is that you may not have more than one pawn in your possession at a time. 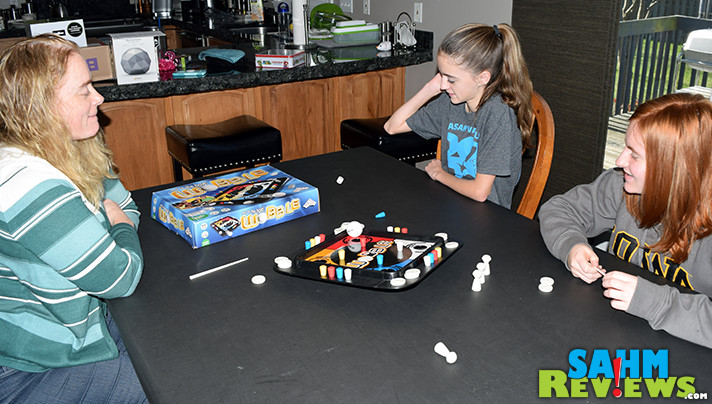 The first player to successfully remove all of their player pawns from the board is the winner of Wobble. We played with just two players and found it much less exciting than our rounds with four. With the full compliment of participants, the board moves in different directions each time and it becomes next to impossible to plan out your move since the board’s position will certainly change by the time your turn comes around!

Wobble can still be found brand new on Amazon for under $22 shipped! It’s a fun, quick-to-learn game that is different enough from anything else in our game collection. It’ll be making the trip to our local game nights on more than one occasion!

Do you have a current favorite dexterity game?