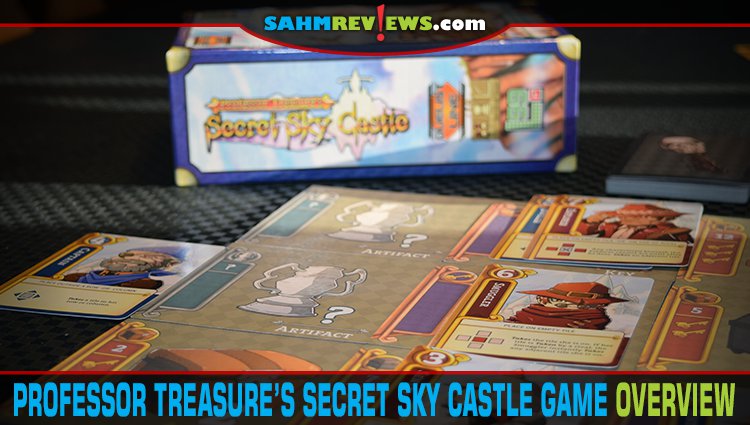 One positive side effect of national efforts to curb the spread of COVID-19 is that more and more people are discovering new things to do with their families. Besides the typical home improvement projects, our social media feeds have been full of crafts, cooking, puzzles and games. Modern board games have been the highlight, with many families experiencing the joy of playing titles like Ticket to Ride or Dominion for the first time.

The most common thing we’ve been asked as pseudo board game experts is if we can make a suggestion for a good 2-player game. Many games support two players, but we’ve found that those specifically designed for only two provide the most fun and best experience. A couple that are high on our recommended list are Pyramid Poker, Hanamkoji and Hero Realms. Of course I have to give a shout-out for my own game, Gekitai, which can be downloaded for free on BoardGameGeek!

Level 99 Games has their own line of 2-player games called their “Duelist Line”, and we’ve talked about Sellswords and RESISTOR_ in the past. Last year they debuted the latest in the line, Professor Treasure’s Secret Sky Castle, and it’s become one of our go-to games during our self-imposed quarantine. 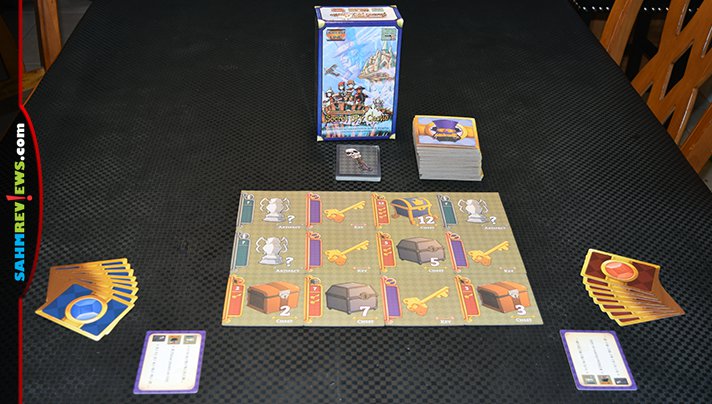 First, a warning. Don’t get intimidated by the poster-sized rule “book” included in the box. Take a moment to read through this overview, watch a Youtube video or scan the QR code in the rule book to get a better sense of the game and how it is played. Then, set it up by giving each person a matching set of eight Role cards in red or blue. Each player will randomly discard two of them and arrange the other six into either two sets of three cards or three sets of two, depending upon whether they are first player or not. The 36 Castle tiles are shuffled and twelve are dealt out into a 3 x 4 grid in the center of the play area. The remaining will be used for the other two rounds and are set aside for the moment. Lastly, a deck of Skeleton Key cards is also set close to the grid and a reference card is given to each player. 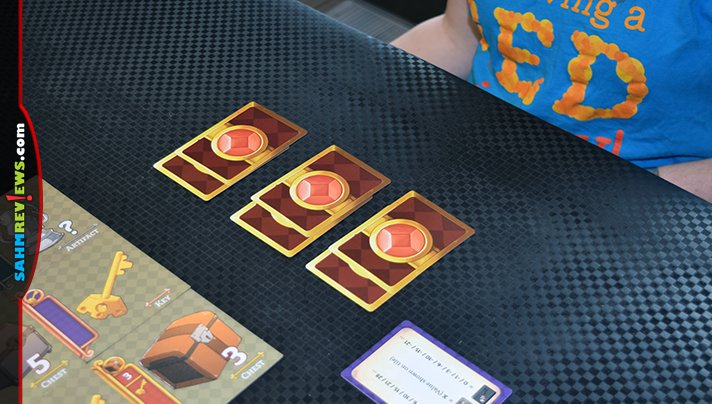 The Castle tiles in Professor Treasure’s Secret Sky Castle are of three types – keys, artifacts and chests. You and your opponent are treasure hunters raiding Professor Treasure’s Secret Sky Castle of all its treasures by sending in your team of characters after these tiles. Beginning with the first player, they will play one set of two cards to the grid. The other person will play one set of three cards. 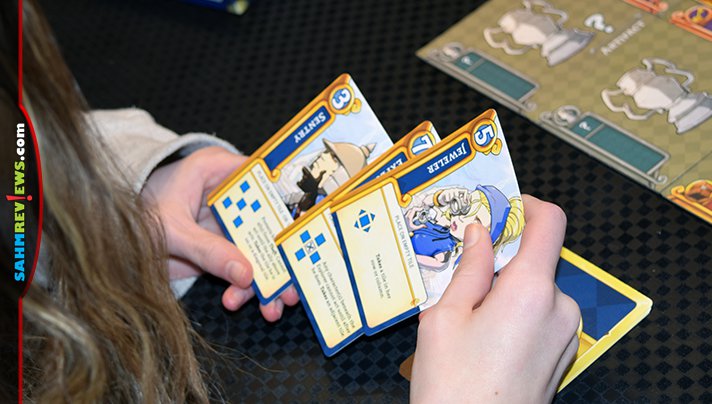 Each Role card tells you where it can be legally placed. Some are placed only on empty tiles, others underneath other cards. A couple cards don’t go in the grid at all! Instead, they are placed on the perimeter. Cards also have a number on them which determines the order they will be resolved. Beginning with the lowest number and preference going to the first player, card effects are activated in order after both players have played all six of their cards to the grid. 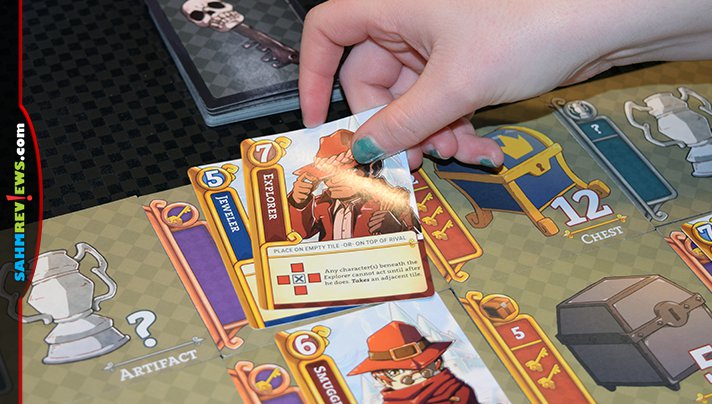 These effects will alter the layout of the board and determine which, if any, tile you will collect. Cards underneath other cards are delayed until the one above them has been resolved. As mentioned previously, you will collect one of the three card types. Artifacts are worth points at the end of the game depending upon how many you own in total. Chests are valued at the number shown on the tile and must be opened immediately. In order to open them, you must have keys! Key tiles are worthless in terms of points and are spent on chests. If you don’t have enough keys to open a chest when you pick it up, you must take Skeleton Key cards equal to the number of keys you are short. These earn you negative points at the end of the game! 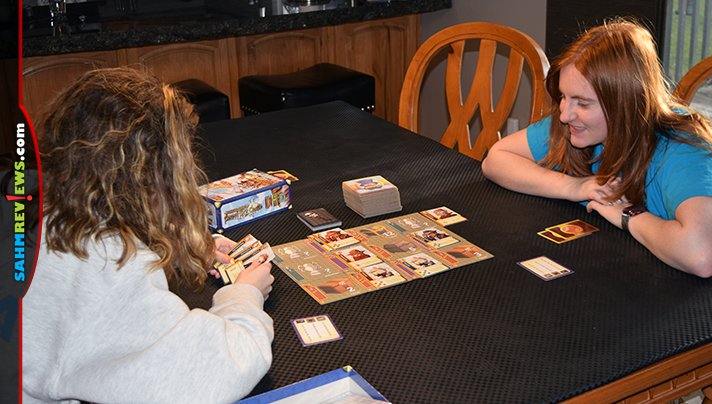 Any tiles not collected in the current round remain in place before dealing out a new grid of twelve for the next round. Key tiles that you used are flipped back over and may be used again this round on a new chest. After three full rounds of Professor Treasure’s Secret Sky Castle are played, points are talliedand the person with the highest overall total wins! 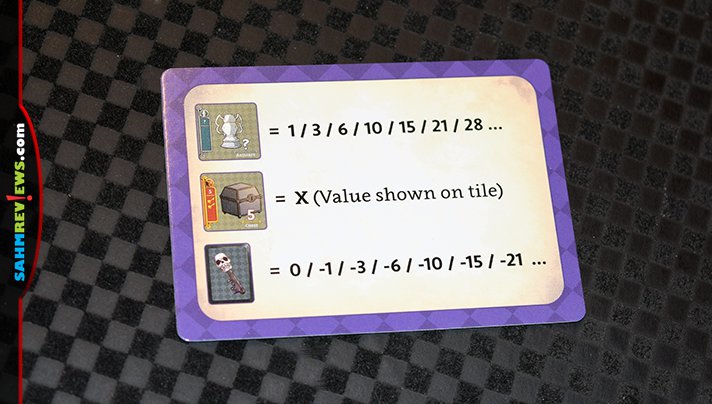 Because each Role card performs a different action, which sometimes conflicts or is affected by another Role card, you’ll spend more time planning out how the position of each card interferes (or avoids) your opponent’s. Overall, Professor Treasure’s Secret Sky Castle is still a quick game which is usually completed in well under 30 minutes.

If you’re in the unfortunate position of having your local game store closed due to COVID-19 and they’re not making deliveries, you can still find Professor Treasure’s Secret Sky Castle on Amazon or direct from Level 99 Games. Find out what is planned next in their Duelist Line by following Level 99 Games on Twitter or Facebook!

Would you go for the Artifacts? Or the Chests?