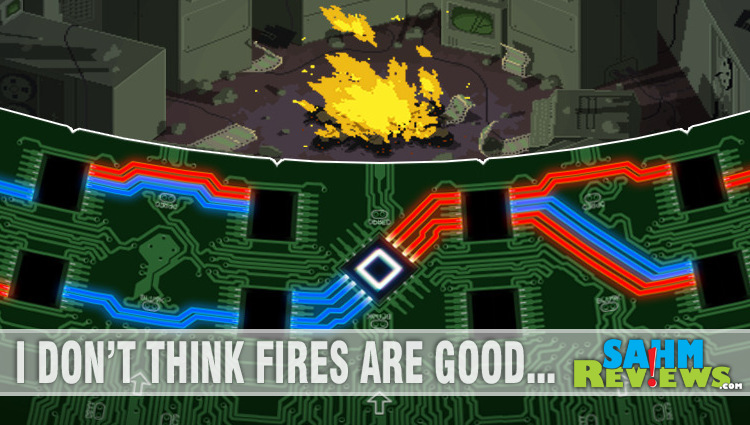 We’ve talked endlessly about our schedule and how little time we’ve had lately to actually sit down and play longer games. That doesn’t mean we’ve given up gaming altogether, it just means we have to squeeze in shorter games or limit the number of players so we can get our fix. This is exactly what we did when we discovered Blood of an Englishman.

We’re still trying to discover a strategy that allows the giant to have a fighting chance, and we’ve been assured by the publisher that it is indeed a balanced game. We just haven’t mastered that character. In the meantime we were introduced to another 2-player card game by Level 99 Games that isn’t asymmetrical. Each player uses the same ‘board’ and has the exact same actions (and can actually use the other player’s cards)! With no doubt, Resistor_ should be perfectly balanced. 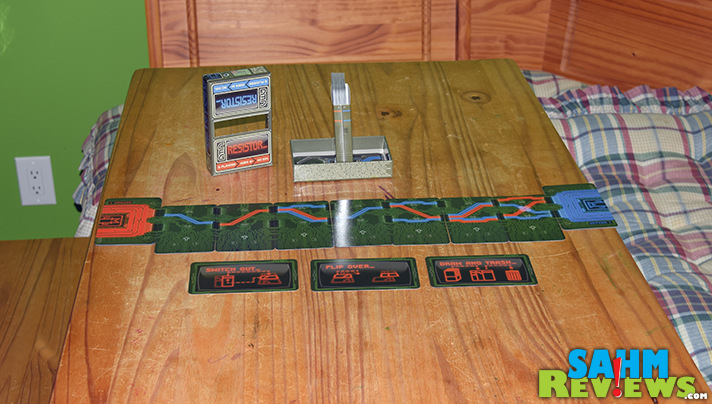 The theme of Resistor_ was very interesting to us as we have both a niece and nephew attending the University of Iowa and majoring in Electrical Engineering. So while it would appear we have all of our electrical needs taken care of for the foreseeable future, we figured we’d better brush up on some of the terminology so as to not look completely clueless.

Resistor_ is a 2-person card game where each player acts as a supercomputer from enemy countries attempting to initiate their nuclear launch sequences while at the same time hacking into the other one to prevent them from launching their own missiles. This is done by using the 50 tarot-sized playing cards to build a direct link in your color to the opposing computer. 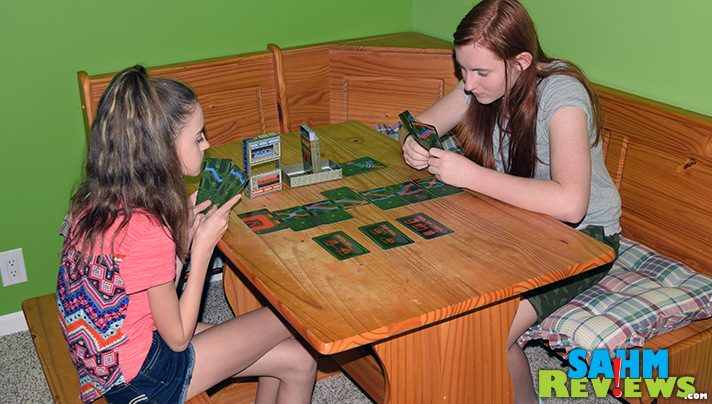 At the beginning of the game, each player lays their own colored Mainframe Card in front of them, set at DEFCON 1 (the lowest warning level). Seven cards are dealt out, making a connecting pathway between them. The rest of the cards are shuffled and put into the included box which hides the content of the cards. Did I mention the cards are 2-sided?

Each card has a different electronic pathway on each side (or a resistor). Your goal is to play them so your color of path reaches your opponent, forcing them to increase their DEFCON level by one. Both players draw a hand of two cards without looking at the opposite side. Thus, your opponent can see the backs of your cards while you can see theirs. 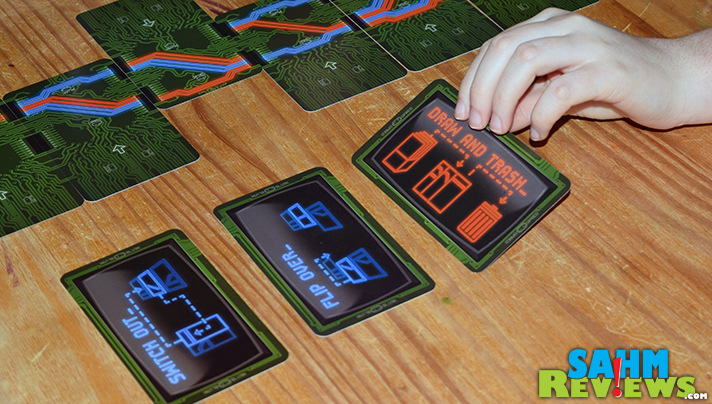 During a turn of Resistor_ you will take a total of three actions, tracked by included cards which are flipped when you perform that action. Actions may be taken in any order, but only done once per turn. You can Flip Over one of the cards on the board, using the back side to make the new connection. You may also Draw and Trash by drawing one from the deck and adding it to either player’s hand. You would then choose which card from that hand of three to now discard. 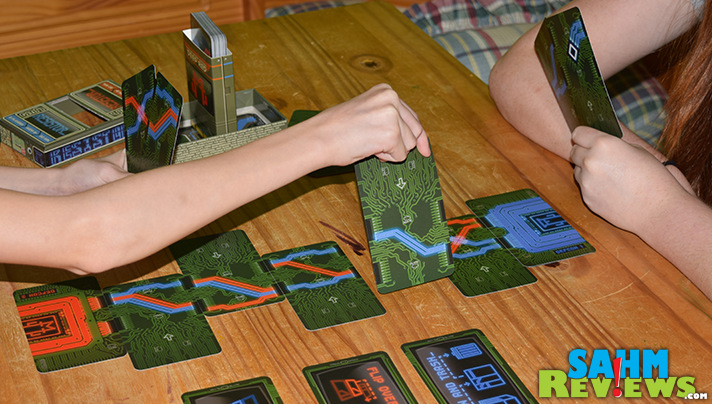 The last action is to Switch Out, which is to simply take a card from the board and put it in either hand, replacing it with a card from that hand. In all action instances it is important to keep track of the side facing you, as that is the side that will be played face-up on the board.

At some point special cards with a resistor will be played. When they hit the board, if either player has a connected line of their color that runs from the resistor back to their Mainframe, that player reduces their DEFCON level by one. That resistor card is then removed from the board and the remaining circuit cards are connected by moving them closer together (there is now one less card in play on the board). 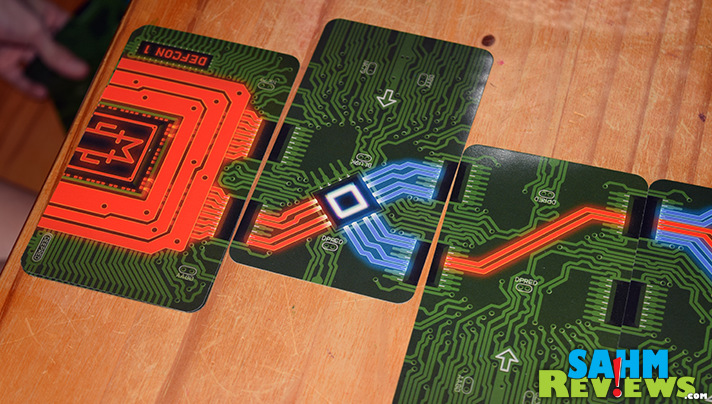 After each player’s turn, the board is checked to see if either player has a line of their color connecting the two Mainframes. If so, that player scores a point, upping their opponent’s DEFCON level by one. If your opponent was already at DEFCON Level 4, you win Resistor_. The game can also end if the entire board is reduced to just one card by means of too many resistors being played. In that case, the person with the lowest DEFCON level wins. In the case of a tie, you both lose! 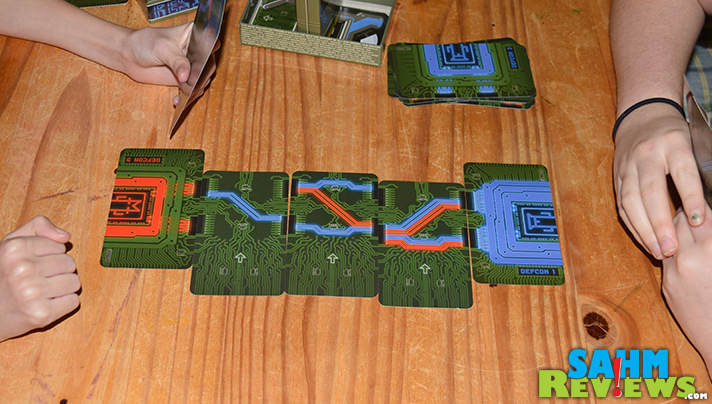 With each game lasting only 15-20 minutes, we really enjoyed the head-to-head challenge of Resistor_. It reminded us a lot of a classic game of tug-of-war, but with a technology-enhanced twist. And at only around $17 on Amazon, a great value if you’re in the market for a solid (and balanced) 2-player card game.

We’ve highlighted a couple Level 99 Games titles in the past, most recently the card battle game, Pixel Tactics. They’re working on a couple new titles, including one in conjunction with Penny Arcade, so be sure to watch their Twitter and Facebook timelines for up-to-date information. And tell them you want to see more of their library highlighted here on SahmReviews!

Do you prefer card games that support only two players? Or do you want more in a game?