We were at a restaurant the other night and lo and behold, the waitress seemed to forget about us. I understand when things are busy it is difficult to juggle all the customers, but how hard is it to ask if we need refill on water? It’s not like we were asking for special instructions for our meal or trying to change something after we ordered. We already had our food and simply wanted a refill. Nothing more frustrating than not being able to enjoy your meal because it’s spicy and you have nothing to wash it down.

Except of course, not getting served at all. Or getting something served so late that you’re already at your boiling point. Those are kind of deal killers too. Therein lies the premise behind Cavern Tavern by Final Frontier Games.

We’ve seen themed restaurants before, but this one takes the cake. Mmmm… cake. Oh sorry, this one isn’t about cake. It’s a tavern… in a cavern! It takes place amidst a war when Nasty, the dwarf bar owner, runs an establishment. Patrons come from the five realms all abiding by an unwritten truce. It’s not a safe haven from the war but rather a temporary escape where criminals hide from the law and shady businessmen handle their affairs. Nasty the Dwarf tries to keep all his patrons happy and expects the serving staff (that’s you) to do your job and do it timely. Really? That’s not too much to ask of an employee, is it? You’re no innocent staffer as you, yourself, crossed paths with the tavern in your efforts to avoid whatever it was you needed to hide from. Your one task is to keep the drinks flowing, in a timely manner at that. 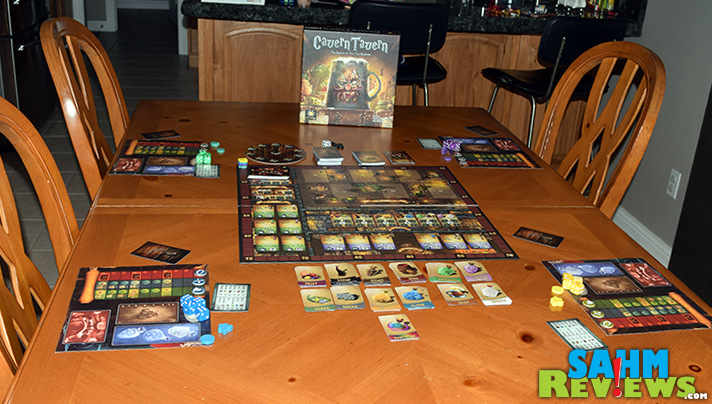 Cavern Tavern can best be described as a worker placement game using dice. The play area consists of one main board as well as individual player boards. The individual boards are where servers store their open and completed orders, unused ingredients and a tracking system for their three independent reputations in the kitchen, with chores as well as with the boss himself. The main board includes the cellar for available ingredients, a mess hall for patrons, Nasty’s office, the kitchen and a chore board. There’s also a wizard’s workshop that offers special opportunities to collect helpful items, replace orders and grab magic potions. With the exception of taking orders, other activities require players to spend dice to perform the action.

The game runs for 10 rounds, each round consisting of multiple turns. The server with the most points at the end claims the title of victor. There’s a clock that tracks the rounds which means there’s also a clock that tracks how long it takes servers to provide the orders to their customers. 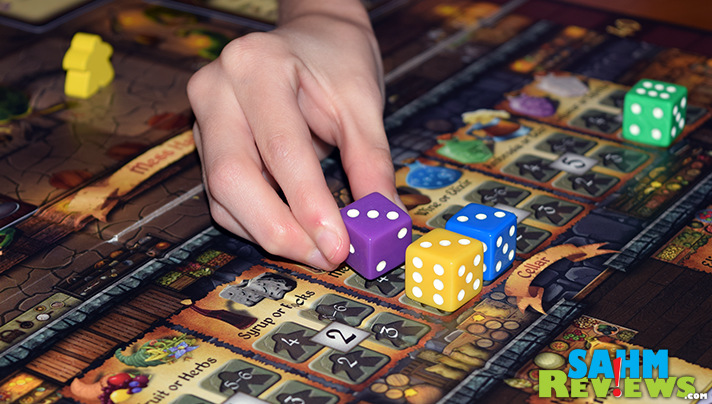 On a player’s turn, they may take and order, play an item card, place dice and complete orders.  You can do them in any order and as many times as you like with the exception of playing dice which can only be done once per turn. 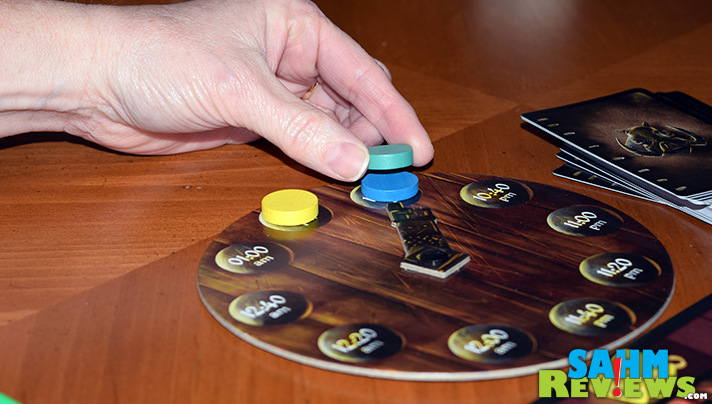 Patrons are the primary focus of the game and happy customers offer better rewards than unhappy ones. When a player takes an order, they leave a marker indicating what time they accepted it. When you finish an order, the points and bonuses awarded are based on the number of rounds it took to complete. For each round that passes without completing the order, the customer gets angrier (and so does Nasty) and thus will give less victory points for the order. In addition, these actions decrease your reputation which will cause you to get called into Nasty’s office for immediate disciplinary action as well as the loss of points at the end of the game. 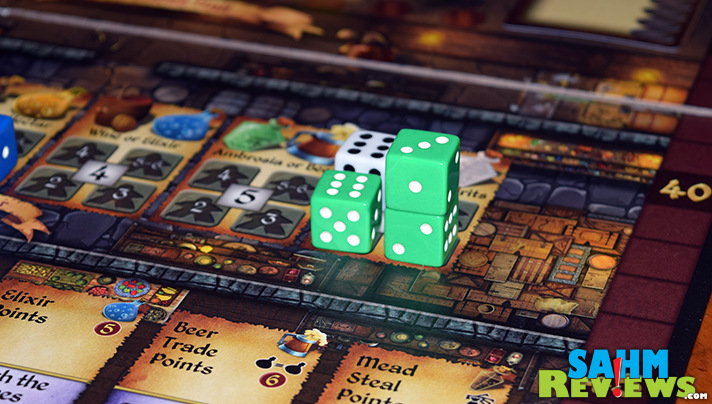 So long story, short – plan your order choices carefully. You begin each round with an order or by selecting a new one, but the dice are how you purchase ingredients. If you’re looking to take an order, pay attention to what you rolled and whether or not you’ll be able to “afford” the ingredients required. If you don’t have the six you need to get those spirits you needed, opt to play multiple dice that add up to six! Of course, you can work in the kitchen and do chores to improve your reputation in those areas which will provide you with in-game bonuses to help accomplish future tasks. Those particular tasks require totals of more than one die. Some require a specific amount such as 18 while other spaces require a designed quantity of dice that display any value. There are multiple options but ultimately, the goal is to fill drinks and make customers happy! That’s really as much as there is to playing Cavern Tavern. Simple to learn but with decent strategy and planning required to win. 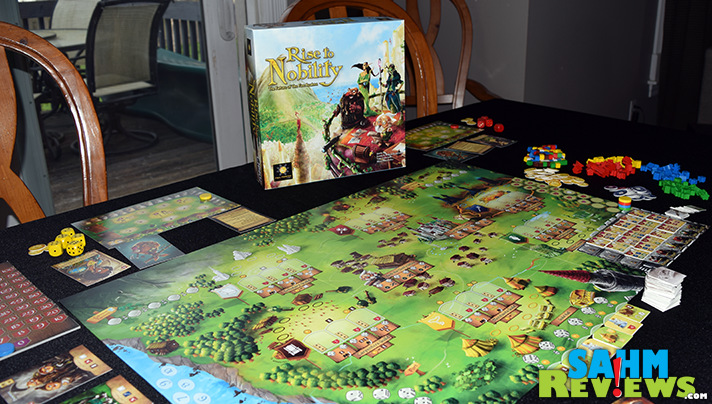 The popularity of Cavern Tavern was encouragement for the team at Final Frontier Games to release a sequel. In Rise to Nobility, The Future of the Five Realms, players are striving to earn a place on the Stone Council in the city designed to unify the races of the realms in a post-war period. Please note that we got our hands on a prototype copy so don’t put weight in the component quality when deciding if this might be a good fit for you! 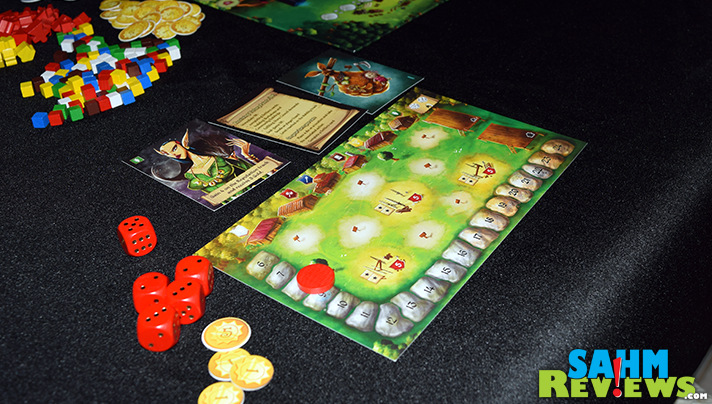 The concept of the game is similar to Cavern Tavern, not only in the theme but also the use of dice-based worker placement to achieve various goals. The goals, happening simultaneously, include attracting, housing and finding apprenticeships for settlers of the realms as well as aiding their efforts to become Guild masters. In addition, players work to establish a positive reputation and nobility with the queen and kingdom because when it comes time to vote on a new leader of the council, having friends in high places can go a long way. 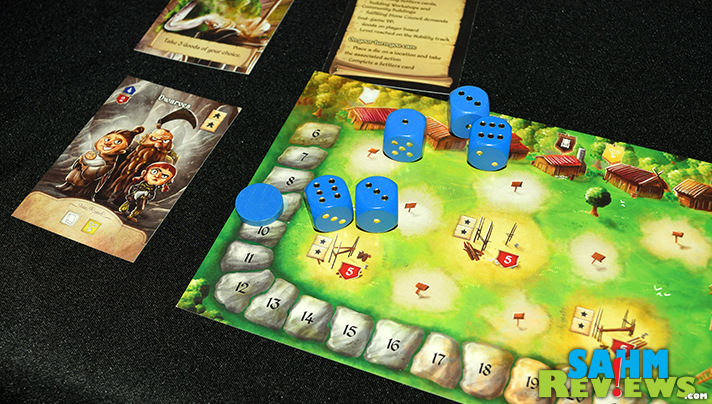 I’ve played a worker placement game or two in my day, including dice-based versions. But nothing like this. One of the most interesting aspects of this game involves the worker placement process. While the luck of the dice roll determine WHERE you can take actions, reputation determines how many actions you can take. As an example, you can roll a handful of sixes but if your reputation is only six, you can only play one! If your reputation is 12, you can play two. This particular game mechanism adjusts the “luck” of the roll and adds the need for some serious strategy. 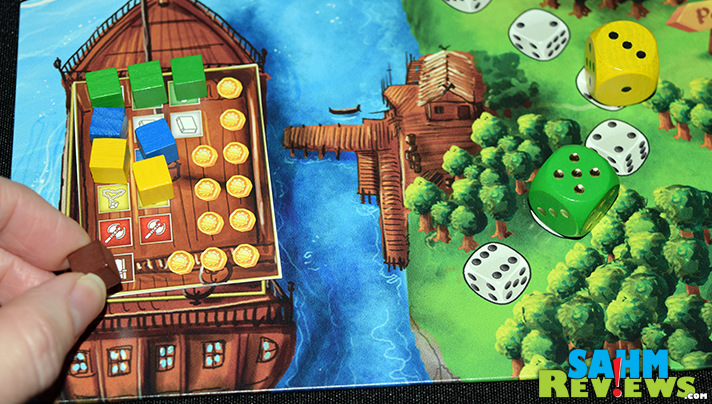 Purchasing and selling goods to ships, making improvements to the guild halls / community buildings and visiting the clerk or queen are all options that have to be factored in as well. As with most worker placement games, there’s a lot happening and many opportunities to get in the way of your opponents. Rise to Nobility is a game of multiple layers that will certainly put it in a realm of its own. 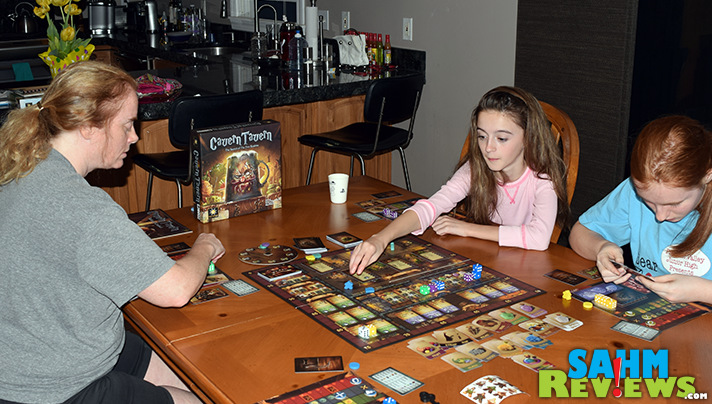 Learn more about what Final Frontier Games has hiding in a cavern and what is rising to the surface by checking in with them on Facebook and Twitter! Or stop by the Cavern Tavern Facebook page to see what they have brewing.

Have you played dice-based worker-placement games before?