Continuing to follow an idea we mentioned in our overview of Professor Treasure’s Secret Sky Castle, during our self-imposed COVID-19 quarantine we are looking for games that are quick to learn and support two players. With everyone in the house 24 hours a day, right now just isn’t a great time to try to play a multi-hour heavy Euro board game. We’ve found that we can only tolerate each other in small increments right now.

One example from our stash that fits the bill is the new Claim card game by Deep Water Games. We’ve long been fans of trick-taking games and keep a handful of them in our game night bag. Silver, No Thanks and Spoil Me Not are popular ones you’ll find us playing quite often. The common feature of almost all trick-taking games like these is you’ll play a card (or cards) trying to be lowest/highest/etc. and then take the cards that make up the trick into a personal pile. At the end of the round, the person with the most (or fewest) cards in their possession wins the game/round/points. 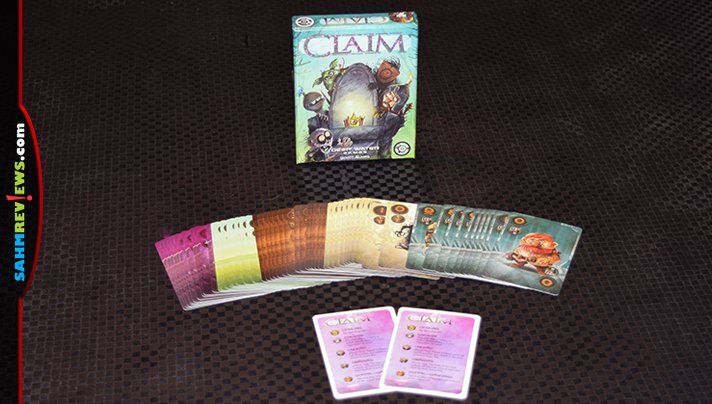 Things are taken a little bit further in Claim. Instead of reshuffling and playing another round, the cards you win during the trick-taking are used in a second phase of the game! We realize that may sound a little confusing, but stay with us – it’ll make sense in a moment.

Inside the Claim box a deck of 52 cards made up of five factions (think of these as suits) and two overview cards. Factions aren’t equal either, with three of them having 10 cards numbered 0-9, one with 14 cards containing four extra “0” cards and the last made up of only eight cards ranging from 2-9. After the entire deck is shuffled together, a hand of 13 cards is dealt out to both players and the rest are put into a face-down draw deck in the center of the play area. Both players may look at their hands and should keep them secret from their opponent. 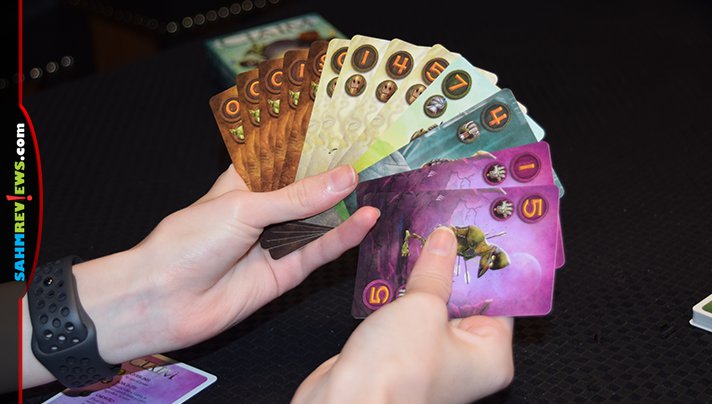 For the first phase of the game, players will participate in thirteen tricks. The top card of the draw deck is revealed at the beginning of each trick and is the card players will be vying for. The first player (Leader) plays any card from their hand, even if it doesn’t match the revealed card from the deck. The other player then must play a card from their hand that matches the faction the first player submitted, if able. The person that played the highest-valued card matching the Leader’s faction wins the card drawn from the deck. This newly-gained card is placed face-down in a pile in front of them. This is their Follower deck, and is the one that will be used later. The trick’s loser takes a card from the top of the draw deck and also puts it into their Follower deck. As you can see, the trick process is bidding over whether you want the card revealed or wish to take your chances at a randomly-drawn one. 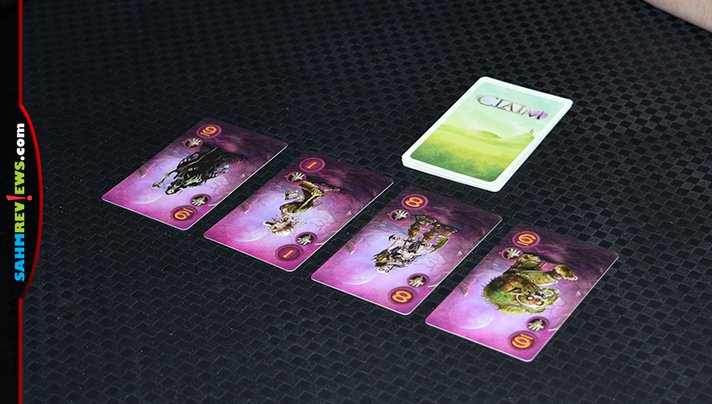 If either player has played a card featuring the Undead faction, the winner of the trick takes any Undead cards and places them face-up in front of them. These are part of their Score pile and will be tallied at the end of the game. Any Undead cards won from the draw deck still go to the Follower pile to be played again later.

After resolving thirteen tricks, each player will have exactly 13 new cards in their Follower decks. Phase two of Claim is more similar to other trick taking games you play with a regular deck of cards. Instead of competing over a prize card, you’re just vying for the two cards played during the trick. The Leader will play a card and the other person must follow suit (faction) if possible. The winner of this trick places both cards into their Score pile.

Throwing a wrench into your plans are the fact that each faction might have a special power. Goblins have no extra abilities. Knights always beat Goblins when played AFTER one. As mentioned previously, Undead cards are not discarded and instead are added to the trick winner’s Score pile. During the second phase of Claim, Dwarves are collected by the loser of the trick (with the winner still gaining any other factions). Doppelgängers are considered wild cards and automatically take on the faction of the first card played. However, they do not copy other factions’ special abilities. 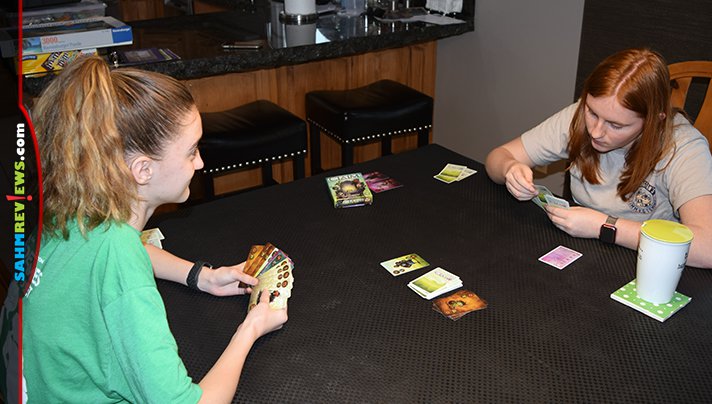 Once the next set of 13 tricks has been played, each person counts the number of cards of each faction they have in their Score pile. Whoever has the most cards of a particular faction wins that faction’s vote. Ties are broken by whomever has the highest-valued card of that faction The player who wins votes from at least three of the factions wins Claim!

Expect a full game of Claim to be played in under 30 minutes and while advertised for ages 10+, we feel it can easily be enjoyed by players as young as seven as long as someone else explains the rules to them. Claim is still in stock on Amazon or direct from Deep Water Games since most of our favorite local game stores are currently closed. Be sure to follow them on Facebook or Twitter to learn more about their other titles, including a brand new version of Welcome To…!

What is the most unique trick-taking game you’ve ever played?