When we talk about games here on SahmReviews, it’s because we’ve found one that we truly enjoy and want to recommend it to our readers. The vast majority of the time they are easily found on Amazon, big-box retailers or at your favorite local game store. The only exceptions are when we feature a vintage game we find at thrift – those you sometimes have to search out on eBay!

This site stays in business thanks to these games being readily available. Every time you click through to Amazon, we get paid a (very) small percentage when you finalize your purchase. We’re not retiring on these commissions by any means, but they’re enough to pay for the annual domain registration fees, site hosting and our thrift store purchases.

Every once in a while we want to boast about a new game, but it is so popular that it is sold out everywhere! Case in point was our article in March about Wingspan. We had it ready for publishing, but because of the hype surrounding it, it would sell out the minute it hit shelves. No need for us to give it a recommendation if you couldn’t pick up a copy, right? We eventually published the feature right around when the next printing was due to hit the shelves, which it did, and then also sold out.

The same goes for the game I’m about to tell you about. We first played Welcome to at Gen Con last year with over 100 players. Yes, you read that right – over 100 players. The publisher, Deep Water Games, was in attendance at a charity event where they were running a massive session of Welcome to Your New Home projected on a large screen with an entire banquet hall full of eager players. We had never played any game with so many people and it certainly was a unique experience. What makes the game even more interesting is that it can be played with that many or as few as one in solo mode! But…it too was sold out! We thought for sure they’d have plenty for Christmas, but that lot also sold out quickly. It has only been recently that inventory levels have gotten to the point where it is regularly in stock at Amazon and your local game stores! So let’s go over what it’s all about and then you can head over to buy one for yourself (and your 99 friends).

You’d think a game that supports so many people might be quite difficult to learn. You’d also be wrong. Here’s the entire game in one sentence – choose which of the three pairs of cards you want and write them down. Seriously, that’s it! You now know how to play Welcome to Your Perfect Home! 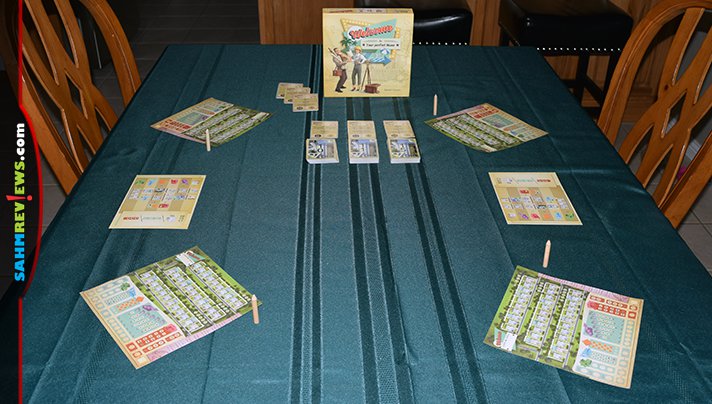 But seriously – Welcome to is about building the perfect neighborhood while scoring the most points along the way. Each player (up to 100!) takes one of the included neighborhood maps and gives their subdivision a creative name. A handy player aid is given to four lucky players. Three random City Plan cards are chosen and set Project side up. These cards establish additional scoring opportunities and are the objectives you’ll complete while working on your neighborhood. The Construction cards are shuffled and dealt into three equal stacks and set in an area where everyone can see them.

At the beginning of the game (and each turn), the top card of each Construction stack is flipped over, revealing an effect on the back. This effect, in combination with the house number on the top of the Construction stacks, are the pair of cards in which you’ll choose for this turn. On your score pad is the representation of your three-street neighborhood along with various other amenities and undesirable things that might pop up. Choose which pair of cards you’d like to resolve and write the house number on one of your three streets. House numbers must remain in numerical order (lowest to highest), starting from the left side of your paper. Additionally, the same house number may not appear on the same street (with only one exception)! 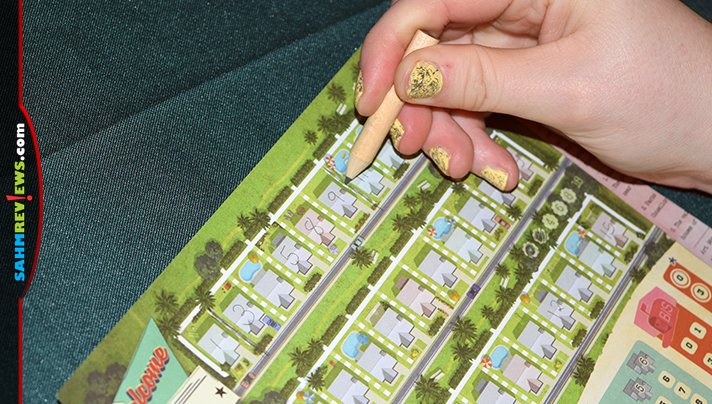 If a player cannot follow the rules for house number placement, they receive a “building permit refusal” and must fill in the top-most space on their score sheet. If you were able to successfully build your house, you may optionally take the effect on the paired card!

The surveyor effect allows you to build a fence between two houses on the same street, even if it isn’t next to the house you just built. This is done to create housing estates which are surrounded by a fence on either side of the group. These are necessary to fulfill many of the City Plans! 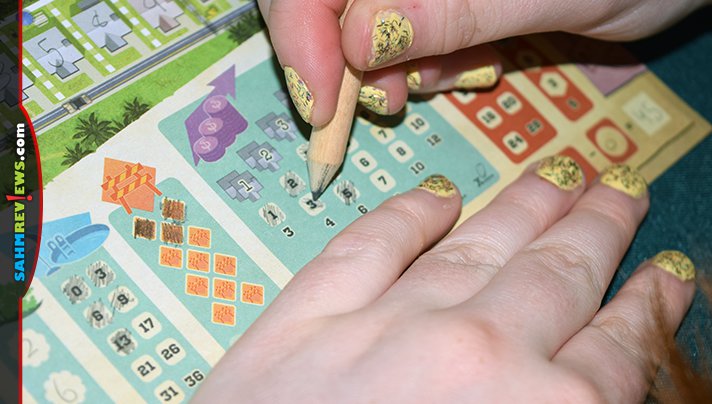 The real estate agent effect helps increase the value of your estates. Cross off the top-most number of the estate size you wish to appreciate. Obviously, these may work in combination with the City Plans as well. A landscaper action allows you to build a park in your neighborhood. Cross off one of the trees at the end of a street and must be done on the road that you just built upon.

Some of the housing plots have planned pools. When taking the pool effect, if you build a house with a planned pool, you may also cross off the top-most number in the pool column. The temp agency effect allows a player to subtract one or two numbers from the current house they are building in order to make it fit. If you use this effect, cross off one box from the temp agency column. At the end of the game the player who crossed off the most will earn bonus points. 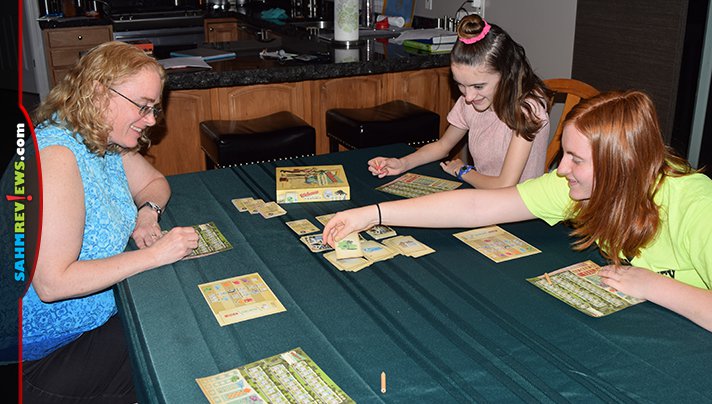 A special BIS effect allows a player to duplicate a house number on any street. It must be built directly next to the house with the same number, with “bis” written next to it to remind everyone. Again, cross off the top-most number in the BIS column on your score sheet. Use these sparingly, as they will subtract from your score at the end of the game! 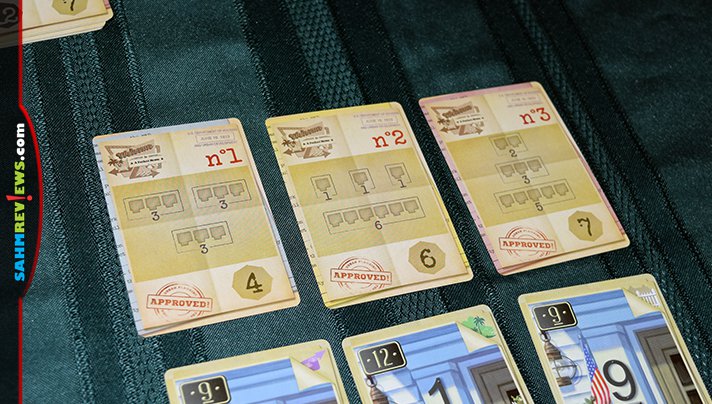 The length of the game is typically determined by the City Plans. You’ll be awarded more points by completing them quicker than your opponents and once someone has knocked out all three, the game ends. If the plans are particularly difficult, the game can also end by running out of cards or someone receiving their third building permit refusal. Add up the points for city plans, parks on each street, pools, temps and completed estates and subtract any points from your BIS column and the building permit refusal area and the person with the highest total wins Welcome to Your Perfect Home! 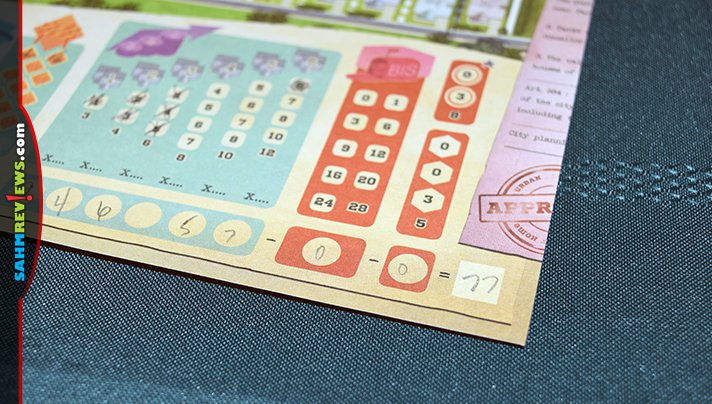 A number of variants (roundabouts, additional city plans) and expert rules assure that no two games of Welcome to… need be the same. Solo rules are also available if you don’t have any friends at all (I kid!). You’ll find copies in stock (finally) on Amazon, direct from Deep Water Games in their online store or at one of many friendly local game stores! While you’re at it, follow Deep Water on Facebook and Twitter to find out what they’ll be debuting this summer at all the major conventions!

What is your neighborhood’s best feature?

20 thoughts on “Welcome to Your Perfect Home Game Overview”