Some of you have become fans and friends of SahmReviews thanks to our coverage of the game industry. Non-game articles may feel a bit out of place to you, but those articles are actually the foundation of our site. While we focus mostly on board games these days, we still like to support the clients who got us to this point. We receive many many requests daily to cover a product, location, event or whatever from all kinds of companies. My colleagues do as well and the other day I saw one of them share about a cool destination they were contracted to visit. The pictures she shared focused on her view from the “room” 20′ in the air. Doesn’t sound like a big deal, but it wasn’t a typical hotel room. It was a tree house!

While I don’t have a tree house overnight in my near future, I can do the next best thing and play a game about treehouses! A few years ago we told you about Best Treehouse Ever from Green Couch Games and soon we’ll be sharing a follow-up to that game. But did you know there are more games about treehouses? I didn’t either, but if there are board games for pretty much everything! Magical Treehouse from Alderac Entertainment Group (AEG) is our most recent treehouse experience! 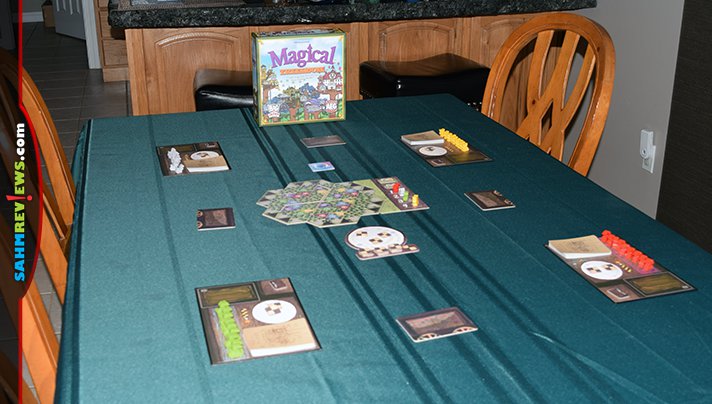 If you’re a wizard and need someplace to practice your craft, a treehouse seems like a natural place to do that. You’re in the environment where you collect the ingredients for your potions and you can continue to build without worrying about what your neighbors think. You begin by creating the Magic Forest in the center of the table by selecting the day or night side of the six tiles then piecing them together. Place the biscuit tray next to it and populate it with biscuits as noted for the number of players in the game. Select one red and one green objective and place on the designated spot on the turn order track. Grab a player board, Familiars tokens in your favorite color and one random brown objective tile. Place a Carriage board between in the spaces between all players. 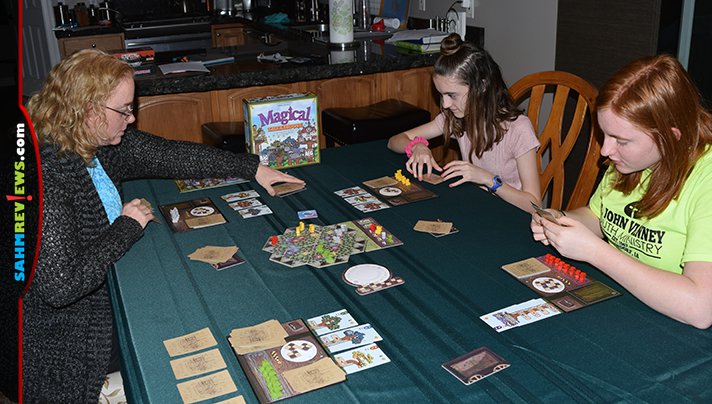 Magical Treehouse is played over four rounds, each consisting of three steps. First you’ll prep then you’ll plan and finally you will build. After the fourth round, points are calculated for trees built, potions prepared and objectives met. Up to four people can play and runs about 60-90 minutes. While Magical Treehouse isn’t a speed game, it has elements to the preparation stage that rewards those who finish their prep work first. 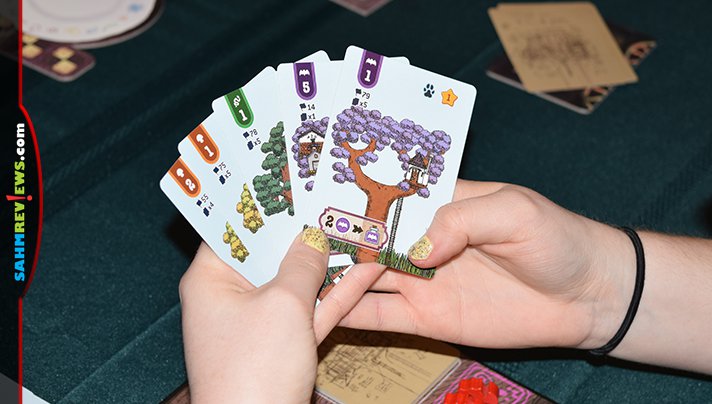 During the Preparation Step, you’ll shuffle Planning cards and distribute according to the instructions. Without looking at them, each player draws 8 cards from their deck to form a hand. Biscuits are moved from the stack to the tray so they are easily accessible by all players. Once you’ve done that, it’s time to start planning! 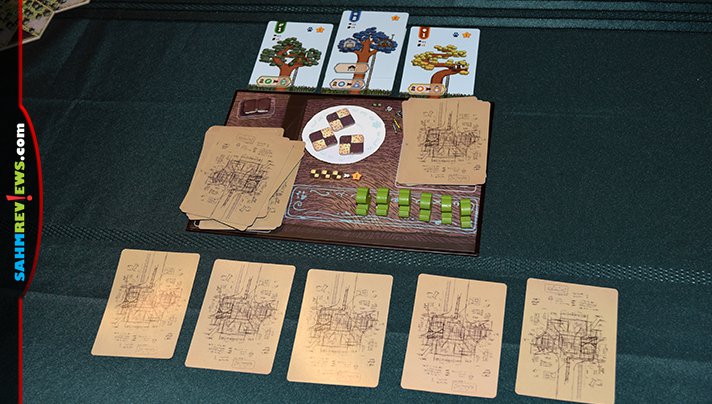 As I mentioned, Magical Treehouse has elements that reward players for completing their planning the fastest. The first players to complete this stage grab a biscuit from the tray that can be used throughout the game to reward Familiars or push another player to forward their cards. This process is the meat of the game so it’s a balancing act on deciding too quickly versus over-evaluating. The purpose of the Planning Step is to select five cards to place in your Planning Area that will be used during the Building Step. Once this stage begins, all players work simultaneously to select their cards and place in the Planning Area. If you have cards in your hand you can select one for your Planning Area, Trash Your Hand if you have a spell card or Cast a Spell. If you don’t have cards, you can take cards from the carriage next to you, draw 4 cards from your deck or drop out of the planning step and grab an available biscuit. This process continues until everyone has five Planning Cards and/or dropped out. 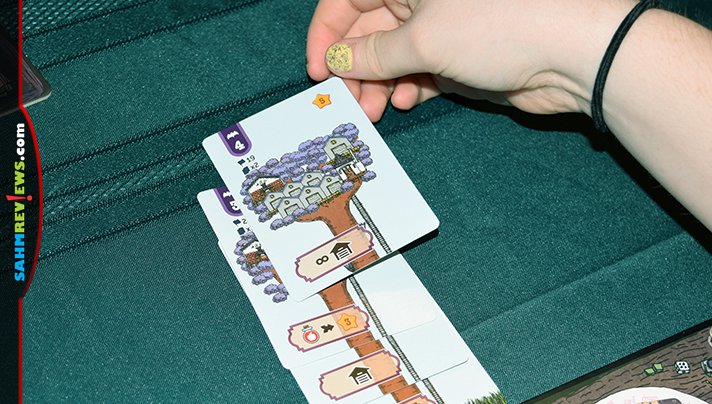 Now you’re ready to build those magical treehouses you’ve been dreaming about! Players follow the turn order track to take turns building. While everyone is building in their own tableau, there are limited ingredient spaces on the shared Magic Forest so turn order can make a difference! 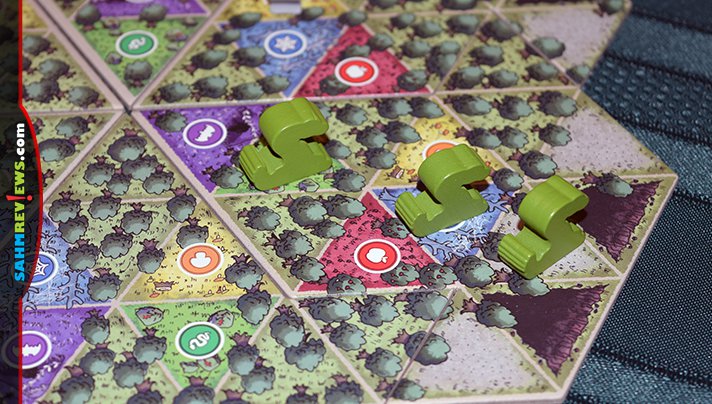 If you play a card with a paw print then you may place a Familiar in the forest. This is important because you need ingredients for potions which are one of the few ways to score points. The higher the treehouse, the better the bonuses. 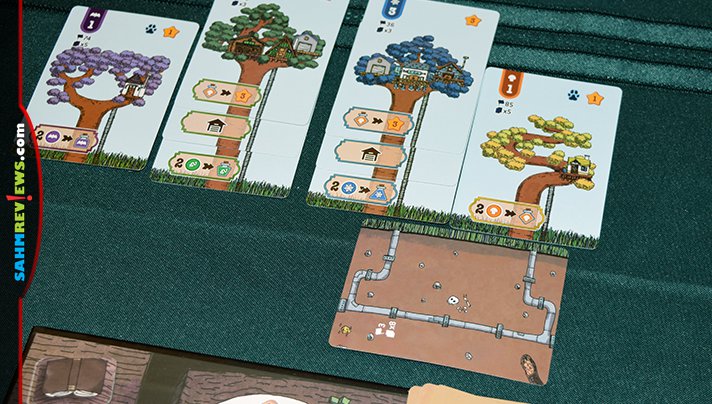 Use building pipe cards to connect trees so they can share resources. Unlike many resource games, you aren’t cashing in ingredients for potions but rather will calculate how many you have at the end of the game based on which ingredients your Familiars are collecting in the forest.

At the end of the fourth round, all players calculate points for each treehouse, for brewing potions, from objective cards, from biscuits and bonuses achieve as noted on Level 5 Treehouses. The player with the most points is considered the best wizard in the land! Alderac Entertainment Group offers a variety of games including Trainmaker, Cat Lady and Dice Heist to name a few. You can learn more about their upcoming titles by following them on Facebook or Twitter. If you’ll be at Gen Con, be sure to check out their Big Game Night event! If you’re ready to build your own magical treehouse, pick up a copy on Amazon or direct from Alderac Entertainment Group.

When was the last time you were in a treehouse?