As parents, we try to teach lessons to our kids about morality. Don’t lie, cheat or steal are but a few of the mantras any good parent will preach. Cheating is never allowed, but some of the board games we play encourage a few white lies. Others have you burying your family in plots for your own advantage – no matter what the deceased person’s wish was!

This week we’ve been playing a small-box game from Alderac Entertainment Group entitled Dice Heist. With Nicole’s love for any game that includes dice, it’s no wonder it’s hit the table more than any other game this month. Coupled with a quick setup and a game length of around 20 minutes, it became easy to grab when we were short of time but still wanted some family game time. 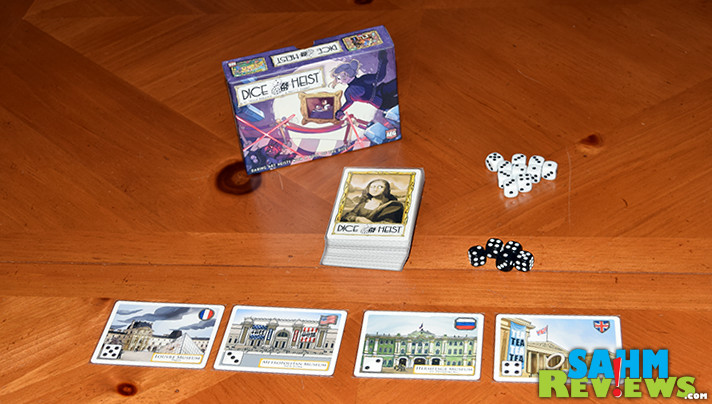 Dice Heist falls into two of our favorite game mechanic categories – push-your-luck and set collection. But the theme is what had us breaking the third mantra of “don’t lie, cheat or steal”. Dice Heist is all about robbing museums of their treasures. And not just one museum, up to four! And multiple time!

As I mentioned, setup is very quick. Give each player a black die (this represents your main thief), set out the four museum cards and shuffle the deck. It’s that simple – you’re ready to play!

On your turn you draw a card from the deck and receive an artifact, gem or painting. All have a flag symbol on the bottom which indicates which museum the piece belongs to. Set that card face-up underneath the corresponding museum. If the card you drew has a “+” symbol, draw another and also add it to the correct museum. Then you have a choice of two actions to take. 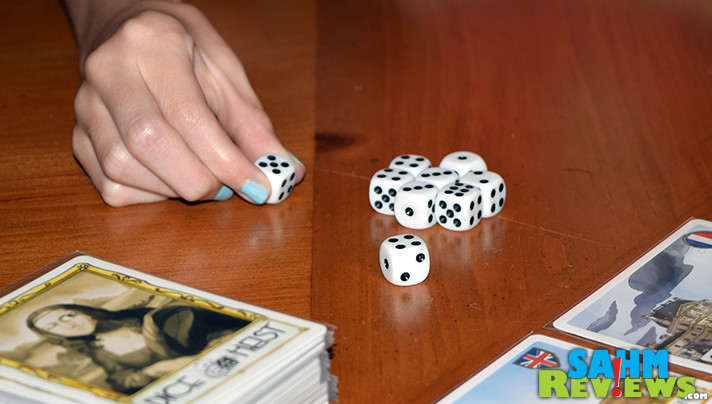 First, you can hire an accomplice in the form of a white die. This is your ‘team’ of thieves, which you will use in a later turn to stage a heist. Speaking of, a heist is your second choice of action during your turn. Instead of recruiting more accomplices, you may choose to put them to work and break into one of the museums! Specify which museum you are entering, roll your black die and as many of your white dice as you wish, and if you roll a number higher than what is on the card, you steal everything in that museum! You only have to have one die with the successful roll, so while more dice does increase your chances, you can still fail easily. 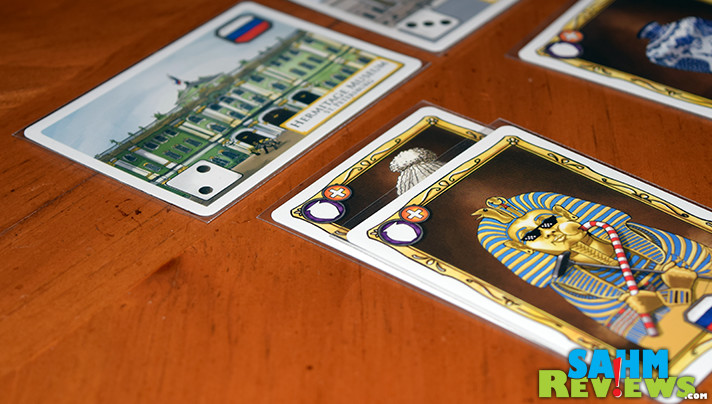 After the heist, your used white dice are returned to the pool and you receive you black dice back. When choosing to hire an accomplice, if there are none in the pool you will steal one from the opponent with the most white dice in their stable! Play continues until all treasures are won, even if there are no more cards in the deck. 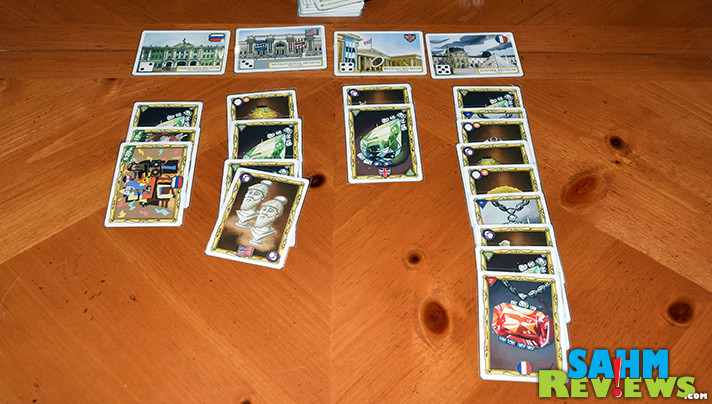 Tallying the final score is easy also. Artifacts are worth either one or two points, which is depicted by either one or two artifacts in the picture. Gems are sorted by color and you receive one point for the first of each color, two for the second, etc. Paintings are a little different. Sum up the total value of all the paintings you collected. The player with the highest total receives eight points, while the person with the lowest total loses four. Summed up, the person with the highest overall total wins Dice Heist! 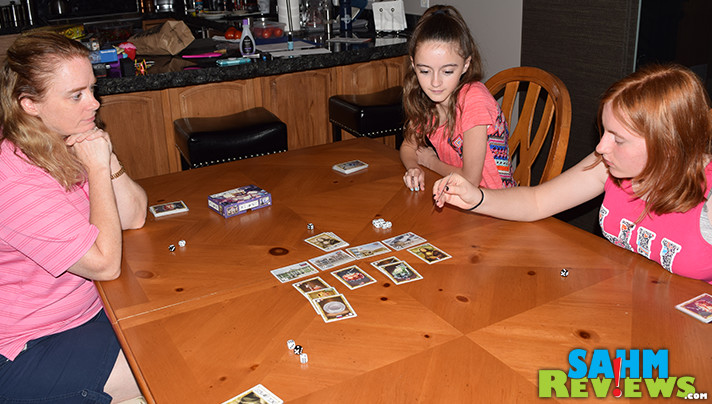 Much like the games in the E•G•G Series, Dice Heist fits into a very travel-friendly box. Forced to choose between this and Krakatoa, this one wins hands-down simply because it is so easy to teach. Your copy is awaiting you on Amazon for around $16 shipped.

We’ll be sleuthing by the Alderac Entertainment booth at Gen Con to hopefully get a preview of what’s coming out this fall. In the meantime, keep a watchful eye on their website as well as their social medial channels (Facebook, Twitter) to see if there’s something you need to grab. Just don’t get caught (by the spouse)!

What is your honest opinion of a game that has theft as a key theme?