When our family first started playing more advanced board games together, Barack Obama had just been elected into office for the first time. Like most families, we started out with kid classics like Chutes & Ladders, Candy Land and Sorry. It wasn’t long before the entire family was bored with these and looking for something a bit more challenging. What we found was there wasn’t much available at traditional discount stores other than Risk, Battleship and Clue. None of these really appealed to our girls, so we ended up looking elsewhere.

It was at a Barnes & Noble that we first noticed a couple rows of games we had never heard of before. Ticket to Ride, Settlers of Catan and more screamed out at us. All looked kid-friendly, but with mechanics that would challenge their young minds. I think our first actual purchase was Munchkin, followed shortly after that by Qwirkle. That’s when the long trip down the bunny hole began!

We’re always on the hunt for the latest game releases and attend all of the major game conventions in the United States. We’ve been fortunate to not get caught up in a game series too often, waiting on the newest issue. Although I have to say we’re fond of the Legendary Deck Building series and are considering adding to our collection.

However, there’s one company we started covering a couple years ago that we’ve grown very fond of. Not only because the family behind the organization is genuine, but because of their products and commitment to using games as educational tools. Academy Games has put forth a number of historically-accurate light war games, many offering an optional teacher’s guide so they may be used in the classroom. That doesn’t mean the games are dry and boring – the opposite is the case. Teaching facts through the use of game play is something we as a family believe in and preach almost daily. It’s wonderful to find companies that feel the same way. 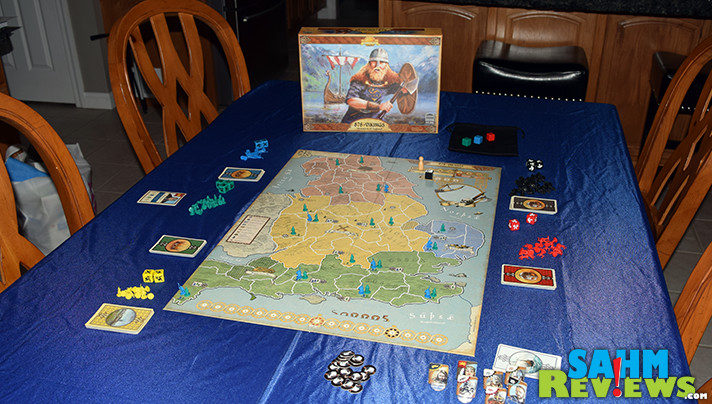 Over the past two years we’ve been telling you about Academy Games’ Birth of America series. These skirmish titles have highlighted actual events from 1812, 1775 and 1754, and we were sad to know that the series was coming to an end this year. The good news is that while the American series has been completed, the games will continue in a brand new line, the Birth of Europe. The very first title, 878 Vikings – Invasion of England, is making its retail debut this month at Gen Con in Indianapolis, IN! 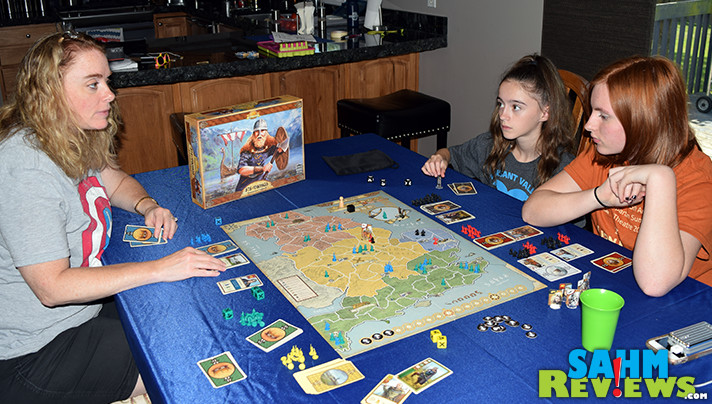 And guess what?! We proudly received an early copy flown in from the overseas manufacturer so we could take it through its paces. If you’re going to be at Gen Con, make sure to stop by Academy Games’ booth to get a personal demonstration. And if you’re among the Gen Can’t crowd, this is the game you’re missing. 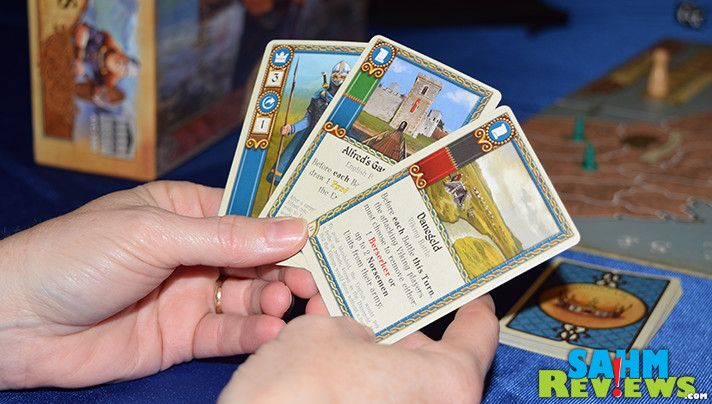 One thing we noticed (and loved) about the Birth of America series is that each subsequent title was similar in game play to the previous, with another new feature added in (of course, new maps too). 1775 brought regional area control that 1812 didn’t have. 1754 added ports that you could sail from. Would 878 Vikings expand on these and add something new? Yessir. 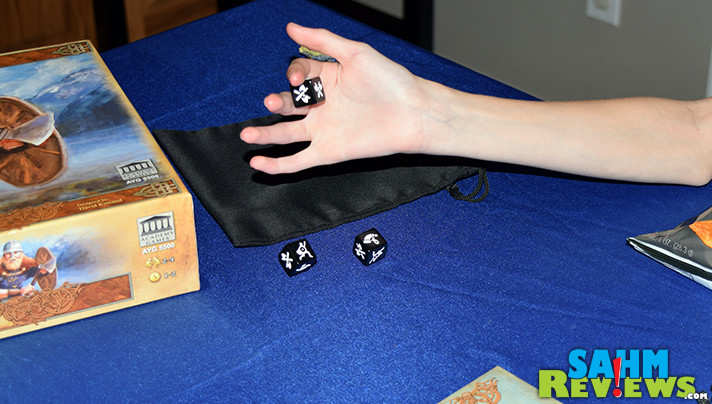 878 Vikings turns up the complexity, while still keeping the game reachable for children as young as 10 or 11. Like the previous series, it is designed for four players and utilizes many of the same mechanics from the prior series. You still work from a three-card hand and play one movement card per turn. Event cards still give you special one-time abilities. The goal is still to capture and hold fortifying locations. The game can still end if both members of a team play their treaty cards.

Instead of each side having starting locations to defend, in 878 Vikings, only the English have land positions. They are tasked with defending their shires from the invading Vikings. Newly added are army Leaders that not only command a large group of troops, they also have special movement rules not seen in the Birth of America series. As you might recall, sides get reinforcements each round. In order to deploy these soldiers, you need an area to place them. Vikings don’t own the land, so they get these new Leader cards. A new one is drawn each round and armies added to them as depicted. 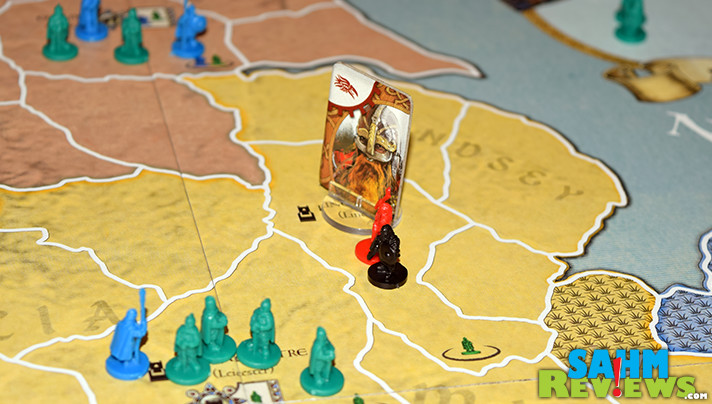 Leaders get their own movement phase and can add or drop off soldiers as they see fit (unlike regular armies). Leaders also battle immediately when moving into a Shire occupied by enemy units. If victorious, that leader may continue moving if they have moves remaining. Once a Leader has no friendly units remaining on his card and in the Shire he’s located in, he is considered defeated and removed from the game. 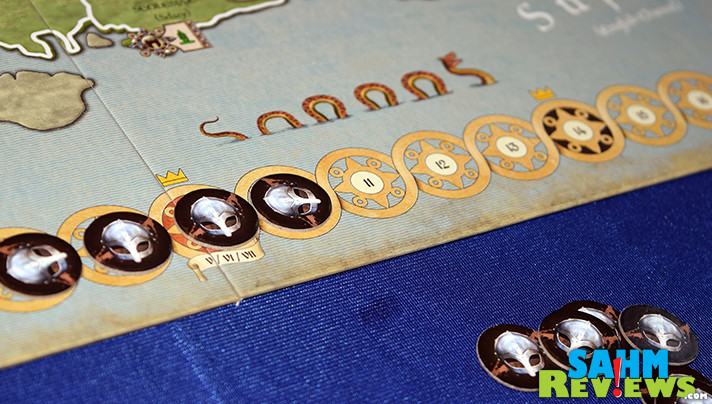 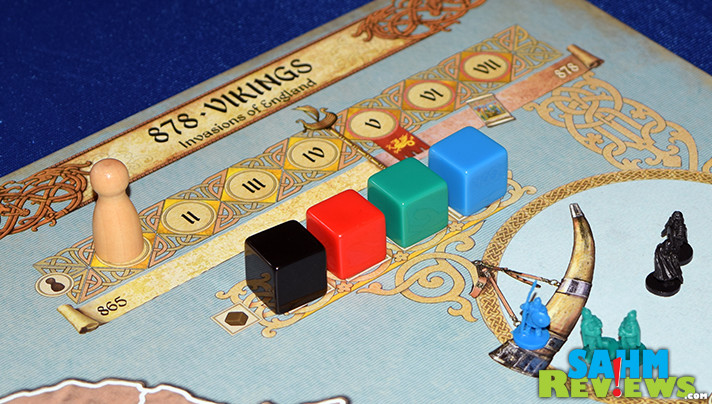 Also unique to 878 Vikings is the inclusion of different scenarios to reenact. These have special setup criteria with custom rules which apply just to that campaign. The base copy of 878 Vikings includes two different scenarios to give you a taste of what they’re like and I wouldn’t be surprised to start seeing additional (official and fan-made) campaigns popping up!

If you’re a fan of the Birth of America series like we are, picking up a copy of 878 Vikings is a no-brainer. If you haven’t indulged in the original series yet, it’s not too late to start with 1812 and work your way up. That doesn’t mean you can’t jump right in on 878 Vikings though! If you’re at Gen Con this week, do yourself a favor and go see it for yourself at booth #2921. If not, get your copy of 878 Vikings now on Amazon.

We hear rumors of another brand new line coming out from Academy Games this fall! Make sure you’re following them on Twitter and Facebook to find out which licensed property they have landed!

Which will be your favorite? Birth of America or the new Birth of Europe?