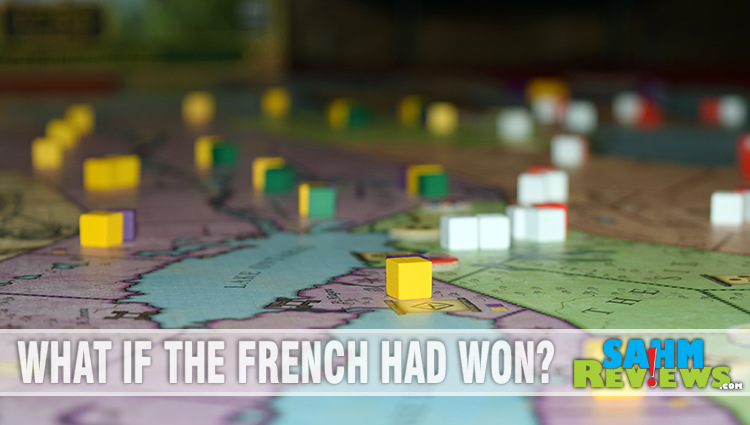 I have some conflicting feelings about today’s board game feature. Not because there is something wrong with the game, but because I’m grieving due to this being the last in the series. It’s been nearly 18 months since we presented our first experiences with a game by Academy Games, 1812: The Invasion of Canada. That was followed up last fall by what was the second in their Birth of America series, 1775: Rebellion. We recommended both titles highly thanks to the availability of teacher guides with full lesson plans to help incorporate the game into a typical middle school history lesson. 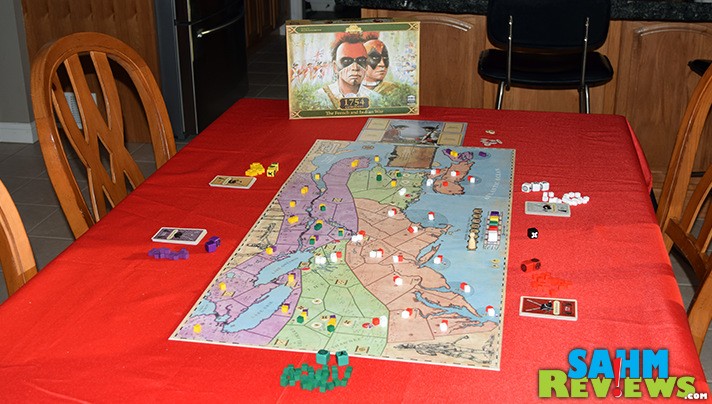 When we found out there was a new title in production in the Birth of America series, we were anxious to find out what era it would cover and if any new mechanics would be added to the game play. 1754: Conquest – The French and Indian War was finally released last month, but along with it came the news it would be the final title in the series. So that’s why the mixed feelings. We love that we’re going to learn more about a new timeline in America’s history, but sad to know it’s the last. What will replace it? More on that in a minute. 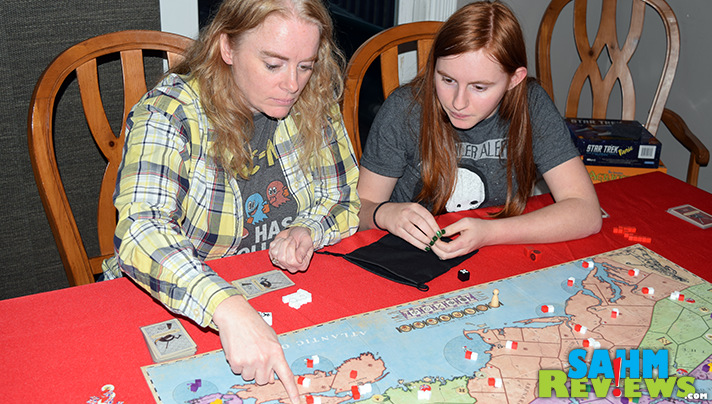 We’re happy to report that 1754: Conquest does not disappoint. In fact I would go as far to say that if you don’t have any of the series in your collection and can only afford one, this is the one to get. That’s not to say you shouldn’t also own the others! 1754: Conquest is just the best of the bunch.

This final version draws upon the same mechanics as seen in the previous two titles. Played in teams, each side controls aligned factions whose positions are predetermined and indicated by matching color squares on the over-sized game board. Over the course of up to eight rounds, your team is trying to capture and control more victory areas than your opponent and maintain that advantage until the game ends after eight rounds or when a truce is established. 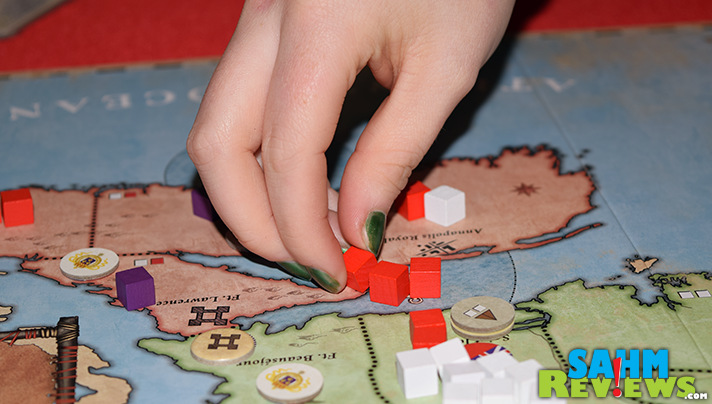 Because 1754: Conquest takes place decades before the signing of the Declaration of Independence, there are no American factions to control. British Regulars, British Colonials, French Canadiens and French Regulars are represented, as well as the (sometimes) neutral Natives. 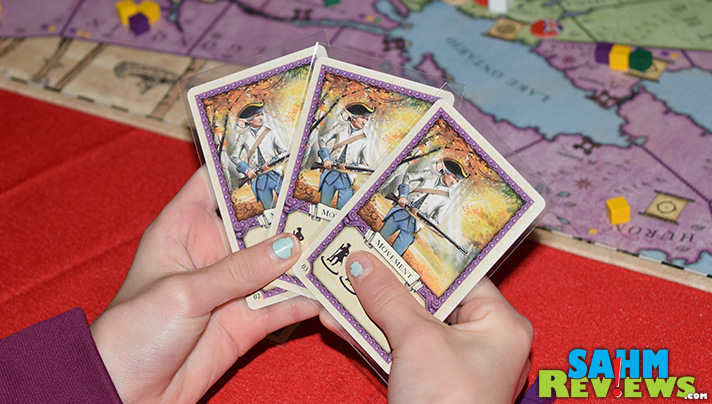 Actual game play is nearly identical to that of 1812: The Invasion of Canada where turns are decided by random draw of blank dice from a bag. On a faction’s turn, they elect to play as many event cards as they wish, along with one movement card. This dictates how many armies may move and how far they can travel in one turn. Entering a region with enemy units causes an immediate conflict with both sides rolling their custom dice until one side either flees or is completely eliminated. If the region was designated a Victory Point area, the winner of the battle turns the victory marker to the side showing their country’s flag. 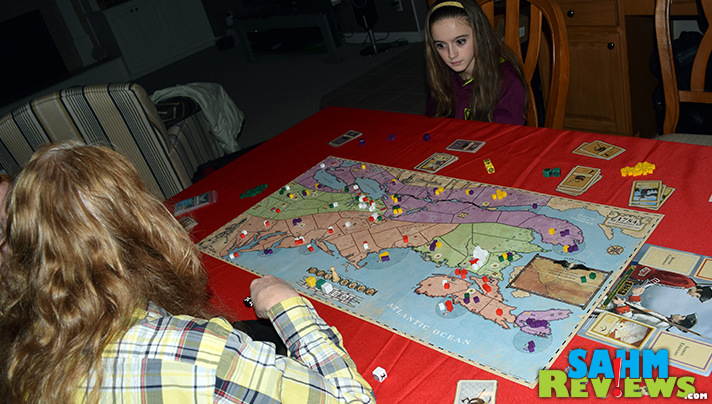 1754: Conquest really is that simple to learn and play. Your success will come from your tactics mixed with a great deal of lucky dice rolling. So what makes 1754: Conquest better than its predecessors? Two additions certainly take the series towards a more tactical game that counts less on just the luck of the roll. 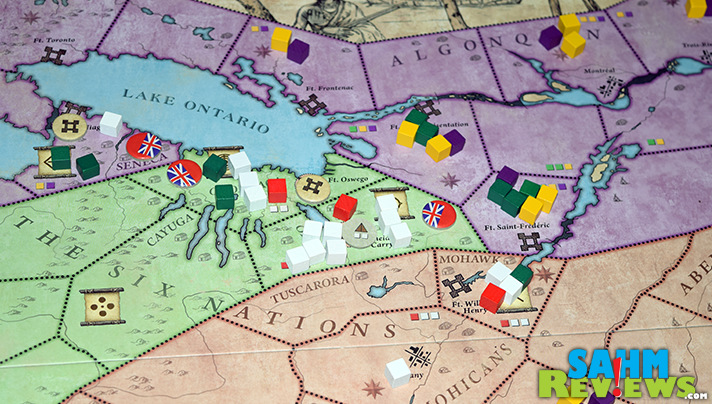 First is the addition of forts. Placed throughout the home and neutral areas, forts add an element of defense not seen in the other titles. When a battle takes place in a fort’s region, the defense obtains a custom “Fort Die” which they roll after being attacked. A successful roll negates one of the attacker’s strikes, potentially saving your man. But if you control a fort in a neutral area, you probably don’t want your opponent to take it over and use it against your troops. So if you have your last man flee the battle, he can light the fort on fire, burning it to the ground. This removes the fort from the game…that is until you draw a card that allows you to build a new one. 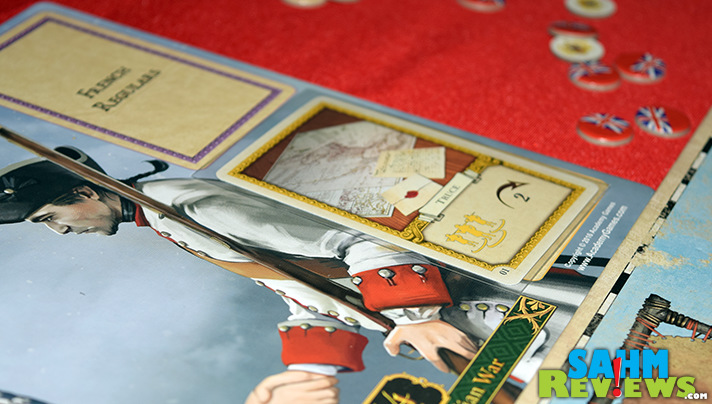 Secondly, 1754: Conquest adds harbors! No, this isn’t turning into a naval battle. One of the slight drawbacks of the previous two games was the inability to quickly move across the board. We realize this is not a deficit of the games themselves, it was a limitation of the area of the map in which the battles took place. This part of the French and Indian War was primarily fought on our eastern coastlines, so it was only natural to include this feature. These harbors allow you to quickly move your troops via imaginary ships to other harbors, allowing for stronger defenses or sneak attacks. This feature alone solidified our opinion of which version was best in the series.

And just like the other two games, 1754: Conquest includes a few pages covering a historical overview of the war. From the Pre-War, to each sides ‘plans’ and various Sieges, to the final negotiations, I found myself engrossed in the history and wishing I had paid more attention during my middle school classes.

You can find 1754: Conquest on Amazon or buy it direct from Academy Games on their website. So what is next from Academy as a follow-up to the Birth of America series? Since we’re following them on Twitter and Facebook, we recently found out they have a Kickstarter campaign running for their newest series, Birth of Europe! And the very first title has Vikings! 878 Vikings: Invasions of England continues with nearly the same proven game mechanics and even includes plastic miniatures instead of wooden cubes! So much value for only $65 – you’ll have money left over to spring for an add-on or two!

Who would you side with? The French or the British?