During our never-ending search for new and old board games to try out we sometimes happen across a happy coincidence. One time we found both English and Spanish versions of the same game, this time we discovered an original and a follow-up game at two different stores on the same day! Qwirkle by MindWare was a game we had heard of before but never played. It’s no surprise we knew of the game, it is MindWare’s best selling issue of all time and we regularly see it at Walmart, Target and other big retailers. But its lesser-known follow-up, Qwirkle Cubes, was one we were not familiar with so of course we had to buy them both. 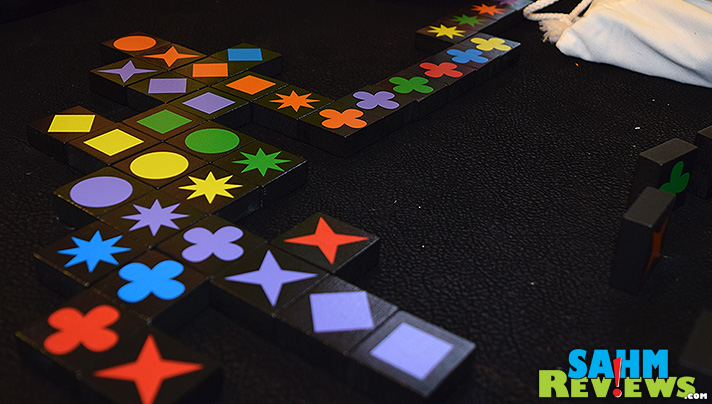 The object of Qwirkle is very easy to pick up – you’re scoring points by lining up rows and columns of matching colors or matching shapes. There are six different colors and six different shapes. Each may appear in a row only once, and thus there can be no more than six tiles in a row. Your receive points for the length of the row(s) you add to during your turn. Add one tile to a pre-existing row of 4 and receive five points. If it also adjoins a column of 2, receive an additional three points (2 for the column and one for the tile you just played.) It has a similar feel to Scrabble, but since we’re dealing with colors and shapes instead of words, can be more easily played with opponents of different ages. 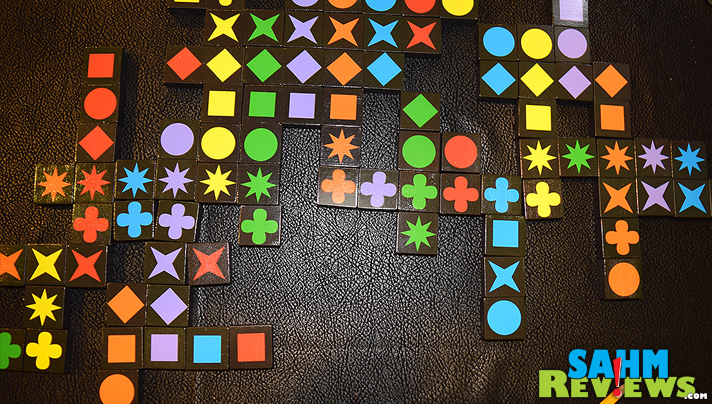 If you complete a row of six on your turn, you receive an additional 6 bonus points for making a “Qwirkle”! Play continues until all tiles are successfully played and the person with the highest total wins. Sounds simple, right? It is simple, until you start to think about how to play and where, trying to prevent your opponent from completing a row. There are three of every tile combination and as the board begins to fill, counting how many left of a particular tile becomes paramount. Do I have you confused? See if this helps:

This is a game that starts very fast, but quickly slows down as you realize you need to play smarter to block your opponents. 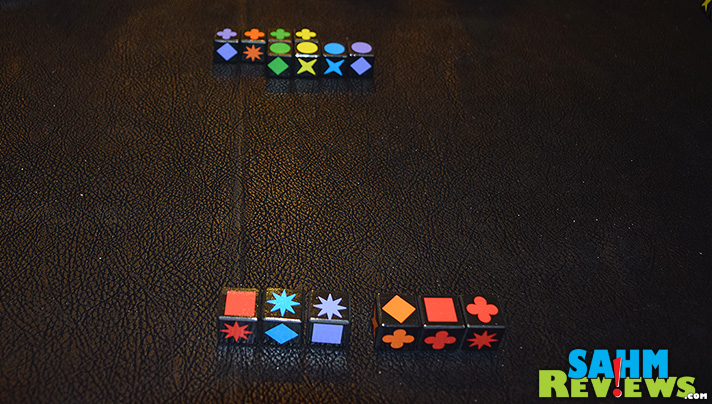 Then there’s Quirkle Cubes. Nearly the same game, but thanks to the form factor of dice, takes up much less room. And here’s the twist – your opponents can see what you have! They’ll know what you are working on and if they have similar colored dice, they will try to beat you to the punch. 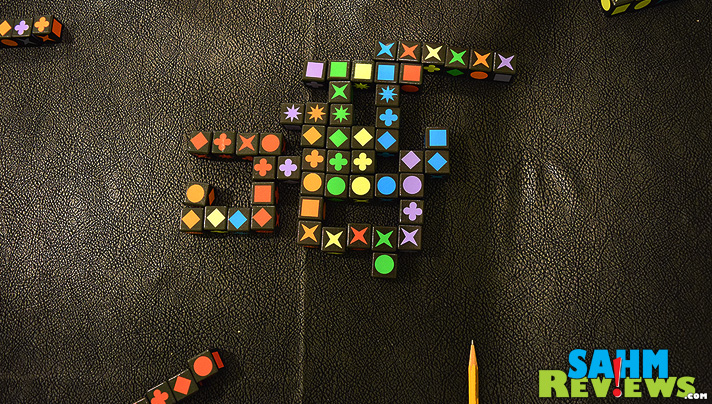 Scoring is exactly the same as Qwirkle, as is how you play your dice. Except…before your turn you are allowed to re-roll as many dice as you like to try to turn them into the shape you need. Each die has the same color on all sides, just different shapes. No more counting to see how many are left in the bag – you can roll to get what you need and not have to worry about the luck of the draw. 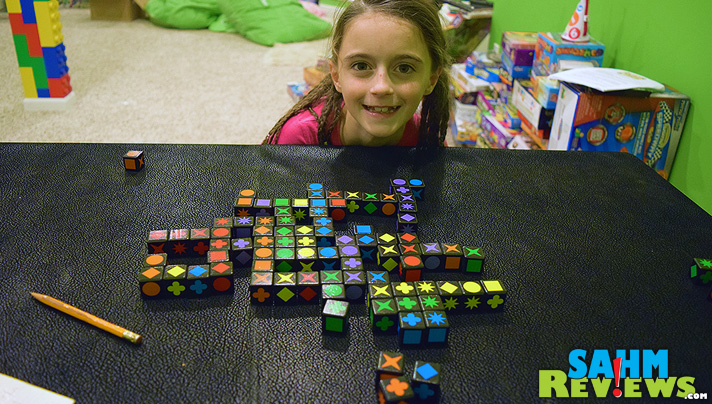 Both Qwirkle and Qwirkle Cubes are extremely fun games and can be played by almost all ages. They are recommended for ages 6 and up, takes anywhere from 30-60 minutes to play and accommodates 2-4 players. Both games include well-made wooden tiles or dice as well as a drawstring bag to store and draw from.

Qwirkle has received numerous awards, including the Parents’ Choice Gold Award and was a National Competition Winner for Mensa. Qwirkle Cubes also stood on its own and picked up Dr. Toy’s “Best Vacation Product” Winner award. You can find Qwirkle online for just over $20, while Qwirkle Cubes will run you a dollar or two more. They also have a version called Qwirkle Trio which we haven’t been lucky enough to find yet. Let the folks at MindWare know you want to see it on SahmReviews.com!