Exhibited by the number we find at thrift stores, the 80’s and the 90’s saw an insurgence of creative abstract games. It’s a good thing we’re huge fans of the genre! We’re always finding titles that were only issued one time, even though they are still extremely fun by today’s standards. Callisto was a good example of one we’d love to see reissued with higher-quality components and updated colors.

And still today there are a number of companies releasing successful abstract games even though they appeal to a smaller segment of the marketplace. Recently we talked about Squadro by Gigamic, Reef by Next Move Games and The Climbers by Capstone Games. All of these are well-designed, offer different mechanics and appeal to all ages. Today we’re playing Triple Cross by Winning Moves Games, another example of an abstract game employing a new style that we’ve never seen before. 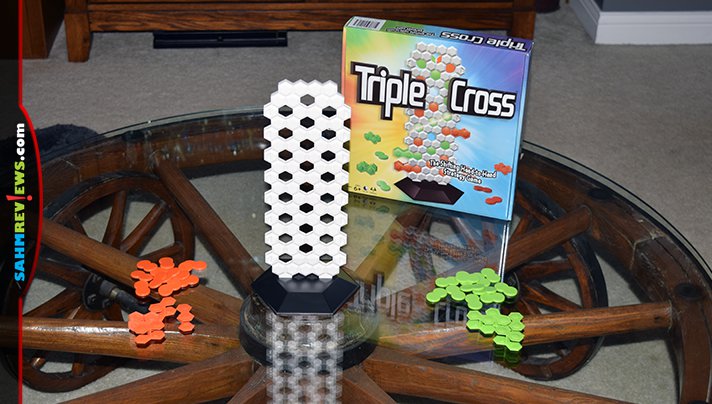 Much like last year’s abstract hit, Drop It, Triple Cross utilized a vertical plastic “board” in which you’ll insert your pieces. Designed for two players, each person is vying to create the greatest number of three-in-a-rows. Setting up a game of Triple Cross couldn’t be easier – just place the included grid onto the base and set it in the middle of the play area. Each player receives 12 discs of their color and 4 matching blockers. That’s it – you’re ready to play! 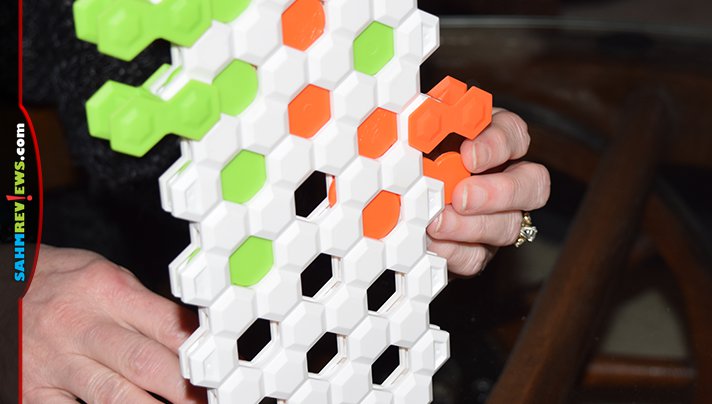 Players take turns placing one of their discs into the grid by sliding it into either side. The discs actually resemble the number “8” and are made up of two intersecting circles. The grid is hexagonal, so when you slide in your disc, it will move according to the grid pattern. 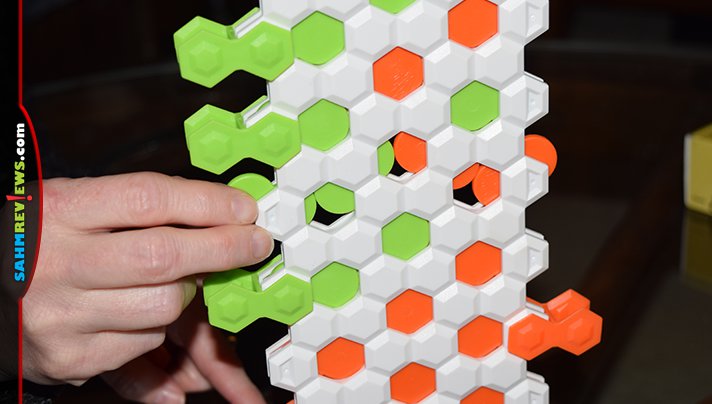 When inserting, if another disc is already present, it will be pushed along the level, upwards towards the middle space and then again downwards towards the last one. If a disc exits the opposite side, it is returned to the owner for use on a subsequent turn.

Both sides take turns playing discs into the grid, trying to line up their color in rows of three or more. These Triple Crosses are only vertical or diagonal, since the grid is made of hexagons. Additionally, once per turn, a player may elect to place one of their blocker pieces on the edge of the grid. This locks up the entire row and makes it so additional pieces may not be placed there. It’s a good strategy to do this when you want to prevent your Triple Cross from being disturbed before the end of the game. But remember, each player only has four each, and once played, they may not be removed or moved on the grid. 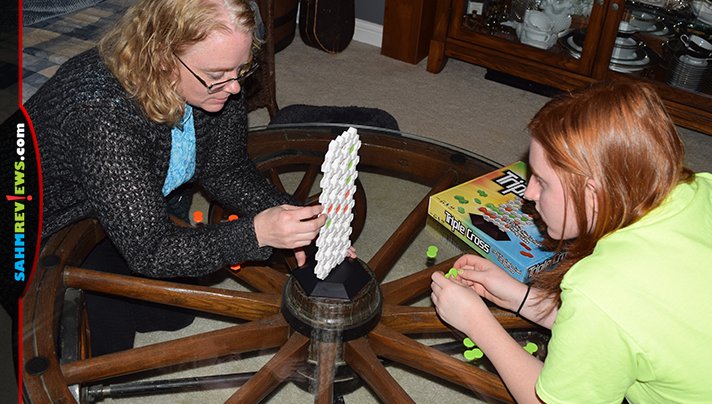 A game of Triple Cross ends when there are no discs left to play by either player. One point is received for each three-in-a-row on the board at the end of the game and spaces may be used in more than one series. For instance, if you line up four in a row, you’ll receive two points – one for spaces 1-3 and one for spaces 2-4! In the event of a tie, play another round! 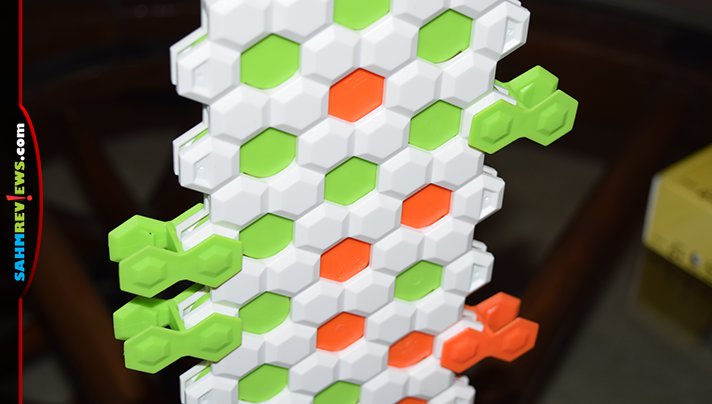 Correctly advertised for ages 6+, you can expect a full game of Triple Cross to be completed in just 15-20 minutes. You’ll find copies regularly available on Amazon, direct from Winning Moves Games or possibly at your favorite local big box retailer. Stay up to date on what else Winning Moves has planned to release this year by following them on Facebook and Twitter! Thanks to Winning Moves for providing a copy of Triple Cross prize package for a giveaway. The package includes a copy of the game plus you’ll be able to select an additional $100 in other products from their website! That’s a package valued at $121 and all you have to do is enter using the form below!