Home / Recreation / Games / We Found (a) Green Couch at Geekway 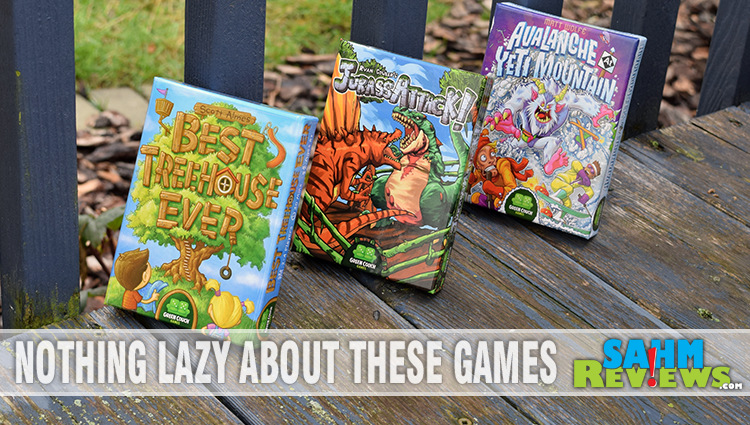 We Found (a) Green Couch at Geekway

I’ve mentioned many times that we attended Geekway to the West this past May. It was a wonderful weekend of just playing games with 1,600 of our closest friends. There were two large rooms where people sat at a table, put up a “players wanted” sign and began gaming with whomever decided to join. A third large room was dedicated to a “Play and Win” section that housed a couple hundred donated games which you could win just by playing one session.

What sets Geekway apart from some of the large conventions like Origins or Gen Con is it is focused on play first and vendors/sales second. That’s not to say games don’t change hands. Miniature Market brings tables full of scratch-and-dent and clearance games, and on the last day there is a flea market where you can sign up to sell some of your own extra titles. But it really wouldn’t be a convention without some actual game publishers in attendance!

One room was set aside to house about ten game publishers. Many we have known for a long time and have highlighted some of their titles over the years. Abstract favorite Gigamic was present, along with two of our favorite hobby-game publishers, Tasty Minstrel Games & Grey Fox Games. Set up next to Grey Fox was a company we were not familiar with, although one of our friends gushed about their games – Green Couch Games.

The first thing we noticed is all of their games comes in the same-sized box. It instantly reminded us of another company, Grandpa Beck’s Games, whose card games also are always made in the same size. Upon looking closer at some of the titles they had on display, we realized Green Couch Games was more than just a card game publisher. While they all do retail in like-size boxes, each offer is a different type of game on its own.

This 2-player card game includes two decks of tarot-sized cards containing various dinosaurs and their eggs. On each card is printed various stats and effects unique to that reptile, including its ferocity, type, score value and how many times it appears in your deck. 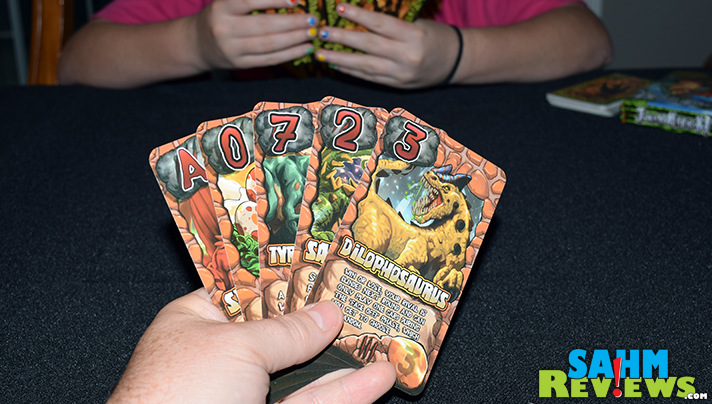 Players draw five cards from their deck to create their working hand. JurassAttack is played over a series of rounds until one person is out of cards. You might even consider this a prehistoric version of the game “War”! Select one or more cards from your hand and lay them face down in front of you. You may choose to just play one dinosaur or an entire ‘pack’ by selecting identical cards from your hand. 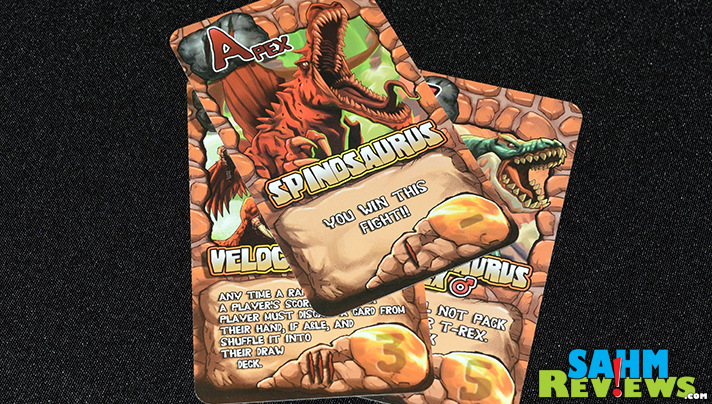 Once revealed, it is time for them to fight. Any effects on the cards are resolved and then the Ferocity of each team is calculated, including any earned bonuses. Highest total wins the round! Ties result in a knockout for both sides! 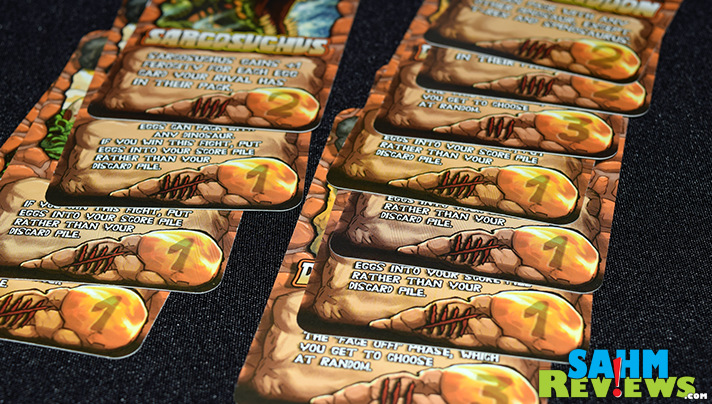 The winning player takes their opponent’s cards and adds them face up to their scoring pile, while discarding any cards they played that round. Except eggs. They are always added to the score pile. 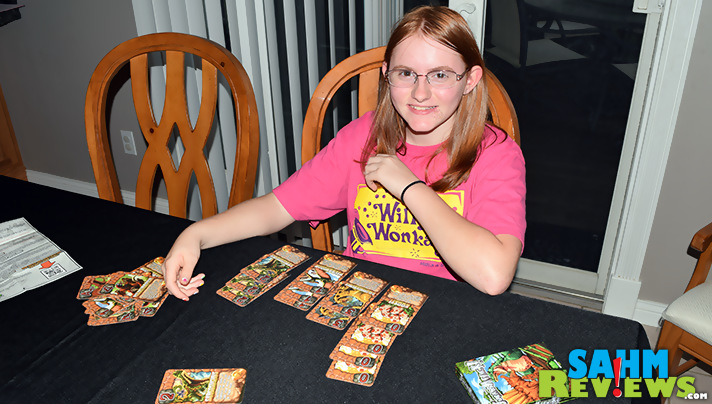 For the next round, the losing player gets to draw their hand back up to five while the winner of the previous round gets nothing (unless they are out of cards – then they get to draw ONE card). Once either player is completely out of cards in both their hand and deck, the game immediately ends and the one with the highest point total in their score pile wins! 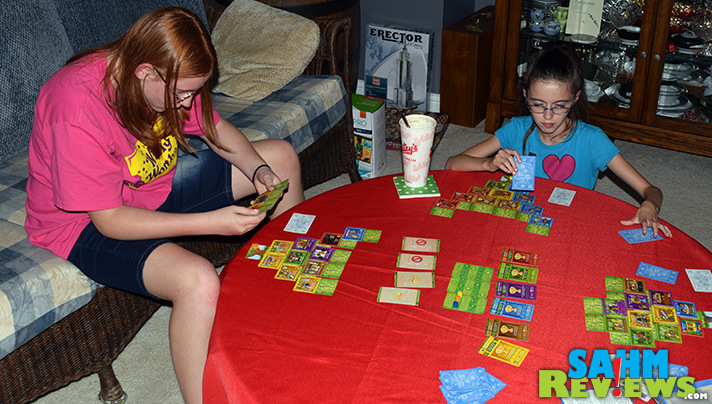 Supporting up to four players, each person starts with a starting tree card in front of them. A balance marker is also placed in the center circle. There is also a scoretrack created by combining three of the cards, a nice feature in the interest of keeping the box small and the costs down. 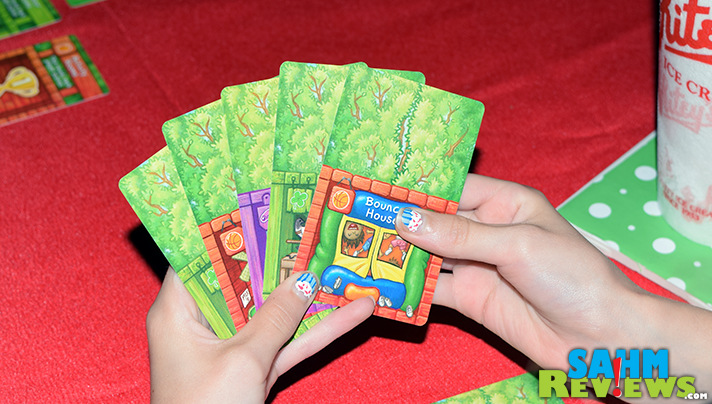 Each player is dealt six room cards from the Treehouse Deck and selects one from their hand to place face-down in front of them. At the same time everyone reveals their choice and adds the room to their treehouse. Treehouses must be built one room at a time and must be supported by two branches from two different cards (except edge rooms which only require one). As your tree gets taller, it can therefore support more rooms (an inverse pyramid). There is a physical limit of six levels, so do not try to build higher than that. 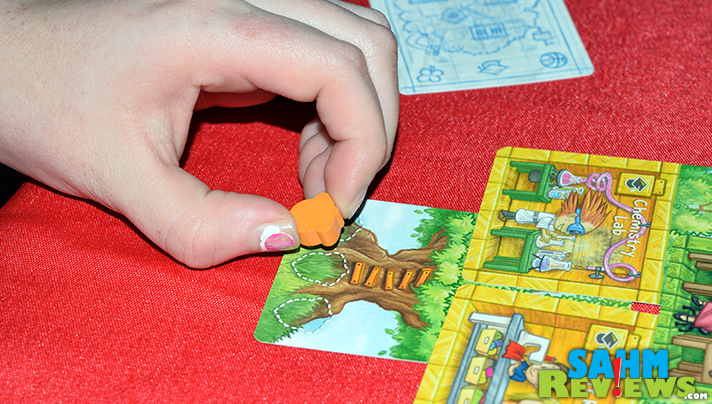 Each room is a different color. The first time you play one of the colors, you may place it in any valid position. But once you try to play a second occurrence of a color, it must touch another room of the same color. You also must pay attention to the balance marker previously mentioned. Every time you add a room, the tree will lean (or sway) in the direction of the newly added room. If a card is added on the left side of the tree, move the balance marker one space to the left. Any time the balance marker is not in the middle, you cannot build on that side of the tree. On the few occasions where a room is built in the center of the tree, the marker is not moved.

If you play a card that cannot be legally placed on your tree, it is discarded. Once you have placed your room, the rest of your hand is passed clockwise and players choose another card, repeating the steps above. This continues until there are only two cards in your hand to choose from. Pick one and discard the last one. This signifies the end of the round. 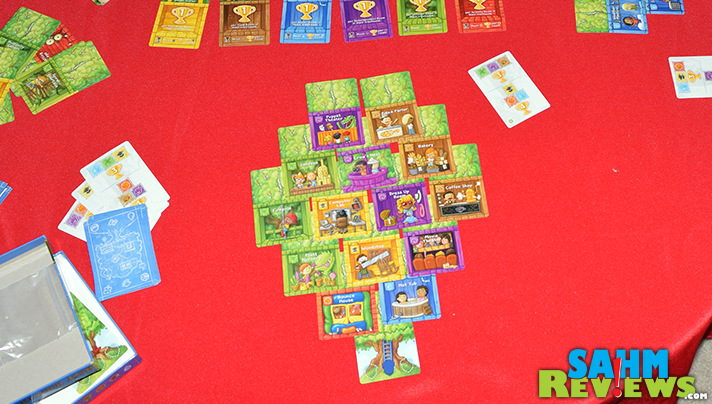 After each round is completed, a Game Changer card is chosen by each player which alter what will be scored. Two of the cards double the value of certain color rooms, while the other two make other colors worthless. It is completely up to the player which he wants to apply his changer card to, and since only one can be played on a room type, player order makes a big difference. Scoring occurs after each round, and a final bonus for the most of each color is awarded at the end of the game. Highest total wins!

I think Avalanche at Yeti Mountain is the one that intrigued us the most. Not only are the cards used by the player, they are also placed on the table to create the “board” for the game! You and up to four of your friends are playing as skiers who are trying to get to the bottom of the mountain, avoiding the yeti and outracing the avalanche roaring behind you. 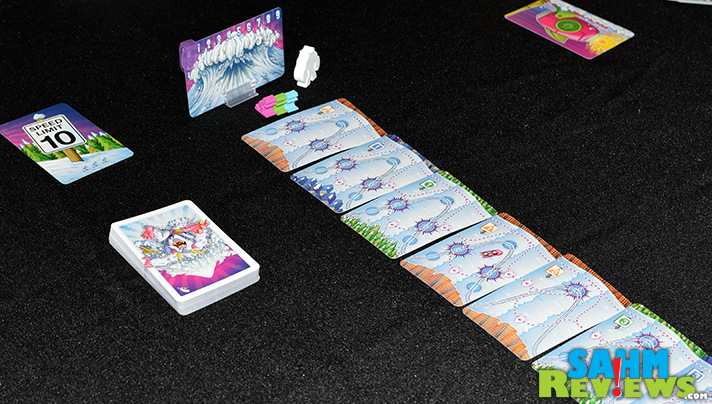 Twelve cards are laid out in a row, creating the mountain you must conquer. Each player is dealt four additional mountain cards to their hand and given a “Rocket Status Card”. Avalanche at Yeti Mountain is played over a series of rounds, each divided into six actions. 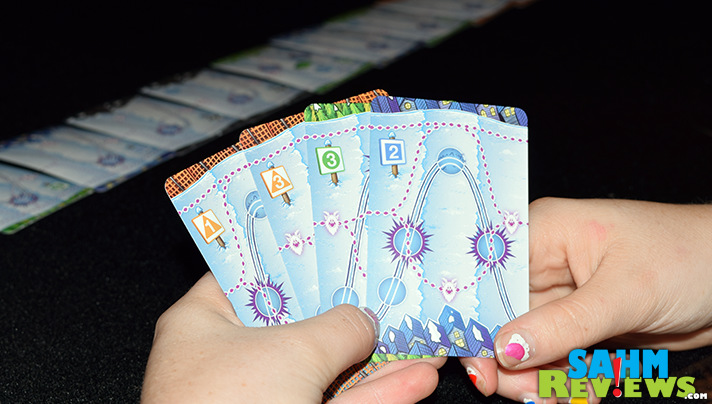 Everyone secretly selects a card from their hand and places it face down in front of them. You may select two cards instead if the cards have the same symbol. The numbers on the card represent your speed, and when playing two cards, is the sum of the two numbers. 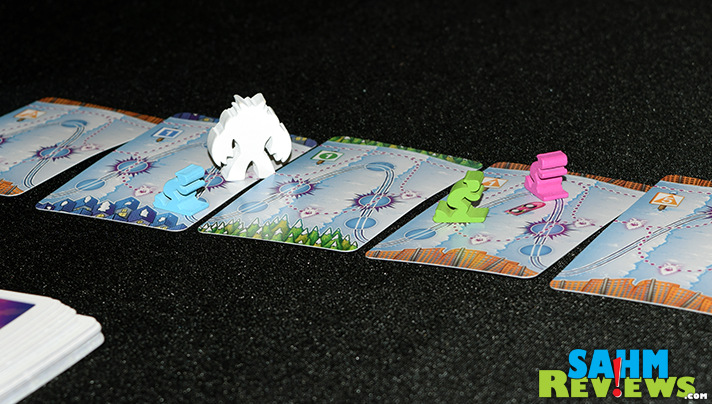 All players reveal their choices and compares them to the speed limit on the mountain (determined by the number of players). If the total of everyone’s speed exceeds the limit, the player going the fastest crashes and only moves one space! Each skier moves down the mountain, from fastest to slowest, equal to their speed. If ties, the further-behind player goes first. Only one person can be on a space, so if you land on an occupied spot you are allowed to move one more spot forward until there is an open spot to land.

To “Rocket Jump” you must either play a card with a symbol matching the card your skier occupies before moving or play any two cards with matching symbols, all while your Rocket Status Card is active. When you rocket jump, your skier completely jumps over the next card (also ignoring any remaining spaces on your current card) and starts their normal movement on the next card. 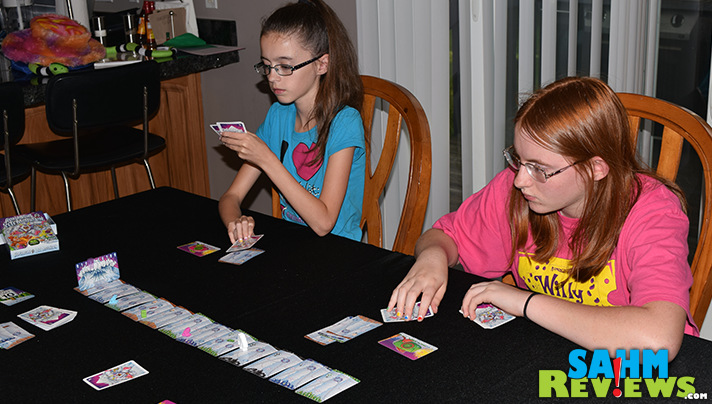 The Yeti also moves each round and moves along his own path equal to or less than the speed of the rounds fastest player. They can move uphill or downhill at the choice of the player in last place. If the Yeti moves through a space occupied by a skier, they must flip their Rocket Status Card to the inactive side. They will not be able to utilize it during the next round. Any player not affected by the Yeti may flip their Rocket Status Card to active and can use it on their next turn.

Lastly the avalanche continues moving equal to the current avalanche speed. Each snowbank counts as one space, and there are two or three on each card. If a skier is hit by the avalanche, they are eliminated and removed from the mountain. The current speed limit is adjust according to the number of players left. Everyone discards the cards they played and draws back one card (even if they just played two). Then a new round commences until one skier moves off or jumps over the final card at the bottom of the mountain. Of course, it is possible there will be no winners if the avalanche consumes them all!

As you can see, Green Couch Games has a wide variety of game types, nicely packaged in small boxes. These are but three of their titles with others in the works (or currently sold out!), which we hope to bring to you in the future. Take a look at their Facebook and Twitter timelines for timely news about their current projects and let them know you want to learn more about them on SahmReviews!

16 comments on «We Found (a) Green Couch at Geekway»