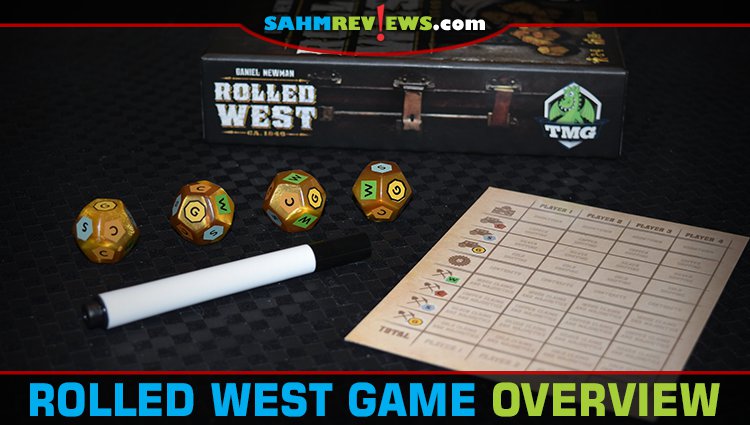 One of the hottest trends in board games right now is a genre being called “roll and write”. This style of game typically has players rolling one or more dice and recording the results on their own score sheet. The term has become so generic that it covers similarly-styled games that don’t even use dice! Our recent feature of Welcome to… is a perfect example. Instead of dice it utilizes cards and players must choose which of the three combinations they will record into their growing neighborhood.

Now you might be thinking, “Hey, I’ve played a roll and write game decades ago!” Yahtzee is considered the first of the category which challenged you to roll a set of dice to try to get poker-styled results and then scoring them on your sheet. But the only decision you had to make was when to stop rolling and what to score if you didn’t get what you were aiming for. Today’s roll and write games are so much more than that.

At this year’s Origins Game Fair, Tasty Minstrel Games was debuting their first submission into the roll and write category, Rolled West. If you’re a long-time reader of SahmReviews, you already know that one of our all-time favorite games to use to introduce people to this new world of hobby games is Gold West, also by Tasty Minstrel Games. Rolled West, although created by a different designer than Gold West, is set in the same theme and utilizes many of the same scoring opportunities as found in the original! 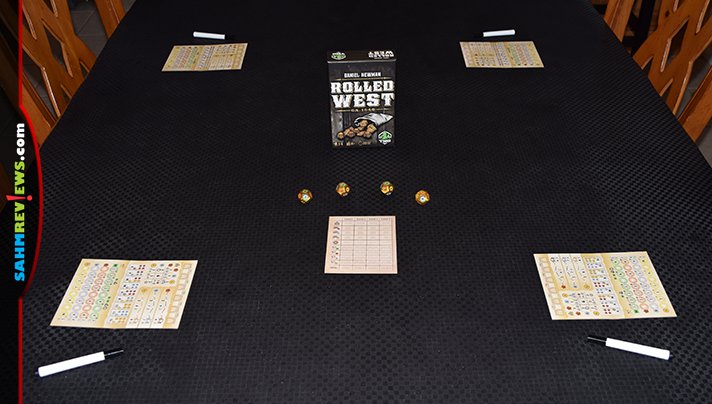 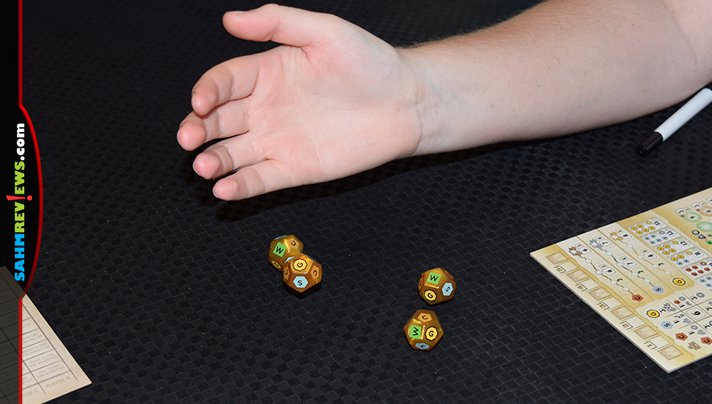 Just as in Yahtzee, taking a turn in Rolled West is very simple – just roll the four dice! That’s where the similarity ends. There is no re-rolling and you’ll have multiple choices to make about how to use your dice results. Each die face contains two pieces of information – a color denoting one of the four terrains in the game (woods, valley, hills, mountain), and a letter representing the four resources (wood, copper, silver, gold). The first thing you’ll do is choose a terrain for your turn. 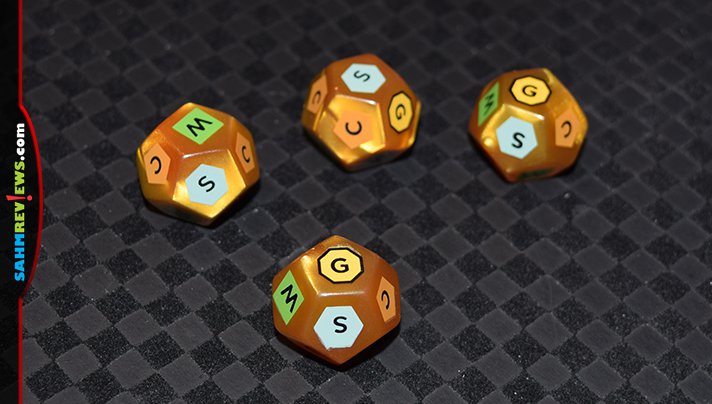 Choose one of your four dice that represents the terrain you want to work with this turn and set it aside. You will not use the letter on that die at all – it only serves to denote the active terrain for your turn. Your remaining three dice can be spent in various ways or banked for future turns! Once per turn you can file a Claim by spending a single wood (W on the die) to build a camp or two wood for a settlement. Pay those resources and draw a triangle (camp) or circle (settlement) on your board in the row of the active terrain this turn. Note – when building a settlement, it takes up two spaces (a good thing)! 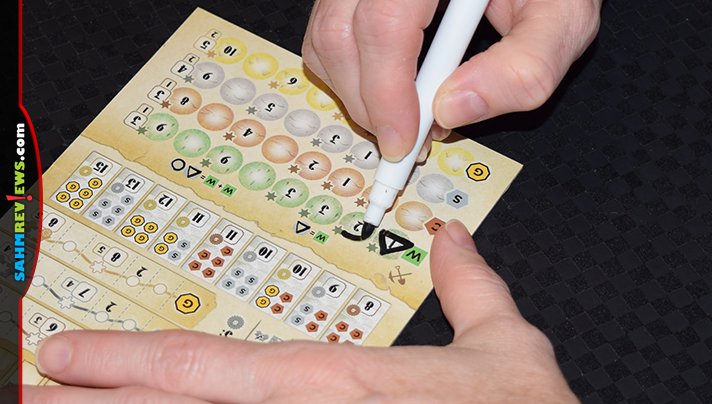 Another option on your turn is to complete a contract on your score board by spending the required resources and immediately earning those points. You may also elect to spend two corresponding metals to purchase one of the remaining Boomtown offices which typically award end-game bonuses. Lastly, you can always ship any number of metals away from the city, allowing you to cross off spots on the corresponding line (gold, silver, copper) and working your way to higher point totals. The first to reach certain positions in these lines will earn higher scores than those who reach them later in the game. 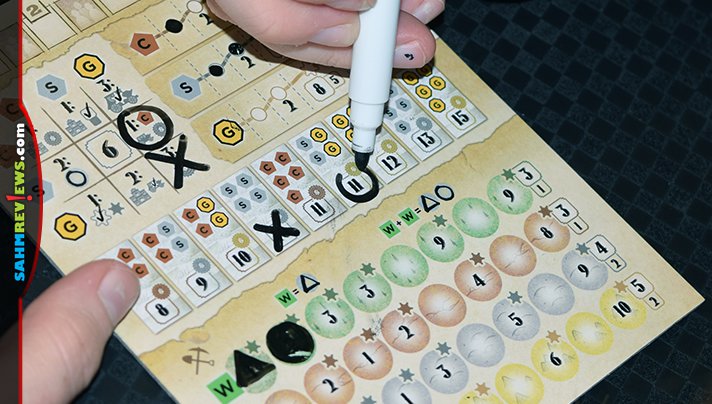 If you have leftover resources that you are unable to spend, you can bank one for use later by writing down the resource type in the white box at the top of your score board. Also once per round you will earn an additional resource by banking one from a player on either side of you. Don’t forget to do this as you can only bank one resource in between each of your turns! Fortunately you can spend as many as you like on your own turn! 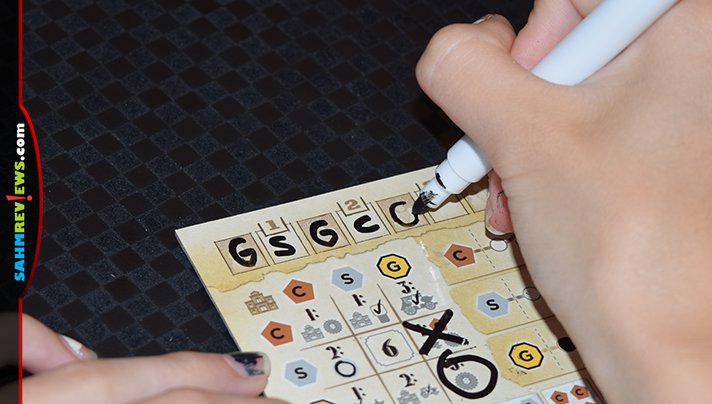 An entire game of Rolled West lasts only six rounds, keeping the entire game under 30 minutes in length. Points are awarded for majority in each of the terrains and are added to points for contracts completed, shipping bonuses and any end-game bonuses from from Boomtown offices built. The player with the highest total wins Rolled West! 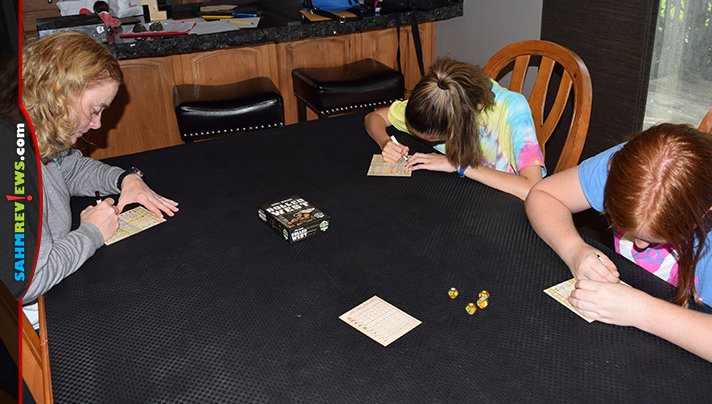 We’ve played a number of roll and write style games and have to admit, Rolled West is the perfect bridge between this popular genre and modern hobby games with multiple scoring options. It’s probably not an introductory game as we found with Gold West since it is more complex that others on the market, but definitely one of the best values and one that will get many more plays. While others may get boring after a few plays, we don’t see that happening with Rolled West because you can try out a different strategy each time you play!

You can pick up Rolled West at your favorite local game store or on Amazon for under $20. If you want to keep tabs on what Tasty Minstrel Games is working on for the holiday season, check out their website for the latest announcements and follow them on Facebook or Twitter to keep up to date!

What is your favorite game that has been converted to roll-and-write?