Remember a couple weeks ago when I admitted defeat and frustration when I played Pipeline? It had a lot going on and sometimes it takes me a couple times to grasp the flow of a game before I really get the hang of it. A few years ago while attending Geekway to the West, I played a board game called Carson City and had much the same feelings. In my defense of that one, we were playing at like 11 at night or so after having played games since around 8 in the morning. I was kind of spent so even the simplest of games probably would have gone over my head at that point.

I was reminded of that late-night experience when we played a scaled-down spin-off called Carson City The Card Game. This city-building game is to Carson City what Rolled West is to Gold West. It’s a quality version that uses several of the same principles as its namesake but in a format that was lighter like Honshu, Between Two Cities or Warsaw City of Ruins. The goal of Carson City The Card Game is to earn the most victory points by developing the wealthiest city in your region. 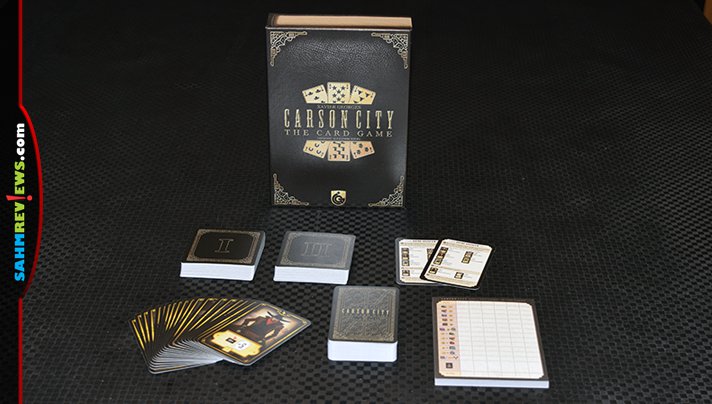 There really isn’t much setup to Carson City The Card Game. The game consists of auction cards, terrain cards, character cards, player aids and a scorepad. Each player is given a set of auction cards numbered 1-9 in one of six different suits. The Era I and Era II terrain cards as well as the character cards are shuffled independently. Era I and the character card deck are placed in the center to use as draw piles and Era II is set aside to use later. Give each player a player aid and set the scorepad aside until the end of the game. 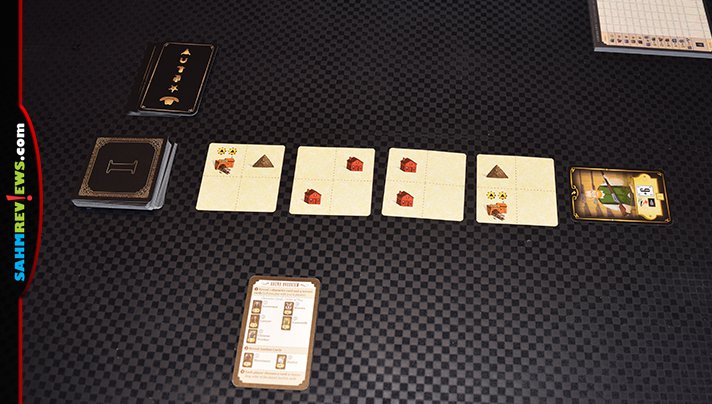 The game takes place over two Eras consisting of 9 rounds each. To begin the round, the dealer draws one character card followed by four terrain cards. (5 terrain cards are dealt in 5 or 6 player games.) Terrain cards display four land parcels with one of several buildings or land characteristics. 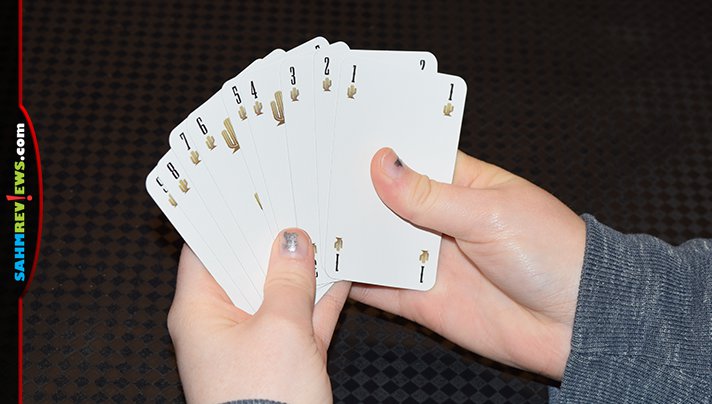 Simultaneously, all players select a card from their hand to bid on player order. You’ll use one card per round so you need to balance which you play based on how bad you want a particular terrain card or character. 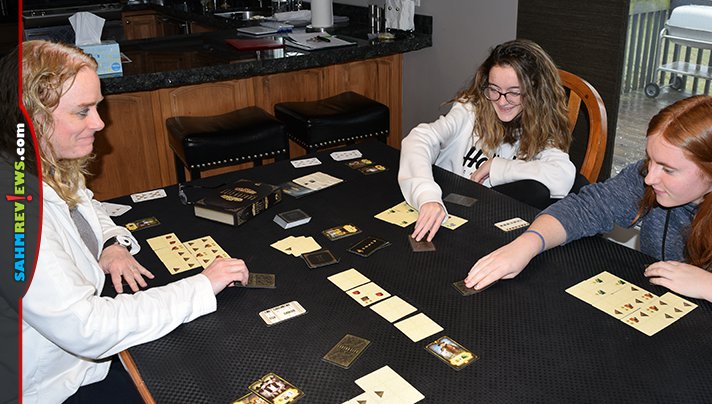 After all players have selected a card as their bid, everyone reveals. The player with the highest card selects first and has the option of any of the available terrain cards or the character card. The player with the next highest card gets to choose next from what remains. This continues until all players have selected one card. Any remaining cards are added to a discard pile. Place your used bidding card aside until the start of Era II for the next 9 rounds of bidding. 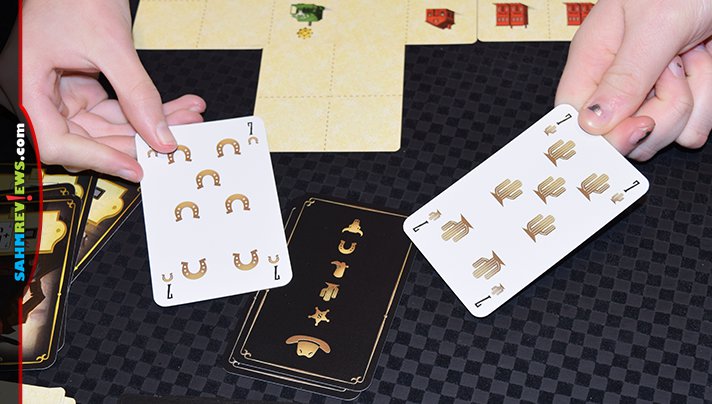 With only 9 cards to bid with and a decreasing number of options per round, there are bound to be ties. To determine who wins, you look at the back of the card on the top of the character deck. There is one large symbol followed by five smaller ones that correspond to the player’s bidding decks. Starting with the large icon and working down, this is the pecking order for breaking ties. 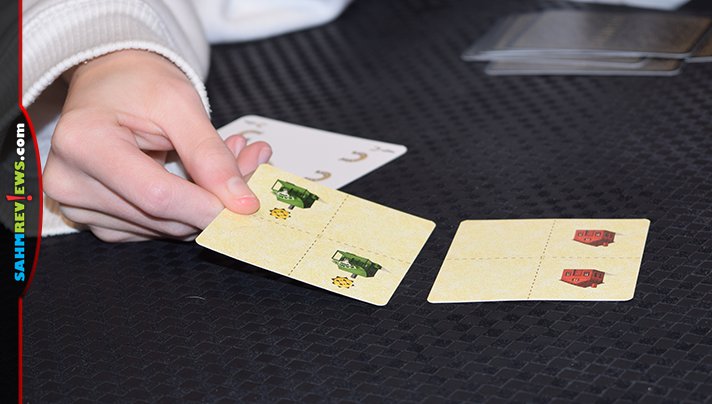 But the meat of the game comes in the process of building an 8×8 grid of parcels. The first parcel begins your development then all future cards must be placed orthogonally to an existing property. Each of the different types of buildings scores differently. For example, mines earn 2 victory points (VP) for each adjacent mountain while banks and drugstores each earn 1 VP for each adjacent house. Hotels provide 3 points regardless what they’re sitting next to. 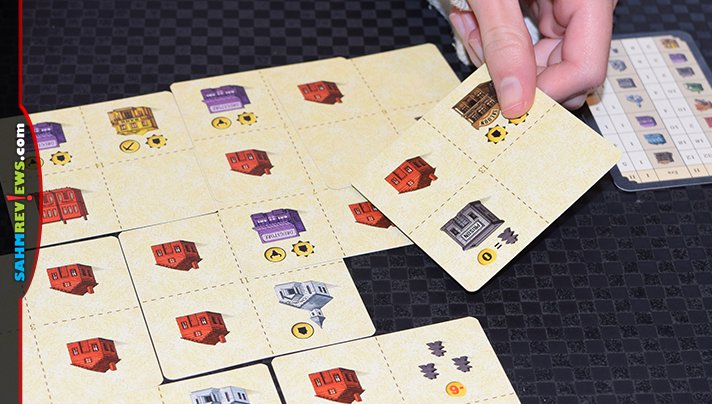 You’re restricted to an 8×8 property and often there are a cards with empty parcels. You may build over these unbuilt spaces with another terrain card and also may lay a card over spaces that have similar iconography. In the image above, the player is building a house and saloon over a house and empty parcel. 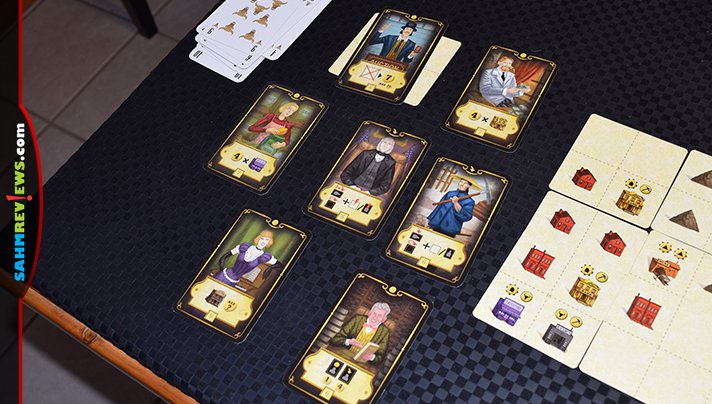 In lieu of collecting a terrain tile, you may opt for a character card. These have a variety of powers to use during the game or victory points to claim at the end of the game. Some increase the value of your bidding card, another allows you to expand the size of your grid and others award points based on meeting certain building criteria.

After 18 rounds (9 per Era), players tabulate their totals based on the various buildings and bonus cards. Carson City The Card Game is a fun game with a lot of variety of options for how to prepare your development. You can find copies on Amazon or ask your local retailer about availability. Visit Quined Games to learn more about their various titles. Follow them on Twitter and Facebook for the latest updates.

Have you played a pared down version of a harder game?