I don’t know how normal people spend their 25th wedding anniversary, but we aren’t normal people. Scott and I have wanted to plan a trip overseas for years, but I didn’t push for it for our anniversary. As much as I wanted to go, I didn’t want to get my hopes up then not be able to get commitments from anyone to watch over the girls in our absence. In hindsight, we should have planned a trip overseas WITH the girls, but that’s behind us now. We will have to make those plans soon! I digress… instead, we made our annual trek to Indianapolis for Gen Con as a family. We enjoyed an amazing dinner that Scott coordinated then returned to the hotel where we did what our-kind-of-normal does: play board games. It was on the front-end of Gen Con so we knew we wouldn’t have a chance to purchase anything yet. Just in case that was true, we brought Warsaw: City of Ruins from North Star Games with us. 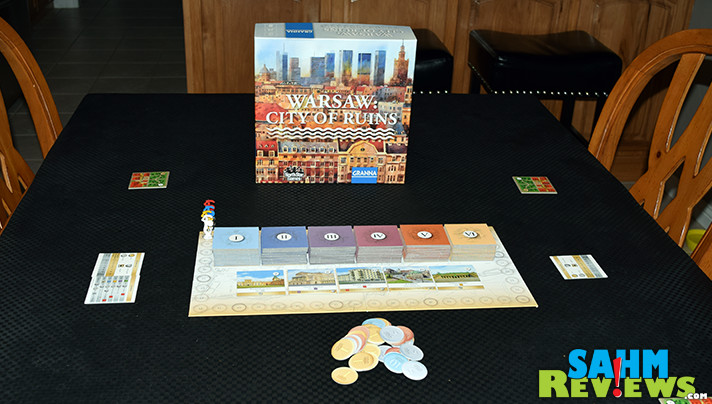 Historically, Warsaw has experienced destruction more than once and is often referred to as one of the most war-damaged cities in history. This game is based on that concept with players building, destroying and rebuilding in their own tableau in a similar fashion to the semi-cooperative game, Between Two Cities. It’s designed for 2-4 people with each working on their own. No cooperation of any kind here! To begin the game, place the board in the center of the table. Each player selects a mermaid figure and places it on the scoring track then takes one of the tiles marked with an “S” as their starting tile. The remaining tiles are divided into their different eras, shuffled and added to their respective place on the board. Milestone tiles (which will be resolved at the end of each round) are placed on the board as well. Players are given starting funds then it’s time to start building! 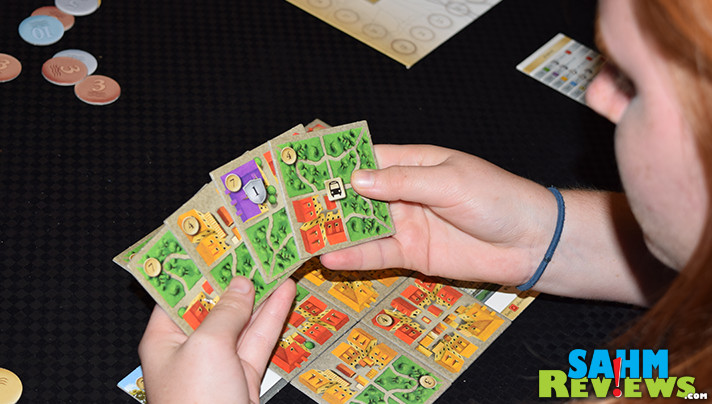 At the beginning of each round, tiles are equally divided among the players. You’ll select one from the stack, reveal, pay the cost in the upper left corner and place it into your city. The remaining tiles in your hand will be given to the opponent next to you (clockwise in some rounds, counter-clockwise in others) to pick from. If you cannot afford the cost to build a property or choose not to build, you’ll select one to discard (hint: be mindful of the ones your opponents would really like) and you’ll earn 3 coins for it. 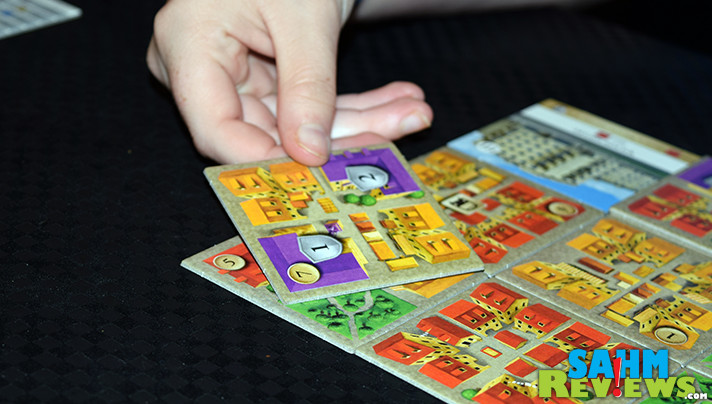 When you build a tile, you’ll place it on an empty space orthogonal to one that is already in your city and pay the full price. As an alternative, you may build over an existing one and pay the difference between the current cost and the value of the one you’re building over. The goal at the end of the game is to have the most victory points, but the only way to build onto your city is to pay for construction. That means you’ll need money. And you want victory points. Decisions, decisions! There’s a careful balance between working to get money and trying to achieve points. You’ll be working to create a 3 x 4 grid but there’s a lot that will be happening based on which tiles you choose. It probably helps to understand what the various types of tiles do so let’s discuss that! 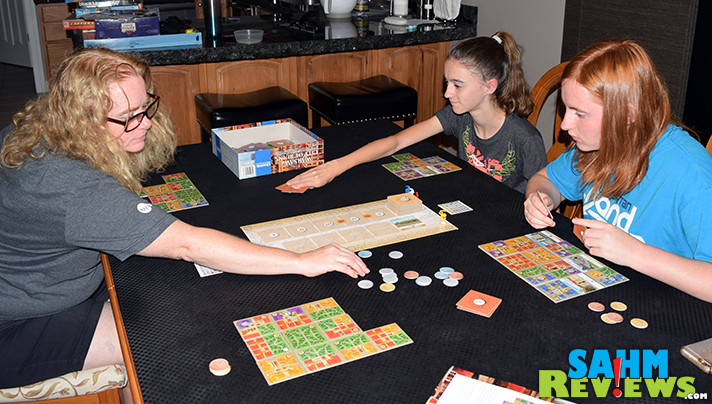 There are different types of tiles that range in value and type depending on the era. The majority of the tiles are color-based and either provide victory points or money at the end of each round. Residential areas are red, commercial areas yellow, blue represents industrial, green are parks and purple is cultural. Scoring and income are based on areas so when you place your tile you’ll want to be mindful of how you flip, turn and place it next to others. As an example, you’ll be able to score one park (green) area and earn points based on how many residential (red) areas are next to it. So if you have an uninterrupted green space, you’ll be able to add multiple residential areas and earn points according to sliding scale. You will also receive victory points for each cultural (purple) area as designated on those tiles. Once you have two or more bus stations that are not on orthogonal tiles, you will earn two victory points for each. With respect to money, you can earn one coin for each separate residential (red) area next to a commercial (yellow) area. If you happen to have one residential area connected to two different commercial areas, you’ll earn twice! Industrial (blue) areas earn the coins designated on their tile with a negative victory point for each residential area next to it. After all, who wants to live next to an industrial plant? The final type of tile that may be purchased is a public building and provides the benefits printed on each particular tile. Don’t worry if the iconography is confusing as the rule book gives details on each tile. 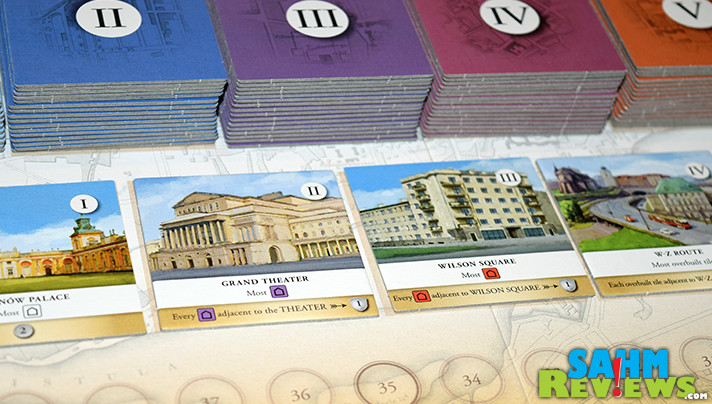 At the end of each round, the points and income are tallied and awarded. The milestone is also given to the player that meets the respective goal. The printed effect is awarded for each milestone building then each public building. After the third round of building and discarding, something horrible happens. War. Destruction. Kaboom. As a representation of the destruction caused during World War I, you’ll need to select one (or one overbuilt stack) of the tiles within your city to destroy and permanently remove from your city. After each player has done this, the scoring and income continues as normal. At the end of the fourth round, TWO tiles need to be destroyed to reflect the events of World War II. Thank goodness you’ll have two more rounds to be able to rebuild! 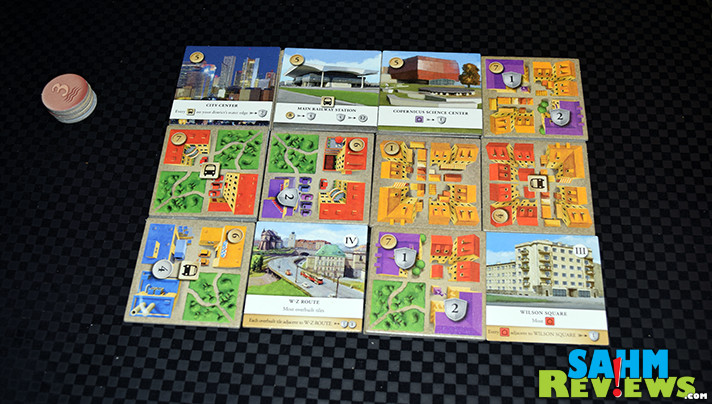 The player with the most victory points at the end of the sixth round is the winner. It’s a fun game and provides an opportunity to learn about history and opens the door to a discussion about war and rebuilding. We’ve played Warsaw: City of Ruins several times and each has provided a very different experience. You can pick up a copy direct from North Star Games or order Warsaw: City of Ruins on Amazon. We’ve watched North Star Games thrive over the past couple years and were recently awarded the Kennerspiel des Jahres award for one of their games! You can learn more about their adventures by engaging with them on Twitter and Facebook.

Did you know about the history of Warsaw?