Last weekend one of our friends celebrated his 50th birthday. Pandemic or not, his choice for how to spend his birthday was to join us to play board games. We encouraged him to let us know which games he wanted to play and that’s what we would do. It didn’t matter to us which games we played because it was his birthday and we were thrilled that he chose us to spend the day with. Among his selections was Neom from Lookout Games. It’s a city-building game for up to five players. If you’re like me, you’re probably asking what the name means. You’re building a futuristic city over the course of three generations so it could be a tribute to the planned technologically advanced city in Saudi Arabia. We couldn’t find any specific reference in the instructions but the tagline on BoardGameGeek referenced neomodern. To me, it had the feel of Warsaw: City of Ruins, but incorporated several other ideas that made it even more fulfilling to play. 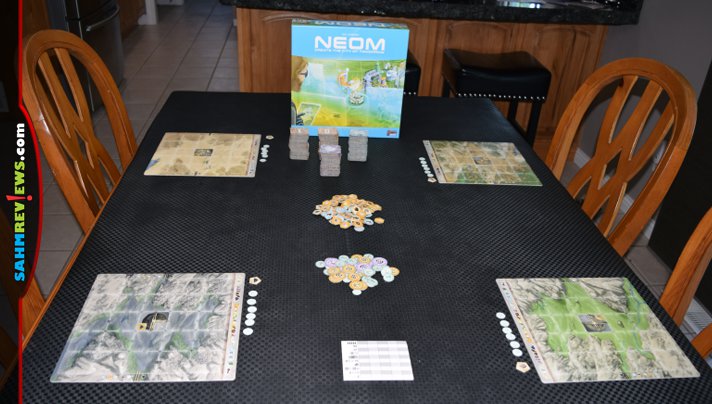 Each player takes a random city board along with six coins and the raw goods token that is depicted on the center square. Separate the Cornerstone tiles and each Generation then shuffle each stack to ensure they’re randomized. (Don’t forget to remove any tiles that don’t match your player count.) Place the goods tokens and currency in the center of the table to create a general supply. Deal four Cornerstone tiles to each player and return the remainder to the game box. 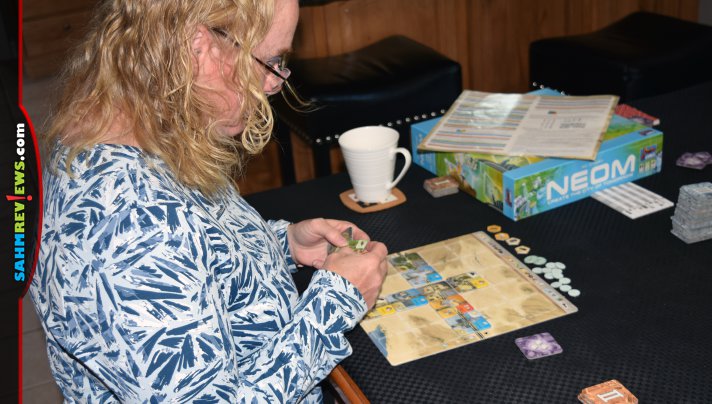 As I mentioned before, you’ll simulate three generations of building with each represented by a round. Before that, however, you’ll have a preliminary round where players select Cornerstone tiles that may be incorporated into their cities later in the game. Each player selects one of their Cornerstone tiles to keep then passes the rest to the person on their left. Everyone continues picking and passing until there are three per person with the final being discarded from the game. 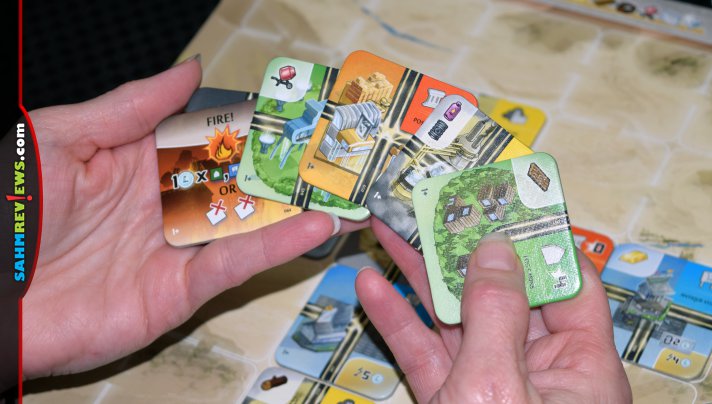 Let the building begin! Each of the three rounds is identical except you’re using the associated Generation Tiles. The three steps include 1) selecting a tile, 2) taking an action and 3) picking up tiles. Begin each round by distributing eight Generation tiles to each person. You’ll select one to add to your city, discard it to earn five coins or discard it in order to build a Cornerstone tile. 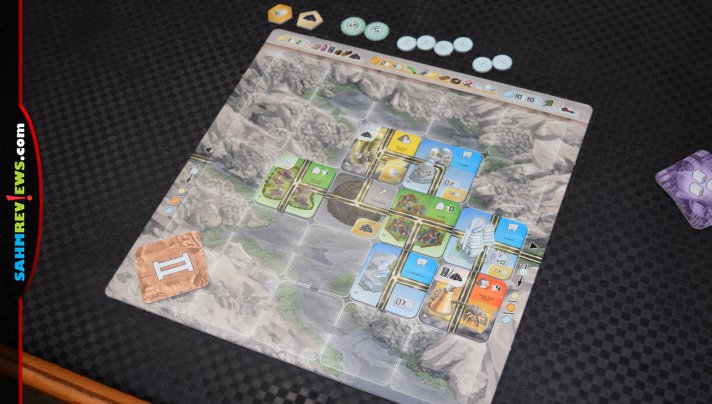 There are different tile types including residential, commercial, industrial, public, resource and disaster. In addition, there are roads that indicate which directions you may build from that particular area of the city. 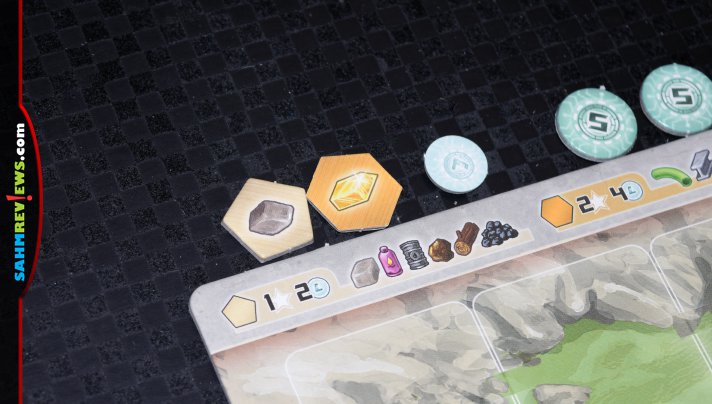 Some tiles have a resource requirement or cost in order for you to build them. If your city produces that particular good then you can build it. If another player has it, you may pay that player for access to that resource then you may add the tile to your city. Whenever you place a tile that generates a new resource, you add that marker to the top of your board so other players know where to go for needed goods.

Once each player has selected seven tiles from the rotating stacks, the final tile is discarded and a new phase begins. With each round, the tiles have more difficult cost requirements, but they also have increasing value for your city. At the end of each generation, players collect income for any tiles that offer it.

Modern or not, no city is perfect. There can be crime, fires and floods. If a player selects a Disaster tile, all other players take damage to their cities at the end of the current turn. You’ll opt to pay a fine or sacrifice 1, 2 or 3 tiles depending on the generation. These issues can be avoided by adding police and fire protection to your cities. 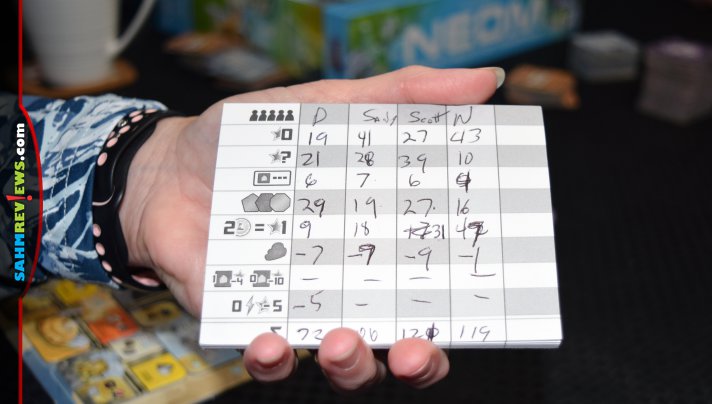 One thing to keep in mind is that each city needs power as well as residents. However, most energy causes pollution which degrades the value of the area around it. Residential areas increase in value as more are directly connected to each other. At the end of the third generation, players tally their scores to see who managed to build the coolest, most innovative and valuable city.

I thoroughly enjoyed playing Neom and look forward to getting it back to the table again. There was enough happening to keep things interesting but not so much that it felt overwhelming. The disasters added an extra twist, but can be avoided if players select alternate tiles and discard the disaster in the final turn each round. If you’re playing with very strategic players, be sure to plan on protecting your city! Copies of Neom can be purchased on Amazon, but check with your local game retailer for availability as well. Visit social media to see what Asmodee (Twitter, Facebook) and Lookout Games (Twitter, Facebook) are rolling out in preparation for this holiday season!