Broken record. That’s what I feel like sometimes. I say the same things over and over again to my kids to reinforce and remind them of a little bit of everything. Here on the website you may see me often repeat myself as well and it isn’t because I forgot that I said it. The things I revisit here are what I consider to be important ideas that I want to emphasize. One of those is that you shouldn’t judge a book by its cover. As I explained in our overview of Tattoo Stories, it’s easy to misinterpret what a game is about and who can play it. For instance, contrary to popular misjudgment, people with color deficiencies can play Hues and Cues. The latest example is Dungeon Drop from Gamewright. As with Deadly Doodles, Dungeon games aren’t all doom and gloom, nor do they have to take hours upon hours to play. 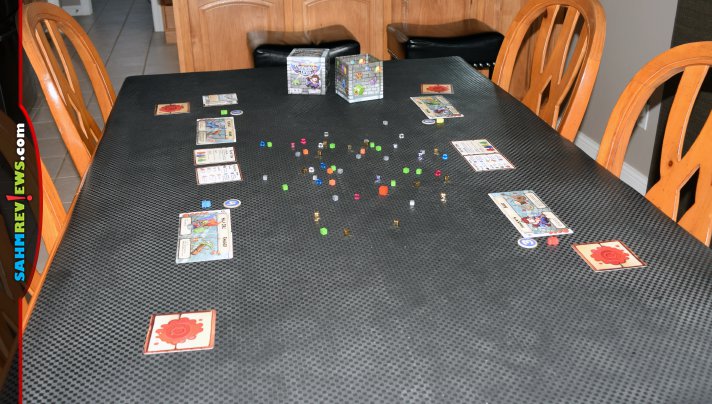 Dungeon Drop is a family-friendly dungeon game for one to four players. You’re acting as a brave hero who is exploring the dungeon and looting for treasure. Each player will have a unique character created by a combination of random race and class cards. Shuffle those two decks separately and deal one card to each player. Deal one face-down quest card to each player as well. Next, it’s time to prepare the dungeon filled with loot and enemies. Temporarily put the large cubes and dice in the game box. Combine the smaller cubes with the red dragon cube. From 6-12″ above the table, drop the small cube combination allowing the cubes to spread out across the table. No more than one or two should be touching each other. 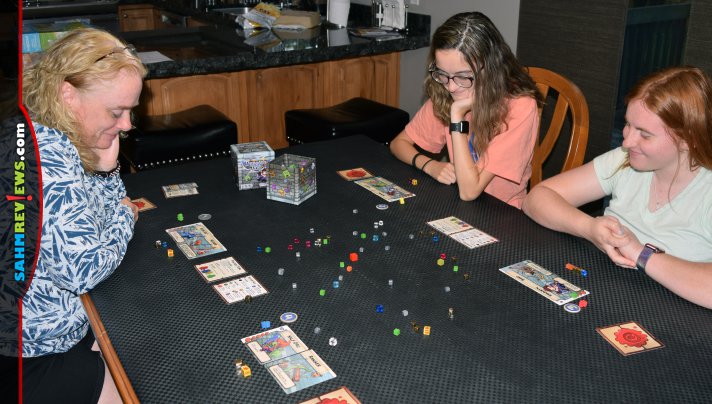 The cubes represent the loot such as gold, relics and potions as well as goblins, trolls and the dragon. Dungeon Drop takes place over three rounds with each hero taking three steps: Explore, Act and Loot. The player order is determined by the initiative number on the top of the player cards. 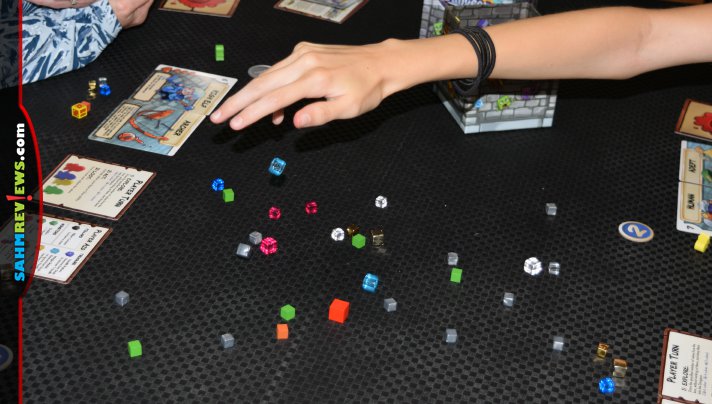 During the Explore phase of your turn, draw cubes from the reserve and drop them into the dungeon. This helps repopulate the loot – and enemies – to keep it fresh and fair for future players. The number of large cubes and dice that are dropped is determined by the player count.

Each player has different special abilities as shown on their race and class cards. After the Explore phase, you may utilize either your race or class ability as part of the Act phase. Some abilities allow players to flick cubes in the dungeon. Flicking involves using one finger to kick a piece in the desired direction. If you happen to kick it off the board, it is returned to the dungeon as part of the next player’s Explore step. 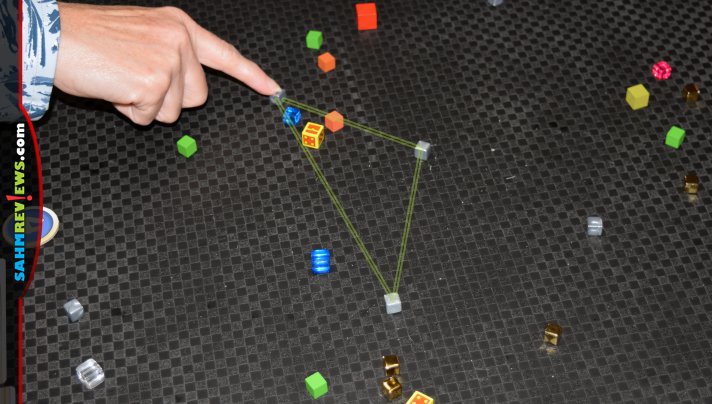 The next step is to loot! Gray cubes represent the pillars that provide stability for the dungeon. A room is represented by the triangular space between any three pillars. Because the cubes were dropped randomly, some rooms will be larger while others are smaller. Identify three gray cubes and outline your room. You’ll collect all the items within that space. Monsters collected take away your health while all treasure cubes go into your stash. Potions improve your health while shields protect you from monsters. You are not able to claim a room that has enough monsters in it to take away all your health. 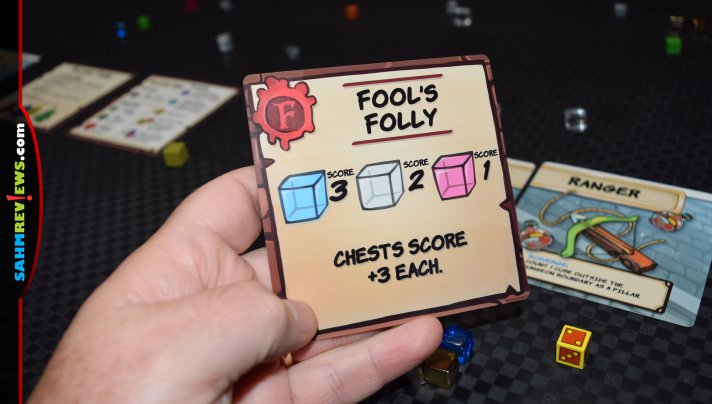 After each player has taken a turn, the player order is redetermined based on the number of treasure cubes everyone has. The player with the lowest goes first in the next round. After each player has raided the dungeon three times, you calculate the value of your treasures based on your personal quest cards.

In addition to playing up to four people, Dungeon Drop can be enjoyed solo or even in teamwork mode. This variety gives you the option to switch it up from time to time. Want to head off and collect the loot? Find Dungeon Drop on Amazon or direct from Gamewright. It can also be found at local retailers including family museums and department stores. Explore Gamewright on Facebook and Twitter to discover what other treasures they have in their product lineup!

What do you think would be the most valuable thing to find in a dungeon?