When it comes to games of any type, there are very few themes or licensed properties that make them an instant-buy. Pokemon is one since Madison has been playing all of the different versions for over a decade. I enjoy games that remind me of my childhood, like Stop Thief!, Operation and Stratego. But there is one theme we have to have everything of – Super Mario Bros.

Not just video games. We have collected plastic figures, trading cards, stickers, construction sets, happy meal toys – you name it, we have tried to complete the collection. I think we own every Mario-themed video game for almost every console, all they way back to the original NES. Maybe we secretly want to be plumbers…

Last year USAopoly published a couple games with a Mario theme – Super Mario Level Up, a board game that rewarded who could get closest to the top and remain there at the end of the round, and Super Mario Bros. Power Up, a card game for up to eight players. This year they followed up to these successes by issuing a second version of this affordable card game, still with a Mario theme, but utilizing the underwater world familiar to players of the original video games. 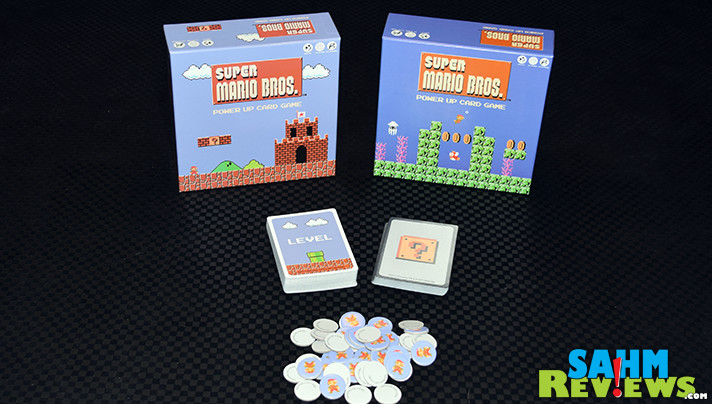 Whether you’re partial to the original above-ground world, or splurging for the underwater realm, both games play in exactly the same way and have identical cards and components. Inside either box you’ll find a deck of 52 Level Cards, a deck of 30 ? Cards and 50 Extra Life Tokens. Each player receives four of the Extra Life Tokens to begin the game along with one of the ? Cards. 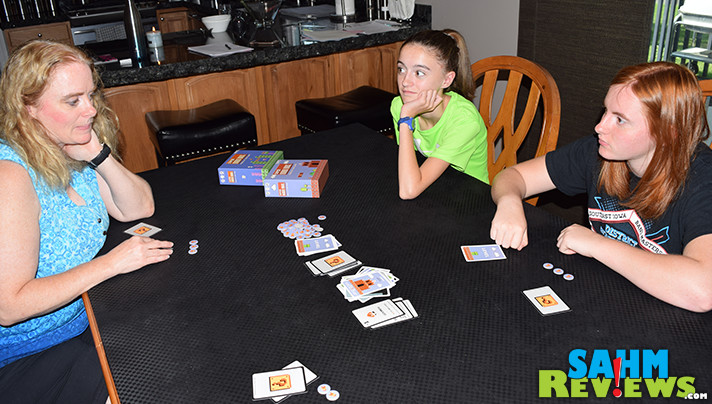 Each round of Super Mario Bros. Power Up is played in the same manner, with the dealer rotating clockwise at the end of every round. All players are dealt one of the Level Cards, which they peek at to determine their level for the round (in the upper left corner of the card). Beginning with the player immediately to the left of the dealer, they must decide whether or not to keep their card. If they do not want it, they may force the next player in clockwise order to trade cards with them. 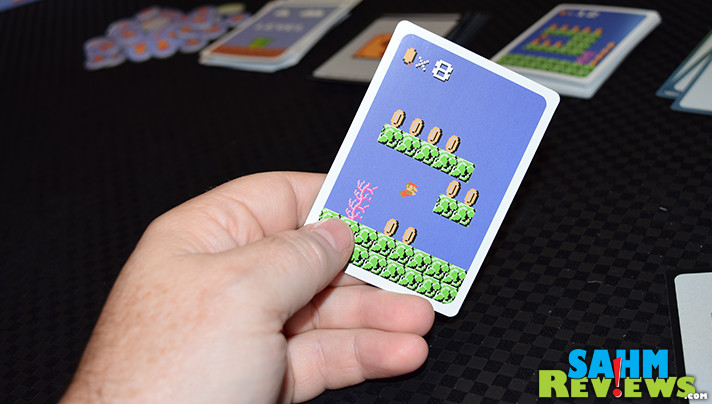 The next player also has the same decision to make about the card they now hold – keep it or trade it. This continues around the table until the turn is back to the original dealer, who then must keep their card or trade it away by discarding it and drawing a new one from the top of the deck. Any person who draws a Castle Card immediately plays it and draws an additional ? Card to their hand. The people with Castle Cards can not lose the round nor be traded with. In effect, their turn is nearly over for the round. 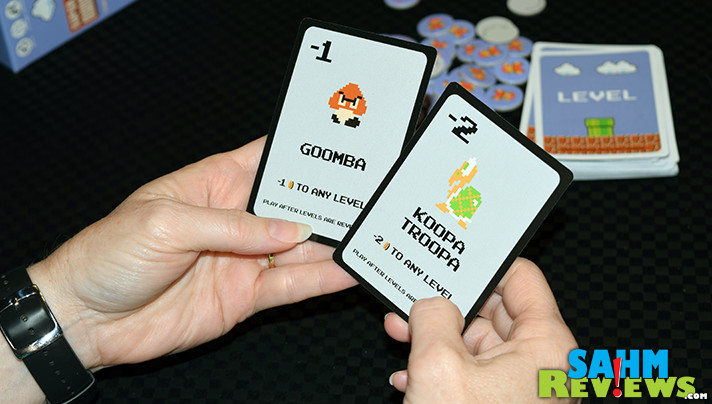 All people reveal their Level Cards and any players that match the level of another card played in the same round are also awarded a ? Card from the draw deck. Now players have the opportunity to play their ? Cards from their hand to modify the values of their (or other’s) Level Card. Multiple cards may be played, in any order, keeping in mind that effects do not stack. Effectively, a newly-placed card cancels out the card previously played and adds the new effect to the Level Card. 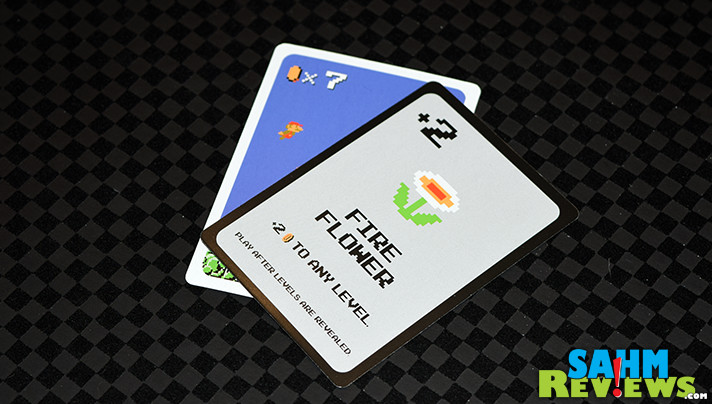 Once all players have finished playing any modifying ? Cards, the final levels are compared. The person(s) with the lowest level loses an Extra Life Token. All played cards are discarded, the decks passed to the new dealer and a new round begins. If you run out off Extra Life Tokens you are eliminated from the game. The last player with tokens is the overall winner of Super Mario Bros. Power Up!

Correctly advertised for ages 8+ and lasting 10-30 minutes (depending upon the number of players), you can find copies of the land version on Amazon for under $10 delivered! If the Underwater Edition is more appealing to you, swim over to your local Walmart where you’ll find this exclusive title on their shelves. From looking at the games, it appears you could easily combine more than one copy and support more players, including different themed versions. Maybe someday they’ll have a Super Mario 3D copy we can mix in! Follow USAopoly’s Twitter and Facebook timelines to see if that ever happens!

Who is your favorite Mario character?