When people ask what my favorite types of games are, I have a tough time deciding. I love the cooperative nature of games that make players work together. I also love the thought that is required for a strategy or abstract game. However, dice games stand out at the top of the list because they require thought but add a touch of luck into the mix. Even the most skilled player can be beat if the dice are not on their side. This past fall, we gave you an overview of the Space Base dice game from Alderac Entertainment Group. In it, every action is heavily contingent on the luck of the roll of every players’ dice. Their art-themed board game that released last year, Atelier, gives the players more of the decision-making of how to spend the dice results. 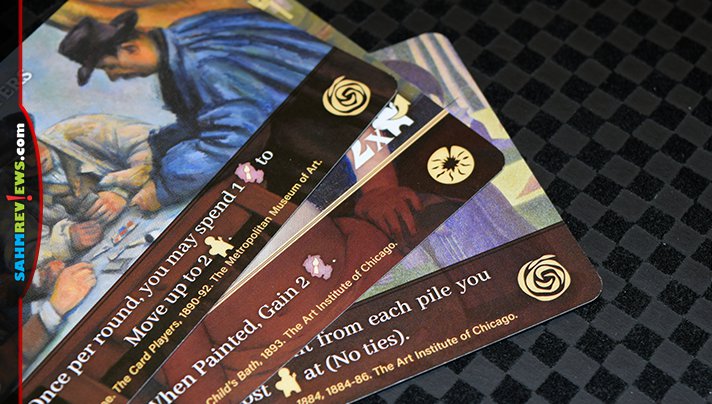 I’m always pleasantly surprised when board games teach a lesson about math, science or history. But in the case of Atelier, the title of the game itself is the first lesson! That’s the name given to an artist’s workshop. You’ll be playing the role of a 19th century painter trying to manage your ateliers (workshops) by rolling dice and assigning students the jobs of acquiring paint for your masterpieces. As a bonus, you’ll learn about four different types of works of art and where they can be found: Impressionist, Post Impressionist, Realist and Romantic. 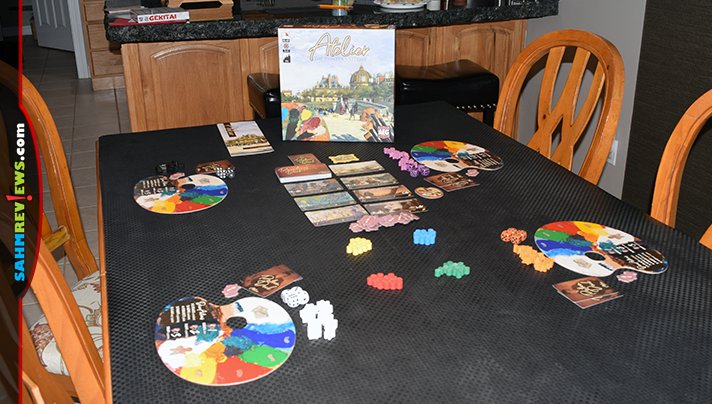 Set up the game by shuffling the deck of paintings then laying seven face up in the center of the table. Place the remainder next to it to form a draw deck. Shuffle the Patron cards and deal two to each player. Everyone will keep one and place the other on the bottom of the Patron deck. Each player takes a player board, an Inspiration token and the 12 students and four matching dice in the chosen color. Sort the Paint cylinders into separate piles. Give the starting player token to a player then beginning with the player to their right, work clockwise and place one student in front of one of the piles of paint. 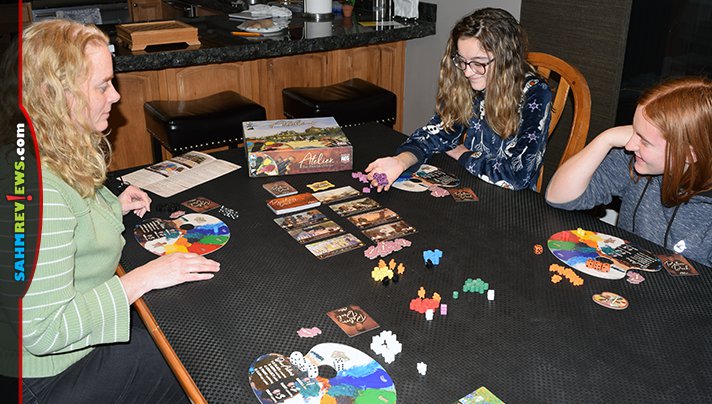 Atelier is played over the course of several rounds. On your turn you’ll have a couple of choices on how to spend your dice. Once you’ve completed your turn, play passes clockwise and continues around until everyone has spent all their dice. The player to the left of the starting player takes the start token and begins the new round. When someone has completed their 3rd Masterpiece, the end of the game is triggered. You’ll finish that round then wrap up the game with one final round. The player with the most victory points is the winner. 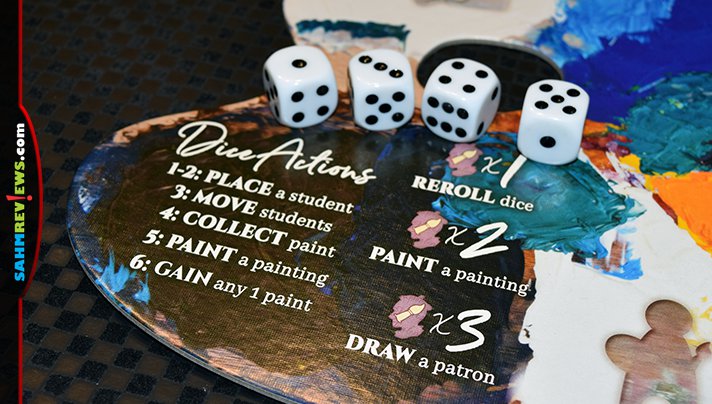 That was a pretty wide-sweeping brush to explain how to play Atelier. I supposed now would be a good time to paint a more detailed picture for you. There are two types of actions in Atelier: Dice Actions and Inspiration Actions. At the beginning of your turn, roll all your active dice. You must either spend one die of any value to acquire an Inspiration token or spend one or more active dice to take their corresponding actions. When the dice are spent, you’ll move them to your player board and will not use them again until the next round. 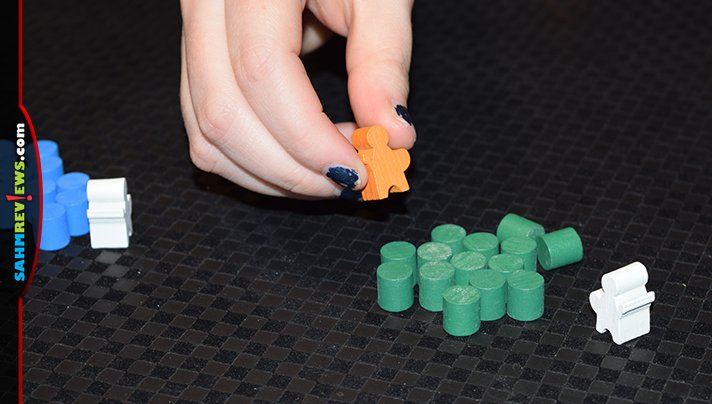 Dice Actions are mainly used to acquire paint and are based on the value of the pips shown of your active dice. I am going to do these out of order because it will help better explain what the others do. If you spend a die with a value of 4 then you collect one paint cylinder from each pile where you have the most students. This is the primary way to gain the paint needed to create the masterpieces and has the potential to earn you more than one can. Otherwise, you may spend a 6, and take one can of paint from any pile regardless of whether you have students there. The area control of the piles of paint is what’s important so you’ll want to carefully manipulate where your 12 students are placed. Spend a 1 or 2 and you may place a student from your board onto one of the paint piles. A die with a value of 3 allows you to move up to one of each other players’ students to other piles. 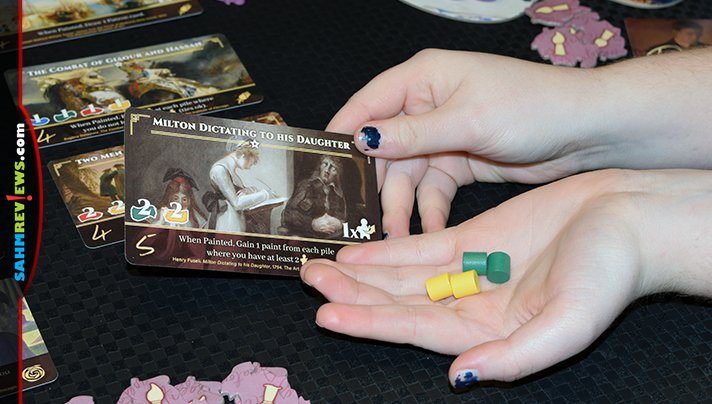 Remember when I said you must take one of two actions on your turn? If you’ve been lucky enough to roll a 1 (or 2), a 3 and a 4 then you may opt to use all three of those on your turn and move them to your board so they are out of the round. If you’ve also managed to roll a 5 then you may claim one of the seven available paintings. Pay attention because paintings with a star in the top center are Masterpieces that will count toward the end-game trigger. Here’s the thing… play moves around the table clockwise with each player selecting their actions then passing. As long as you have dice still in your active pool, you are still in the round and will repeat the process when it’s your turn again. If you’ve spent multiple dice in one turn then you’ll have less turns in a round than players who spend them one at a time. 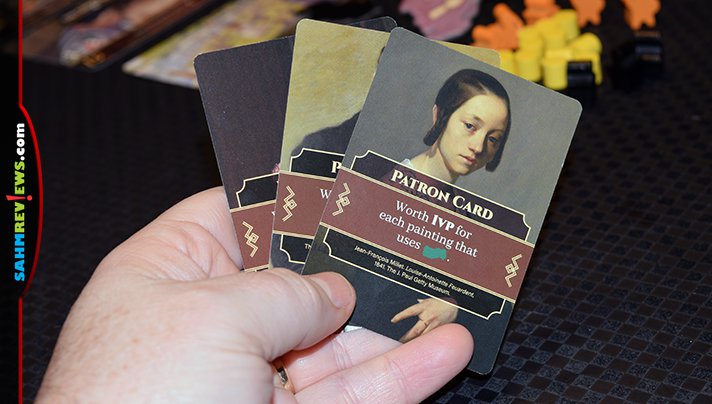 There are additional action options beyond the dice. You may use the powers on paintings you’ve already completed or you may spend Inspiration tokens. Before taking any actions for your turn, if you aren’t happy with the results of your roll then you may spend one Inspiration token to re-roll ALL your active dice. At any time during your turn you may spend two Inspiration tokens to take the Paint a Painting action instead of spending a “5” die to do so. Finally, you may draw a Patron card by spending 3 tokens. These cards provide additional end-game scoring by awarding victory points for things like unused paint, collecting a specific type or value of painting or incorporating a specific color in your paintings.

While it sounds like there is a lot happening in Atelier, it’s actually a very quick game to play, taking only 30-45 minutes. The fact that you can opt to play only one die or multiple on your turn allows you to potentially create useful combinations which helps speed things up. Despite the artistic theme, it’s actually very family-friendly. Young kids that grasp the concept of area control (for acquiring paint) will easily be able to play. Copies of Atelier board game are extremely affordable on Amazon and are also available direct from Alderac Entertainment Group. They are constantly crafting new games so visit AEG on Facebook and Twitter to see what else is their designers are releasing from their atelier.

What is your favorite category of painting?