We’ve mentioned a few times how we visited Las Vegas quite often when we lived in Los Angeles. We weren’t heavy gamblers, but did enjoy playing the low minimum tables downtown. We knew slots offered the worst odds, while blackjack and craps were among the best if played correctly. Back then you could still find a craps table or two during the day at one of the downtown casinos that only had a 25 cent minimum bet! You could play all day for twenty bucks!

The odds of any two-dice roll have been memorized for a long time. Eleven to one on a 4. Five to one on a 7. This knowledge has come in handy whenever we play dice games at home where the sum of two dice impacts the game. Games like Can’t Stop, Easy Money and Vegas Dice all were easier to learn and understand thanks to our minor gambling addiction. Up until now we hadn’t found a more complex hobby game that utilized a standard two dice roll. That search is complete with the discovery of Space Base by Alderac Entertainment Group! 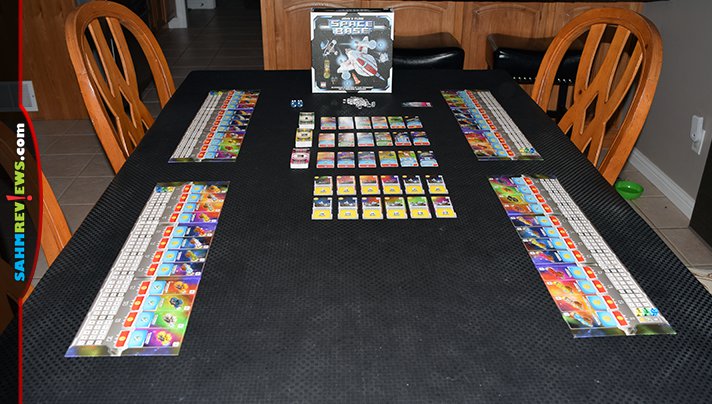 Before I talk about the dice, let’s find out what the theme of the game is other than being in space on a base. In Space Base, you and up to four other players take on the role of a Commodore of their own small fleet of spaceships. Each of these ships are docked at their stations waiting for their assignment and to make room for new ships being built. Some ships specialize in trade, providing you with ready funds to build. Others establish mines, which will add to your income. A few even provide transport to dignitaries which helps spread your influence! Influence is also the “victory points” for the game, so ultimately you will end up focusing on these.

Set up a game of Space Base by giving each player their own board and a deck of twelve cards of their chosen color. These are dealt out in order onto their board. A nice touch – their background matches up to the board exactly! Players also receive one of each color cube to use on their track and the other clear cubes are put within reach of all participants. 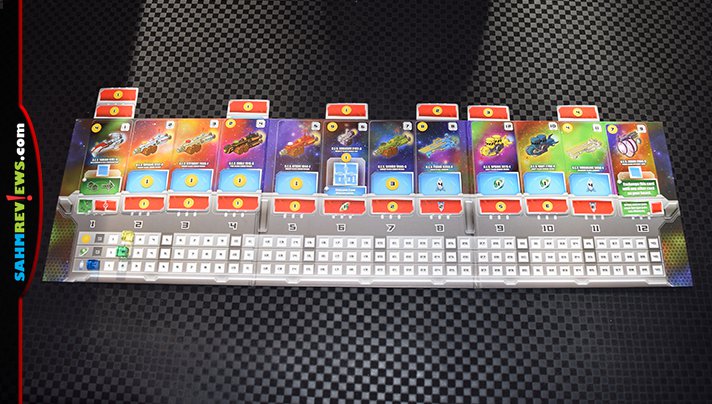 The three level of ship cards are shuffled independently and also set in the middle of the play area. Six cards are revealed from each deck and lined up, forming a market. Twelve colony cards are also dealt out face-up next to the ship cards and are available for anyone to purchase. All players begin with 5 credits, draw one level one ship card at random and reduce their credits by the cost of that particular ship. 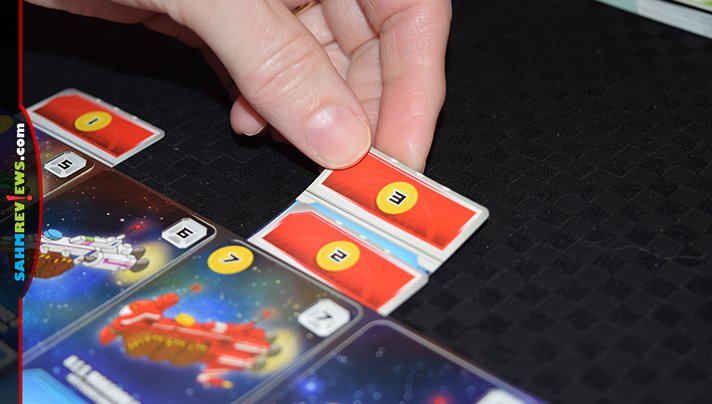 Any time a ship is purchased, whether at the beginning of the game or during, it is placed on the player’s board in the same manner. In the upper right corner is a sector number. The newly-purchased ship must be placed in that section, with the older ship being sent into space on a mission. Its card is turned 180 degrees and tucked under the board.

Turns in Space Base happen very quickly and all players will benefit from the dice roll. The active player rolls both dice and examines the result. They may activate sectors on their board for each die individually or as a sum total. This makes lower-numbered sectors easier to activate and higher-numbered ones less likely to go into play. Thus, those higher sectors have much more powerful abilities! 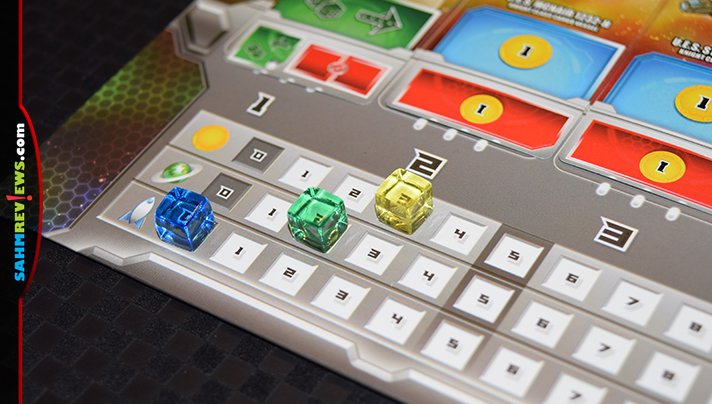 The active player will take whatever action is listed in the blue box on their card(s). This will include adding additional credits to your bank, increasing your income, earning victory points, taking bonus actions and more. All other players will activate either one or two sectors of their own and resolve the red boxes on any cards tucked under the board in the corresponding sectors. Not only do you want to roll well on your turn, you want other players to roll what you have ships deployed on! Just like craps where you want them to roll what you bet on!

After collecting your resources from the actions, you may purchase one ship or colony on your turn, as long as you have enough credits to afford the price listed in the upper left corner of the card. Interestingly, no matter the cost, you will spend ALL your credits to purchase the ship! The only way to save them from turn to turn is to pass on a purchase and add to your total during the next round.

Income is an area that is probably overlooked by most. At the end of your turn if the amount of credit you have is less than your income, you may move your cube up the track so that it matches the income. If you purchased a ship, you will be at zero – so think of it as a discount price that you will get back at the end of your turn. 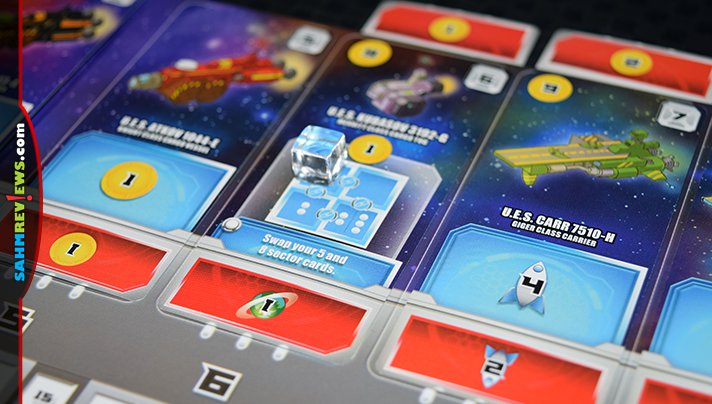 Some cards don’t allow you to take an action immediately. Instead you must power them up with charge tokens (clear cubes) when you activate that sector. The action is usually one that can be taken now or at a later time (even not on your turn) and is shown in a green box. Spend the charge tokens to take that action whenever you are ready. 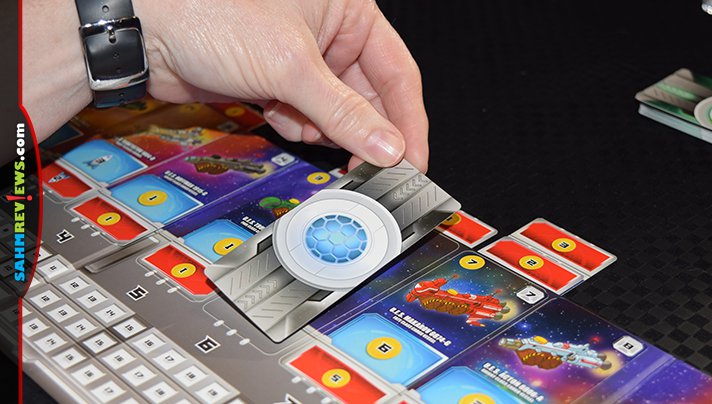 Instead of purchasing a ship, you may instead build a colony by purchasing one of the colony cards. These are bought and placed in the same manner as ships, but instead of awarding credits or income, instantly give you influence (victory points). Additionally, once you build a colony in a sector, you cannot put anything else in that area for the rest of the game. Visually, we found it convenient to turn the card over so we knew which ones were off limits to us on our turn. Of course, you can still activate that sector on an opponent’s turn since your deployed ships are still out there floating around! 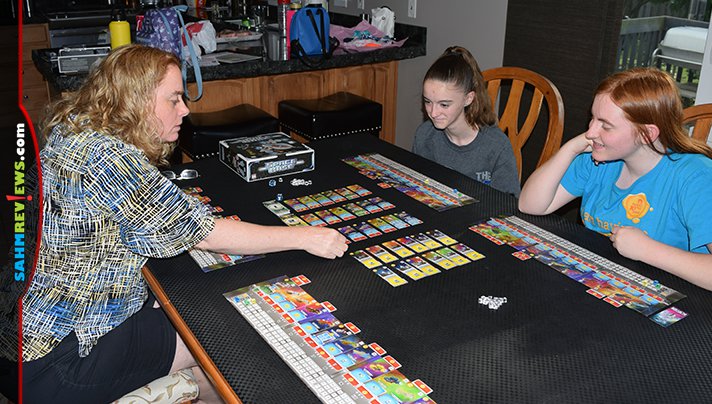 Players take turns in clockwise order rolling the dice and activating the blue boxes on their sectors while opponents collect for their red boxes. Once someone gets their influence token to 40 or above, it triggers the end of the game. Turns continue until the person to the right of the start player takes their turn, assuring all players have had an equal number of turns. Whomever has the highest influence at this point wins Space Base!

Because turns are resolved simultaneously, a game of Space Base can easily be completed in under an hour, even with the full compliment of five. While there are a lot of cards, it really is not as complex as it looks. In fact, this may become our go-to gateway game for new hobby game players since it uses the familiar gambling mechanic of a two dice roll. Plus we hear rumor of an expansion that might let you play with even more players!

You can find Space Base in AEG’s web store or at your local game store for under $40. Check out Alderac Entertainment Group’s website to find out exactly when the expansion will be released and fly over to their Facebook and Twitter feeds to see what else they’re debuting this convention season!

If you couldn’t tell how much we love Space Base by the above commentary, I’m going to reassure you about it right now. Space Base has become our go-to dice game, especially when trying to introduce new players to the world of hobby games. Most people our age have certainly played a game or two of craps, so the dice-rolling mechanic in this dice and card game is instantly familiar to them. We’ve lost count of how many copies our local board game store has sold based solely on our demonstrations and recommendations. 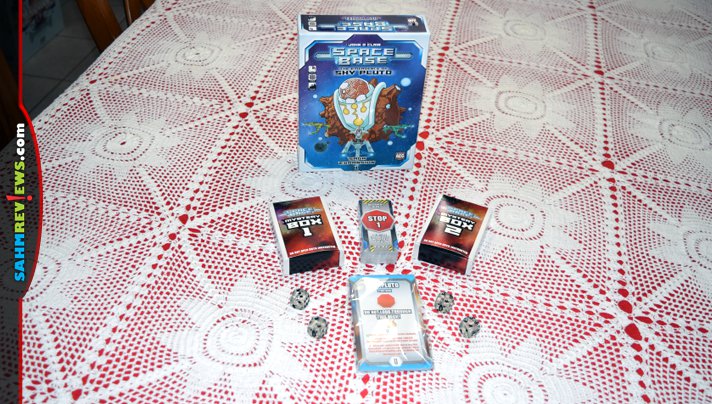 This past summer at the annual Gen Con convention, Alderac Entertainment Group release a follow-up expansion to this award-winning game that is different from any other game expansion we’ve seen. Instead of adding features to the existing game and leaving the game play the same, this one turns a game of Space Base into a legacy-style challenge that unlocks new rules and features a story line to help you immerse yourself in the experience. 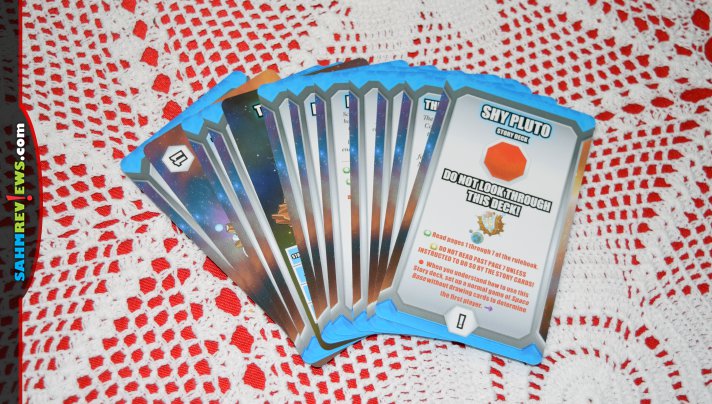 As with any escape room or legacy board game, it is next to impossible to explain in detail or show detailed photos of how this expansion augments your base copy of Space Base. What we can tell you is the box includes twelve story cards, two mystery boxes, four transparent glittered dice and a Discovery deck of 62 cards.

Each story card presents different rule changes, the addition of cards, altered setup parameters or bonuses that become a permanent part of the game once completed. As you play through the story line, it’s imperative you don’t peek at future story or Development cards. Instead, wait until the cards tell you to proceed to the next chapter. 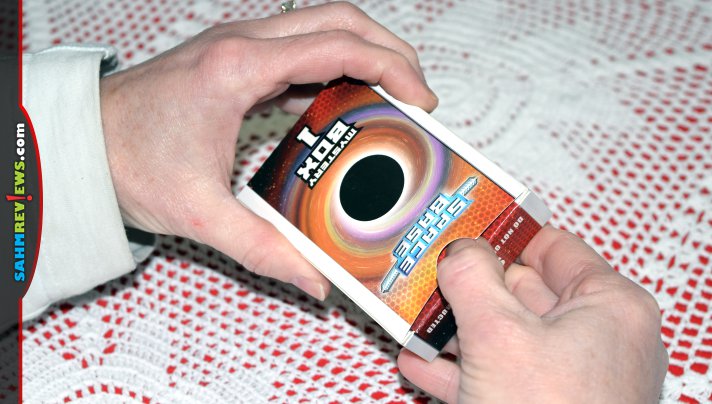 Once you work your way through all twelve stories, you can use most of the content as regular cards in the original game of Space Base. The game is branded as “Saga Expansion 1”, so we presume there will be more added in the future. We certainly are looking forward to that! Ask for this expansion at your favorite local game store or pick it up directly from AEG in their web store!

What is your go-to Vegas-like board or card game?