You might think our thrift stores are somehow magically filled with good board games. That certainly isn’t the case. We have to slog through multiple copies of Trivial Pursuit, Scene It and Mall Madness to find what we consider interesting. We’re always looking for those games that were published only one time. Maybe they remind us of one we had as a kid. Or maybe it was one we pined for and never got.

Rarely do we end up getting one that is really mass-market. This week was an exception when we picked up a copy of Ea$y Money by Milton Bradley. At first we thought it was the close cousin of Monopoly issued in the late 30’s. Then we spotted the “$” in the name, giving us a clue that it was something different. Upon inspection of the contents we instantly knew this was one we had never played! What caught our eye was the paper money. In itself, that isn’t unusual for games from the 80’s. It was the sheer amount of it included in the box! Piles and piles, all neatly wrapped into large denominations! 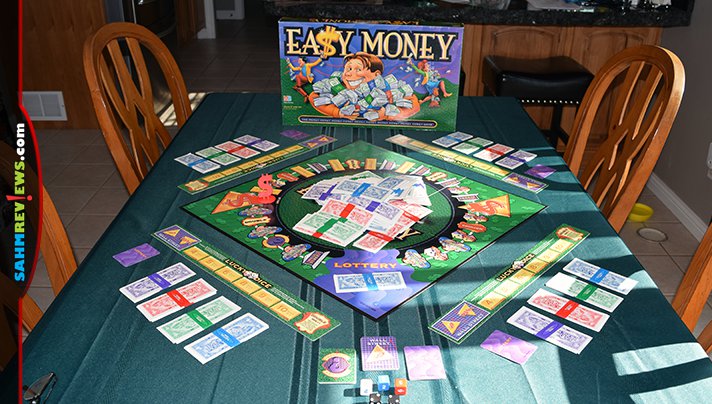 Setup is equally as unique – you take all the money and place it in a big pile in the center of the board! Three decks of cards are shuffled and put near the board and all players receive one of the Lottery Cards at random and a money board which are placed in front of them. 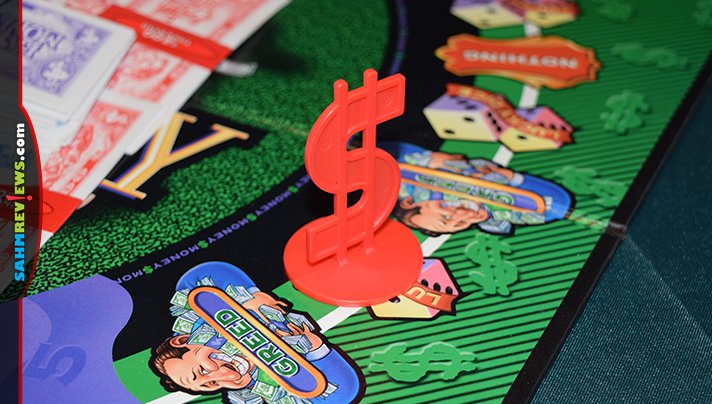 So far everything looks pretty unique. But the actual game play is the typical roll-and-move. On a turn a player will roll both black dice and move the money pawn clockwise around the board. Wherever it lands, they will follow the direction on that space. 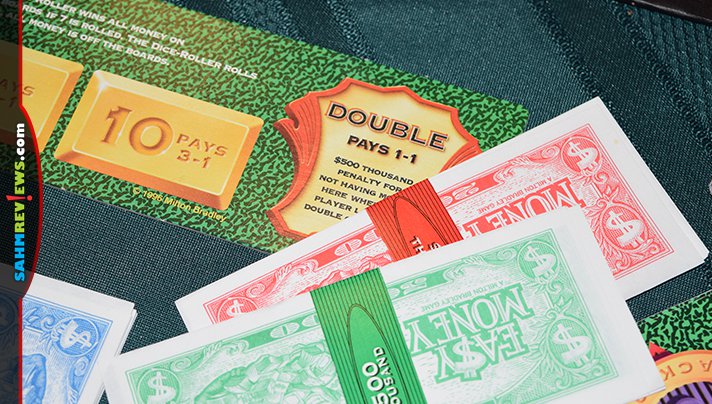 When the money pawn lands on the Double space, all players double the amount of money on their personal money board’s Money symbol. You can change the amount of money you have on a space any time before a player’s turn. But if you leave nothing there and someone lands on Double, you’ll pay a fee of $500k, which is placed on the Lottery space.

The Nothing space also affects the Double spot on your board. Any money wagered is lost and players who didn’t bet anything also lose $500k. Lesson here – always have something, even the smallest amount, on the Double space. Any time you move the money pawn past the Ea$y Money space on your turn, collect $1,000,000 from the pile. If you manage to land exactly on the Ea$y Money space, double that amount! 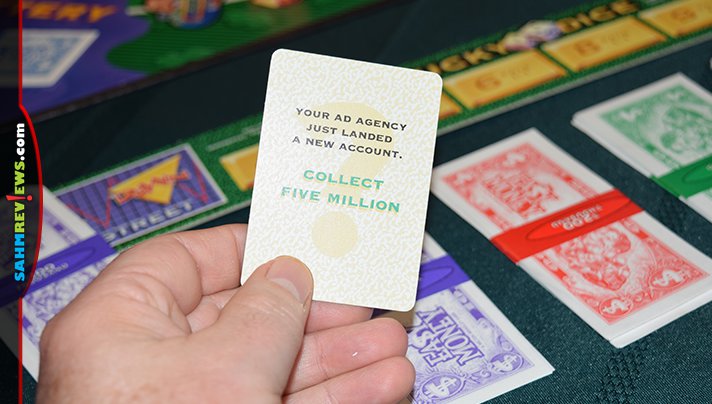 Landing on the Mystery Jackpot space allows you to draw one of the Mystery Jackpot cards and follow the directions on it. The Lottery space gives you an additional Lottery card from the deck. Now you get to hold a Lottery for all players! Roll the red, white and blue dice and call out the numbers. This 3-digit number is the winning lottery number and all players check the numbers on their tickets. If there is a match, the winner takes all the money on the Lottery space. 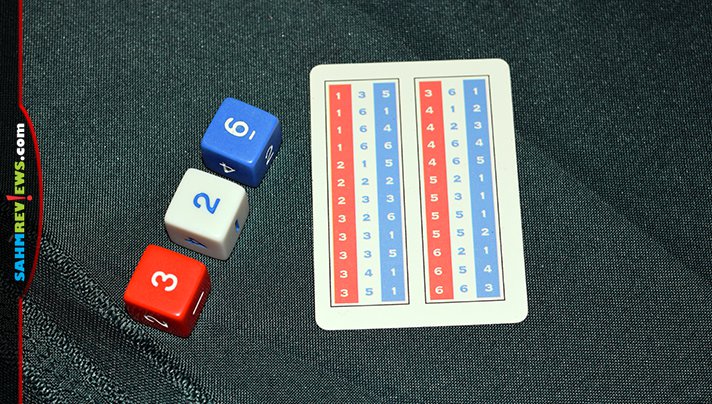 The Greed space allows you to steal money from another player. Choose an opponent and roll one black die. For every pip shown, you may steal $100k from their pile. Continue rolling and stealing from the same player until you roll a one. When that happens, they get all their money back! If you decide to stop rolling before getting a one, you keep everything you have stolen up to that point! 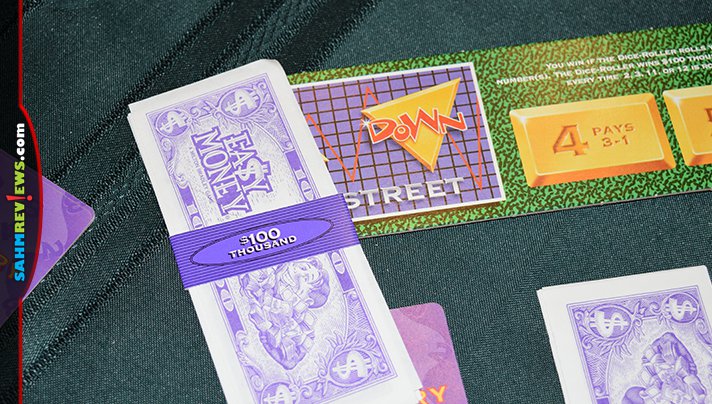 A Wall Street Space signals that it’s time for all players to play the Stock Market. The top card in the Wall Street Deck shows the market prediction on the back of the card. All players place one or two wads of cash of any value on either the Up or Down on their Money boards. After everyone has bet, turn over the card to see if the prediction was correct. If you correctly guess the market direction, take your winnings from the money pile. Otherwise, lose your investment to the Lottery pool. Most cards correctly match the market direction, but betting against the market prediction correctly pays off a higher amount! 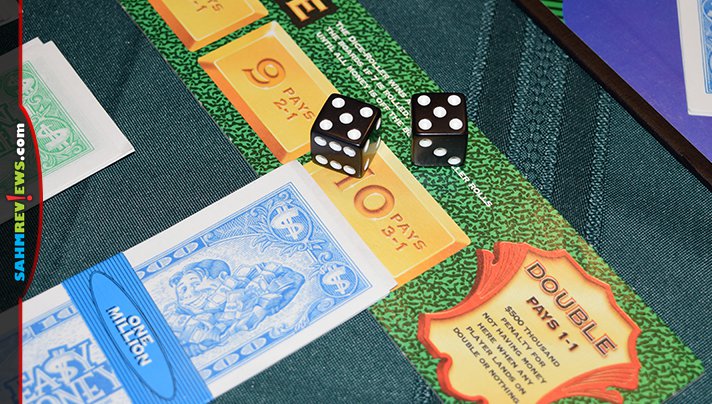 Lastly, the Lucky Dice space gives the active player the role of the Dice Roller. All other players bet money on numbers hoping you’ll roll them (think craps). Roll both black dice and add their total. If you roll a 4, 5, 6, 8, 9 or 10, anyone who bet on those numbers collects from the pile according to the odds and removes their money from that number. A 2, 3, 11 or 12 awards you with $100k. If you roll a 7, you collect all money left on the player boards and your turn ends!

When the money pile runs out, it is time to hold the Final Lottery! The active player rolls the red, white and blue dice according to the normal Lottery rules. If no one wins, everyone adds an additional $500k to the pool and another number is rolled. Once there is a winner, that person collects it all! The player with the highest total amount of cash is the winner of Ea$y Money!

It was a fun experience grabbing money out of a pile, but that’s probably the best part of the game. While there are different things to do thanks to the spaces, it was completely random. It could certainly use some updating to more modern mechanics to make it competitive in today’s market. It’s also not an easy one to find for sale. Obviously there aren’t any new on Amazon and only one copy for $45 on eBay at the time of writing! If you see a complete copy at thrift or a local yard sale, it’s probably worth picking up for a couple bucks just for the nostalgia factor!

What game do you have nostalgia for?