Have you ever noticed that Scott tends to go in phases? While his favorite games fall into a few categories including abstract games and anything from Stefan Feld or Reiner Knizia, he likes to find similar types of games and play them within a short period of time from each other. As an example, October included several games to play at Halloween. Lately, he has been showing the diversity of trick-taking card games available such as Anasi from Level 99 Games, Yokai Septet by Ninja Star Games and Mayday Games’ Cahoots.

Me? I have my game preferences also but today I’m going to (sort of) ride Scott’s coattails and share details about another (sort of) trick-taking game. Joraku from Tasty Minstrel Games is more than a variant of Spades or Hearts in that it incorporates a secondary game mechanism that is the primary method of scoring. Not only do you need to navigate the card hierarchy to win a hand, but you also need to focus on area control. This small Japanese-themed game has a lot of depth so let’s get started on the overview! 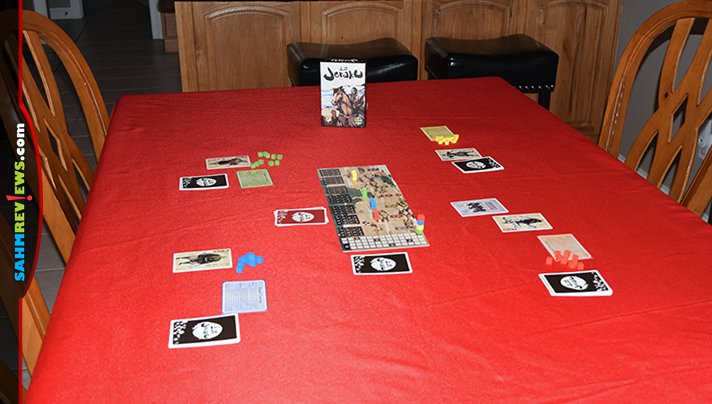 Three or four individuals can play Joraku. Each person selects a color then takes the Daimyo token, Samurai cubes and reference card in their preferred color. The board consists of several smaller boards that allow it to fit into a small box. They are assembled in numerical order and placed in the center of the table within reach of all players. The six Daimyo cards are shuffled and one is randomly dealt to each player. You’ll place your Daimyo token on the corresponding section on the board. The person with the highest number is given the Kachidoki card and will be the starting player for the first of three rounds. 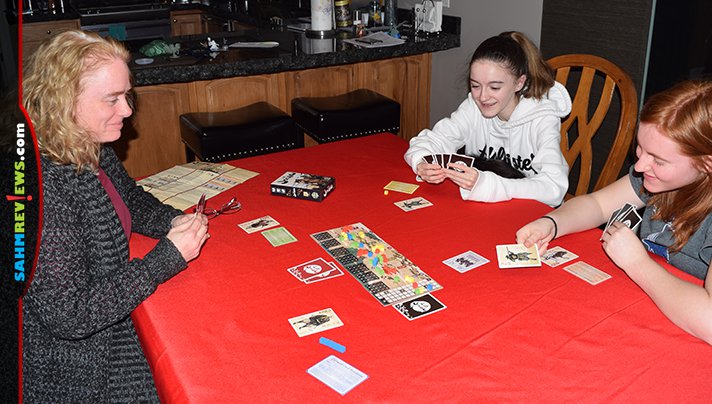 The game only consists of three rounds. Each round proceeds in the same fashion which includes a Recruit phase, a Skirmish Phase and the Prestige Phase. The Skirmish cards are shuffled and dealt either 6 or 5 cards depending on the number of players. You’ll look over the cards you’ve received and select two to pass to the player on your left. Once all players have their hand of recruits, it’s time to skirmish! 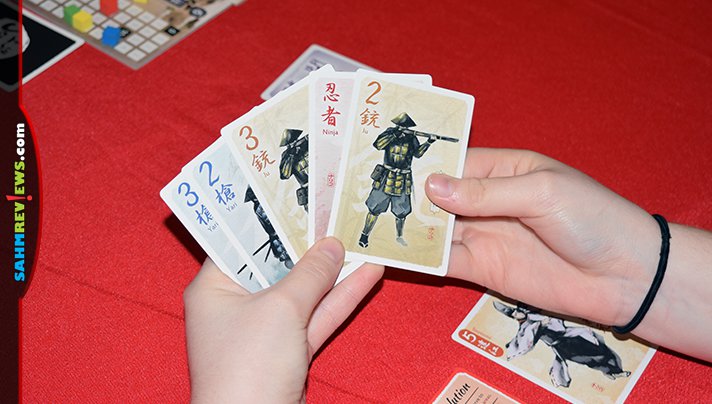 The goal of the game is to march on Kyoto, gain control of areas of the map and earn prestige as a result. There are two ways to do this. First, you’ll earn prestige by winning a skirmish then you’ll earn additional for controlling various parts of the map. The catch is that in order to control the map, you need to get your Samurai deployed. 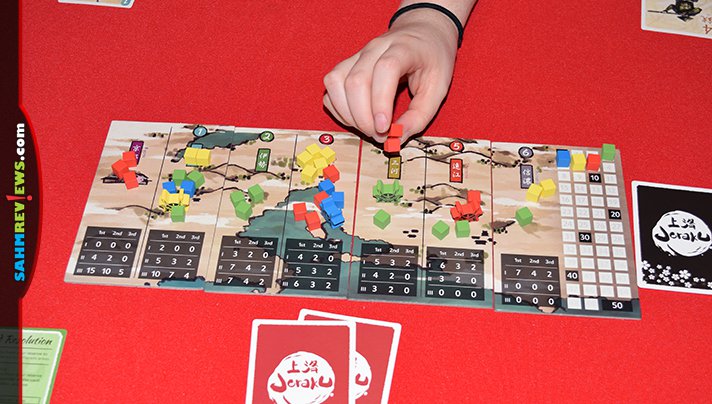 This is done through actions generated from the same cards that are used for trick-taking! There are three different suits of cards numbered 1-6 plus a Ninja card in each suit. The starting player plays a skirmish card of their choice then places Samurai tokens based on which card was played. 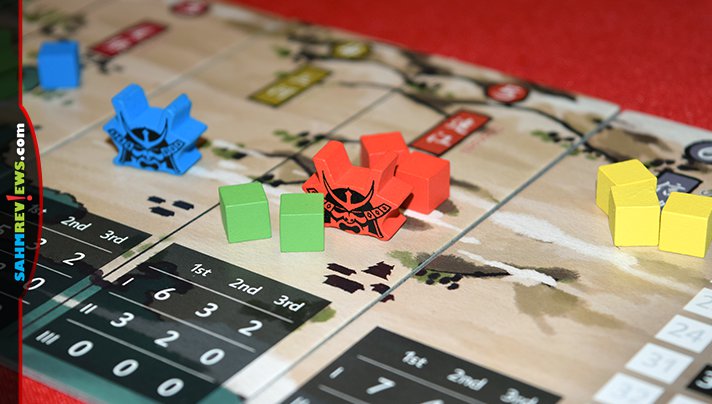 If you play a Ninja, you may place three Samurai anywhere on the map. If you play a numbered card, you can either play 0-3 tokens from your supply into one single area that matches the card number or you can spend action points to move your Daimyo, move one of your Samurai and/or remove someone else’s Samurai from the map. All future players must follow the lead suit if possible. Otherwise, they may play any card they wish. Once everyone has played, a winner for the trick (skirmish) is determined. 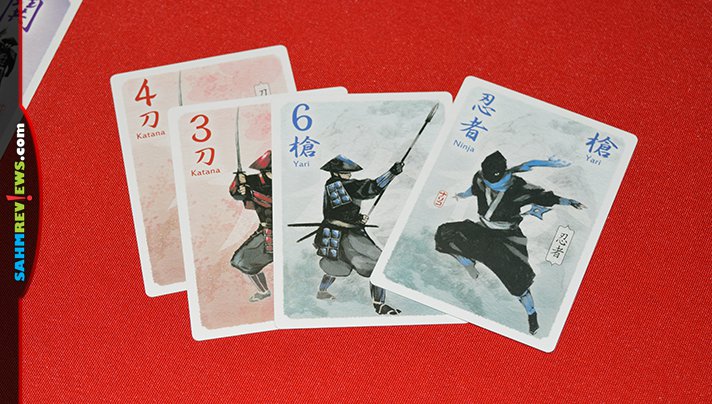 Now here’s where things get interesting. A ninja of any color is the most powerful, but only if a 6 has been played. If the ninja/6 combo doesn’t happen then the player who played the highest number wins. Unlike traditional trick-taking games, the suit doesn’t matter at this point. The winner takes the Kachidoki card and is the starting player for the next skirmish.

The Skirmish phase reputation points are now calculated. Players who have ninjas in the same area as the winner’s Daimyo token earn reputation. The skirmish process (selecting a card, utilizing the action then resolving the winner of the trick) is repeated until everyone has played all the cards in their hands with points being awarded at the end of each skirmish. 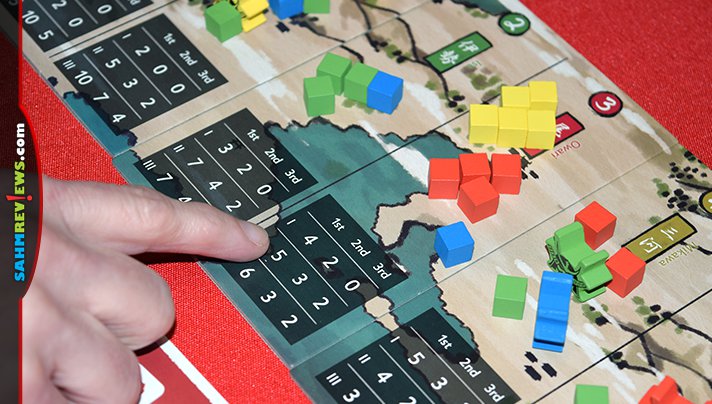 After all cards have been played, it’s time for the Prestige phase. This is where the area control comes into play. Starting with the area furthest from Kyoto, whichever player has the most influence earns the reputation noted on the scoring chart. When two players have the same, they tie for the rank below that. If all four players tie then nobody is awarded points. The process continues to area 5 then 4 and so on. As previously mentioned, a game consists of three rounds so you’ll repeat the entire process starting with the recruitment phase. 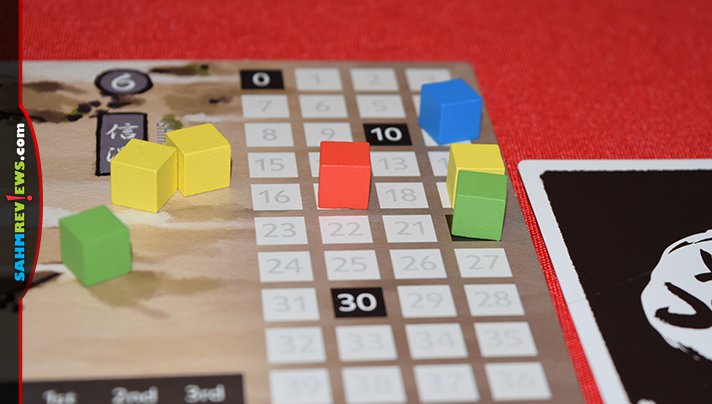 When you play a lot of similar-style games, it’s interesting to see the differences. The inclusion of the area control aspect of Joraku makes it very different from the others in the genre while still being approachable by people who are used to traditional trick-taking games. The small packaging makes it an excellent option for travel so throw it in the bag when you travel to visit family and friends! Copies of Joraku are available on Amazon as well as on Tasty Minstrel Games’ website. You can also check with your local games store to see if they have copies. If you are a fan of Ponzi Scheme game, check out the Kickstarter for Dragon’s Interest. We saw it at Geekway and can’t wait to learn more about it. We’re always excited to see new games from Tasty Minstrel on display at game conventions. If you can’t make it to any of the conventions, keep an eye on Twitter and Facebook for details!

What is your favorite trick-taking game?

2 thoughts on “Joraku Board Game Overview”