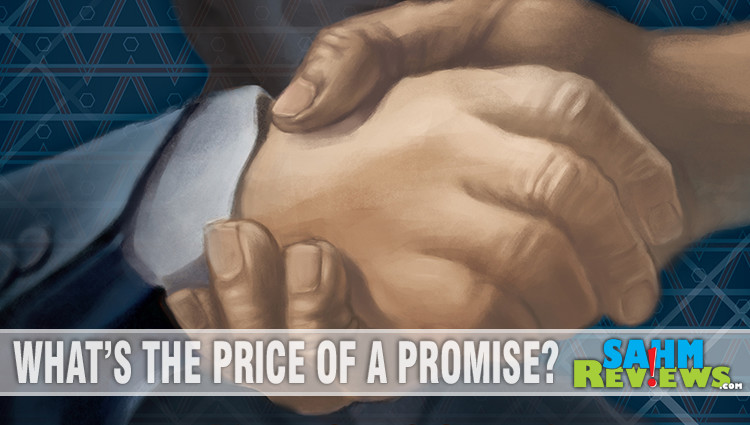 If I had to pick one game type that I usually do pretty well at, it would be games that fall into the category of “economic games”. My background is in finance, and quickly figuring out which investment is better has always come naturally to me. I have yet to lose a game of Stockpile, a stock-picking game we talked about nearly two years ago. Even when I was much younger and playing a game of Monopoly with the family, in my mind it was just a numbers game – which property yielded the best ROI or stood the best chance of being upgraded to a hotel? Hint – it’s not always the most expensive!

Economic games have always had a place in the gaming industry. The 1970’s saw a number of bookshelf games that were little more than spreadsheets in a game box. And the rise of popular railroad-themed games was also fueled by the stock-picking component that accompanied the need to build the best rail route (we’ll be covering one of these very soon). But this week we played a few rounds of a newer title by Tasty Minstrel Games that turns the table on the entire genre – Ponzi Scheme. 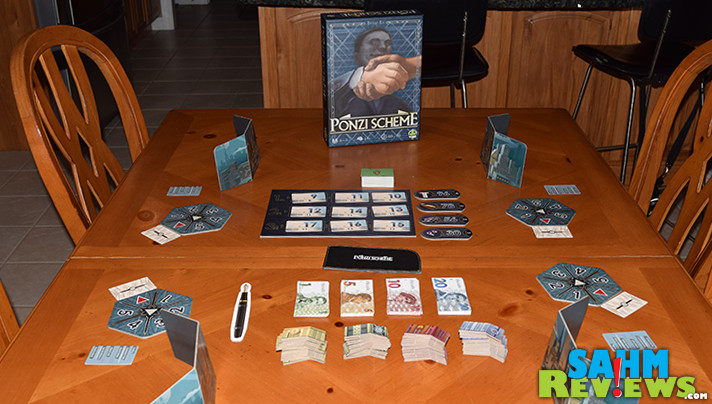 What typically occurs in an economic game is players will buy stocks/bonds at specific times, hoping their choices will have the highest value at the end of the game. The values of the underlying securities move due to player actions, so predicting how your opponents will play becomes critical to the success of your portfolio. That’s what normally happens. Not so in Ponzi Scheme.

If you’re not familiar with the Ponzi Scheme term, it is a fraudulent investment operation where the operator generates returns for older investors through revenue paid by new investors, rather than from legitimate business activities. Operators of Ponzi schemes can be either individuals or corporations, and grab the attention of new investors by offering short-term returns that are either abnormally high or unusually consistent.(wikipedia) 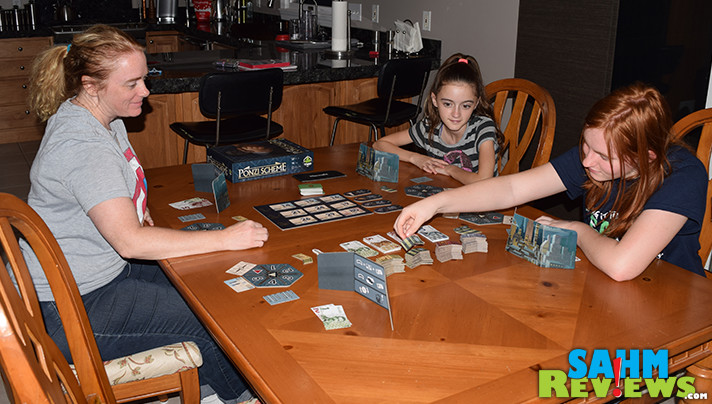 Instead of being the player with the best portfolio, in Ponzi Scheme you are simply trying to outlast your opponents by not going bankrupt! Each of you are operating your own pyramid, taking on investors with the promise of high returns at a later time. There’s a unique end game trigger – you play until one player loses all their money. This signifies the end of the game and the person who has built the largest shell corporation is the overall winner. So how is this accomplished? 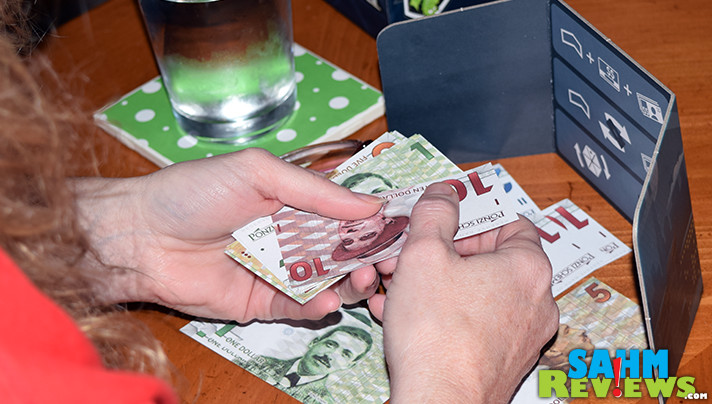 Ponzi Scheme isn’t very difficult to learn. But it’s one of those games that you’ll need to play a couple times before the underlying mechanics start to make sense. Each player begins the game with a player screen (to hide their money), a time wheel and marker, but no money at all! On each turn you will select from one of the nine available funds on the Funding Board. 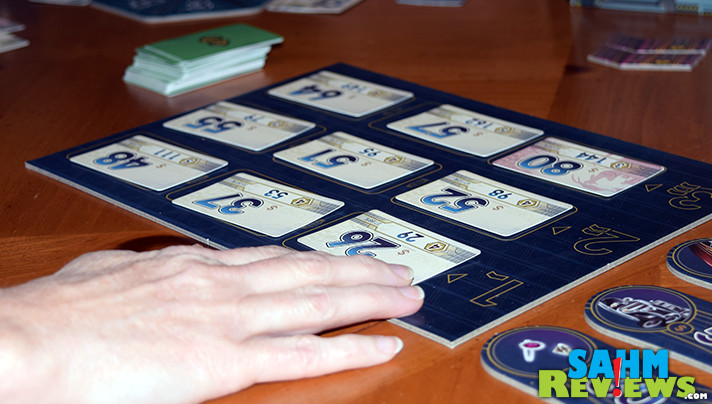 Which row you select from is determined by the industry you have chosen for this round. You’ll gain the amount shown on the card right away (this is your clients’ investments), but have to pay the amount on the bottom of the card as a dividend once the Time Wheel turns towards it. 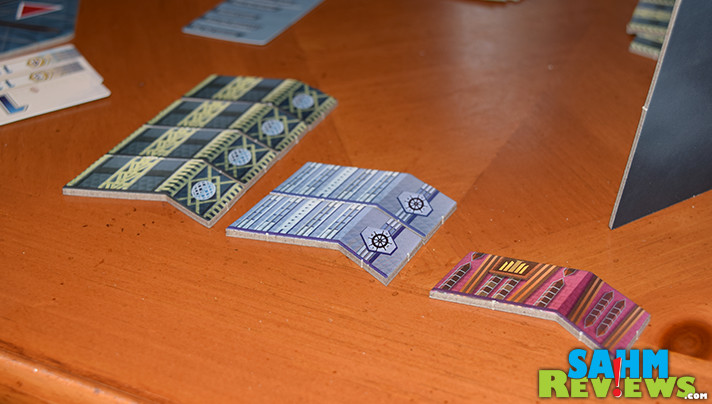 Each turn you also get to select one of aforementioned Industry Tiles. These tiles represent where your fund is invested, but in actuality are nothing more than shell corporations. Collecting them and increasing the overall size of each industry is about the only thing you can do to score points. However, during each turn players can offer to purchase a piece of your corporation by making a cash tender, hidden in the included wallet.

If you accept the offer, you keep the cash and pass the tile to the other player. If you think their offer is too low, you can purchase theirs for the same price! This makes for an interesting bidding process, and makes clear the need to hide your money so others don’t know how deep your pockets are (or aren’t). 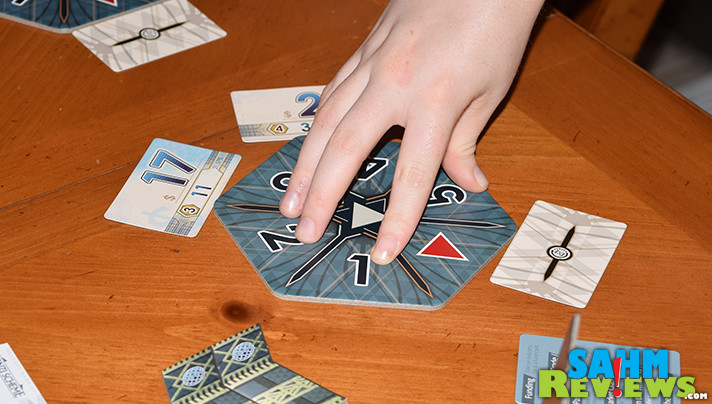 After each round, the Time Wheel is turned and any dividends due must be paid immediately. If there are four Bear Market cards on the Funding Board (special red-tinted cards), then a market crash occurs and the wheel is turned twice (with dividends due at both spots). Any player that doesn’t have enough cash on hand to pay their dividends goes bankrupt, ending the game immediately! 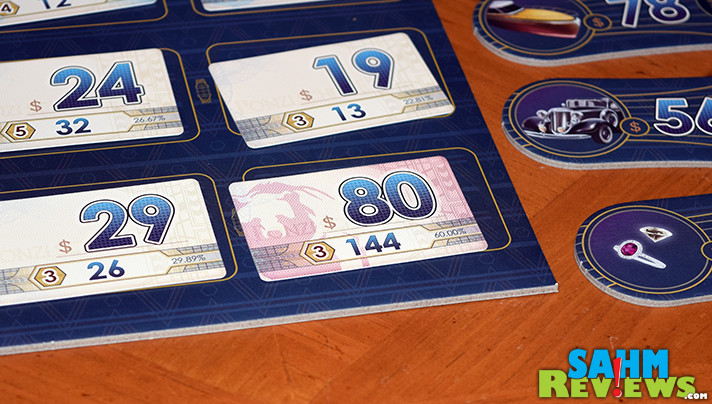 As I mentioned earlier, at first glance there doesn’t seem to be much going on in Ponzi Scheme, but once you get playing and see how difficult it is to “keep your head above water”, you’ll appreciate the complexity. If you’ve ever juggled credit cards, passing the balance from one provider to another, you’ll probably be an expert at this game in no time! Ponzi Scheme is less a game about winning, and more about trying to lose the least!

If you like any type of economic games, or are looking for a title that will teach your children a little bit about how the world works, you should consider having a copy of Ponzi Scheme in your library. Be sure to give it a couple run-throughs, I guarantee you’ll appreciate it more after a few plays.

At around $40 on Amazon, it’s a cheap financial lesson disguised as a pretty good game. Be sure to check out Tasty Minstrel Games’ newly redesigned website, with a brand new store being added shortly! If you haven’t already, follow them on Facebook and Twitter – they’ve got some real exciting titles in the works!

Do you enjoy games that also teach in the process?