Last Monday we introduced you to a stunning trick-taking card game called Yokai Septet. If you missed it, Yokai Septet is a unique variation on the classic trick-taking genre best known for Hearts and Spades. Instead of a standard four-suited deck, it utilized seven different suits all with different number series. And it wasn’t just about winning a trick – you had to win a trick with a certain numbered card in it! A very unique take on this well known style!

This week we’re playing another new entry into the genre, Anansi and the Box of Stories by Level 99 Games. Based upon the West African foiktake, you might be wondering why we grabbed another similar title to last week’s. While we love almost all games, this one offered something a little different and kid-friendlier artwork that made it impossible to pass on. 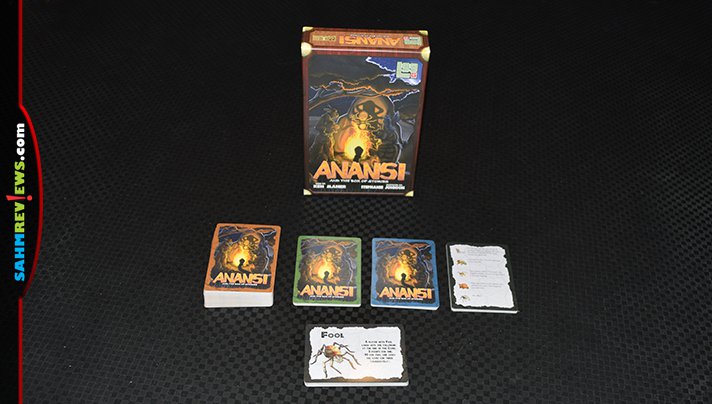 Anansi also doesn’t have the standard four suits of cards. This game employs six, all based upon a character trait (Bravery, Strength, Arrogance, Friendliness, Craftiness or Jealousy). Each suit also contains nine different animal types (chameleon, hornet, monkey, leopard, mouse, hare, snake, turtle and anansi, a spider in the west African Akan language). Nine role cards match the animal types and give each player (up to eight) a special power to be used once per round. 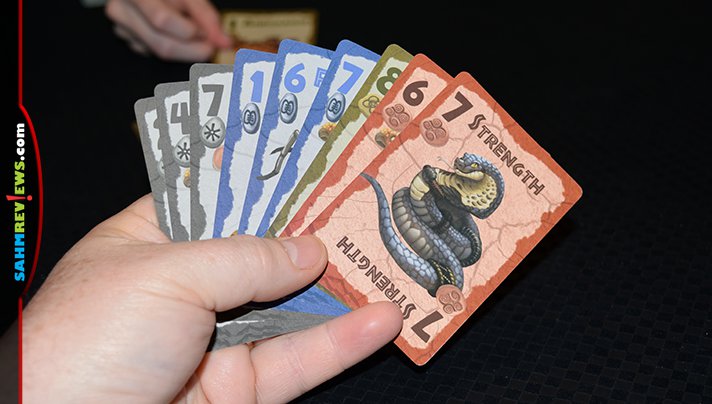 The entire deck of 56 cards (there are two wild cards) is dealt out evenly to all players and any extra are put aside and not used for this round. Role cards are dealt out face-up equal to the number of players plus one and everyone takes a turn choosing one. A game of Anansi is ready to begin. 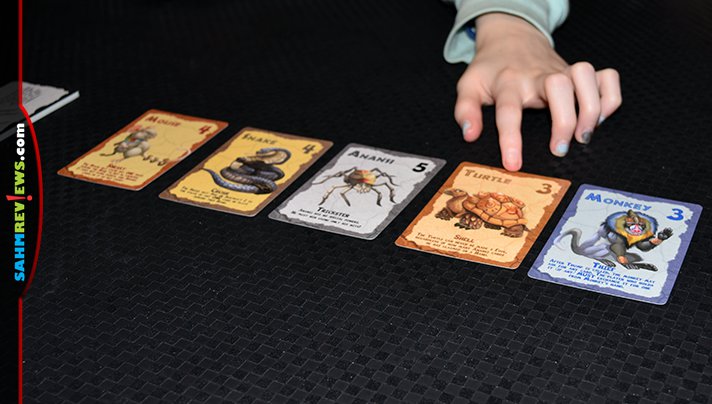 Like any trick-taking game, each player, beginning with the start player, plays one card face-up to the table. After the first, subsequent players must follow suit if they have one in their hand. If not, they may play any other suit, including the trump suit. In Anansi, the trump suit is set at the beginning of the round by the player possessing the Leopard role. If the leopard wasn’t available as a role, the default trump suit is “Craftiness”. 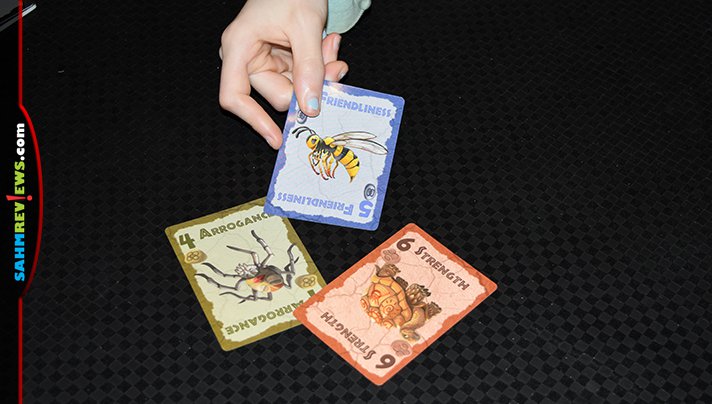 Each trick’s winner is determined in the typical fashion – highest card of the trump suit wins. If none exist, highest card of the lead suit takes the trick. Uniquely, it is possible to have a tie in Anansi if special abilities are used or wild cards are in play. In this case the trick is awarded to the next highest-numbered lead card played. If still tied, no one wins it! 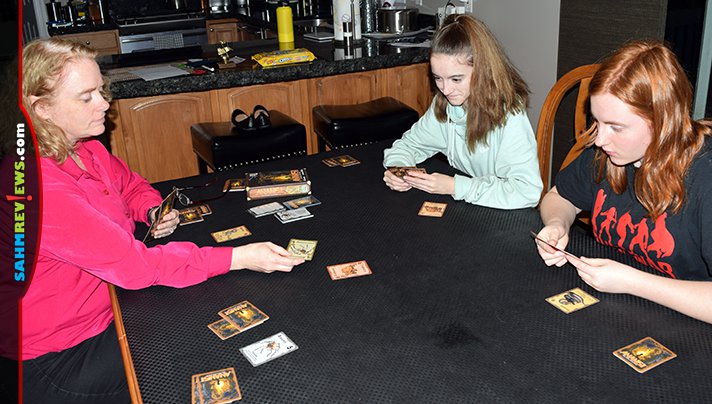 The winner of the trick leads the next one and the game continues in this manner until everyone has one card left in their hand. This isn’t played for a final trick – instead, it is saved for the next round! This means you have to consider which card you want to hold on to for use later! And remember how in Yokai Septet you wanted to capture the Yokai (card #7)? In Anansi, each suit has a spider (anansi) and you DON’T want to have that in your trick! At the end of the round the player with the highest totaled value of anansi cards in their tricks is labeled the “Fool” and receives a Fool card. This will subtract five points from your end-game total, and if you are unlucky enough to collect three of them, it ends the game immediately with you being out regardless of your final score! 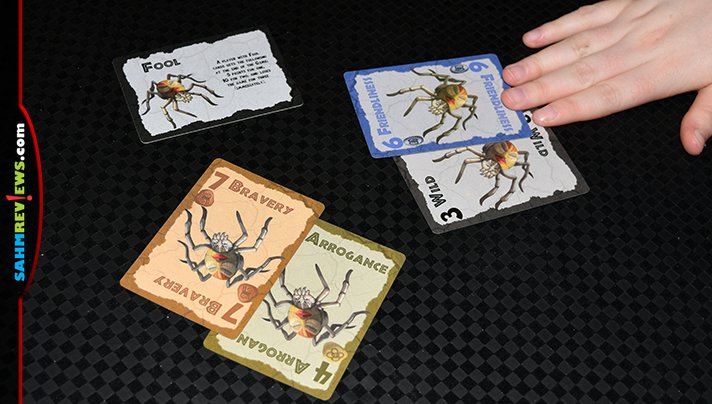 Every Role card also has a number in the upper right corner. This is your scoring number, which you will multiply by the number of tricks you captured to determine your round score. Scores are recorded on a piece of paper (not included) and all cards are collected, except for the one card leftover in each person’s hand. Roles and Animal cards are reshuffled and dealt out in the same manner to begin a new round. A game of Anansi lasts for five rounds or until someone has become the Fool three times, whichever comes first. The previous round’s Fool becomes the lead player for the start of the next round! 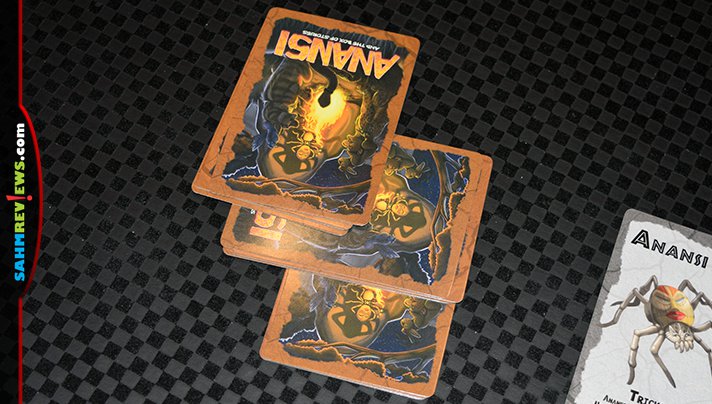 Sum up the scores for each remaining player at the end of the game, remembering to subtract five points for each Fool card in their possession. The player with the highest overall total wins Anansi! In the event of a tie, the person with the fewest Fool cards among the tied players is crowned the winner. If still tied, then both players win!

Both Yokai Septet and Anansi and the Box of Stories offer something very new to the world of trick-taking games. Anansi’s art will appeal to a wider age range and there’s something gratifying about sticking another player with an icky spider. Copies are readily available on Amazon or at your favorite local game store.

Anansi is a very different game than some of Level 99’s other titles (I Can’t Even with These Monsters, Sellswords Olympus, Temporal Odyssey) which gives you a clue into the breadth of their offerings. Check out their current lineup on their website and follow them on Facebook or Twitter to see what’s coming out this summer!

Are you afraid of spiders?