It’s that time of year again! The holidays are just around the corner and will be upon us before we know it. Last year we heard a lot of feedback about our holiday gift guides and corresponding giveaways so we decided to do it again this year but even bigger! As with last year, each guide will carry a theme providing suggestions for gift ideas for various individuals on your list.

As you know from reading our site, we love games and incorporate game night (or game day) whenever possible. So it seems only fitting that we launch this year’s extravaganza with our first gift guide focusing on games for the family. This list of games covers a variety of themes targeting different age ranges so hopefully you’ll find something that will inspire your crew to set aside time to play games.

Over the next few weeks we will publish guides with games, toys, home items, electronics and more. If you see the

logo, click on it to be directed to an in-depth review! 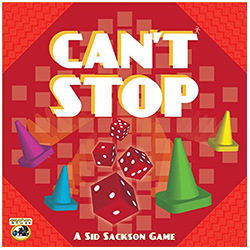 Can’t Stop is the ultimate press-your-luck board game. Once you’ve started this intense dice game, you just can’t stop! Players try to win three of the eleven number columns as quickly as possible. You’ll go for the dice again and again only to risk losing it all on a single roll. Everybody likes to try just once more, and then maybe once more. They CAN’T STOP! CAN YOU? 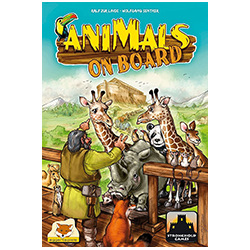 You have an ark and want to take as many animals on board as you can. Unfortunately, a guy called Noah has obtained an anti-pairing law and at the end of the game, pairs must be handed off to him.
However, you can circumvent the law if you three, four or even five of a species. These herds and are not only permitted, but are valuable. The problem: You can’t form a herd, without a pair first…

Will you win by having the most valuable Animals On Board? 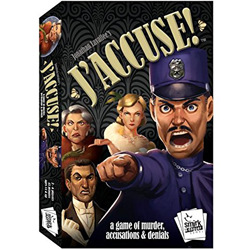 J’ACCUSE! is about implicating and accusing your friends and family of MURDER! The object is to avoid suspicion for as long as you can, while assuring that someone else ends up accused for the crime. The game ends when one player gets stuck with at least one of each type of Evidence (a Motive, Opportunity & Weapon, which solves the case) OR by having ANY 5 pieces of Hard Evidence against them. One loser and a table full of winners who got away with MURDER. 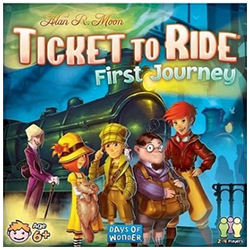 Easy to learn and quick to play, Ticket to Ride: First Journey is the perfect introduction to the Ticket to Ride series. Players collect train cards, claim routes on the map, and try to connect the cities shown on their tickets to achieve victory. So climb aboard and embark on your very own North American railway adventure!

Build routes while seeing major monuments throughout North America – fun for all ages! 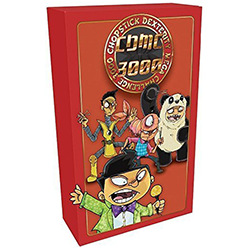 CDMC 3000 is a dexterity game in which each round a contestant reveals a Disk and announces what it is. Every contestant using only their chopsticks (and a little skill) grab the wooden shape(s) from the bowl and returns it to his Dish before the other contestants wins that Disk. The first contestant to win the target number of Disk wins the game. 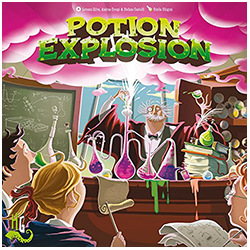 It’s senior year at the Horribilorum Sorcery Academy for Witty Witches and Wizards, and it comes down to this: the final exams! In Potion Explosion, players collect ingredients from the unique slide dispenser, choosing carefully as they pull out supplies such as Dragon Smoke and Fairy Dandruff. Players may even be able to cause ingredients to collide and set off a chain reaction, allowing them to grab huge numbers of ingredients on a single turn. This will be critical in the completion of potions like The Elixir of Blind Love or The Balm of Uttermost Stickiness. It will require all of the magical craftiness that the players possess to graduate head of the class!

Best of the Worst 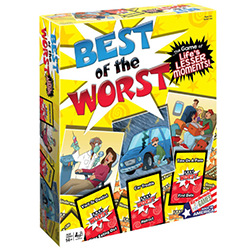 Ever had a first date that was an absolute nightmare? Teeth still vibrating from your visit to the dentist with the shaky hands? For all those outrageous incidents in life that left you uttering “Someday I’ll look back at this and laugh”, today is your lucky day! Best of the Worst revisits life’s lesser moments with clarity and hilarity. See how far you can stretch the truth before it breaks…into laughter! Contents: 1 Card Deck including 88 “Your Worst” Cards (176 different scenarios), 8 True Story Cards, 8 Bogus Story Cards, 8 Voting Cards, 8 Hat Cards, 8 Pawns, 1 Game Board, and Instructions. For 3-8 players. Ages 14 and up. 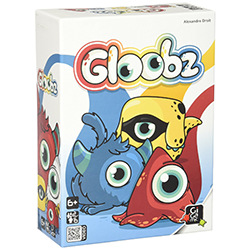 You have to get your hands on Gloobz! One player calls out “More Gloobz” or “Less Gloobz” before flipping a card. Players scramble to grab the correct pieces in order to score points. When the Mega Gloobz or Magnifying Glass appear, the rules change! Can you grab the Gloobz before they get away? 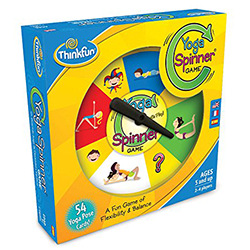 Simultaneously stimulate and calm the mind while encouraging teamwork and physical activity. Yoga Spinner players give the spinner a whirl, choose the corresponding card, and perform the pose pictured to win the pose card. To win the game, players need to collect a card from each of the four categories of yoga poses. Yoga Spinner was recently the recipient of an Oppenheim Toy Portfolio Award and a National Parenting Product Award (NAPPA). Available on Amazon, Target and neighborhood toy stores. 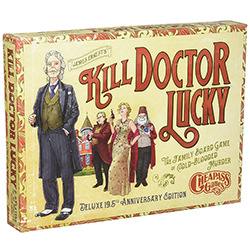 Welcome to Lucky Mansion, a sprawling country estate filled with unusual weapons, good hiding places, and craven killers. Killers like you. The object? To kill Doctor Lucky. The obstacles? For one thing, all your friends would rather do it first. For another, Doctor Lucky is aptly named.

You would think that after being stabbed, poisoned, and poked in the eye, the old man would be long gone. But it’s been nearly 20 years since folks first started trying to kill him, and he keeps coming back stronger than ever. 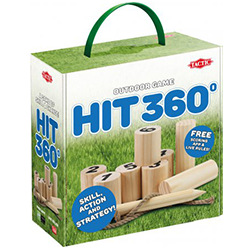 Hit 360° is a fun outdoor throwing game, in which players try to hit the numbered skittles in correct order. The included center stake and measuring string provide a unique element of a 360 degree playing field so that players can toss from any direction. If you can knock the right skittle out of the string’s reach, you win it. 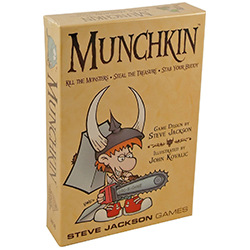 Go down in the dungeon. Kill everything you meet. Backstab your friends and steal their stuff. Grab the treasure and run.

Munchkin is the mega-hit card game about dungeon adventure . . . with none of that stupid roleplaying stuff. You and your friends compete to kill monsters and grab magic items. Don the Kneepads of Allure and the Boots of Butt-Kicking to slaughter the Potted Plant all the way up to the Plutonium Dragon . . . It’s a hilarious good time for three to six players. Ages 10 and up. One to two hours.

If you’re looking for games for the family (or for friends!), this list of Family Games (part 1) should help you fill your list. Again, Look for the tiny

logo on titles that we’ve previously given a full preview. Tune in this afternoon as we launch our first in a long series of 100+ Days of Giveaways. A lot of exciting things on the horizon so come back daily so you don’t miss out! 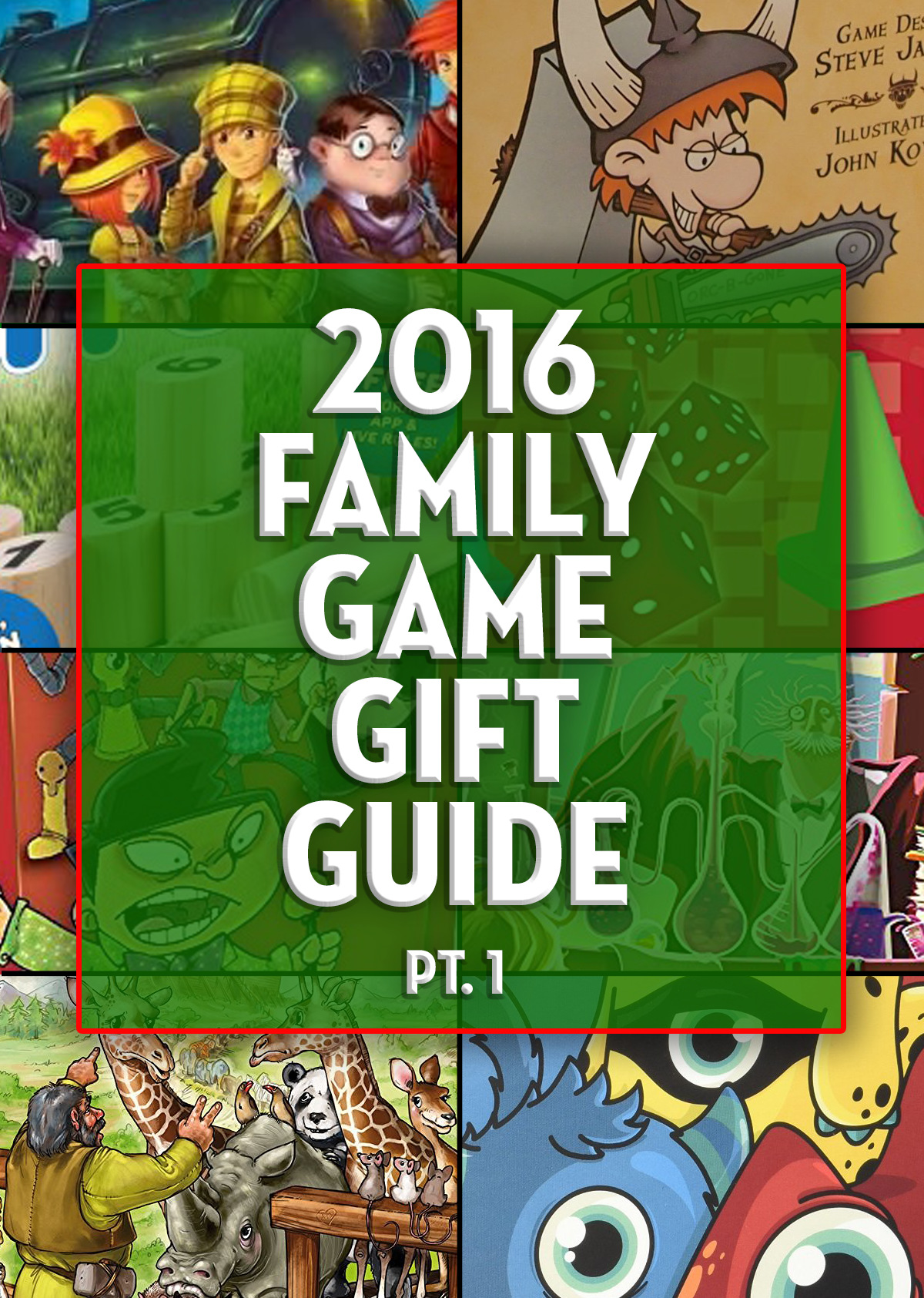