We kicked off our 2016 gift guides with a games for the family because, let’s face it, we put a strong emphasis on family bonding over board games. We had so many choices from a variety of publishers covering different themes and game styles that we couldn’t fit them all on one list. Well, I guess we could have but it would have been a pretty long and overwhelming list. So just like last year, we divided our family games guide into part 1 and part 2.

So make plans in 2017 to spend more time with games with family, friends, neighbors, coworkers and total strangers. Games teach valuable lessons and are fun! They are also often easier to fit into the schedule than family dinner, which has long been touted as the best opportunity for family bonding. Check out these games as well as the other gift guides for gift ideas for just about everyone on your list.

Need more information than the description and picture? Click the

logo to read more about how a game fit into our family or game night and more details on how to play. 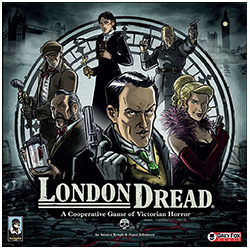 London Dread is a co-operative game set in Victorian England. Players take on the role of investigators trying to uncover plots on the way to confronting a story specific finale. The game is broken into a series of stories, in which players alternately participate in a timed planning phase where various obstacles and plots are uncovered and then an untimed execution phase where players resolve the effects of their planning. The result is a tense and truly cooperative experience where players must work together, communicate well, plan effectively, and use the strengths of their investigators in an attempt to stay a step ahead on the mean streets of the city.. 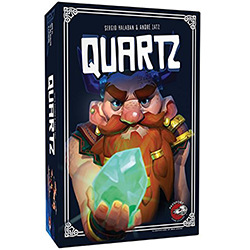 A push-your-luck board game for 3-5 players labeled as ages 14+ but playable by younger with explanation of instructions by an adult. You and your friends take on the role of greedy, greedy, Dwarves who have discovered a mine brimming with rare, valuable crystals- so how about a wager? Whoever earns the most money after a week of mining for crystals will get to claim the mine for themselves. But be careful: your friends may not have your best interests in mind, and it may be difficult to find the truly valuable gems mixed among the chaff… How deep will you delve to win? 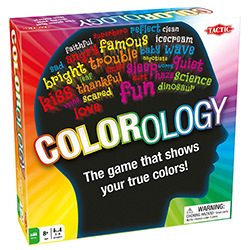 When you hear the word frozen do you think of the color blue, white or grey? Is Christmas red, white, or green? How does the color you think of change if words are combined, such as frozen Christmas? This is Colorology, the new game from Tactic Games. To play, each player takes a turn as the COLORologist and draws a word card and chooses the color that they think best describes the word. How many of the other players will choose the same color for the word? Any player that matches the same color as the COLORologist moves forward one space. The first player to reach the finish space wins the game. 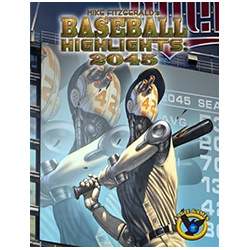 Playing Baseball Highlights: 2045 is like watching TV highlights of early 21st-century baseball games. In this quick and interactive game, two players build their teams as they play, combining both strategy (building your team) and tactics (playing the game) without any of the downtime. During each “mini-game”, each player alternates playing six cards to simulate a full game’s highlights. Do you try to thwart your opponent’s pending hits, put up strong offensive action of your own, or use your better players to do both? Players buy new free agents after each mini-game to improve their roster, and the team who wins the most mini-games in the series is the champ!

Hashtag Me! is the game of storytelling and social wisecracks that will keep you in #stitches! Everyone has cool stories to tell. Time to dust off the memories and share with your friends. And that’s when the fun begins. As the storyteller tells their story, the other players toss in commentary with their hashtag cards. Can you #HandleIt? Try to stay #focused through the belly laughter with this hilarious party game! 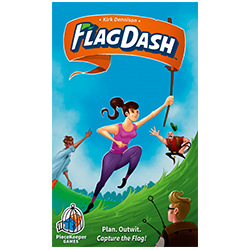 In Flag Dash, you play as one of several childhood friends who promised to play their favorite pastime again after they “grew up.” Secretly plan your moves to outmaneuver the opposing team in an exciting game of capture the flag! Will your opponents ruin your plans, or will you return home victoriously with the flag? Choose from 6 fun characters with unique player powers including the Wanna-be Ninja, Modern Cowboy, & Crazy Cat Lady!
– Family friendly board game of capture the flag
– Tactical planning, guessing, and teamwork
– Simple to learn but great depth of gameplay 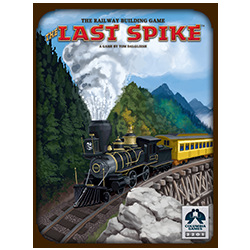 In this Mensa-Award winning game, players cooperate to build a continuous railway from St. Louis to Sacramento. Different routes are possible and some towns never get a railway link. Each player also competes to accumulate the most money from land speculation before the “last spike” is played. Quick to learn and great for both adults and children. 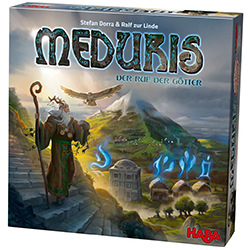 Following the call of the gods, your people strike out to settle at the foot of Mount Meduris, the mountain dedicated to the most important of the Celtic gods. It has fertile soil and raw material awaiting brave settlers, fields full of juicy grass for your sheep, quarries, mines, and dense forests. The area at the foot of the mountain is divided into nine districts, whose rune stones indicate the worship of various gods. As chosen ones, it is your task to develop the settlements and delight the gods. Only a player who obtains enough materials, cleverly selects the site of their huts and temples, and gains the mercy of the gods will be selected as leader of the tribe. 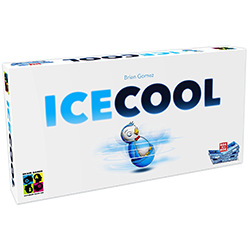 Ice Cool is the first flicking game with pieces that curve and jump. It is unique, with two major innovations: its flicking techniques and the ‘box-in-a-box’ setup.

Ice Cool is a children’s game for 2–4 players ages 6 and up, and takes approximately 30 minutes to play… but you don’t have to be a kid to want to play this cool game.

Liberty! Equality! Eclairs!” The glorious revolution has done away with tyranny! Now you and your friends make up the Revolutionary Committee, overseeing justice throughout the land. Still, now that the Queen’s gone it would be a shame to let all that cake go to waste . . . Become the first among equals by amassing honor! Become happy by amassing cake! Send your friends’ pawns to the guillotine! First to forty cakes wins! From Peer Sylvester comes a game of committees, coercion and cake. Alliances and betrayal are all fair game as you try to amass as much cake as you can before the revolution collapses. 3-6 Players, Playing time: 45-80 Minutes, Ages: 12+ 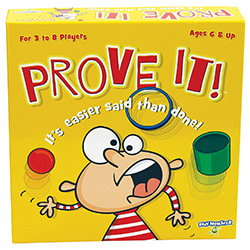 Bet who can do the task best, and then Prove It! There are four categories: Mad Skills (use your skill!), Know-How (use your noggin!), Fingers Crossed (it’s all about luck!) and Buddy System (teamwork!). For example, a card may read, “Bet how far you can launch a card, flicking it finger-football style!” Now the two competitors bet back and forth until one person ends the betting by saying “Prove it!”, and now the other player must perform the task to get the point! It’s fun for the whole family, but remember…It’s Easier Said Than Done! For 3 to 8 players ages 6 and up.

This Game is Bonkers 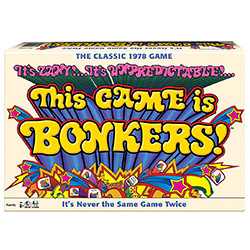 Inspired by the classic 1978 version, This Game is Bonkers will delight a whole new generation of fans! Players “build” a new track with each game so it’s never the same game twice. Your goal is to be the first player to score 12 points. It’s not as easy as it sounds. It may just drive you bonkers! 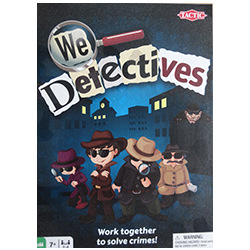 Put your team’s special investigation skills into play with Tactic Games’ cool new crime solving game, We Detectives. Designed for 3-8 players, ages 7 and up, We Detectives is a game where players try to work together to gather evidence, explore, and use deductive reasoning to solve crimes. Each player moves his or her playing piece around the city setting on the game board as they try to solve the case before the time runs out and the bad guys get away.

With some accommodating a small family and others a large one, we are sure you can find something on this list to meet your wish list needs  Heads-up that MOST of these games will be showing up in our 100+ Days of Giveaways so stay tuned. 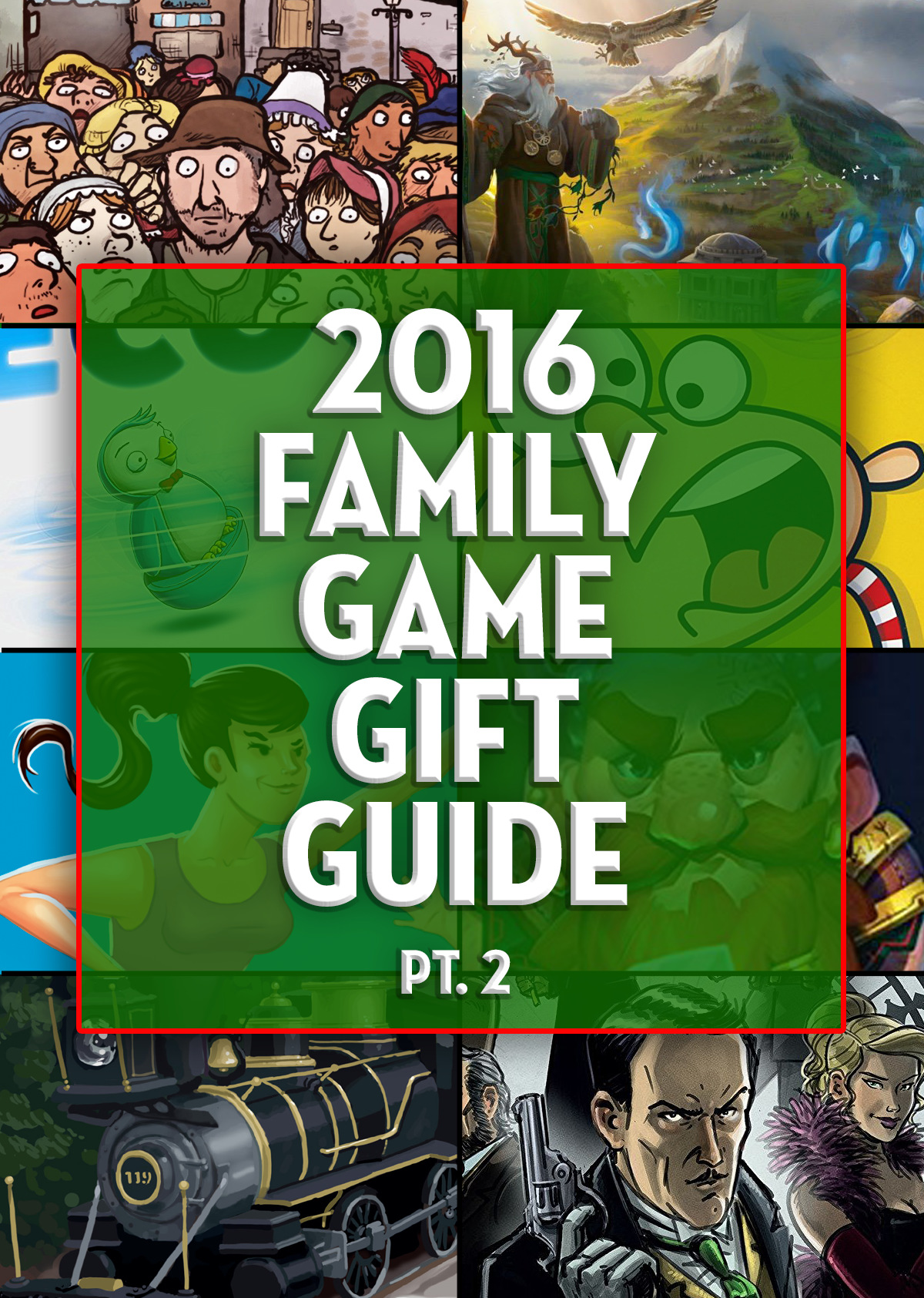