There’s been a mini trend happening in our house. We’ve recently stumbled across a couple games with similar mechanics, but all very different. It first started when we had a chance to play R&R Games’ Hanabi. Using a reverse-facing hand of cards, your team is tasked with building stacks of fireworks in numerical order, eventually lighting them as part of the annual Chinese New Year celebration.

About a month ago we took our copy of Beyond Baker Street by Z-man Games to a local gaming convention where it was met with great enthusiasm. Again, you’re holding a hand of cards that every else except you can see. By giving each other hints about what they hold, you work together to solve a Clue-like mystery before the man himself (Sherlock Holmes) can. Beyond Baker Street certainly turned up the difficulty dial over Hanabi, and thanks to the ability to increase or decrease the complexity, supplanted it in our weekly game bag. 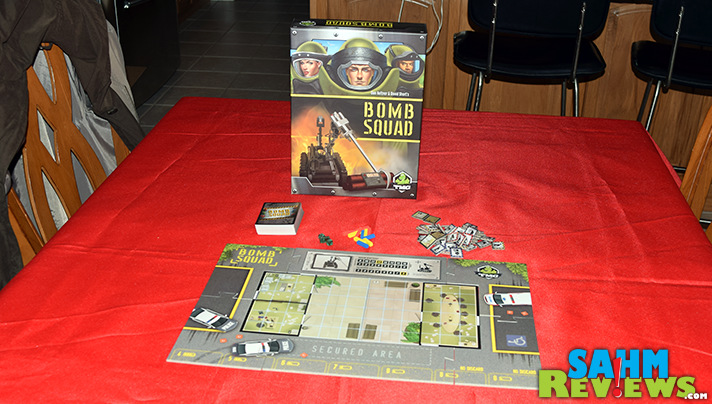 Now we’ve run across a not-so-new issue by Tasty Minstrel Games which also uses the hidden hand mechanic, Bomb Squad. If game hardness were measured on the standard Moh’s scale, Bomb Squad would be right up there between corundum and diamond! And I say this having only played the intro and first levels! (And failing miserably at both…)

So what makes Bomb Squad so different than Hanabi and Beyond Baker Street? First, there’s a ticking time bomb! Actually two of them, but one is more than enough to kill you and all of your teammates. To make matters worse, there’s a timer in the form of a free downloadable app (these are time bombs, they will explode!). And as if that’s not enough, the terrorists responsible for the bombs have also taken hostages and left them behind to perish in the explosion.

Your only hope is to send in a robot to disarm the devices and rescue the hostages. To do so, you and your team of up to five other players (Bomb Squad is designed for 2-6 people) must program the robot exactly to move to the correct locations and perform the exact actions needed to complete the tasks of disarming or rescuing. Sounds easy enough, right? The robot runs off of batteries, and every thing it does drains power. Careful management of cards (you may discard cards for additional power) is critical and you pretty much get only one shot at being successful.

We found this great live play-through video of Bomb Squad if you’d like to see exactly what to expect when playing (including yelling and anxiety)! They have left the sound of the app off, we recommend leaving it on for ambiance. Hearing that ticking bomb and audible warnings cranks up the nervousness you’ll experience quite a bit! But what makes Bomb Squad so great for us is the inclusion of a number of different maps and scenarios, as well as the ability to create your own random scenes. This gives Bomb Squad near-unlimited replayability!

If you’re fascinated by the whole “hidden hand” mechanic and want a game that is not easy to master, then Bomb Squad definitely fits that bill. I’m not kidding when I say we lost miserably the first few times we’ve played, even with hobby game veterans at Geekway to the West. A perfect title for those with a desire to assemble puzzles, it also teaches valuable programming logic in a way that you won’t realize you’re actually learning!

Find your copy on Amazon for under $25 or at your local game store. Tasty Minstrel Games has a couple exciting games coming out yet this year, so be sure to watch their Facebook and Twitter timelines for timely announcements. Hopefully we’ll be able to show them to you shortly here on SahmReviews!

Do you enjoy games with a timer?